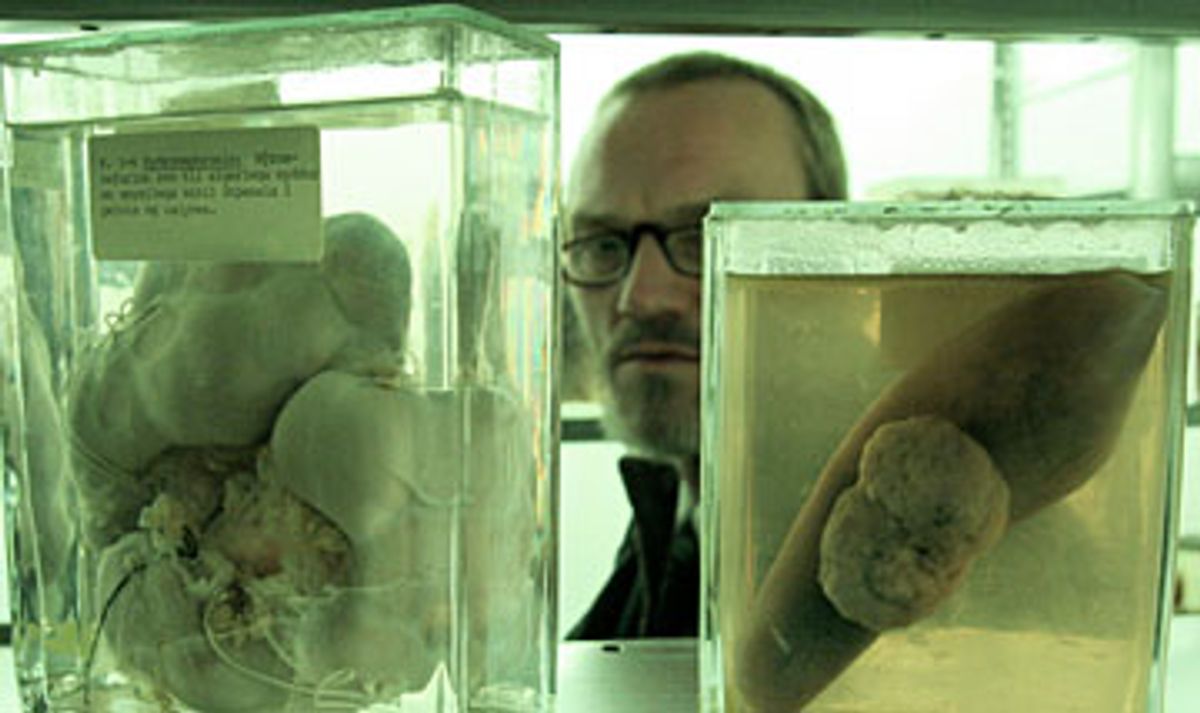 I meant to sneak in a late Friday review of "Jar City," a mordant, morbid police thriller with a laconic sense of humor from Icelandic writer-director Baltasar Kormákur that's getting a brief look at New York's IFC Center. That was before I spent my Friday night dealing with two sleeping children and a 4x4 stuck on a snowed-in road in the mountains of central New York state, not unlike a situation somebody in Kormákur's world might face. His Iceland is not a tourist-brochure exotic land of geysers and volcanoes, but a northerly outpost of postwar European architecture and American pop culture. Much of it looks like the drearier districts of Hamburg or Glasgow, but with that extraordinary treeless landscape, both beautiful and forbidding, in the infinite middle distance.

Similarly, "Jar City" takes archetypal elements of police procedural and slows them down to the speed of this strange and isolated country. When there's a brutal, clumsy murder in an outlying neighborhood of Reykjavik, everybody in the country hears about it, so bearded, depressed, chain-smoking detective Erlendur (Ingvar E. Sigurdsson) faces an entire nation of gossip and opinion. Erlendur's also got to figure out how the murdered man is connected to two young girls who died of rare brain disorders, 30 years apart, all while -- as everybody in the country also seems to know -- struggling to mend his own relationship with his drugged-out teenage daughter.

"Jar City" is comic, disturbing and affecting by turns, and often all at the same time. Its funniest scenes are also its most unsettling: There's a whole MacGuffin subplot involving the search for one of the dead girls' brains, which has been preserved in a jar at a medical research institution (hence the film's English title). In another scene, Erlendur's young and handsome partner (Björn Hlynur Haraldsson) has to walk around a provincial town, ringing doorbells and asking old ladies if they've ever been raped. The No. 1 murder suspect is a genuinely terrifying skinhead convict (Theódór Júlíusson), described by Erlendur as "the worst maniac in Iceland" -- but this being Iceland, he gets unsupervised weekend leaves from prison.

Like all classic detective fiction, "Jar City" is about the hold the past has over the present, which manifests itself here in various and surprising ways. Out in the audience, we figure out who the killer is much faster than Erlendur does, but Kormákur still has some plot twists to offer, and the story's real mysteries have more to do with love, loss and loneliness than with who finally put crusty old Holberg in his grave and why. Tremendously acted and shot with memorable confidence, "Jar City" deserves a much wider release than it's apparently going to get. You can catch it this week in New York, or look for it soon on IFC's pay-per-view network and on DVD.

What's new this week: I'll be in Austin, Texas, this coming weekend to sample all the odd and agreeable delights of this year's SXSW Film Festival -- three words: Harold! Kumar! Guantánamo! -- but let's not get ahead of ourselves. Before we get anywhere near that, there's another deluge of indie releases to contend with. The poor things, we can't love all of them! Tops on the dance card this week are Gus Van Sant's "Paranoid Park," which I saw at Cannes, and David Gordon Green's intimate drama "Snow Angels." (Look for posts on those shortly.) I think I'll let people who actually liked Ira Sachs' baffling period piece "Married Life" defend it without interruptions from me, and I haven't seen Frances McDormand and Amy Adams in the Brit-com "Miss Pettigrew Lives for a Day," Jason Statham and Saffron Burrows in "The Bank Job" or Stephen Chow's "E.T."-style family comedy "CJ7." (Stephanie Zacharek may cover some of those, and I'm sure she'll thank me for promising things on her behalf.) Ronald Bronstein's undistributed and perhaps undistributable "Frownland," something of a cause célèbre among critics, is opening in New York micro-release, as is the all-but-forgotten '40s British melodrama "It Always Rains on Sunday" and the self-descriptive doc "Girls Rock!" If I get too swamped to write anything further, those are worth catching. I'll try, Lord, I'll try.

Beyond The Multiplex Iceland Movies Thrillers