After a lifetime of competing with his father, writer David Shields has had enough. But the aged patriarch remains "cussedly, maddeningly alive." 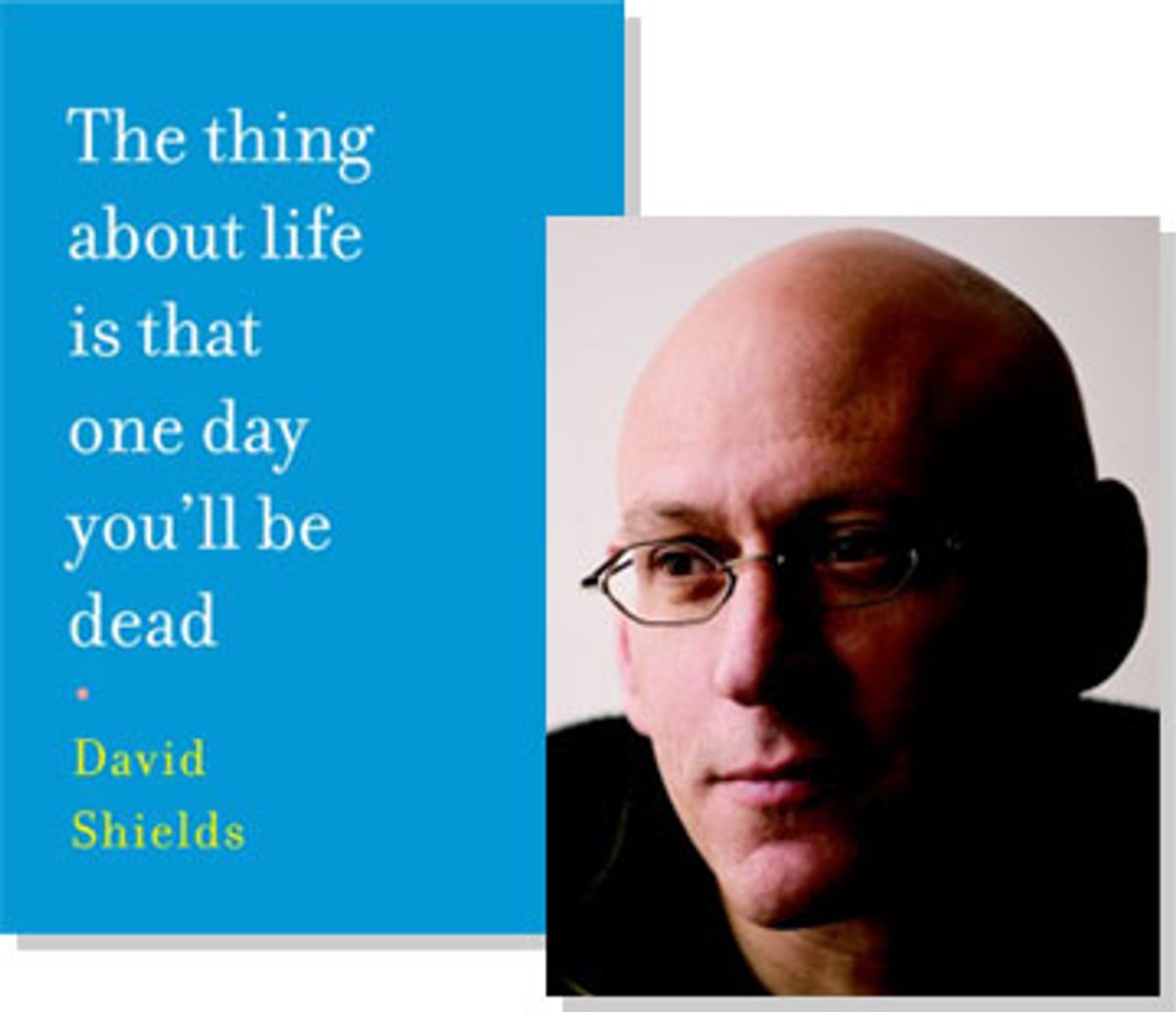 "Most things may never happen," wrote Philip Larkin. "This one will."

If you think that about covers the subject of death, you haven't reckoned for the indefatigable morbidity of essayist-memoirist David Shields. Death, for him, isn't Larkin's "small, unfocused blur" but something to be pored over through a microscope, down to the smallest grain. He's looked long, and he's looked hard, and the news isn't good.

Start with that bulletin of a title: "The Thing About Life Is That One Day You'll Be Dead." Not only that, but chances are good you're already dying. Strength and coordination, Shields tells us, peak at 19. Arteriosclerosis can kick in at 20, which is also when your joint function begins to decline. Hormone production begins to ebb at 25; bone mass tops off at 30.

Getting the picture yet? No? Well, there's more to come because "The Thing About Life" is a veritable Harper's Index of loss: statistic after statistic, lighting the way to dusty death.

Smell, hearing, fingernails, hair ... going, going, gone. Every year, your maximum heart rate drops a beat and your height drops one-sixteenth of an inch. Skin dries up, organs shrink. After 40, grip strength declines; at 65, aerobic capacity is down 30 to 40 percent; at age 90, half your kidneys' blood-filtering capacity is gone. If you're a man, you'll have lost roughly 15 percent of your total mineral density by the time you're played out. For women, the figure is 30 percent.

And what about the package of gray cells that's overseeing all the carnage? Dwindling, too. The brain peaks in size at 25 and, once it passes the mid-century mark, loses 2 percent of its weight for every decade. If you're fortunate enough to reach 90, your brain will be the size of a 3-year-old's.

And there's not a thing to be done about it. Despite all the claims of skin-cream salesmen, aging isn't a disease, Shields says, but a built-in obsolescence. Our bodies are vehicles for procreation. When they can no longer serve that end, they shut down like abandoned power grids.

None of this exactly qualifies as news; nor does it qualify as uplift. By rights, "The Thing About Life" should go straight to the bottom of your bedside table stack, next to that Jacques Barzun slab you've been meaning to get to. In fact, this is a darting and even breezy read, rigorous when it needs to be but also wry and dryly tender. And, more than anything else, confessional. For Shields is obsessed not just with Death but with death. His own, of course, and most particularly his father's.

And so, interlaced with all the mortality data is an affecting, if unconventional, family memoir that uses death as the filter for examining past ties and present entanglements. Time, it appears, is running out for the Shields patriarch -- but maybe not fast enough. With customary directness, his son asks: "Why do I want to cover my dad in an early shroud? He's strong and he's weak and I love him and I hate him and I want him to live forever and I want him to die tomorrow."

Except his father doesn't want to die tomorrow. Or ever. Which makes him a source of eternal vexation.

Once "a Jewish prince," Milton Shields is still king of his private jungle. "He's held more than fifty jobs in journalism and public relations and social welfare," his son writes, "been fired from many of them, been plagued by manic depression for fifty years, been hospitalized and received electroshock therapy countless times, is a genius at loss." And yet he is "cussedly, maddeningly alive," the kind of guy who exercises twice a day and gets out of the car during family trips to do 100 jumping jacks on the roadside. At 86, he has a heart attack during a tennis match and keeps playing. At 97, he still swims most days and, weather permitting, adds a track circuit to his regular gym workout.

"The most vigorous person I've ever known," says his dazed son, who, at 51, is hobbled by a bad back, a trick knee and tendinitis in the shoulder, and who goes to sleep "with a night guard jammed between my teeth, a Breathe Right strip stretched across my nose (to mitigate snoring), and a pillow tucked between my legs. I walk around with an ice pack stuck in one coat pocket and a baggie of ibuprofen in the other."

None of this stops him from waging an unspoken and lifelong competition with his father. The Freudian nature of this contest has not escaped him: "The length of my penis is 6" (boringly, frustratingly average); I've measured it several times. My father, though much smaller overall than I am, is, I'm pretty sure (glimpsed discreetly), markedly more well-endowed. No wonder he used to be such a sex fiend."

Readers of previous Shields works like "Body Politic" and "Black Planet" know that his preferred field of reference is sports. No surprise, then, that this father-son conflict is framed through games: Dodgers losses, high-school basketball triumphs. And arm-wrestling matches, which Papa Shields is still winning halfway into his 60s. Even in dreams, the father outpaces the son.

The only thing on the younger man's side, finally, is time, and it is with some mixture of gratification and despair that David discovers his father to be mortal after all: tottering in the shallow end of the pool while his son does laps and flip turns.

Shields' prose has an easy gait, but he gets at something hard and thorny: the ways in which some of us need our parents to die even as we recoil at the prospect. And the ways in which our bodies deny the reality of their own extinction. Milton Shields, after all, still hopes to be a centenarian, still jumps in that swimming pool day after day. He's in a peculiarly modern bind: The life impulse has outlived the life.

My own father was, like Milton Shields, bipolar and absurdly vigorous. He ran his first marathon at 52, and at 70, was jogging, biking, playing tennis, doing sit-ups on the living-room carpet. Ten years later, his brain smogged by beta-amyloid plaque, he was a stooped and shuffling man: glum, incontinent, virtually bedridden. And yet there was never a point when he wanted to cut the thread, and he persisted doggedly in life's offices: scrutinized his stool, ate everything you put in front of him. I stroked his hair the last time I saw him, and it seemed to me that his follicles luxuriated in my touch, that they were still buzzing when I left the room. Till the end, against all odds, life was at work in him, toiling alongside death.