Her campaign is nervously optimistic, but she faces a daunting delegate map -- and perhaps forces beyond her control -- in the race against Obama. 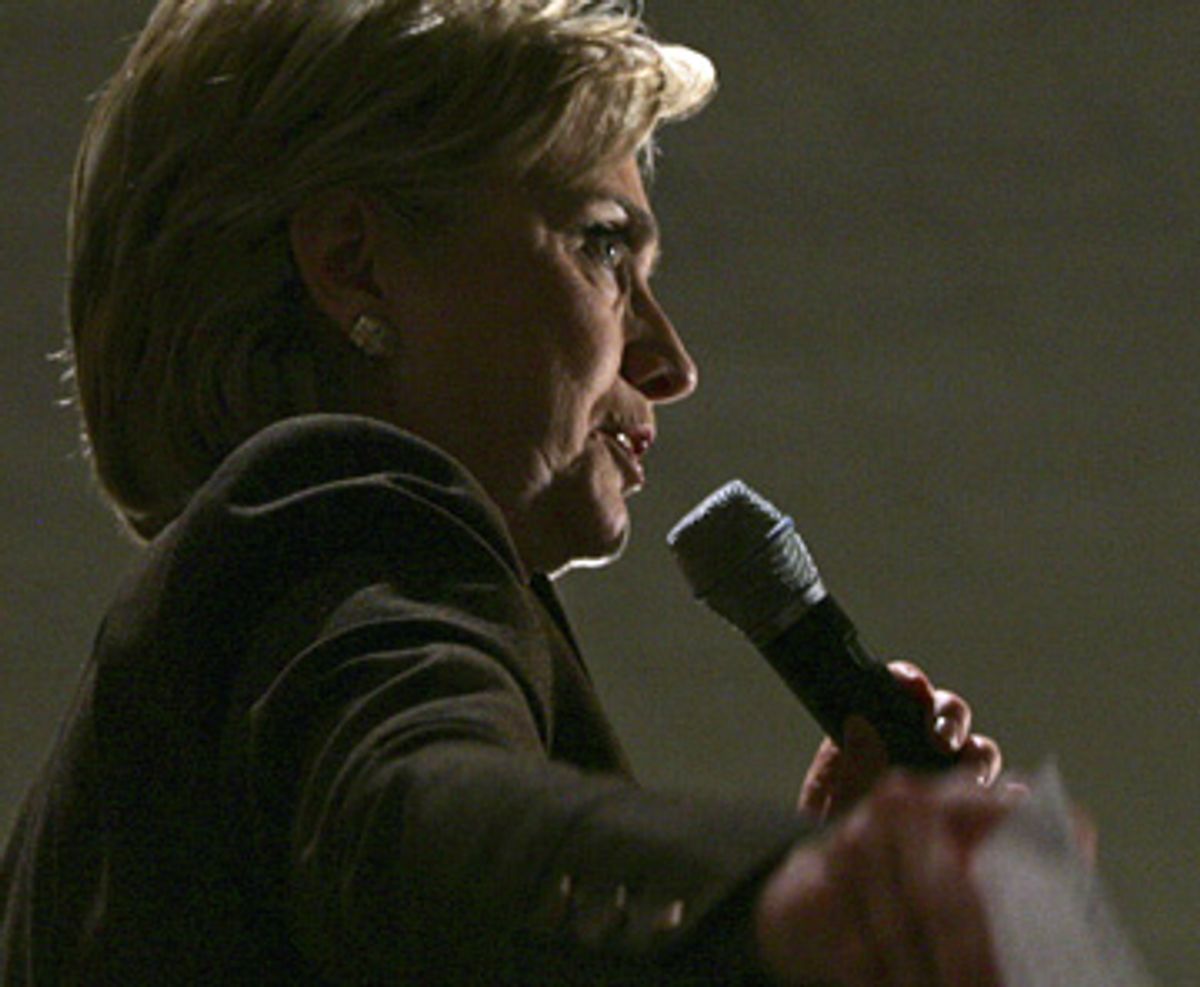 As the Democratic mayor of Ohio's capital and largest city, Michael Coleman is accustomed to being on the front lines of presidential politics. He jokes that George W. Bush and John Kerry were in Columbus so often in the fall of 2004 that they should have paid local taxes. "But we've never been a primary state," he said Monday. "We've always been a general election state."

Tuesday, as a reward for not moving up its political calendar, Ohio is being treated to its first hotly contested Democratic primary since 1984. With 141 pledged delegates at stake, Ohio is back to cavorting onstage in its familiar role as the Maker of Presidents. Or, in the case of Hillary Clinton, as the potential un-maker of a would-be president. This is where the New York senator will be making her stand, as she will be holding her primary-night rally here in Columbus. (Barack Obama will be in Texas at the other end of the big-state daily double.)

The Clinton campaign sounds nervously optimistic, about Ohio at least. "A week or so ago, the race sort of stabilized," said first-term Democratic Gov. Ted Strickland, who endorsed the former first lady shortly before the Iowa caucuses. "Sen. Clinton has been able to hold on to a lead. I don't know how big it is. She's going to win Ohio." A flurry of seven separate Ohio polls came out Tuesday, and Clinton holds mostly narrow leads in six of them. Trusting the polls has proven to be a mug's game throughout the 2008 primaries and, with cold rain forecast for most of the state Tuesday, neutral political handicappers are more willing to go with their hunches that it will be a close race between Clinton and Obama.

But probably not in Columbus (the home of Ohio State University) and the rest of central Ohio, which is unmistakably Obama territory. Coleman, a three-term African-American mayor in a city where blacks make up only one-fifth of the population, was the first major Ohio political figure to endorse Obama. As the Columbus mayor put it, "I think the demographics of central Ohio and Columbus fit perfectly the coalition that Barack has put together. This unique coalition is bringing in the young folks, bringing in the African-Americans, and bringing in the independents." In Ohio's open primary, where there is little drama on the GOP side with John McCain's coronation, Coleman predicts that "in this city a lot of Republicans are going to vote for Obama."

Chris Redfern, the Ohio Democratic chairman, who is neutral in the race, said, "The primary is not a geographic thing but a demographic thing. The blue-collar, ethnic Roosevelt Democrats are staying with Hillary Clinton because the Clintons are what they've known for the last 16 years." In contrast, he said, Obama is attracting "the younger voters. Not necessarily younger in terms of age, but also younger in terms of their involvement in the process. Maybe they have been voting in just one or two elections up to now."

But what is daunting for Clinton with the Ohio map is the way in which 92 delegates will be selected according to the results in the state's 18 congressional districts. The proportional weighting does not work in her favor. Four Cleveland-area Ohio congressional districts -- where Obama is expected to rack up landslide margins -- account for 27 delegates by themselves. Clinton, meanwhile, spent an entire day last week in Strickland's old congressional district in the southeastern corner of the state, trying to win in a pocket of Appalachia where the best possible outcome for her would likely be a margin of victory that gives her three delegates to Obama's two, netting her just a single delegate gain in that district's race.

Even with 49 of Ohio's delegates allocated on the basis of the statewide popular vote, most political experts find it hard to come up with a scenario under which Clinton, even if she wins Ohio, will gain more than a dozen delegates in the overall primary race. By most measures she is behind in the race by roughly 100 delegates.

Outside of Columbus, which is probably the nesting ground for more construction cranes than the rest of the state put together, Ohio is mired in the economic doldrums. That is probably the reason Clinton aired her 3-in-the-morning red-phone national-security commercial in Texas but not in Ohio. Rather than shadowy terrorists, Democrats here tend to regard NAFTA as the major foreign threat. When Obama attacked Hillary for tardiness in seeing the danger to American jobs from this signature Bill Clinton trade agreement, Strickland confessed that he was initially nervous about losing votes in Ohio. But the governor added, "I think she counterpunched very well, so I don't think that it had the detrimental effect that it could have had. She's tenacious. She's a fighter."

But there is a sense that even in old-shoe Ohio, Clinton may be imperiled by forces beyond her control. Explaining why he endorsed Obama, Coleman, who briefly attempted to run for governor himself in the 2006 race, said, "Ohio was losing thousands of jobs, poverty rates had gone through the roof, and people were feeling pretty doggone desperate in my state. I was feeling that the Iraq war was going to play in a major way and Hillary had voted for it. And I said that this nation has swung and the institutional Democrats have yet to recognize that. At this grass-roots level, I sense it and I feel it. And an inspiring motivating visionary leader like Barack Obama could relate to this change that I was feeling at the grass-roots level."

But if there is an Obama rhapsody in the air, the 66-year-old Strickland insists that he cannot hear it. "I'm a psychologist," said the governor, referring to his earlier calling. "But I don't have any insight into human behavior, I guess. I have stepped back and I have watched Barack Obama, and I have tried to make myself experience what so many other people seem to experience when they hear him. And it just doesn't affect me in the same way ... I have had friends say to me, 'I just have this feeling, literally. I have this feeling.' And I think, 'I'm not sure that's healthy.' We're not trying to choose the next winner of "American Idol." We're engaged in the serious work of electing the next president."

That is the local specialty -- electing the next president. And it is here, as well as in Texas, where the voters Tuesday will decide whether Hillary Clinton survives to fight another day. For to update Harry Truman's signature line: In presidential politics, the Buckeye stops in Ohio.