The numbers crunch Hillary in Texas

Late polls show a tight race between Obama and Clinton, but even if Clinton pulls out a popular-vote victory, the delegates will probably go to her opponent. 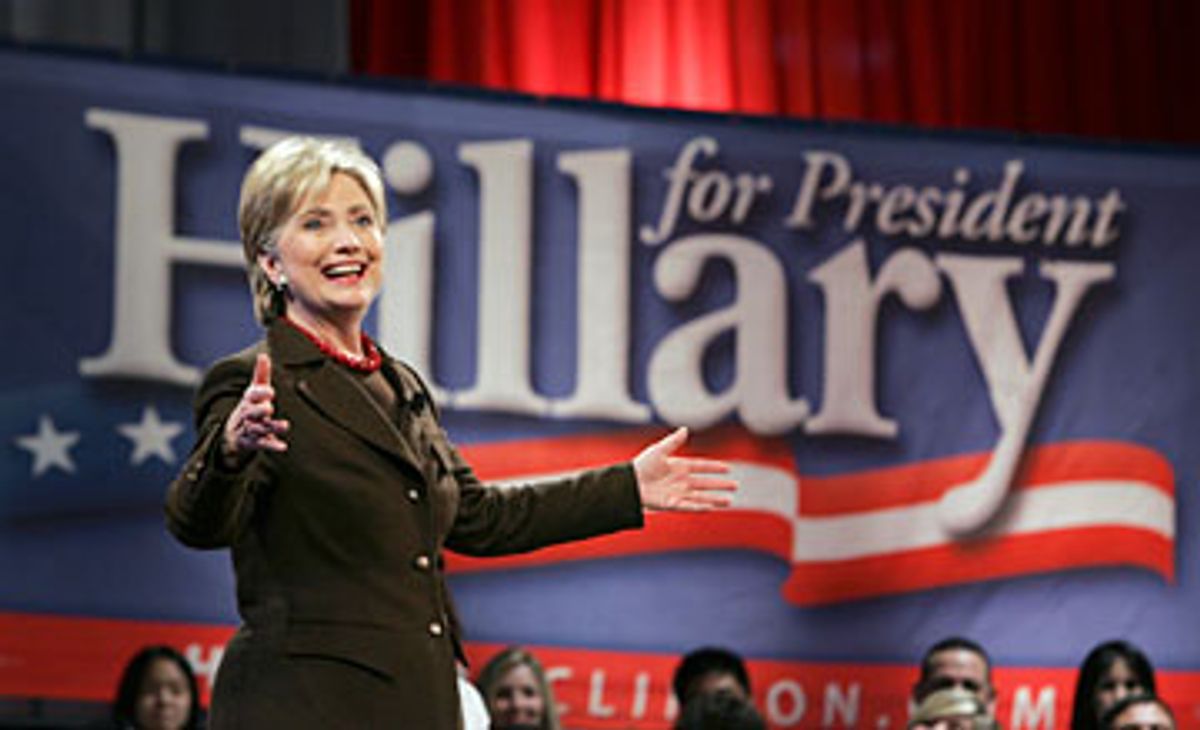 It certainly made for an unusual lead-in to the Houston Astros spring-training game on Fox Sports Southwest Monday night: Hillary Clinton taking questions on healthcare, the war in Iraq and the minimum wage from almost 800 Texas voters on a sparse set at a downtown convention center, with Eva Longoria moderating. Maybe baseball dads are this year's soccer moms? ("The views expressed on this program do not represent the views of Fox Sports Net," a voiceover informed viewers immediately afterward.)

Squeezed between "Spurs Insider" and the baseball game, Clinton's "Texas-Size Town Hall" and a subsequent rally a few miles out of town were among her final gambits in a state where her double-digit lead turned into an apparent edge for Obama and now, in late polls, a dead heat. Her strategists, and her husband, once said she had to win here in order to continue her campaign for the White House. By Monday, the Clinton camp had settled on a new line -- she doesn't have to win here, but she will.

Even so, by Tuesday night, she'll be safely ensconced in Ohio, the other big prize up for grabs. She may have chosen to head north because her odds of beating Barack Obama in Ohio are better than in Texas -- or because even if she does win the popular vote here, the Democratic Party's baroque mathematics will probably make Obama the winner anyway.

Texas apportions delegates via a complicated system that gives Obama's voters more say than Clinton's. About two-thirds of the state's 193 delegates are awarded state Senate district by state Senate district. The delegates in each of those 31 districts are divvied up according to the popular vote within the district. However, those districts that reliably vote Democratic have more delegates. African-American areas in the big cities, and the liberal enclave of Austin, both likely to be Obama strongholds, have the most delegates. Latino areas along the border, which will probably favor Clinton, have somewhat fewer. The votes of those rural whites who support Clinton will have the least weight because they live in red districts. Unlike states such as Ohio, Texas does not give a lump-sum prize to the winner of the statewide popular vote.

After the polls close, at 7 p.m. CST in most of the state, 7 p.m. MST in El Paso, the day's second act begins. And it too seems to favor Obama, who is more popular than Clinton with the party's activist base. Sixty-seven of the state's delegates are apportioned via caucuses that take place in polling places after the primary voting is done.

Still, Clinton's televised town hall, starring local hero Longoria, Miss Corpus Christi 1998, was a last-ditch effort to reach voters in places so out of the way that the campaign couldn't physically swing through in the closing hours. It wound up on Fox Sports, not the kind of cable network known for its pull with Hillary supporters, in part because the time was cheap. The relatively flush Obama campaign put a two-minute commercial on the air Sunday and Monday nights on local newscasts all around the state.

The rally afterward was your standard election eve, get-the-vote-out affair, though the location of the press filing center -- a locker room, with some reporters working directly in front of a row of urinals -- may have been a sign that the Clinton campaign has truly become fed up with the media's treatment of the candidate. The crowd, older than at Obama's events, didn't quite get into the peppiest cheers the warm-up acts led ("H-I, H-I-L, H-I-L-L-A-R-Y, Hillary, our nominee," a complicated singsong number with lots of clapping, fell particularly flat). But when Clinton strolled onstage with Chelsea Clinton and Ted Danson in tow, the room lit up; it didn't feel as though her campaign was in danger of ending Wednesday, despite her 11-election losing streak.

Clinton stuck to a theme the campaign thinks has -- finally -- started to get through to voters: Compared to her, Obama simply isn't up to the job. "Tomorrow, the voters of Texas get to have your voices and your vote heard as to who you think should be the next president of the United States," Clinton said. "Who would you hire to answer that phone in the White House when it rings at 3 in the morning?" Ads with the same message are on the TV and radio, and Clinton aides believe she's recovering some voters who had flipped to Obama.

But even so, the size of the crowd may have been a warning sign. Clinton drew an estimated 3,800 people, according to her campaign; Obama pulled in about 20,000 for a rally downtown 10 days ago. And his campaign was also pushing hard to the finish. "Assume that we're behind," Michelle Obama told volunteers at her husband's University of Texas campus headquarters here Monday afternoon, where giant pop-art posters of Obama had been decorated with peppy collegiate slogans in chalk ("Hook 'em for Hope!" one read). "Work as if your life depended on it. Believe that if we don't get it done here in Texas, it may not happen -- so we need to work." Obama's army of volunteers knocked on 300,000 doors over the weekend and made more than 1 million phone calls around the state in the last few weeks, the campaign said.

The decision in the popular vote will come down to turnout and whose voters show up. Both the GOP and the Democrats are holding primaries Tuesday; early voting, which ended Friday, was way up -- and trending Democratic. In Collin County, a large jurisdiction in the Dallas suburbs, George Bush won almost 72 percent of the vote in 2004; this year, 10,000 more early voters have cast Democratic ballots than Republican ballots, and nearly 13 percent of the county's registered voters have already turned out. "Democrats are coming out of the woodwork," said Dan Dodd, the county party chairman. "You got two people running neck and neck -- it hasn't happened in years."

Areas that weren't competitive a few weeks ago, when Clinton held a comfortable lead in polls, have turned into battlegrounds. "They're both hot and heavy right now," said Carla Vela, the Democratic Party chairwoman in Bexar County, which includes San Antonio -- a majority-Latino city where Obama chose to hold his election night party, skipping over places like Dallas or Houston with larger black populations. "He wasn't that well known in the Hispanic community -- and now he is," Vela said. Like Dodd, she hadn't endorsed either candidate and wouldn't venture to say who was ahead.

No matter what the results are, though, no one seems to know how they'll be interpreted. The polls hadn't even opened, much less closed, when the Clinton camp started -- again -- trying to discount Obama's wins in caucuses so far this year. (If Obama comes out of Texas with a big chunk of the state's delegates, it's likely to be because he does well in the caucus portion.)

"When we have large numbers of people voting, like we did in New York and Florida and California, we do better," Clinton spokesman Howard Wolfson said Monday. "In caucuses, where there are fewer people voting, Senator Obama has tended to do better. November of 2008 against John McCain is going to be an election, not a caucus." Chief strategist Mark Penn was even more explicit: "I would question the viability of the nominee whose support is based so much on caucuses in states like Alaska and Idaho."

But after refusing to make predictions, Wolfson did exactly that, which could complicate his job if Clinton doesn't win here. "I am superstitious about actually making declarative predictions," he said. "But I think there'll be no question that we will be the successful campaign on Tuesday." He dodged questions about what would happen if she lost.

Obama's pre-election tactics weren't much less jumbled. Campaign manager David Plouffe told reporters it would still be a win for Obama if Clinton won the popular vote in both Ohio and Texas, since she'll still be trailing in delegates no matter what: "It's less about the states than it is about the delegates." That may be true, technically, but a sweep of both big states would clearly swing some momentum back to Clinton, very definitively prolonging a race that Obama's strategists have been hinting -- more and more aggressively -- should have been over for some time now.

So in the end, Texas may not decide anyone's fate after all. Clinton appears poised to continue even if she loses the popular vote here, as long as it's close and she pulls out a win in Ohio. Obama, meanwhile, would claim victory even if he lost the popular vote and built on his delegate lead. Surely, the Democratic campaign for president will end at some point. It's just getting harder to say exactly when.