It ain't over yet

Victory is sweet for Clinton after 11 losses, but the path to overtaking Obama in the delegate count is still far from clear -- and could lead back to Florida and Michigan. 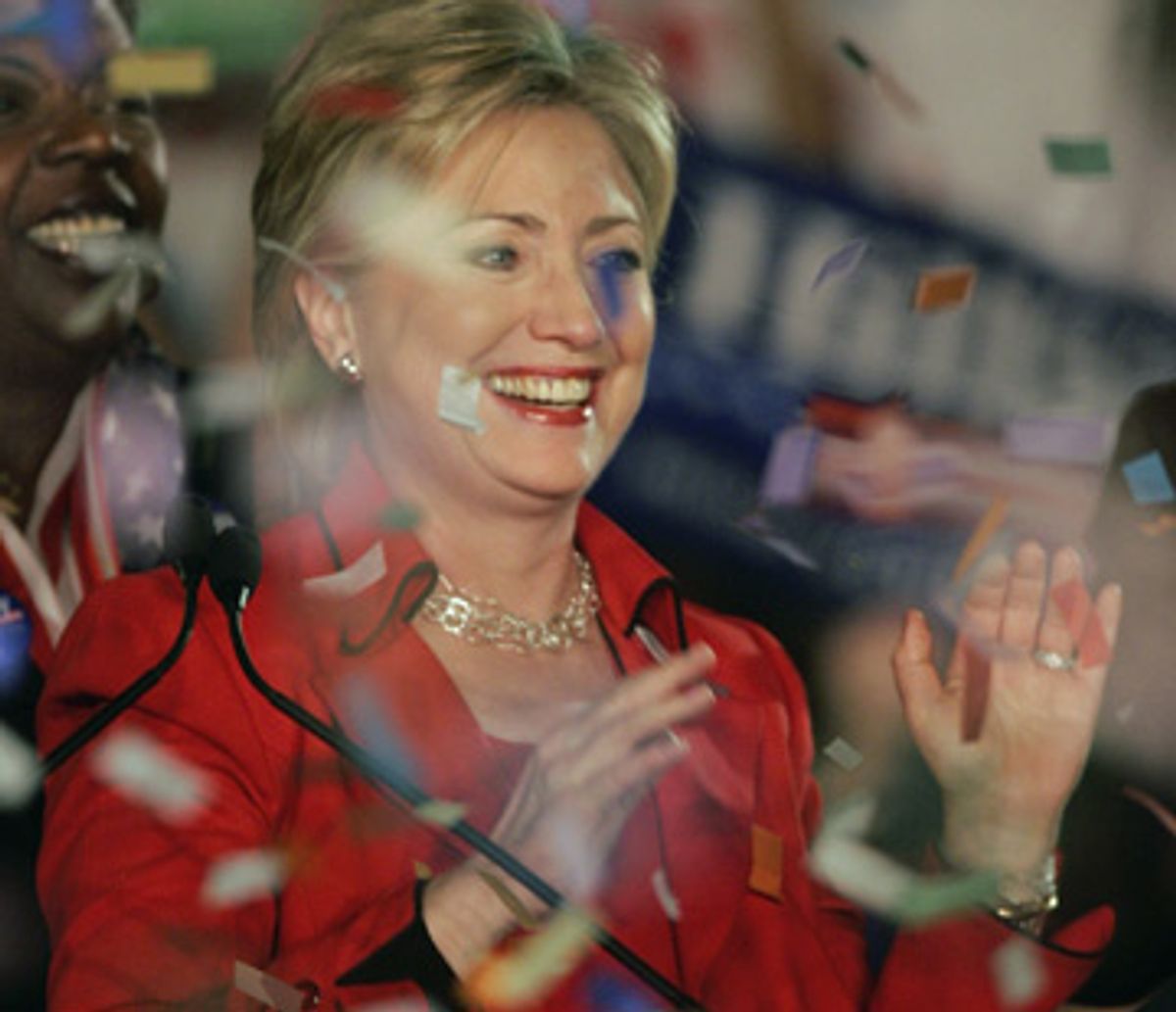 The confetti cannons that bathed the Columbus Atheneum in a rainbow of tiny pieces of plastic made it seem as if Hillary Clinton was onstage at the Denver Convention basking in her presidential nomination. But her victory celebration after winning the Ohio primary by more than 200,000 votes signified something almost as momentous -- her survival as a long-shot presidential challenger to Barack Obama.

Like a radio disc jockey dedicating a song to all the lost and lonely, the New York senator took the stage to declare in a run-on sentence constantly punctuated by applause, "For everyone here in Ohio and across America, who's ever been counted out but refused to be knocked out and for everyone who has stumbled but stood right back up, and for everyone who works hard and never gives up, this one is for you."

Until she rebounded Tuesday with double-digit victories in Ohio and Rhode Island -- and an important but narrow victory in the Texas primary -- Clinton had put together a primary and caucus losing streak reminiscent of Charlie Brown's comic-strip baseball record. But with the results of the chaotic post-primary Texas caucuses still in doubt, Clinton ends the evening about 90 delegates behind Obama (different media organizations have different counts) with only a dozen contests left on the political calendar. And that is counting Guam. Even if the former first lady has again found her way after spending most of February in the wilderness of defeat, she has little time left to take advantage of it.

Still, Clinton may have bought herself a week without anxious Democrats checking her vital signs. Over the last two weeks, the Hillary "death watch" had begun to rival the protracted final illness of a certain Spanish dictator. In 1976, during the first year of "Saturday Night Live," Chevy Chase made a comic shtick out of dramatically announcing every week during the "Weekend Update" mock newscast, "Generalissimo Francisco Franco is still dead."

Long before Ohio or Texas had any meaningful returns -- and the exit polls suggested that the race was knotted -- Terry McAuliffe, Clinton's top fundraiser, was insisting to reporters, "We're going to have to go through the process until we get to Puerto Rico on June 7." Ohio Gov. Ted Strickland, who had been Hillary's unstinting champion throughout the primary, made a similar plea as he spoke before Clinton at the rally, "Let her continue this fight. Let's go on to Pennsylvania and West Virginia. And let's go to Michigan and Florida."

Strickland's political map was intriguing. Pennsylvania, which holds its primary April 22, is indeed slated to be the last major state to weigh in. But Strickland pointed to the road to salvation for Clinton when he invoked "Michigan and Florida." These two states held outlaw primaries in January (which Clinton carried), but these contests have not been recognized by the Democratic National Committee because they violated party rules on scheduling. The magic number of delegates needed to secure the nomination (2,025) has been calculated without counting the 366 defrocked delegates from Michigan and Florida.

The Clinton campaign has stubbornly, ineffectively and a bit duplicitously argued that the Michigan and Florida results should count, even though Obama was not even on the Michigan ballot and all Democratic candidates pledged not to campaign in these states. As Clinton spokesman Doug Hattaway reiterated Tuesday night, "Sen. Clinton has consistently favored seating those delegates." But Strickland's remarks to the rally -- and some hints from McAuliffe earlier in the evening -- suggest that the next Clinton position may be to appeal to the party to encourage these two pariah states to hold some type of do-over caucus or primary.

The Florida and Michigan question is central to Clinton's lingering wishing-and-hoping dreams of snaring the nomination. If the 366 delegates from these two states were somehow again in play, the daunting arithmetic that makes it almost impossible for Clinton to pass Obama in pledged delegates would be far more forgiving. Even after her double-barreled Ohio and Texas primary victories, Clinton still faces the risk of a stampede of unpledged superdelegates to Obama. That is why her campaign, which has taxed the limits of logic and consistency as it has flailed about in recent weeks, must win the "spin wars" of the next few days and convince the more than 300 still neutral superdelegates to stay on the sidelines.

The Ohio exit polls, for the most part, reflected the divisions that have characterized the Clinton-Obama race so far. The age breaks were lock-step precise with Clinton rising and Obama falling as each of the six age cohorts became progressively older. Obama won the youngest voters (those 17-24) by a landslide margin of 75-to-24 percent. Clinton, on the other hand, racked up an almost equally lopsided 70-to-29 victory among voters eligible for Social Security. In summary, the 46-year-old Obama carried voters younger than he is (those 17 to 45), while Clinton won those who are older.

Whatever her intentions had she lost Ohio or Texas, it is now clear that Clinton will not go quietly into the night. Strickland, who encouraged Clinton to campaign heavily in rural Ohio (she won these voters by a 70-to-26 percent margin), made his feelings abundantly clear in a phone interview Monday. Speaking on the assumption that Clinton would win Ohio, the first-term governor lambasted Obama supporters like John Kerry and Ted Kennedy for suggesting that Clinton should withdraw if she did not come out of the Tuesday primaries with a delegate lead. "John Kerry's not in a position to make a political judgment about Ohio or any other state," Strickland said with an edge of anger in his voice. Talking about Kennedy, whom he did call a "great senator," Strickland recalled that in 1980 the Massachusetts liberal carried his battle against incumbent Democratic President Jimmy Carter to the floor of the convention -- and then only reluctantly endorsed his rival at the last minute. As Strickland put it, "Now for him to start lecturing Hillary Clinton about party unity and what it takes to win in November ... offends me."

When more than 20 states clustered their primaries and caucuses on Woozy Tuesday Feb. 5, there was concern that the Democratic race would end too soon, leaving the nominee with nearly seven months to contemplate a running mate before the Denver Convention. Now with Hillary Clinton's dramatic return from oblivion, it is likely that the presidential candidates will, at minimum , spend the next seven weeks making Pennsylvania Democrats feel like the most important voters on the planet. About the only slogan that makes sense in the wee hours of Wednesday morning is: "It ain't over 'til it's over."