No Texas-size victory for Obama

With its caucusing chaos and escalating spin wars, the contest in the Lone Star State ensured one result: The Obama-Clinton showdown will continue. 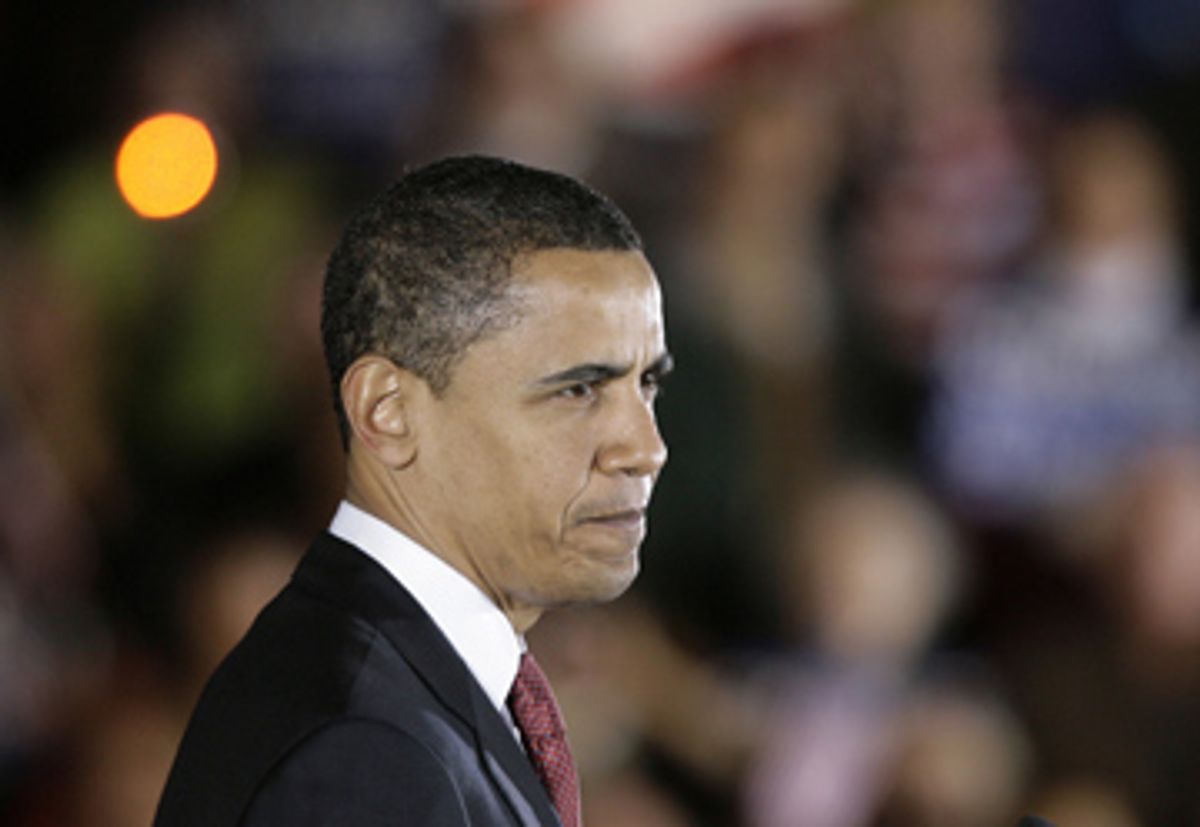 Texas, in the end, decided to mess with Barack Obama.

Defeated by Hillary Clinton in the popular vote here Tuesday, as well as in Ohio, Obama missed what many believed was a chance to knock Clinton out of the race for the Democratic presidential nomination. Even though Obama will probably end up winning more delegates than Clinton in the Lone Star State once all the results are tallied up, the initial outcome showed that ending the race won't be easy -- it could go on for many more weeks.

Even after losing three out of four states Tuesday (Clinton also won Rhode Island, while Obama took Vermont), Obama still claimed the night as a victory. "No matter what happens tonight, we have nearly the same delegate lead as we did this morning," he told a crowd outside the imposing Municipal Auditorium, down the block from the Alamo. "And we are on our way to winning this nomination." That set off chants of "Si, se puede!" (an equivalent of "Yes we can!"), which Obama -- who lost in part because he couldn't hold down Clinton's wide margin among Latino voters -- repeated himself.

From there, he focused on the general election. "In the weeks to come, we will begin a great debate about the future of this country with a man who has served it bravely and loves it dearly," he said, referring to John McCain, who officially clinched the GOP nomination Tuesday night. "John McCain may claim long history of straight talk and independent thinking -- and I respect that -- but in this campaign, he has fallen in line behind the very same policies that have ill-served America. He has seen where George Bush has taken our country, and he promises to keep us on the very same course."

Obama then linked McCain with Clinton -- saying both long-time Washington insiders have made the same arguments against Obama's campaign. "John McCain and Hillary Clinton have echoed each other, dismissing this call for change as eloquent but empty, speeches not solutions," he said. "And yet they know, or they should know, that it's a call that did not begin with my words. It began with words that were spoken on the floors of factories in Ohio and across the deep plains of Texas, words that came from classrooms in South Carolina and living rooms in the state of Iowa, from first-time voters and lifelong cynics, from Democrats and independents and Republicans alike." The message, directed at either opponent, was clear: Get out of my way, I've got a broad and unstoppable movement behind me.

But first, Obama has to deal with Clinton's renewed lease on political life. As the night dragged on without much clarity in the way of results in Texas, the spin battle was already well underway. Clinton aides, hoping to cast doubt on a caucus they were expecting to lose, accused Obama supporters of locking voters out, illegally signing caucus sheets and removing caucus packets from the polling places too early (which, the Clinton camp pointed out, the state party said would "amount to criminal violations"). Obama's aides retorted that they had nothing to do with any irregularities. Obama's lawyer, Bob Bauer, muscled in on a Clinton conference call with reporters to argue that the Clinton campaign had been denigrating caucuses throughout the race.

Because of complicated delegate math in Texas -- where areas that have traditionally voted Democratic get more delegates, and where a third of the state's delegate haul is awarded in the caucus -- Obama's team emphasized going in that he would probably win the fight for delegates, no matter what happened with the popular vote. "It's all about delegates," Obama's chief strategist, David Axelrod, told reporters. "They said they were going to wipe out our delegate lead tonight. I don't think it's going to change materially."

Even after Tuesday's losses, Obama still leads in the national popular vote. He has also won more states than Clinton nationwide to date. But Clinton has won the popular vote in most of the big states -- and her win in Texas exposed some flaws in Obama's recent posturing as the inevitable nominee.

Although Obama outspent Clinton heavily in Texas, on TV and in grassroots organizing, it was a last-minute Clinton attack ad that may have made the difference. She won among late deciders, who swung to her in droves over the weekend after her campaign questioned Obama's readiness to be commander-in-chief with a hard-hitting ad about late-night emergency phone calls to the White House.

Clinton won the white vote and the Latino vote, and she won among women, apparently returning the race's demographic battle lines to where they were before Wisconsin's primary, when Obama seemed to be cutting into Clinton's base. (The Clinton campaign focused heavily on Latinos in Texas; Bill Clinton called into a San Antonio station playing rock en espanol at 6 p.m. to urge listeners to vote, with hardly any time left to do so. The DJs were still chattering about the call -- in Spanish -- an hour later.) And Clinton routed Obama among voters who felt experience was important -- a point the Clinton campaign will no doubt continue to highlight as important in a general election fight against McCain.

Still, the pending caucus results from Texas most likely will work to Obama's advantage. His campaign worked hard to get voters to come back in the evening for the caucuses, handing out flyers at precincts with caucus instructions on them as voters trickled in all day. The best tickets at the San Antonio "victory" party were reserved for people who attended their local caucus. But some of Obama's supporters were hoping for more forceful results. "I'd hope to see him win the popular vote," said Jerry Haddican, of Austin, who works for a Democratic state legislator. "I'd like to see him carry Texas, and carrying Texas, to me, is having more people take time out to vote for you."

Despite the finger pointing by both campaigns, the chaos with the caucuses didn't seem to favor one side or the other -- they were just a mess. At Wetmore Elementary School in a suburban section of northeastern San Antonio, the electoral process had simply fallen apart, swamped by turnout that Democratic Party officials should have been able to anticipate but apparently didn't. A line of voters waiting to cast ballots stretched out the door and around the corner of the school. Four precincts use the school as a polling place, but it looked like 400 precincts' worth were still there when the polls closed. Another few hundred people who had already voted were standing up against the wall waiting for the caucuses to start -- three hours behind schedule, because all the primary voters had to finish first.

Inside, the situation was even worse. About a dozen people had found their way into the school cafeteria -- the caucus site -- through an unlocked back door. They were milling around waiting for things to get started when a police officer showed up and ordered them out the same way. Meanwhile, the few Republicans there sat comfortably in the back of the room under a sad-looking, hand-lettered "Republican Caucus" sign. (The GOP didn't allot any presidential delegates through the caucus system, unlike the Democrats, so they were only there to elect county party officials.) Democrats standing out in the cold (by San Antonio standards, anyway) were apoplectic that Republicans got to stay inside. Watching the whole scene unfold, it was easy to forget that the state does this every four years. No one bothered to show up for the caucuses most years, because the state was usually irrelevant to the nominating contest. Clinton and Obama voters alike were not happy with the meltdown this time.

"By any stretch of the imagination, it's ridiculous," said Morris Blakley, 43, a federal government employee who was waiting to caucus for Obama. Clinton supporter Eileen Faz, another federal worker, found her limits tested as she was ushered outside. "I'm not standing on the wall," she complained.

The extraordinary turnout was driven by voters' keen desire to matter, to help select the nominee they hope will replace a president many Texas Democrats say they're embarrassed to share a home state with. But the close results they delivered Tuesday didn't settle things at all. Clinton may be running out of room to catch up to Obama in the delegate race, but Texas won't go down as her last stand.