Let 'em duke it out

The Obama-Clinton drama is good for voters and the Democratic Party. And bad for John McCain. 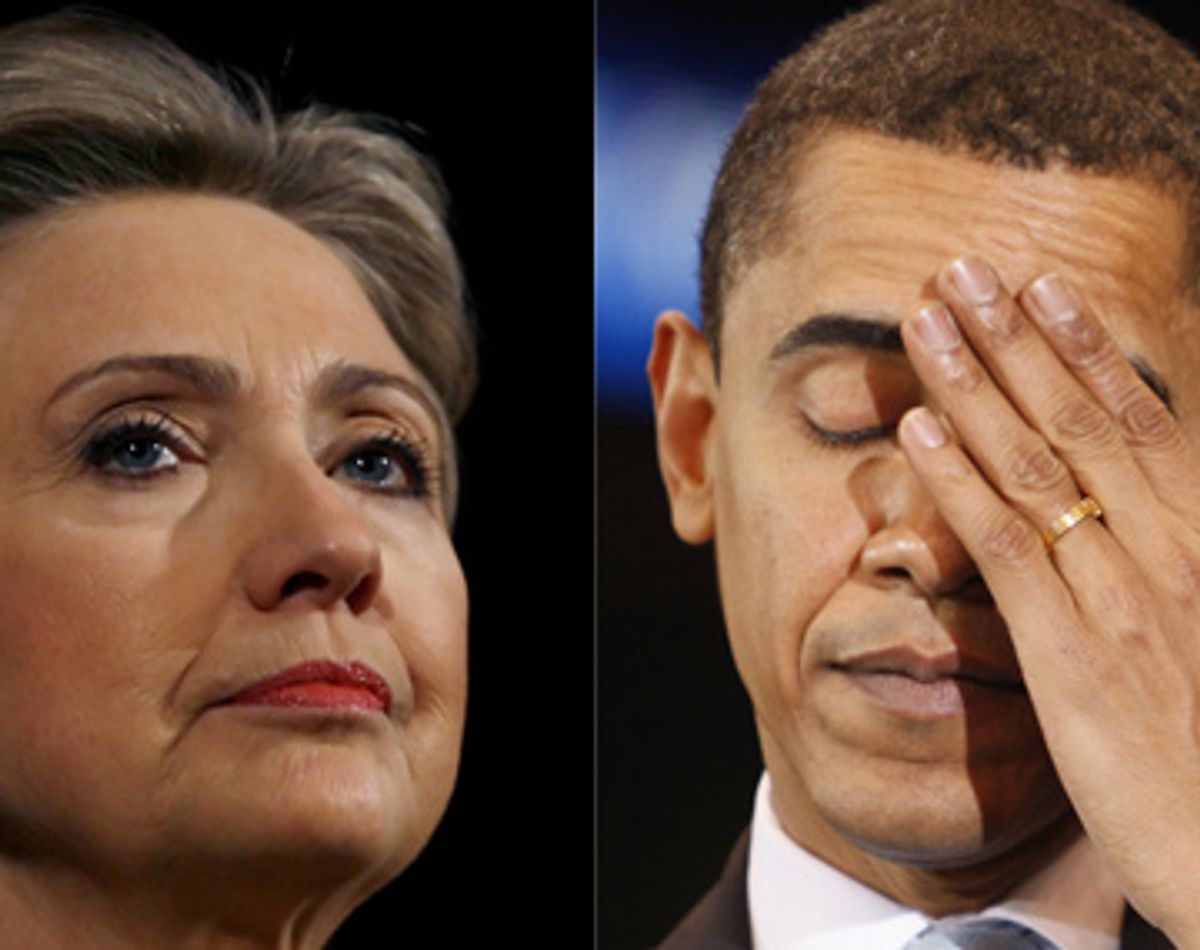 The sheer sense of collective befuddlement triggered by Hillary Clinton's political resurrection in Tuesday's primaries has been comic to behold. In the political and media cocoon known as Campaign Land, there is this gape-jawed, little-green-men-just-landed-on-the-front-lawn amazement that this is actually happening. The Democratic Party -- the symbol of disorganization since the days of Will Rogers -- has done it again. With just 172 days to go before the opening gavel of the Aug. 25 Denver Convention, the dithering Democrats have failed to agree on a nominee.

What a misconception. The real problem facing the Democrats is not the failure to achieve consensus nearly six months before the convention. It is that the party has almost completely run out of primaries just as the battle between Barack Obama and Clinton has become the greatest entertainment value since the movies did away with double features. What this means is that there is an unprecedented mismatch between the breathless tenor of cable TV and online political coverage and the pace of actual campaign events. After Saturday's caucuses in Wyoming (as goes Casper, so goes America) and next Tuesday's Mississippi primary, there will be a seven-week interlude (or maybe Quaalude) until the April 22 Pennsylvania primary. How long before even political junkies become weary pondering the mood of Erie?

If a majority of Democratic primary voters in Ohio, Texas and Rhode Island had wanted the nomination fight to end with the coronation of Obama, they had a very simple option -- vote for him in Tuesday's primaries. Instead, the first-term Illinois senator fell just short enough to guarantee that both he and Hillary need to hope they have a friend in Pennsylvania. Tuesday was actually the third time this year that Obama was poised to nail a "cease and desist" notice to Clinton's door only to find himself back on the sidewalk wondering what had happened. The contest might well have been over had Obama won the Jan. 8 New Hampshire primary or had done better than running even in the Feb. 5 Woozy Tuesday primaries. If Barack Obama were performing in a one-man play, critics might rightly wonder whether he had second-act problems.

The Democrats have reached the point where it is ludicrous to suggest that Clinton or Obama or all 795 superdelegates drop out of the race. When there is no clarity, there can be no early conclusion. Obama's 101-delegate lead, according to the Associated Press tally , is not exactly a definitive manifestation of the popular will when 2,025 is the magic number for nomination. While Obama is indisputably ahead, no presidential candidate in modern memory has ever hoisted the white flag at this stage in the campaign with the contest this close. Whether it was Ronald Reagan against Jerry Ford in 1976 or Ted Kennedy against Jimmy Carter in 1980 or Gary Hart seemingly against the world in 1984, the expectation was that even last-ditch battles would be decided at the convention.

But somewhere along the way, presidential politics went from a blood sport to a bland sport. The leaders of both parties decreed that political conventions had to be scripted like an Oscar telecast. The Democrats in 2004 (thank you, Bob Shrum and co.) were so afraid of controversy that they even stripped out most attacks on George W. Bush from the convention program. Small wonder the networks treat the non-news conventions like cheesy summer-replacement series that no one is expected to watch. And having stripped the lifeblood out of once raucous conventions (the Democrats went through 103 steamy ballots in 1924), the next step was to decide on early nominees so that the fall campaign could commence before it was even spring.

Beginning with Bill Clinton in 1992 (who was, to be technical, nominally opposed by Jerry Brown until the California primary), the de facto presidential nominees have all been selected by March at the latest. And a fat lot of good it has done them. Clinton, at one point in June 1992, was running third in the national polls behind both President George H.W. Bush and Ross Perot. In 1996, Bob Dole felt so stymied by Clinton that he resigned from the Senate seat he loved to concentrate on the presidential race. Even though Al Gore had five months before the convention to develop a winning strategy in 2000, he did little during this period to forestall his hanging-chad finale. And not long after a confident John Kerry wrapped up the nomination in March 2004 the first Swift boat attacks appeared -- and went unanswered.

John McCain announced Tuesday that he would be heading for Florida on Thursday to campaign in West Palm Beach. But the problem McCain faces is that he still has a faceless opponent with the Democratic race far from settled. So, in effect, McCain will be shadowboxing against a vague entity called Obama-Clinton. The result is that (just wait and see) McCain will find it difficult to make news since there is no longer any drama to anything that he does until it becomes time to pick a running mate. The Project for Excellence in Journalism, which monitors media coverage, found that last week the Democratic race generated four times the attention of the Republicans. And that news blackout occurred when McCain still had a nominal opponent in Mike Huckabee.

So rather than fantasizing about a soporific and conflict-free nomination fight, the Democrats should recognize the value of what they have stumbled into. The contest between Obama and Clinton -- this battle of historic firsts -- has the entire nation hanging on the edge of their seats. Who with any sense of show business would think of pulling down the curtain when the audience is shouting for more? But, then, if the Democrats had any sense of what the public craved, George W. Bush probably would not be in the White House.