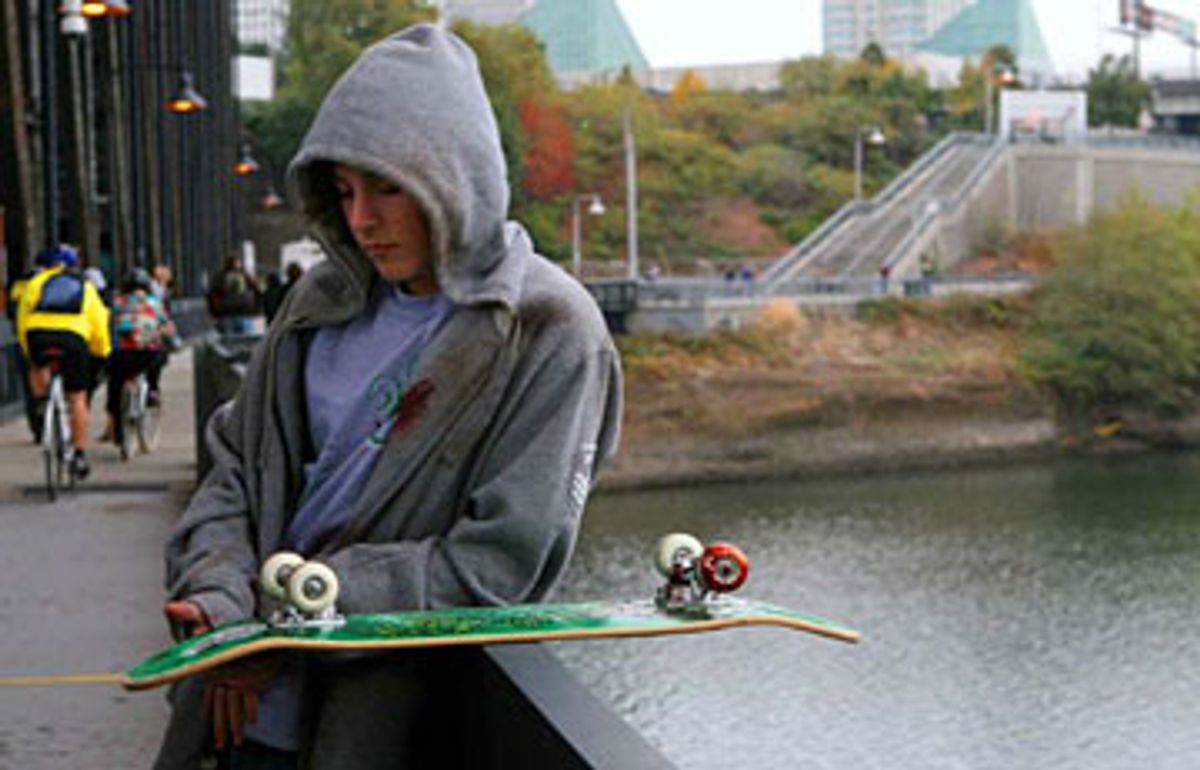 "I just feel like there has to be something else out there," says Alex (Gabe Nevins), the teenage protagonist of Gus Van Sant's new film "Paranoid Park," to Macy (Lauren McKinney), the bright, nerdy, faintly punk girl who isn't his girlfriend but probably should be. What Alex means isn't clear to us or to him -- something beyond his daily life of high school, divorced parents and skateboarding, surely, and maybe something beyond the perceivable world -- but his predicament is the same one faced by American independent film in its quest to capture reality, whatever that is.

"Paranoid Park," which was highly praised at both the Cannes and New York film festivals and now gets a limited release from IFC, is much more concerned with the in-here than the out-there. It's a haunting, absorbing aural and visual construction whose landscapes are interior, meditative and psychological. Although Van Sant adapted "Paranoid Park" from Blake Nelson's young-adult novel of the same name (which in turn was clearly inspired by Dostoevski's "Crime and Punishment"), plot and character are minor ingredients in the brew, at best.

"Snow Angels," the new film from David Gordon Green (director of "George Washington" and "All the Real Girls"), also opens this Friday and is almost a negative image of Van Sant's movie. Both of these high-integrity literary adaptations are about teenagers' traumatic encounters with the adult world and with death; both seek to balance the tender possibilities of young love against a larger universe of cruel and random events. But their approaches to superficially similar subject matter couldn't be more different. Where "Paranoid Park" is almost purely an aesthetic experience, to the point where Van Sant abandons any moral perspective or any coherent sense that acts have consequences, "Snow Angels" is a sober-sided, deterministic indie-formula narrative, full of Fine Acting, Life Lessons, Meaningful Moments and Quirky Supporting Characters.

I filed a brief, ill-tempered review of "Paranoid Park" from Cannes last May, but I'm not here to revisit that verdict or to pick fights with other critics who love the film. At least Van Sant has escaped from the corner that a certain genre of American indie cinema has painted itself into, in which moral seriousness demands an increasingly tedious variety of realism, and any sort of formal or structural ambition is seen as the enemy of meaning. Sometimes I wish that "You Can Count on Me" and "In the Bedroom" had never been made; I admired both movies very much and probably still would, but how many more life-changing conversations over a bowl of organic Honey-Nut O's do we have to watch?

In fairness, many of the things I found unsatisfying about "Paranoid Park" are the results of Van Sant's deliberate choices. His depiction of Portland, Ore. (his beloved hometown) as a sort of underpopulated teenage dream-state, beautifully shot by ace cinematographer Christopher Doyle -- he of all those Wong Kar-wai movies -- is an attempt to burrow beneath naturalism and capture something else. Maybe it's Alex's subjective reality, or maybe it's just Van Sant's semi-prurient fantasy of teen existence. (You hear Alex's parents but hardly ever see them; it's as if he were the hero of a post-grunge "Peanuts" animated special.) Kathy Rain Li's interpolated 8mm skateboard videos, set to languorous French pop music, are hypnotic and lovely, but they represent a middle-aged artist looking back in longing, not any genuine teenager's self-perception.

As has been widely reported, Van Sant recruited Nevins and several other cast members through MySpace, the exception being "Gossip Girl" star Taylor Momsen, who plays Jennifer, Alex's thoroughly implausible cheerleader girlfriend. No doubt that's a fine method for a movie like this one; as in Van Sant's other recent semi-experimental films (like "Last Days" and "Elephant"), the actors are used more as ambulatory human sculpture than anything else. Nevins is a sweet-faced, androgynous kid who looks closer to 12 than to 17, and he ambles through the movie with a stunned, baby-possum-in-the-headlights demeanor that works OK, given that Alex has done something dreadful and isn't dealing with it. Alex is so physically and emotionally passive that he appears more feminine than the girls do; when he and Jennifer have sex, he lies back on the bed, motionless and expressionless, while she climbs on top, literally obscuring him with her curtain of straight blond hair.

We understand right away that Alex was present in the railroad yards near downtown Portland's eponymous skateboard park when a security guard was killed in a gruesome accident. Although he's interviewed at school by a homicide detective, Alex is a shy kid and not a good skater, and is treated as a longshot suspect. As Van Sant hopscotches around in time and space, telling and retelling the story in overlapping scraps and fragments, we grasp more or less what happened, and how much it was driven by Alex's desperate desire for male approval and affection. Beyond that moment of insight, "Paranoid Park" is such a lovely, abstract head-trip, so unconcerned with narrative or characterization or dialogue (much of which is leaden, inaudible or overlaid with music) that the moral or spiritual or philosophical dimension of a person's death can only seem like a stodgy irrelevance. The guard's killing provides a couple of genuinely shocking images, but what is their effect on Alex or on us?

Again, I can only suppose that question to be part of Van Sant's intentions. It's just that he's not the right director to ask or answer it. You have to give him credit for making a formally and cinematically audacious film that at least tries to brush against elements of social and psychological realism. If "Paranoid Park" is mainly an accumulation of the signs and symbols and images inside Van Sant's own head, that's artistically legitimate. When he makes a feeble effort to connect Alex's plight to the Iraq war and the cultural climate of Bush-era America, I just don't buy it. That's like saying "blame society" when something more intimate and urgent -- Dostoevski called it "the gradual renewal of a man ... his initiation into a new unknown life" -- is at stake.

If "Snow Angels" is the antidote to "Paranoid Park," then the cure for head-up-ass aesthete's disorder may be worse than the disease. Green's film is much clearer and more conventionally satisfying than Van Sant's, and I had moments where I convinced myself I liked it better. This tale of rural domestic tragedy has a uniformly terrific cast, from the agonized lead performances of Sam Rockwell and Kate Beckinsale to the adorable teen coupling of Michael Angarano and Olivia Thirlby to crisp supporting turns from Jeannetta Arnette, Nicky Katt and Amy Sedaris. Green piles up one crisply observed scene after another, and ends the film with a devastating little episode, meaningless in itself, that encapsulates all the grief in this story in a single moment.

Sounds great, right? I only wish it were. Green has shackled himself to a deterministic, by-the-numbers adaptation of Stewart O'Nan's novel that drains the story of most of its reflective, philosophical qualities, moves it from the 1970s to a nonspecific present and relocates it from western Pennsylvania to a movieland American nowhere. (It was filmed in Halifax, Nova Scotia.) I'm sure Green could offer a noble theory about uprooting this fable of loserville bloodshed and madness from its time and place -- making it archetypal instead of local, or something -- but he's removed precisely the elements that made O'Nan's book bearable. More than anything, "Snow Angels" fails the "King Lear" test: If a movie's going to put you through the death of a child and a gruesome murder-suicide, the catharsis on offer has to be closer to Shakespeare's level than to a competent blend of "Little Children" and "Napoleon Dynamite."

Rockwell and Beckinsale are Glenn and Annie Marchand, a working-class couple whose marriage has hit a patch of black ice on the way toward oblivion. Beckinsale tackles the downscale role manfully, but Rockwell is nearly unrecognizable as the pudgy, suicidally depressed, chronically inept Glenn, who's acting out a half-convincing portrayal of himself as a born-again Christian. Annie has thrown him out and started boffing Nate (Katt), the mustachioed Lothario who's married to her restaurant co-worker Barb (Sedaris, who's great both as comic relief and in her dramatic scenes).

All this is being observed by sweet-tempered Arthur (Angarano), a middle-class teenager who's had a crush on Annie ever since she was his baby sitter. Angarano's an agreeable screen presence, and Arthur's budding romance with eccentric new-girl-in-school Lila (Thirlby) gives "Snow Angels" a few light moments in its relentless downward spiral. But this structure -- the semi-disinterested outsider who observes a tragedy in slow motion -- is essentially literary, and Green never quite pulls it off. Arthur's parents (played by Arnette and Griffin Dunne) are going through their own divorce, in what's meant to be ironic counterpoint to Glenn and Annie, but the comparison in Green's film just feels jumbled and grotesque.

All the formal and technical elements of "Snow Angels" -- its wintry scenery, Tim Orr's restrained cinematography, its clip-clop progress from one story line to another and back again -- are both accomplished and stultifying. Green has studiously followed the recipe for cooking up a mid-budget, downbeat-realist indie, only to end up with a bland stew that's every bit as mannered and artificial, in its own way, as "Paranoid Park" (and arguably less heartfelt). I came out of this supremely well-intentioned movie just feeling bummed out. Can we declare an end to the age of earnestness yet?