Julianna Margulies swaggers as a devil-may-care lawyer on Fox's "Canterbury's Law," while Gabriel Byrne slowly unravels on HBO's "In Treatment." 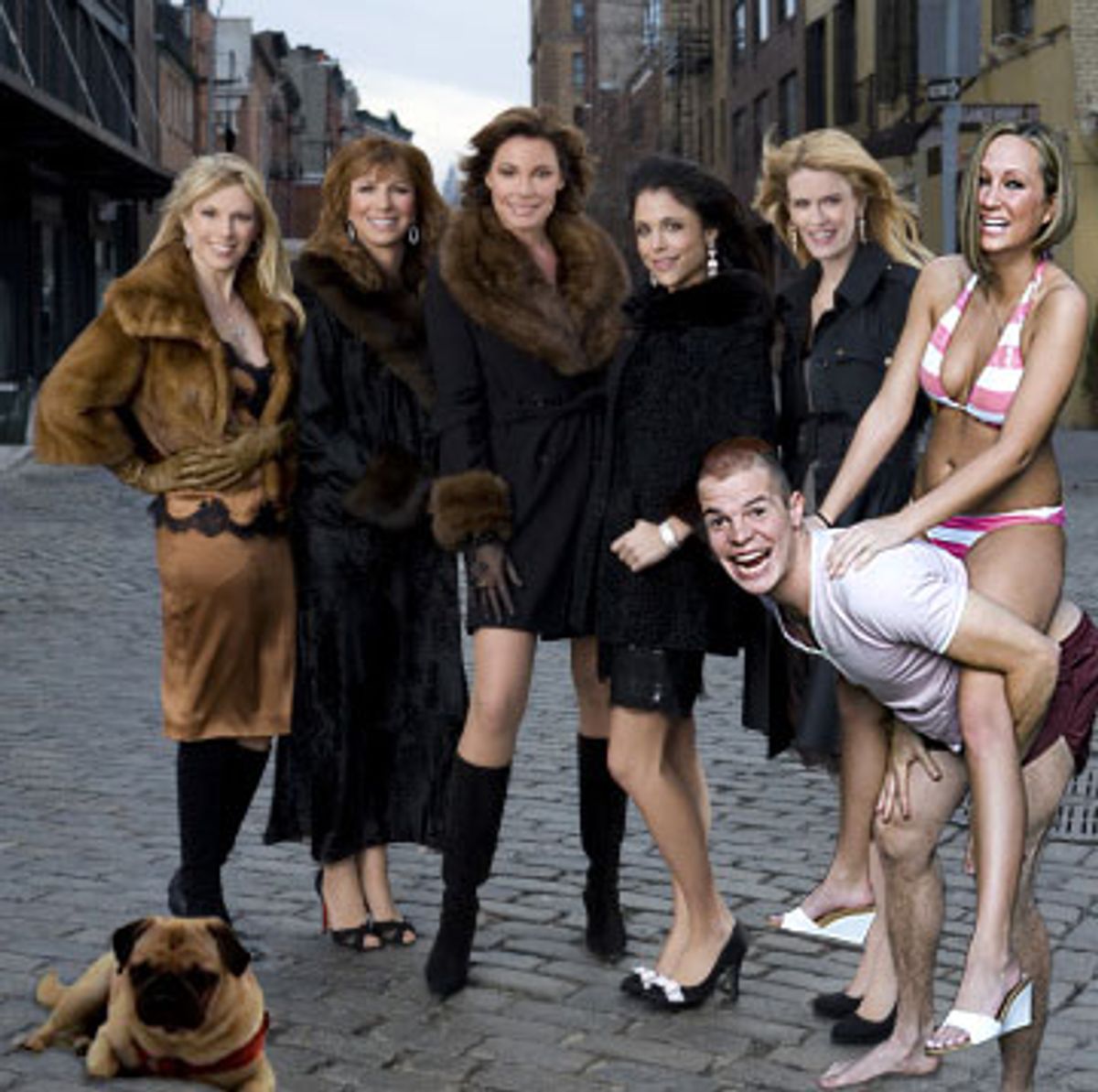 Overbearing professionals are the rock stars of the small screen. Since the malleable and the mediocre are so often rewarded in real-life workplaces, it's no wonder that so many of us choose to spend our evenings in the company of outspoken, arrogant know-it-alls like James Woods' character on "Shark" or Simon Cowell on "American Idol" or that awful "Millionaire Matchmaker" lady.

When Jack Bauer snaps at his bosses on "24," then not only ignores their wishes, but also breaks a few laws and tortures an innocent civilian along the way, we're temporarily emancipated from the team-player make-believe bubbles we're forced to live in, nodding in agreement with our bosses while our minds quietly calculate how long we could live on food stamps if we quit tomorrow.

And they wonder why Americans watch quite so much TV? Mavericks from "The Wire's" McNulty to "The Shield's" Vic Mackey swagger through the world, breaking rules, scoffing openly at management and making no secret of their feelings of superiority, exactly the sorts of behaviors that will get you demoted and shamed and fired and written off as a troublemaker in the real world.

So, as the real world is populated less and less by colorful, opinionated, brash souls, TV Land fills up with such types, their brilliance and bravado rewarded afresh each night. Meanwhile, we drive home from our jobs and plant ourselves in front of our television screens, we who once dreamed of being more than neutered office drones, and we sit mutely there for hours, soothed by illusions, soaking into our couches like untended stains.

Above the law
OK, maybe we don't soak in like untended stains. Maybe we soak in like really comfortable, relaxed sons of bitches, doing whatever the hell we please after a long, grueling day spent earning our keep.

I can't quite decide. Are we untended stains or relaxed sons of bitches? And is there a real difference between the two, existentially speaking? Elizabeth Canterbury, the macho lady lawyer of Fox's new drama series "Canterbury's Law" (premieres 8 p.m. EDT on Monday, March 10), could probably answer that question in front of a jury of her peers, if she weren't so preoccupied with her latest grueling case defending the accused. I'm going to hazard a guess that she'd say we were relaxed SOB's who deserved a little R&R, just like she deserves to speed away in her Porsche for an illicit dalliance or to toss back a few glasses of vodka on the rocks while sidestepping her colleague's implication that she's still in serious pain over the loss of her young son. We aren't told much about this loss, but it's clear that Canterbury is trying to blunt the pain of some looming, Dominick Dunne-style tragedy.

Predictable back story aside, this is the kind of female character it's nice to see on TV for a change. Bossy and distracted and arrogant to the point of being slightly irritating, Canterbury is a cross between Nancy Grace and Dr. Gregory House of "House," demeaning her underlings and enraging the prosecuting attorney and cheating on her husband (played by Aidan Quinn). Canterbury ignores criticism, shrugs off her hate mail, and fires her receptionist because she's "stupid."

She's also prone to grandiose statements. "I sleep the sleep of the righteous," she says matter-of-factly, and claims, without hesitance, "I know when someone's lying to me." As Canterbury nears the courtroom steps and her associate wants to dodge the cameras, she walks right toward them, muttering, "My mere presence speaks volumes."

God bless Julianna Margulies, who first captured our attention as the needy, suicidal nurse girlfriend of George Clooney's Dr. Ross on "ER." Sure, her character, Carol Hathaway, eventually bought a house and considered med school, and Margulies had a great recurring role as Tony's lover on "The Sopranos," but that heartbroken nurse thing is tough to shake. For Margulies, this role must feel downright redemptive.

And yes, Canterbury is a rule-breaking über-professional, but she's nothing like the pretty rich girls of "Cashmere Mafia" or even the big-city professionals of "Lipstick Jungle." Canterbury is an actual drunk, she's depressed and slightly belligerent, and Margulies dares to give her verbal tics that can remind you of a nasty, nagging, know-it-all big sister.

In some scenes, it really does seem like Margulies has turned to the semi-pathological pluck and nastiness of Nancy Grace for inspiration. "Here's the new theory," Canterbury tells a judge in his chambers while the prosecuting attorney looks on. "The night in question, Mr. Jasper hits his son, which we all know that he did." The prosecutor starts to complain, but Canterbury simply raises her voice and takes on a condescending singsong that sounds exactly like Grace, "We all know that he did, only this time, this time he hits the floor and he doesn't pop back up. Mr. Jasper panics and buries him in the woods!" Now, most of us can agree that one Nancy Grace is enough in the world, but there's something sort of gratifying about a drama in which the lead character could dare to be that unlikable.

But Canterbury is in pain, remember? We see her feeling vulnerable and alone over the loss of her son, sitting on his bed, burying her face into his pillow. We get it, she's a human being. Why do women always have to be grieving a lost child to get away with being assholes? That "Shark" guy isn't weeping and snuffling pillows. House doesn't break down in tears when he's popping pills. Mackey has an autistic kid, but he's not crying into his oatmeal over it.

And unfortunately, when you take Canterbury's admirable vim and vigor out of the picture for a second, this is just another courtroom drama, limited to the same old overdramatic courtroom scenes that we've seen a hundred million times before, on "Shark" and "The Practice" and "Ally McBeal" and "LA Law" and "Law and Order" and on and on and on. The defense calls a surprise witness, somebody confesses or lashes out on the witness stand, some new bit of evidence emerges -- we know every possible variable, and when there are no predictable twists, we're also disappointed.

I don't know if there's a way for a law show to win at this point. My guess is that "Canterbury's Law" will flounder, despite its strong lead character. But hey, I've been wrong many, many times before.

Talk about the passion
Speaking of being wrong all the time, is anyone else out there as addicted to the foot-in-mouth fumblings of therapist Paul Weston on "In Treatment" (9:30 p.m. EDT weeknights on HBO) as I am? Although there have been a lot of therapy-centered dramas on TV lately (the worst of which had to be HBO's dreadful "Tell Me You Love Me"), "In Treatment" miraculously manages to make a half-hour of the talking cure look like Mr. Toad's Wild Ride.

Paul (Gabriel Byrne) is obsessed with his work and conflicted about his marriage, and he's falling for one of his patients. Laura (Melissa George) is a 30-year-old anesthesiologist who's thoughtful and intense and a little crazy, but she's very smart, maybe even smarter than Paul, and she plays him like a Stradivarius, sleeping with his other patient Alex (Blair Underwood) just to make him jealous.

In the past few weeks, each session (a different patient is featured each night of the week, then Paul sees his therapist on Fridays) seems to be spinning out of Paul's control. Feeling angry that Laura was so clearly obsessed with Paul, Alex looks into Paul's private life and then taunts him with the fact that his wife is cheating on him and his father was neglected by him, causing Paul to explode and hit Alex. Then, just as Paul's wife, Kate (Michelle Forbes), insists that her affair is over and it means nothing to her, Paul admits to his therapist, Gina (Dianne Wiest), that he's in love with Laura. Then Paul tells Laura that he "cares deeply" for her, but he won't let her make a move. But will that change? And when Paul and Kate show up for couples therapy with Gina, the flying insults and bruised egos and rationalizations make "Tell Me You Love Me" look like hypnotherapy.

I'm sure it all sounds like a soap opera if you haven't seen it, but each episode has so many intense moments, twists and turns that it's hard to look away. Yes, of course we know that no therapy office could possibly be that dramatic, that therapists can sit for years and years in the same semi-comatose state as their clients describe their search for the right dishwasher in elaborate detail. But few courtroom trials end in fisticuffs or an impromptu confession, either.

I think what I like the most about "In Treatment" is that Paul, a busy, distracted, somewhat arrogant expert who's fiercely proud of his work, is so often completely out of control of his professional life: Laura manipulates him, Alex knows how to get his goat, and almost-divorced couple Jake and Amy both seem to hate his guts. Then Gina and Kate can hardly keep themselves from exchanging disbelieving looks and eye rolls of disgust as he intellectualizes, condescends or arrogantly justifies being led around by his desires.

This is a character who takes the legs out from under the notion of the heroic, infallible, outspoken professional, much the way McNulty's slow downward slide this season on "The Wire" has served the same purpose. Paul Weston is a therapist, but with the help of Gabriel Byrne (who absolutely deserves an Emmy for the range he demonstrates and the palpable inner conflict he reveals with such restraint), we see that he's also just a man, one whose flaws, however forgivable, are poised to bring his entire world crashing down around him at any moment.

Makes you sort of grateful not to be one of those overbearing professionals, doesn't it? Yes, there's something to be said for the life of the neutered office drone. The meek, the malleable and the mediocre shall inherit the earth!

Tonight: Don't miss our recap of the two-hour finale of "The Wire," plus an exclusive interview with show creator David Simon first thing Monday morning.