When gas prices rise, incumbent parties hit the skids. If only it were that simple. 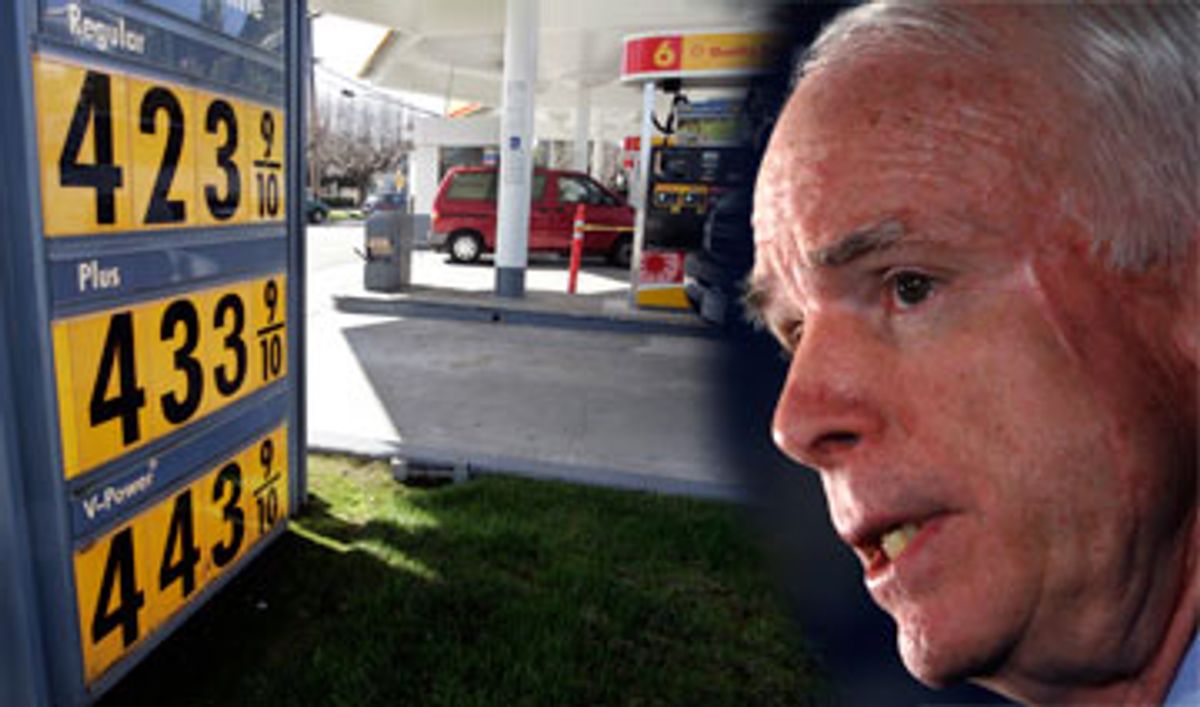 On March 7, the average price of a gallon of gasoline in the United States reached $3.17. Four dollars a gallon by summertime is well within the realm of possibility -- even if that comes as a surprise to the current occupant of the White House. Record gas prices? During an election year? What could it mean?

When Jimmy Carter was sworn in as president in January 1977, the average price of a gallon of regular leaded gasoline was 60 cents.

The United States phased out leaded gas in 1991, so for comparison purposes we must switch to unleaded. In November 1988, the average price of a gallon of regular unleaded was 95 cents. But four years later it had jumped to $1.15.

By November 1996, the average price had risen 10 cents, to $1.25. But incumbent Bill Clinton still managed to beat Bob Dole anyway. The exception that proves the rule? Normalcy soon reasserted itself: In November 2000, the price shot all the way up to $1.55, and Bush the Second "beat" Al Gore.

So far, so good. The numbers tell a remarkably consistent story, notwithstanding the minor blip of Clinton vs. Dole. Otherwise, in every single case, it's the gas price, stupid. Rising pain at the pump spelled doom for the political party that held the White House.

The only significant exception to this pattern came in November 2004. The average price of gas had jumped again, to a sky-high $2.00, but Bush won reelection anyway.

And now we're up to $3.17, with $4.00 coming. Indeed, if you look at a chart of gas prices, unadjusted for inflation, going back to 1979, Americans have never seen anything quite like the great gas-price surge of the Bush presidency. The trend line is considerably less alarming if you adjust for inflation, but even then, the spike of the last seven years can be compared only to that of Jimmy Carter era.

So the Republicans are finished, right? Democrats can blissfully ignore a spring full of increasingly nasty campaigning between Barack Obama and Hillary Clinton. They can wave away the vexing headache of unseated Florida and Michigan delegates and dismiss the nightmare of a brokered convention. With gas prices on their side, how could John McCain possibly have a chance? If Americans are facing $4 a gallon at the pump as Election Day approaches, history tells us that the odds are against continued Republican occupancy of the White House.

But wait. As every statistician reminds him- or herself while showering each morning, correlation is not causation. Did gas prices do Jimmy Carter in, or did the Iran hostage crisis? What helped Bill Clinton more: pump prices or an H. Ross Perot candidacy that split the conservative vote? In 2004, George W. Bush used the threat of terrorism and the ongoing Iraq war to club John Kerry. A terrorist attack in the fall of 2008 could just as easily hand the White House to McCain.

High gas prices could also just be one data point among many in periods when the overall economy is in a downturn. Carter and George H.W. Bush, one could argue, were mortally wounded by an economic malaise that spread beyond energy prices. Clinton's 1996 win, conversely, can be explained on the grounds that the economy was starting to do quite nicely in the mid-'90s. If the U.S. economy goes into a recession in 2008 (if it hasn't already begun to do so), then the Republicans will be fighting against a major headwind, with or without the help of four-buck gasoline.

But the whirling numbers on gas pumps across the nation must still be disconcerting sight to the GOP. Poor John McCain. It isn't his fault, is it, that the price of a barrel of oil is at an inflation-adjusted all-time high? Many factors contribute to the price of a gallon of a gas, and we all have our favorite suspects. Republicans like to blame environmental regulations that restrict drilling for oil and supposedly inhibit the construction of new refineries to formulate gasoline in sufficient quantity when demand spikes. Democrats prefer to target price-gouging oil companies.

But record-breaking crude-oil prices are probably the biggest variable in the equation, and American presidents simply don't have the power to wave their arms about and get the spot price for West Texas Intermediate light crude to drop. George Bush tried. Last Wednesday he asked OPEC to pretty please increase production and relieve some of the pressure. OPEC said no. Does anyone think McCain (or Clinton or Obama) would have any more success? They'd be just as well off asking middle-class Indians and Chinese to refrain from trading in their bicycles and scooters for brand-new four-door sedans equipped with GPS locators and satellite radio. Forget it.

The most pathetic part of the political spectacle likely to unfold throughout the rest of this election year will be the sight of candidates tripping over themselves to tell us how, if elected, they will lower gas prices. Putting aside the question of whether that would be a good idea even if it were possible -- after all, there's no better way to get people to drive less and buy fuel-efficient cars, or to direct capital investment into developing alternative sources of energy, than to have the incentive of high gas and oil prices -- the fundamental problem remains: Oil is a commodity whose price is set by global forces of supply and demand (and possibly some help from energy trader speculation). Even OPEC has a hard time these days maintaining its target prices for a barrel of oil. The only thing an American president could do, in the short term, is release some of the oil stockpiled in the Strategic Petroleum Reserve, and most market watchers believe any ensuing price change would be temporary, if it was even noticeable.

Sure, some things can be done. Fuel-economy standards can be further tightened. The less gas we consume, the less it hurts our pocketbooks. Unregulated trading of energy derivatives can be made more transparent to give regulators a better chance at reducing market speculation and preventing hedge fund operators from gaming the system and driving up prices. It makes zero sense to be giving oil companies subsidies and tax breaks aimed at encouraging exploration when the price of a barrel of oil is at an all-time high. That should be incentive enough. The money saved would be better spent cushioning the impact of high gas prices on working-class people for whom transportation costs make up a disproportionate share of the daily budget.

But lower gas prices? Don't be silly. If the next administration is serious about tackling climate change, as all three remaining candidates for president claim to be, some form of carbon tax or cap-and-trade system that penalizes the production of carbon dioxide will be put in place and likely result in higher energy prices, not lower.

Which leads to us smack-dab into a paradox. If history teaches us anything, it's that doing the right thing on the environment will likely result in the speedy ejection of whoever occupies the White House when the next election rolls around. Americans just don't like higher gas prices.