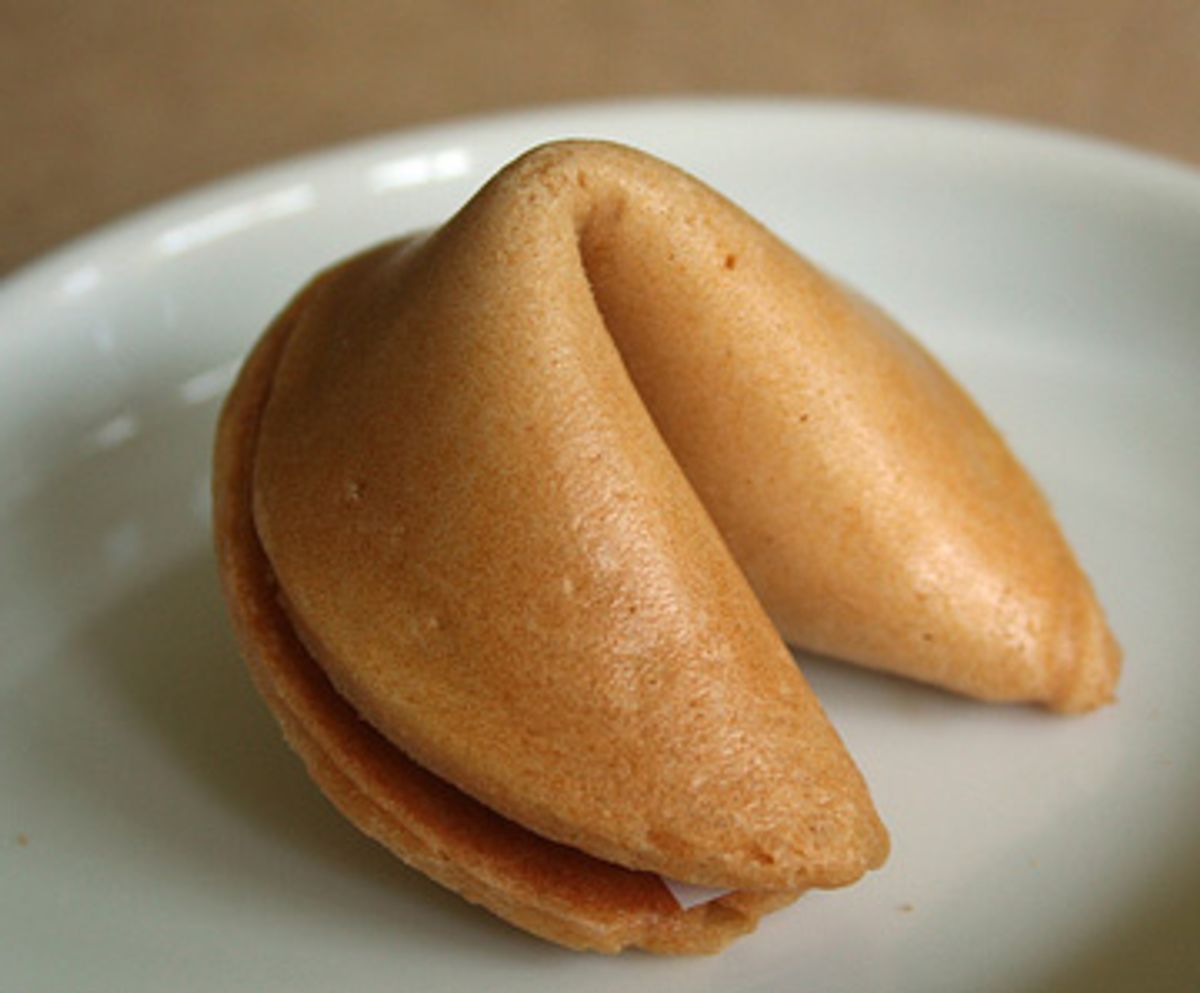 As a teenager, New York Times reporter Jennifer 8. Lee was crushed to learn that fortune cookies weren't Chinese. She likens that moment to "learning I was adopted while being told there was no Santa Claus." She became obsessed with answering the specific question of where the cookies did originate and the bigger question of how Chinese food became, as she says, more American than apple pie.

The quest led her to her first book, "The Fortune Cookie Chronicles," which took her around the world and all over the United States to dig up some of the missing links between the food her Taiwanese mother cooks at home and the boneless, saccharine dishes she preferred (to the dismay of both her parents) as a kid growing up on the Upper West Side of Manhattan. She searches rural Hunan for the origins of America's most beloved Chinese dish, General Tso's chicken, only to find the people of the general's hometown have no idea what she is talking about. She visits a Chinese village that resembles a ghost town because its men are working in America's Chinese restaurants. She takes us through the scary global network of human trafficking, introduces us to the woman who single-handedly spearheaded the Chinese food delivery business in Manhattan, and shows us the Jewish-owned factory that makes those free soy sauce packages -- which, by the way, contain no soy.

Her adventures are illuminating, and the big picture of how American taste has altered Chinese food, and vice versa, sheds complex light on both cultures. The evolution -- or devolution -- of Chinese food in America has similarities with other major ethnic foods, especially Italian and Mexican: As Americans adapt to new flavors, we simultaneously impose our own lustiness onto every cuisine we touch. The portions get bigger, the meat-to-vegetable ratio is reversed. Everything must be breaded, fried, sauced beyond recognition.

Somehow, Lee avoids making judgment calls or impassioned political stands. Although her fascination is personal, hers is an attitude of amused observation, obsessive reporting, anthropological curiosity. In fact, the most striking thing about the book, especially in light of recent trends in food writing, is her unwillingness to sneer at fast food or inauthenticity.

Reading your book, I found myself oddly craving General Tso's chicken. The other night, I treated myself to a very special meal a few blocks away from my apartment. I knew it was going to be crunchy and gooey-sweet. But what really struck me was that with the first bite, I was hit so hard with another association -- Chicken McNuggets. The taste was practically identical.

Oh, yeah. Totally. It took McDonald's a decade to develop McNuggets, which appeared in 1980, but General Tso's chicken swept the country by the mid-'80s, without the organized experimenting and marketing.

It was funny that your Chinese friend called General Tso's chicken the "ultimate Chinese-American dish." Later in the book, you say that it's as American as it is foreign. Is it Chinese at all?

My Chinese friends who have come here for grad school are like, "What is this?" I call it indigenous foreign food. It's indigenous because it was created here, but it's inspired by something foreign, the same way burritos are Mexican. American Chinese food is its own thing. It has been exported to all these other countries, but not from China -- from America.

As a kid, you loved beef with broccoli. After all your travels and research, do you actually enjoy what you call American Chinese food?

I certainly prefer "Chinese Chinese food." These things have a lot to do with our associations. For me, the time between college and 9/11 -- this pocket of, like, two years -- was an amazing time for me. I traveled all over China, and that's when I really started to love the food. When I go out for Chinese, it has to be a place where I can get dishes you won't find on an American takeout menu, like certain lamb dishes and kinds of buns, and some tofu dishes. As a kid, I definitely preferred beef with broccoli. I was like, Why can't Mom cook like this? Now I realize how naive I was.

You write that "authenticity is a concept that food snobs propagate." But I wonder, if you sit down for American Chinese food with a bunch of Americans who have never had anything else, don't you want to shake them and show them the real thing?

Oh, yeah. All the time. I try to order things that people might not have had before, but that will be pleasing to them. I'll order a lot of single-vegetable dishes. That whole vegetable medley thing -- the baby corn and the mushrooms and carrots -- that's not Chinese. I will introduce people to a vegetable dish with a twist, like eggplant with garlic. Or even a simpler, green vegetable, like the one that translates to "empty heart vegetable," or snow pea shoots.

One dish that doesn't go over very well is Ma Po tofu. The name means "pock-marked lady." It's too spicy. People expect tofu to be bland -- you know, it's white. The book "The United States of Arugula" talks about how people's tastes have definitely opened up in the last 15 years. It's true, but it's still baby steps.

There are two very different ways you frame Chinese food -- and food in general -- in your book. On the one hand, you talk about cooking as an always changing, evolving "language," but you also write that cooking and eating are the easiest ways for immigrants to preserve their cultural heritage. How do you reconcile these ideas?

Hmm, I don't know. I guess dumplings are a perfect example. They're essential to our heritage. We buy the skins, but then, it can be hard to find ground pork in American supermarkets, so maybe we start stuffing them with turkey.

You know, I'm sure my grandkids will be able to make dumplings, but I don't know how their Chinese is going to be. And maybe their dumplings will be really different. Maybe in 30 or 40 years, we'll have decided that meat is bad for global warming and everyone will be a vegetarian. But there will still be the essence of that heritage. It is like language. In English, we have all these different influences, and the way we talk changes, but we can still see the etymology of the words.

The way you talk about the evolution of Chinese food in America made me think a lot about Italian-American food. My family is Italian, and my parents, both third generation, made this big effort toward a more "authentic" identity. They spent time in Italy, my mom learned the language, and I grew up eating "real" Italian food. I always looked down on Italian-American food. More recently, after spending time with some really great Italian-American home cooks, I came around to respecting that cuisine as its own thing. I wonder whether your experiences have had a similar effect on you?

Authenticity is a function of time and place, so, to Americans, this is an authentic cuisine -- to the point where, when the Americans invaded Iraq, they actually brought Chinese-American cuisine with them. There were two restaurants in the Green Zone that served American Chinese food, and they were so popular because, for the Americans, it was a taste of home.

Last year, I spent some time exploring a stretch of Eldridge Street in Chinatown where there are a bunch of Fujianese restaurants. One guy who was nice enough to translate a menu for me explained that most of the restaurant workers in New York come from the Fujian province, like your grandfather. If there are so many immigrants from this one area, why aren't we seeing more of that cuisine?

Well, one, it's very seafood-driven. Americans, not so into seafood. Salmon, yes, but not octopus, squid, etc. Also, Fujianese food is, like, OK. You know, they have a lot of fish balls, they have some weird noodle things going on, and if you go there, they have fantastic fresh seafood. They do amazing things with crab, but when it comes down to it, it's not a sophisticated cuisine. The people coming over from the Fujianese city of Fuzhou are hicks. It's not like some of the Cantonese food that comes over, for example.

In your chapter on soy sauce, you write: "America has simplified -- or corrupted, depending on your perspective -- and mass-processed many refined foods from around the world," and you go on to list beer, chocolate and cheese as examples. So what is your perspective? Has America just simplified these foods, or corrupted them?

Oh, it's both. It's corrupted in sort of a good way.

In one chapter you describe your attempts to find the greatest Chinese restaurant in the world. Why do you think so many people you spoke to expected it to be a hole-in-the-wall place or a dive?

There are certain kinds of food where authenticity seems to imply dive-ness. For example, if I told you the best barbecue is this four-star restaurant on Wall Street, with white tablecloths and fine crystal, you'd be like, Huh? There's something about those kinds of food that [makes us] associate their authenticity with the idea that they're not upscale.

It depends on the type of person. Some people are naturally curious about the world and some are not.

Nina Lalli is a writer living in Brooklyn.