How the press failed on Iraq

A hard look back at the past five years -- with all its death and destruction and missteps -- reveals that the American media has been sleepwalking through the war. 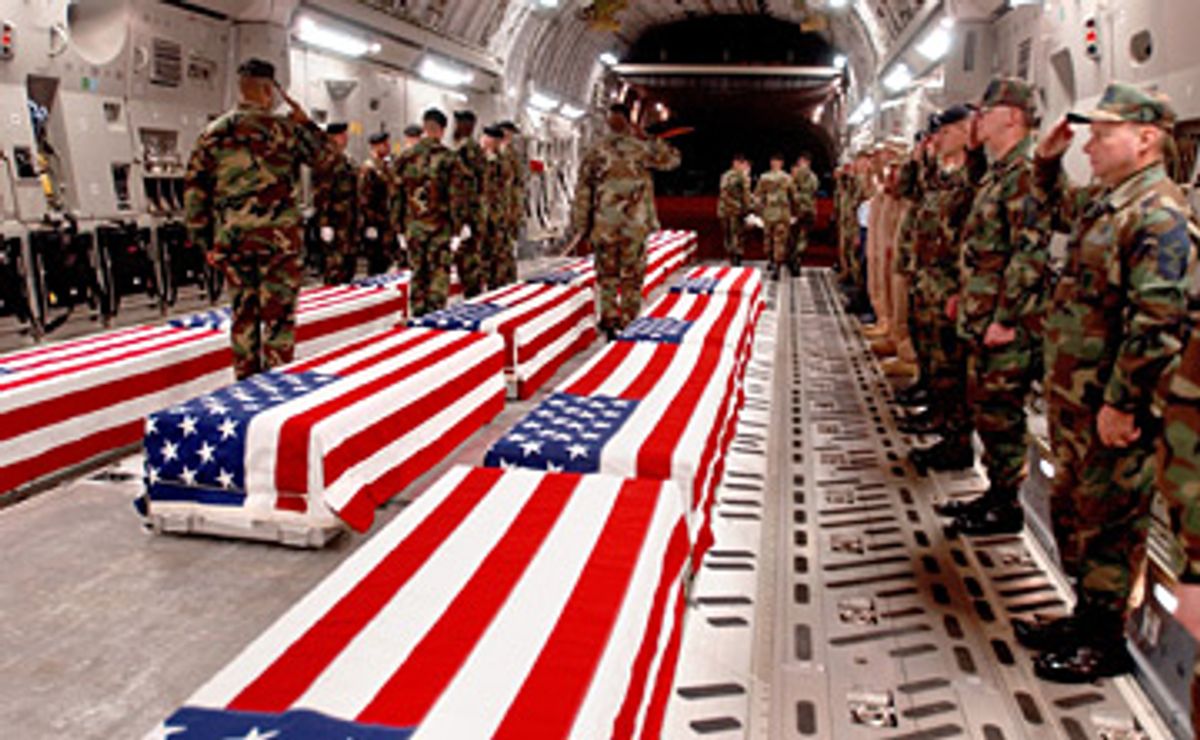 Stephen Colbert's routine at the White House Correspondents' Dinner in 2006 was celebrated or lamented for his pointed barbs at the president while Bush sat just a few feet away. What many may forget, however, is that his critique of the press was just as biting -- and widely resented by many of the journalists in attendance. Some of the same guests had attended a similar dinner two years earlier and roared with laughter when the president aired a goofy video which showed him looking around the White House for those darn missing WMDs (as dozens of American kids were dying in Iraq that month).

One of Colbert's passages could serve as an epitaph for the early coverage of the war. Addressing the reporters in the hall, Colbert, in his faux right-wing blowhard persona, said, "Let's review the rules. Here's how it works. The president makes decisions, he's the decider. The press secretary announces those decisions, and you people of the press type those decisions down. Make, announce, type. Put them through a spell-check and go home. Get to know your family again. Make love to your wife. Write that novel you got kicking around in your head. You know, the one about the intrepid Washington reporter with the courage to stand up to the administration. You know -- fiction."

Perhaps, as Colbert had observed when he was still on "The Daily Show," it's all Saddam Hussein's fault -- for not having those weapons of mass destruction. Surely, if we'd found them, public opinion about the media's performance before and after the U.S. invasion in 2003 would have remained at favorable levels far longer. Yet the fact that we did not find WMD did not inspire much of the media to quickly look more deeply, and with more skepticism, at how we got into the war. Nor did it seem to shred the authority most commentators continued to grant the president, Pentagon officials, and others involved in planning and running the war. Not even the disgraceful propaganda campaigns surrounding the capture of Jessica Lynch and the friendly-fire killing of Pat Tillman accomplished that.

As events unfolded in Iraq over many months, and then years, since the 2003 invasion, some of us old-timers -- David Halberstam, to name another -- who had lived through the Vietnam era knew that the longer we stayed, the longer we'd have to stay, to justify the invasion and all the killing and maiming since we'd arrived on the scene. At least this would be the view of those directing the war, calcified editorial writers at The Washington Post and various hosts and guests on cable news channels.

As years passed, reporters in Iraq (and some in Washington) grew more skeptical, but by then it was too late. Editorial pages and TV pundits, meanwhile, lagged far behind the public -- and even behind some conservative Republicans in Congress -- in failing to cry "enough!" Victory, or at least a decisive turning point, was always just around the next IED-blasted corner, in their view.

In early 2007, with the announcement of the "surge" of troops in Iraq, TV commentators punted at the most crucial moment since the invasion of Iraq -- and not a single major newspaper came out against the escalation until after it was announced. They were all sleepwalking into the abyss. Even if the "surge" proved relatively successful, it would guarantee at least several more years of heavy U.S. presence in Iraq, and the deaths of thousands of more Americans.

By the time of Gen. David Petraeus's report to Congress in September 2007 -- giving a thumb's up to Gen. David Petraeus's handling of the "surge" -- media commentary had grown more critical. Still, The Washington Post editorial page and legions of pundits continued to back the war, despite their promises, months earlier, to withdraw support if "benchmarks" were not met. Glenn Greenwald, the popular Salon blogger, described the formula this way: "1) If X does not happen, there is no justification for staying; 2) X has not happened; 3) we must stay."

Much of what journalists need to know about public officials can be summed up in two words: as the muckraker I. F. Stone once advised, "Governments lie." Early in my training as a reporter in the late 1960s -- in journalism school and on a daily newspaper -- I was taught to always be skeptical of statements, by those in authority, that just might be self-serving. (At the time, I only got a chance to put that into practice in interviewing the local mayor or housing department chief.) A few years later, the lies of President Nixon -- on the war, on Watergate, on not being a crook -- promoted a period of aggressive probing throughout the news business.

Sure, some in the media went overboard, trying to be the next Woodward or Bernstein; but better to be overly skeptical than overly credulous. We saw the result of the latter, three decades later, surrounding the run-up to the Iraq adventure, and then in too much of the mainstream coverage since. Who can forget the days when simply questioning the evidence of WMD in Iraq made you appear weak-kneed or even, god forbid, "French"?

Thomas Ricks, the military reporter for The Washington Post (and author of a fine book about the war, aptly titled "Fiasco"), spoke volumes when he explained his paper's failures in the ramp-up to the war in 2003 by saying, "There was an attitude among editors: Look, we're going to war, why do we even worry about all the contrary stuff?" His colleague Karen DeYoung put it in even more appalling terms: "We are inevitably the mouthpiece for whatever administration is in power." Walter Isaacson, who headed CNN when the war began, later informed Bill Moyers that "big people in corporations were calling up" when the network showed civilian casualties, declaring, "You're being anti-American here." Bob Simon, the CBS correspondent, told Moyers that covering the marketing of the war was so "explosive" that he felt he should "keep it, in a way, almost light -- if that doesn't seem ridiculous."

While most of the reporters in Iraq recovered from their early rah-rah "we are taking Baghdad" coverage to produce years of tough-minded and valuable work (to the extent that it was possible amid the horrid violence), their counterparts on the home front often fell down on the job. At times, it seemed that they, not their colleagues traveling with our armed forces in Iraq, were the "embedded" reporters operating under fear of censorship or sanctions for stepping out of line. Declarations from the White House or the military about "progress" in Iraq, or assertions that Iran or al-Qaeda were the true villains there, were reported widely, with contrasting evidence often buried.

Few if any journalists were brave enough to nakedly declare, at any of the many apt opportunities since 2003, that a scheme is not a vision (to borrow the Leonard Cohen lyric). When Chris Matthews, after the U.S. took Baghdad, declared on MSNBC that "We're all neo-cons now," he acted as if that "all" included the press and that this was somehow a good thing. Blindfolding our democracy rarely strengthens us on the battlefield. No lesson for the future could be more clear than the need to take with a huge grain of salt every statement by any official who just might be pushing a cause or covering his ass. Even an emperor -- or a Colin Powell -- sometimes wears no clothes.

Then there was the failure to visually reveal the true horror of what was transpiring in the war. It was bad enough that the Pentagon banned photos of returning coffins; but then TV producers and newspaper editors on their own chose to display few images of the carnage, sanitizing a bloody landscape. Some photographers complained, and Pim Van Hemmen, assistant managing editor for photography at The Star-Ledger in Newark, N.J., said in 2005, "We in the news business are not doing a very good job of showing our readers what has really happened over there." The U.S. media provided few images of the human cost of war while news outlets in Europe did show photos of dead or wounded.

The past five years of death, destruction and global setback for America's security and image reveal some of the consequences of the media failure to ask more questions, and too often accept weak or misleading answers. Who can forget the Greatest Hits: "Mission Accomplished," "Judy Miller's Turn to Cry," "The Friedman Unit," "It's All in the Plame," "The Armor We Went to War With," "Surging USA," and all the rest.

Will the lessons be heeded? Certainly, few of those who promoted the war based on false information have lost any standing in the media, even if they did lose respect from some in the audience. The Washington Post, for example, not only continued to carry columns by several regulars who had repeatedly misfired on the war -- and mocked anti-war critics -- but it even went out and hired Michael Gerson, President Bush's main speechwriter during the run-up to the invasion. William Kristol, one of the war's intellectual architects, kept his Time column, contributed Op-Eds to the Post, and didn't seem to lose any face time on TV -- then got a plum Op-Ed spot at The New York Times. The Post's editorial page, meanwhile, remained hawkish on the war through thick and thin, often contrary to virtually everything emerging in the paper's own news pages.

Will Rogers once said that the first thing you do when you find yourself in a hole is quit digging. In regard to the Iraq catastrophe, the media not only helped excavate the hole, it did not do nearly enough to help America dig out.

Greg Mitchell is the editor of Editor & Publisher magazine and author of the new book book "So Wrong for So Long: How the Press, the Pundits -- and the President -- Failed on Iraq" (Union Square Press), which includes a foreword by Joe Galloway and preface by Bruce Sprignsteen. His eight previous books include two on infamous political campaigns, "The Campaign of the Century: Upton Sinclair's Race for Governor of California and the Birth of Media Poltiics" (winner of the Goldsmith Book Prize) and "Tricky Dick and the Pink Lady." He has also co-authored two books with Robert Jay Lifton, including "Hiroshima in America." His email is gmitchell@editorandpublisher.com, and he blogs at http://gregmitchellwriter.blogspot.com.