The tragic fall of Eliot Spitzer

He once busted up "sex rings" himself, but the New York governor's hiring of a pricey prostitute has shattered his political career. 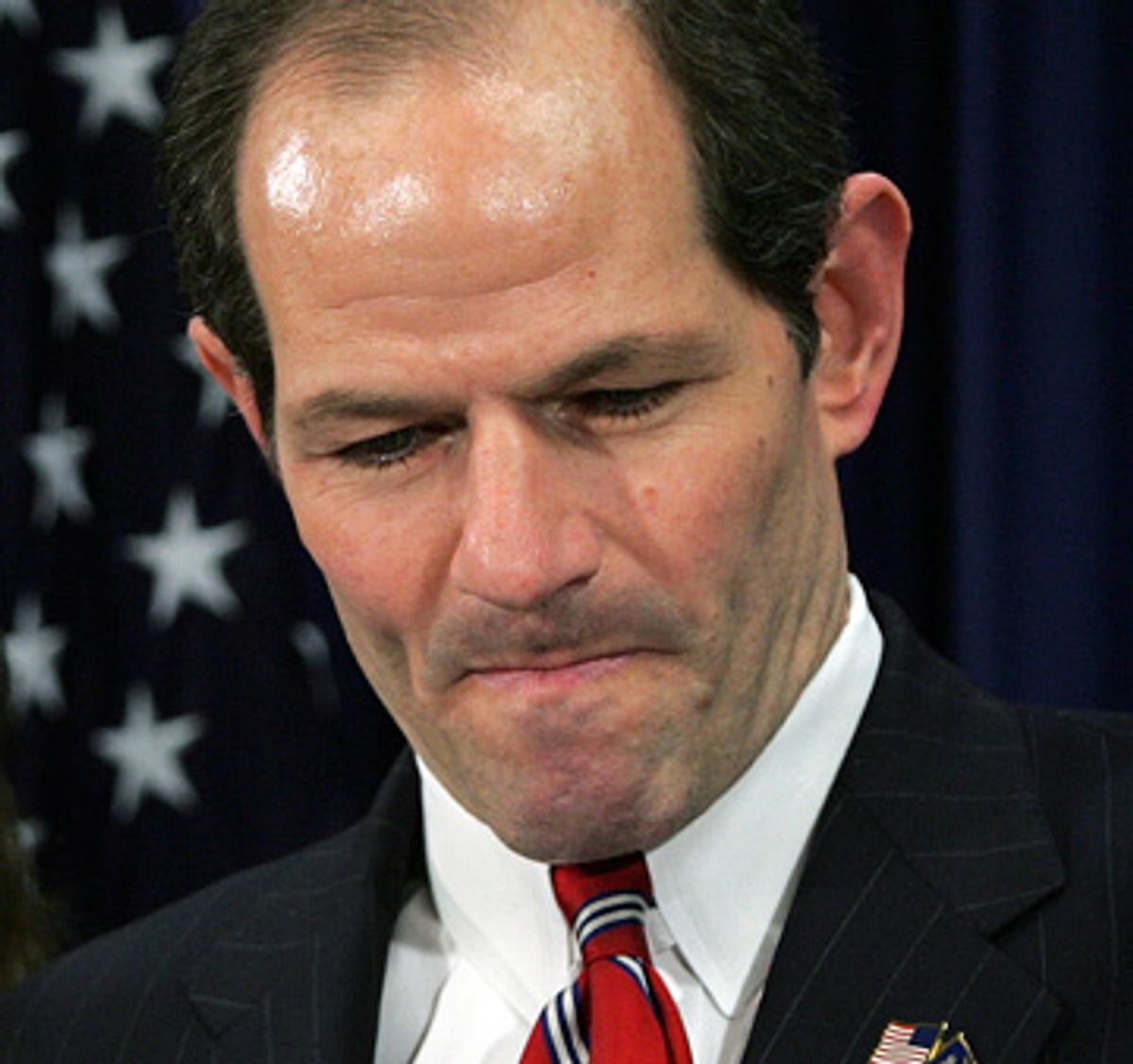 Sadly, the emperor had no clothes. New York's first-term Democratic Gov. Eliot Spitzer turned out not to be the model of rectitude that he seemed. The New York Times revealed Monday afternoon -- and Spitzer immediately appeared to confirm with a brief public apology -- that an FBI wiretap had identified the reform governor as a recent client of an upmarket prostitution ring, the Emperors Club VIP.

Monday night Spitzer had been slated to be the keynote speaker at a dinner honoring New York City teacher's union president Randi Weingarten. Instead, Spitzer spent the evening contemplating the sudden end of his high-flying political career -- all because he allegedly met last month with a prostitute called Kristen in Room 871 of Washington's Mayflower Hotel.

Politically, Spitzer might have survived a sex scandal among consenting adults with no cash changing hands, especially if his wife, Silda, stood by his side as she did during Monday afternoon's 64-second press statement. But beginning in 1999, Spitzer made his reputation as a crusading state attorney general who was more zealous than the Securities and Exchange Commission in prosecuting Wall Street misdeeds. As a former law enforcement official who shut down at least two "sex rings," Spitzer was guilty of the sin of hypocrisy by apparently patronizing prostitutes.

Like a baseball player named as a steroids user, Spitzer offered an apology without ever specifying why he was asking for forgiveness. "I have acted in a way that violated the obligations to my family and that violates my -- or any -- sense of right and wrong," Spitzer said. "I apologize first, and most importantly, to my family. I apologize to the public, to whom I promised better." These words were a far cry from Spitzer's inaugural address, just 14 months ago, when the first Democratic governor for the state in 12 years promised "a politics that asks not what is in it for me, but always what is in it for us."

If Spitzer takes the likely route and resigns, he would be succeeded by Lt. Gov. David Paterson, who would become New York's first African-American governor. Paterson, the former minority leader of the state Senate, would be history-making in another way as well, since he is legally blind. Democratic political consultant Hank Sheinkopf, who was Spitzer's ad maker in his 1998 race for attorney general, said, "David Paterson is a very decent and honorable guy who will rise to the occasion." Late last month, Paterson campaigned with Hillary Clinton at an economic summit in Zanesville, Ohio, joking with her at one point, "Can I call you Madam President?"

New York politics is perpetually a game of musical chairs with too many hyper-ambitious players and too few seats. Andrew Cuomo -- the state attorney general who makes no secret that he would like to follow in the footsteps of his father, Mario, as governor -- tangled with Spitzer last summer over the misuse of the state police in pursuing an overzealous investigation. Spitzer's target had been Joe Bruno, the GOP majority leader of the state Senate. "After Trooper-gate," Sheinkopf said, "Eliot Spitzer's national ambitions were over."

But while Cuomo will undoubtedly soon be thinking about a 2010 gubernatorial race, he may well face a far more formidable foe than Paterson. New York Mayor Mike Bloomberg, who must step down in 2009 because of term limits, has been searching for an executive post worthy of his administrative talents. Albany is a far cry from the White House, but Bloomberg may now want to join Nelson Rockefeller and Averell Harriman in the annals of staggeringly rich New York governors.

When Spitzer triumphed in 2006 with 70 percent of the vote (Hillary Clinton received 67 percent in her reelection that year), he became the first governor in modern memory (aside from maybe Cuomo) with the potential to change the corrupt political culture of Albany. In a way that would make Congress in the hey-day of Tom DeLay seem like the Athenian democracy, the New York state Legislature operates as a rubber-stamping body controlled by Bruno in the Senate and Sheldon Silver, a Democrat, in the Assembly. Spitzer had the dream and the reputation, and he was on the cusp of getting the votes to finally move New York state politics out of the Erie Canal era.

But now it all lies shattered, whatever short-term decision Spitzer makes. Reform politicians who hold themselves up as moral exemplars run the risk of not living up to their own self-proclaimed ethical standards. The financial transaction that was supposedly conducted in Room 871 of the Mayflower Hotel seems so tawdry in light of the glowing portrayal of Spitzer as "Wall Street's Top Cop" on the 2002 cover of Time magazine. The feeling of tragedy is unavoidable as the intense and wired Spitzer has gone from lion to laughingstock in just 14 short months as governor.