The street protests that shaped a new century, recalled in a flawed and exciting docudrama. 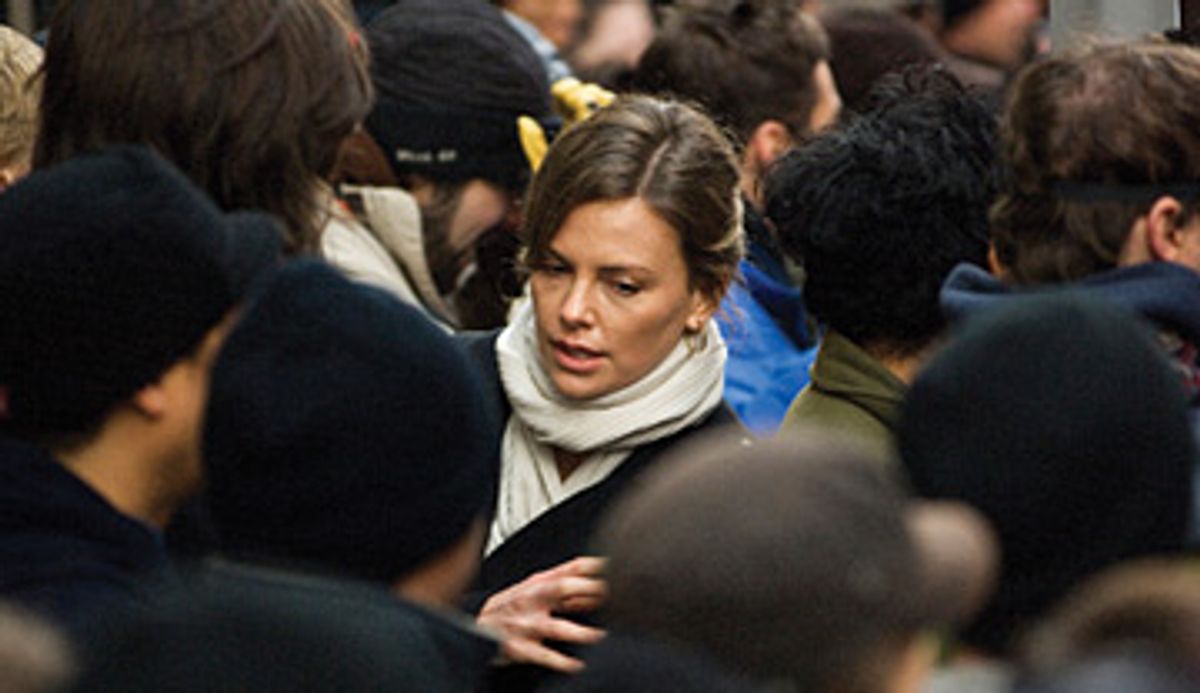 Charlize Theron in "Battle In Seattle."

AUSTIN, Texas -- If you were actually involved with the anti-World Trade Organization protests of 1999, my guess is you're better off not seeing "Battle in Seattle," Stuart Townsend's lumpy, uneven, undeniably exciting docudrama about those crucial events. Townsend's film premiered at Toronto last fall, and enjoyed a rip-roaring, standing-ovation American debut on Monday night at the South by Southwest Film Festival. (It should reach theaters this fall.) Of course Seattle veterans are a tiny percentage of the movie's potential audience, even if it includes several people I know well, and in general I hold the view that dramatists have a far different mission from reporters and historians, and should be held to different standards.

By weaving the stories of a group of fictional characters around actual news footage, Irish actor-turned-director Townsend clearly hopes to revive the spirit and promise of Seattle '99, which seemed to mark the dawn of a new activist age -- an age that ended suddenly amid the rubble of Sept. 11, 2001. In particular, Townsend wants to convey that the "Teamsters and turtles" street protests more than eight years ago were not wasted energy: They caused at least the temporary implosion of the WTO's global free-trade agenda (he argues), and sparked a debate on trade, development and the environment that has only grown in urgency in subsequent years. (What does it tell us that it takes a foreign-born filmmaker, one who didn't even live in America until 2001, to tackle this story?)

Whether or not you accept that political spin, Seattle is an astonishing and dramatic story, one about a ragtag coalition of protesters numbering in the tens of thousands who overwhelmed Seattle police and seized control of the city's downtown business district (where a few protesters smashed store windows, to the undisguised delight of news cameras). Police fought back the next day, with what often looked like undisciplined brutality, clearing the streets and arresting some 600 people. Facing a blitzkrieg of negative worldwide publicity, authorities were rapidly forced to release them all without charge. Just last year, a federal jury found that the arrests had violated protesters' Fourth Amendment rights (a pattern that would continue at protests through the 2004 election, at least).

Townsend's hour-by-hour reconstruction of events from various perspectives, somewhat in the manner of Paul Greengrass' "United 93," is vivid and compelling, and his fictional crowd scenes blend ingeniously with the authentic news footage. Cinematographer Barry Ackroyd, a longtime collaborator of both Greengrass and Ken Loach, has a brilliant touch with this kind of you-are-there agitprop. In broad strokes, everything happens in the right order and Townsend captures the week's major news events.

But the multi-character drama Townsend tries to construct inside and around the Seattle protests is disappointingly conventional (see also: Ken Loach), and really tells us nothing about the protesters, cops, WTO dignitaries and city officials he's striving to portray. Or rather, what he tells us is: Fill-in-the-blanks are people too! Which is a little bit worse than saying nothing.

Various prominent actors move briskly through "Battle in Seattle," but amid all the cacophony only Outkast rapper André Benjamin, delightful as a glib, eccentric African-American animal-rights activist, makes much of an impression. Woody Harrelson is an out-of-control cop. Charlize Theron is his pregnant wife trapped in the protest zone. Ray Liotta is a fictionalized version of Seattle mayor Paul Schell. Connie Nielsen and Channing Tatum play a TV-news crew swept up in the action. But it's with the roles of Martin Henderson and Michelle Rodriguez as protest leaders that Townsend causes problems for his movie that no amount of agitprop intensity and good intentions can solve.

Henderson's Jay and Rodriguez' Lou are sort of meant to be the Tracy and Hepburn of late-'90s post-anarchist activism: They disagree and snarl, they admire each other's ballsiness, they save each other's asses, they fall in love. None of that is well written or well executed, because the movie's center lies elsewhere, and furthermore it's clear that Townsend wrote the film knowing next to nothing about the political and organizational philosophies that drove the core group of Seattle protesters. Jay makes exactly one speech that mentions "affinity groups" and "consensus" (foundational terms in that protest movement), but beyond that he and Lou just seem to be idealistic young Americans listening to an inner voice that tells them to stand up for what's right, dammit.

As I said earlier, movies are not the same thing as history, and nobody would want to see "Battle in Seattle" if it included endless scenes of the logistical training and political debate that characterized the Seattle movement. But not making clear that those protesters were fundamentally opposed to corporate capitalism, all international financial institutions, the U.S. government and the mainstream media -- and that their laborious organizational methods were meant as a tool for revolutionary social change -- is a fundamental distortion of fact that does neither the subjects nor the audience any favors.

This sort of distortion is nothing new in the ever-sentimental American treatment of the past: I'd be willing to bet that schoolchildren are still taught that Rosa Parks was just tired when she declined to give her seat up to a white man that day in 1955. When we tell stories about the past, are they just supposed to make us feel better, or are they supposed to trouble us? Does it matter whether we say the stories are about a lady with sore feet instead of a longtime civil-rights activist, or about youthful Paul Reveres who love their country instead of anti-capitalist revolutionaries?