McCain to media: Let's stay together

Now that he's the nominee, reporters may not get to spend as much quality time with John McCain. Can McCain and the press make a long-distance relationship work? 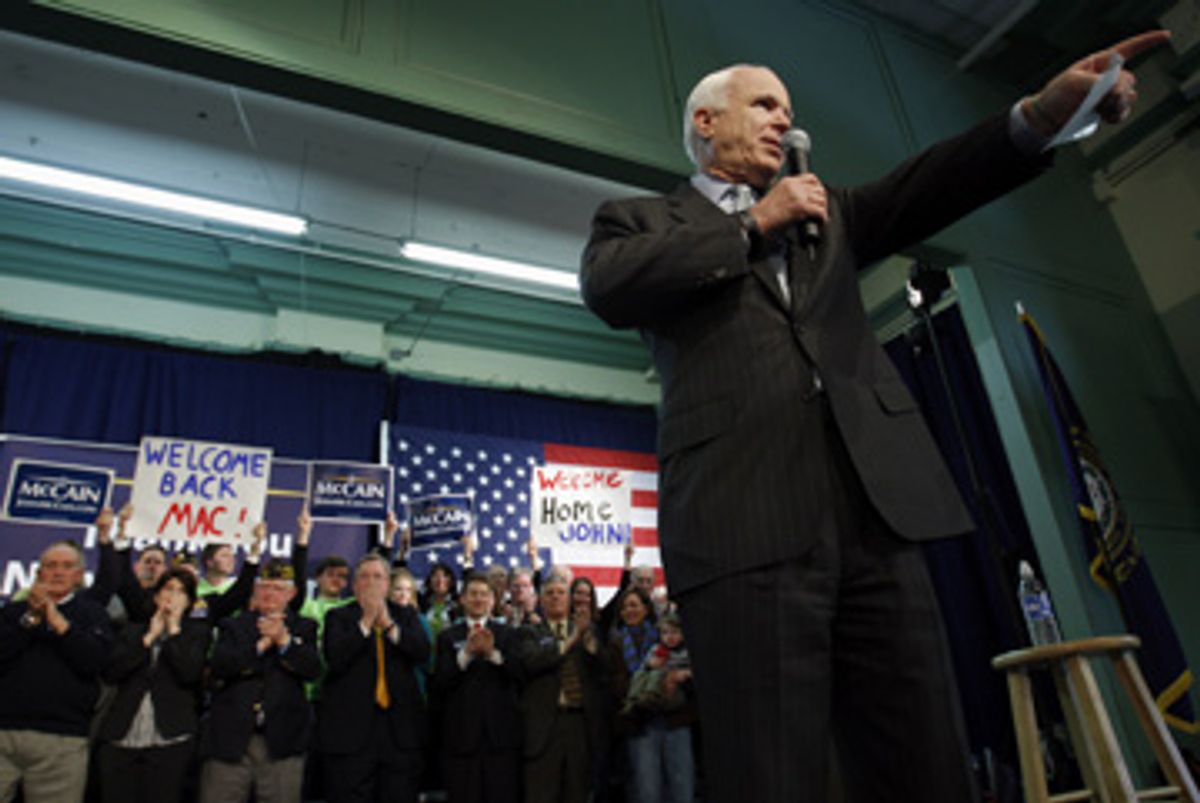 A week after clinching the Republican nomination for president, John McCain came back to New Hampshire to thank voters for putting him on the path that led there, with a campaign stop that could have been straight out of his 2000 run. With snow falling outside, he answered an hour's worth of questions from a packed, hot town hall full of voters. "I really think the town meeting is the environment I enjoy the most," he said afterwards. His visit to Exeter could be one of a dwindling number of chances for him to revel in that environment; when the event was over, he headed dutifully off to the latest in what has become a relentless series of fundraisers.

But there's another environment McCain probably likes even more than town halls -- riding on the bus with the media, for an endless, rolling, mutually advantageous press conference. And now that too could be endangered. Offering reporters the sort of face time no other candidate gives them has clearly reaped rewards for John McCain in both the tone and content of press coverage. But if McCain is forced by the realities of being a presidential nominee to restrict that access, will his portrayal in the media change too?

For months last fall, as his campaign floundered, McCain, a few strategists and a dwindling press corps drove around New Hampshire together. By the time he won the primary here in January, though, the media horde following him had grown exponentially. It had swollen past the point where every reporter who wanted to could ride the "Straight Talk Express," the bus aboard which McCain holds court for hours -- always on the record -- between campaign stops. At this point, a trailing bus carries the press around while McCain, his senior staff and a small handful of reporters ride the original "Straight Talk" coach. Aides try their best to shuttle the media on and off the main attraction, but access to the candidate is more limited than it once was simply by logistics.

Even so, McCain prides himself on being more open with the media than any other candidate. (As do his strategists, who often ask when rivals will start imitating McCain's style with the media, implying, probably correctly, that the answer is "never.") He famously -- or infamously -- hosted a barbecue for the press at his ranch outside Sedona, Ariz., the weekend before sewing up the GOP nomination; on Wednesday, he said he'd like to do another one. And as far as McCain is concerned, he'll keep inviting the press on the bus with him straight up to November. "I have to -- goddamn it," he mock-growled, keeping up a long-running joke where he pretends he doesn't love being surrounded by reporters. "We have to do this. Otherwise it would ... it just wouldn't be appropriate. It just would not be appropriate not to continue what we've been doing for all this time."

The "Straight Talk Express" that McCain rode through New Hampshire and Massachusetts Wednesday was a swankier version than the one he had two months ago, with red velvet couches and slabs of marble holding lights to the walls. Eight reporters, plus Joe Lieberman, squeezed into the back lounge with McCain for an 80-minute trip from Portsmouth, N.H., to Boston, while his press secretary sat in the hallway. But it was a pretty typical ride, and the third such leg on the bus that day. Questions were mostly substantive -- should military leaders, like Adm. William Fallon, who disagree with presidential policy feel free to say so publicly? (McCain: Absolutely, as long as they tell the president in private first.) Should NAFTA be revisited? (McCain: No, but maybe some workers whose jobs went overseas should get compensation.) Some were a little more frivolous -- how will he spend his spare time on an upcoming trip to London? (McCain: Basically, visiting as many museums about wars as his wife, Cindy, will put up with.)

The tone was conversational, and it felt less adversarial than on other campaigns where candidates don't spend as much time with reporters. (Like Obama, for instance, who walked away from a tense press conference last week, growling, "I just answered, like, eight questions.") McCain had already held an informal news conference in Exeter after his town hall, where most of the questions focused on allegations he helped Airbus win a Pentagon contract he had blocked Boeing from getting. When the topic came up again on the bus, McCain went through his defense again -- he wanted an open competition and didn't care who won, as long as it was fair -- without making the discussion into an argument. It was the fourth time reporters had asked him about the deal that day; because he spent most of the day talking to the press, he had plenty of time to try to explain how he saw the situation. The constant access also means, on that issue and on others, that he's less vulnerable to a "gotcha" moment if he answers a question slightly differently once -- he's usually already answered it the way he meant to a dozen times before, and he'll have a chance to answer it again before the news cycle ends.

Beyond those benefits, though, McCain clearly likes having the press around, more than most politicians do. Never mind that he jokingly calls reporters "Trotskyites" and "jerks." When an aide pulled him away from the conversation to make a phone call, he groaned. At his press conference earlier, he took two questions after his spokeswoman tried to end things. Even in the Senate, before he launched this presidential campaign, he would always stop to take questions on his way to or from votes. McCain has had some angry run-ins with the press, but his accessibility goes beyond a mere campaign gimmick.

Engaging in what basically amounts to a full-time press conference for eight months seems tough. His staff is already trying to figure out a way to configure a charter airplane to allow for the informal interaction with traveling reporters that McCain prefers, rather than speaking to a gaggle of media hunched under an overhead luggage compartment. But McCain says he wants to compete nationally with whoever the Democratic nominee is, whether it's Obama or Clinton; it's hard to find the time for 80-minute chats with the press when you're trying to hop from Colorado to Ohio to Florida and get on the local news at each stop. In states like New Hampshire or South Carolina, where the primary campaign camped out for weeks, it was far easier to sit on the bus and schmooze than it will be in the helter-skelter two months after the national political conventions.

It was also easier to do town halls like the one he held in Exeter. McCain is almost congenitally incapable of giving a standard TelePrompTer speech at a tarmac rally, which is pretty much the model for how candidates have spoken to the public since the TV era began. His delivery is often flat, he blinks frequently as he reads the text, and he can't stand the bright lights that the networks need to get decent video, because they mean he can't see the crowd. Aides know it. "We're never going to make him Barack Obama," said Mark Salter, a senior advisor who writes McCain's speeches (and sometimes suffers along with the audience as his boss churns his way through them). "But McCain has a way of communicating, which is in a dialogue fashion." In Exeter, he took questions from a dozen people who he picked out of the audience when he saw them raising their hands; his answers, even as they rehashed stock talking points, came across as far more genuine than when he gives prepared remarks.

But at some point soon, he may not be able to simply show up, talk for 20 minutes and then take questions. (For one thing, the Secret Service doesn't like crowds to be quite as spontaneous as McCain does.) Advisors want to keep his town hall events to fewer than 1,000 people, a sharp contrast with the 20,000-person rallies Barack Obama is already holding. Still, the meetings don't lend themselves easily to hammering away at a daily message. McCain plans to shift to a more traditional set of speeches focusing on policy and his biography in April. More than the town halls, those events help make sure the cable networks have a fresh soundbite when they need one, a critical concern for a campaign that's worried about dropping out of the news as the Democratic race goes on.

Yet even though he grimaces when TV channels relegate his events to a brief glimpse before moving on to the Democrats, McCain knows if any Republican can keep the media focus, it's him. There is no question that McCain starts the general election out on much friendlier terms with the press than either Democrat, despite conservative protests of a liberal media bias. And there's no question that it helps him. When he ran against George W. Bush eight years ago, McCain joked that the national media was his base. Then, the press wasn't quite enough to carry him through the campaign. This time around, facing a Democratic nominee who will almost certainly have more money and more enthusiastic supporters than he does, McCain may need that base even more.