What the Poling autism case means

The widely publicized court victory for the family who claimed vaccines caused autism in their daughter does not prove a link. 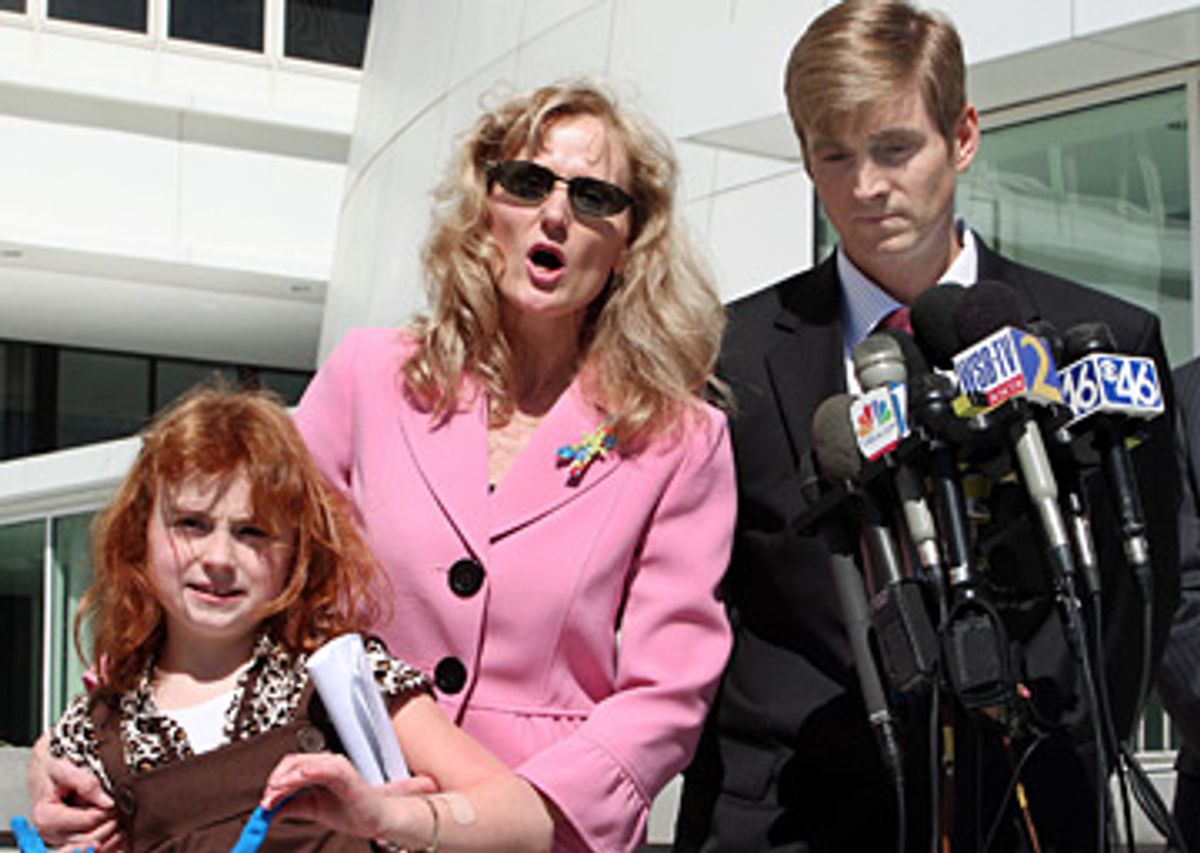 For the past decade, advocacy groups have claimed that vaccines cause autism, a behavior and language disorder, in children. At the center of the debate is a compound called thimerosal, a mercury-based preservative that was used in most vaccines until around 2001. Many of the advocates, including Robert F. Kennedy Jr. in Salon, have accused doctors, drug companies and the federal government of hiding the truth about thimerosal and its connection to autism.

Despite the charges, multiple studies have demonstrated no connection between thimerosal (or anything else about vaccines) and autism. In the past nine months alone, at least three studies have shown that thimerosal has no relationship to autism or any other neurological disorders. One study, published in the January issue of Archives of General Psychiatry, looked at autism rates in California after the removal of thimerosal. Not only did the rates not go down, they continued to rise. For these reasons, the government and most doctors stand by the belief that vaccines are effective and safe.

However, last week, the U.S. government awarded compensation to a Georgia family, the Polings, who had sued the government (along with 5,000 other families whose children have autism), claiming vaccines had caused autism in their now 9-year-old daughter, Hannah. As the decision made headlines, antivaccine groups claimed victory and vindication, and parents fretted over whether to vaccinate their children.

This is the real danger of this case. As a pediatrician, I hate to see parents pass up the chance to give their kids vaccines, which have saved countless lives, prevented some of the deadliest diseases in human history and remain safe. So what should we make of the Poling decision? Let me take it one point at a time.

What did the government decide?

For many years now, the federal government has set aside funds for children who have been injured by vaccines. Doctors and other health professionals can report adverse outcomes to the government, and parents can file claims in federal "vaccine court." The court's judges, known as special masters, review claims. If they find a child was injured by a vaccine, they award compensation to that child.

In this case, "CHILD [Hannah Poling] v. Secretary of Health and Human Services," the court "concluded that the facts of this case meet the statutory criteria for demonstrating that the vaccinations CHILD received on July 19, 2000, significantly aggravated an underlying mitochondrial disorder, which predisposed her to deficits in cellular energy metabolism, and manifested as a regressive encephalopathy with features of autism spectrum disorder. Therefore, respondent recommends that compensation be awarded to petitioners."

Does that mean vaccines caused Hannah to become autistic?

No. Look again at the court statement: Hannah has "an underlying mitochondrial disorder, which predisposed her to deficits in cellular energy metabolism, and manifested as a regressive encephalopathy with features of autistic spectrum disorder." Throughout the document, both Hannah's doctors and lab results support the diagnosis of mitochondrial disorder.

Not a diagnosis of autism?

Right. Mitochondrial disorder does not equal autism. Generally speaking, mitochondria are the parts of our cells that help generate energy. When they fail, the body's cells go awry, which can lead to failures in any number of normal body functions. There are at least 40 known mitochondrial disorders, and probably many more we haven't yet found. But it's clear from the transcript of the court's decision that this was not a case of vaccines causing autism. Rather, this is a case where the court deemed it plausible that vaccines aggravated an underlying disease caused by bad mitochondria, and that some of the symptoms Hannah showed were similar to autism. As you'll see below, there are even questions about that conclusion.

Advocacy groups, which maintain that vaccines did cause Hannah to develop autism, point to two things in the court's statement. One is the phrase "features consistent with autism spectrum disorder"; the second is an evaluation by a team at the Center for Autism and Related Disorders. The document states that clinicians Alice Kau and Kelley Duff believed Hannah was "developmentally delayed and demonstrated features of autistic disorder." One thing that's not clear in the document is what kind of "clinicians" these two individuals are. Were they expert enough to consider a metabolic disorder like mitochondrial diseases when they evaluated Hannah? That's a fundamental question: Clinicians (doctors or otherwise) must consider not just the obvious diagnosis, but a differential set of diagnoses as well. Because the government has not released details of the case, which remain sealed according to court rules, we do not know what evidence Kau and Duff relied upon to reach their conclusion.

It's worth noting that the Poling case is not as rare or newsworthy as it may appear, as it is not the first time the vaccine court has reached the conclusion to compensate a child with autismlike symptoms. Kathleen Seidel, a librarian and mother of a teenager with "autism spectrum diagnosis," maintains Neurodiversity.com, a comprehensive Web site on autism research. She notes nine prior cases "in which compensation was awarded for the lifelong care of children and young adults who were diagnosed with autism or related conditions after they sustained documented, verifiable vaccine injuries." However, she adds, "the autism diagnosis followed the development or aggravation of profoundly disabling physical conditions," and "in no instance has the VICP [Vaccine Injury Compensation Program] awarded compensation to cognitively disabled individuals who were not also physically disabled."

Is autism related to mitochondrial disorders?

It could be. But this question needs a lot more study. Could there be kids walking around who carry the diagnosis of autism, or some other unspecified developmental disorder, who have a mitochondrial disorder? Absolutely. Does it mean all kids with autism should have testing for mitochondrial diseases as part of their evaluation? Maybe, but we need more research to see what the link is before make it part of evaluating all possible cases of autism.

As for vaccines and mitochondrial diseases, Chuck Mohan, executive director of the United Mitochondrial Disease Foundation, said last week: "There are no scientific studies documenting that childhood vaccinations cause or worsen mitochondrial diseases, but there is very little scientific research in this area." Again, until the court reveals the details of the case, there's no way to know how the special masters deliberating this case reached their decision

So how do you know a child has autism?

Autism is what we call a clinical diagnosis, in which doctors make a diagnosis based on a constellation of symptoms they observe. Unfortunately, there is no specific lab test we have to objectively diagnose it. The importance of this is that kids may have disorders that present with symptoms that are similar to autism.

For example, kids with mental retardation or cerebral palsy can have autistic features. In the case of kids who are developing normally and suddenly regress into autismlike symptoms, there are other examples. Rett syndrome is one such case. According to the National Institutes of Health, it is a "childhood neurodevelopmental disorder characterized by normal early development followed by loss of purposeful use of the hands, distinctive hand movements, slowed brain and head growth, gait abnormalities, seizures, and mental retardation." It goes on, and here is a key point: "Individuals with Rett syndrome often exhibit autistic-like behaviors in the early stages."

Let's look at the simple example of fever. Fever is a symptom whose underlying cause may be any number of things -- ear infections, pneumonia, certain cancers or autoimmune disorders like lupus. In that sense, the language or behavioral problems that we increasingly associate with autism could easily be manifestations of other neurodevelopmental disorders. But unlike fever, there are very few tests we have for language and behavioral problems to help us get to the bottom of them, which makes the diagnosis much more subjective. In Hannah's case, it appears that experts initially felt she was autistic, but once further testing was done, they ably and accurately determined she has a mitochondrial disorder.

So if it's not autism and nobody knows whether vaccines cause mitochondrial disorders, why did the court come to this conclusion?

That's not clear, as the details of the case and its deliberation remain sealed. But here are some issues to ponder. Experts tell us mitochondrial disorders can be aggravated or unmasked by illness; an individual's mitochondria will only go awry when there's stress placed on the body. The court document mentions a series of illnesses Hannah developed between her diagnosis of mitochondrial disease and after her vaccines. Two of these events occurred within the expected timeline for a vaccine reaction. One -- fever and irritability -- seemed to be a reaction to the diphtheria, tetanus and pertussis vaccine. This is a rare but well-known side effect of that vaccine. The second was a fever and a rash that were diagnosed as a reaction to the chickenpox vaccine.

But Hannah had other many other infectious illnesses in that interval, which were well beyond the timeline of vaccine side effects. Could these subsequent illnesses have been the culprit, the aggravating factor, that tipped her into her disorder, instead of vaccines? It wouldn't be unreasonable to conclude this.

What should parents do now?

Vaccinate their children. Even the Polings aren't disputing the benefits of vaccines, as they said on CNN last week. If parents are nervous about one or more shots, spread them out. That's fine. Check out reliable vaccine Web sites like the Institute for Vaccine Safety or the Children's Hospital of Philadelphia's Vaccine Education Center. Read the vaccine information your pediatrician is supposed to provide to you as well.

I also have some advice for government, whose efforts to reassure the public about vaccine safety need vast improvement. Unseal the documents of the Poling case so the public can hold officials accountable for the decision. Otherwise, too many people will continue to believe that vaccines are autism's smoking gun.