Mirror, mirror on the Wall

Why we care where Silda Wall Spitzer stands. 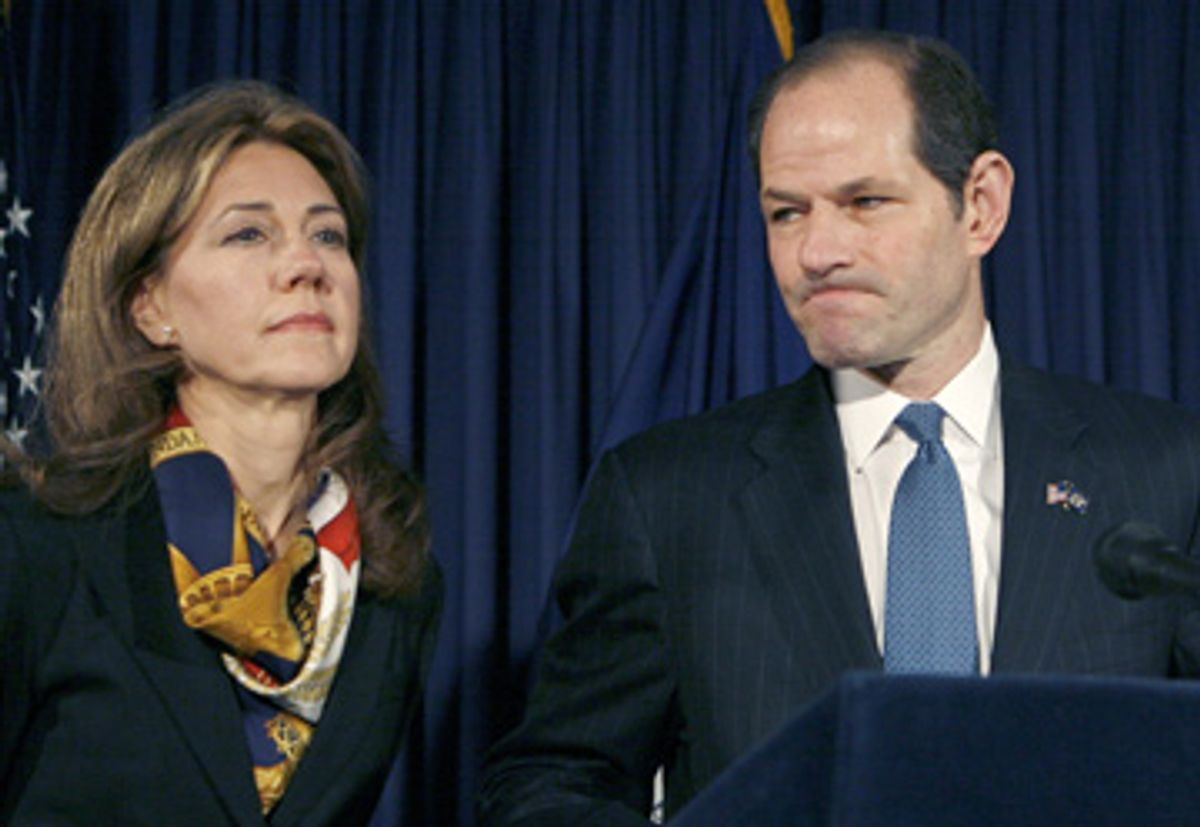 There stood Silda Wall Spitzer again on Wednesday morning, next to her husband as he announced his resignation as New York governor after having been caught in a federal probe that identified him as a patron of a high-end prostitution ring. The 50-year-old Wall Spitzer, a Harvard Law School graduate who gave up her legal career to raise the couple's three children, looked oddly engaged in every word her husband was saying. As he spoke about his belief that people, regardless of their position or power, must take responsibility for their conduct, his wife's eyes flitted from his printed remarks, to his face, to the press gathered in front of them, at one point even offering raised eyebrows and a small smile of greeting to someone in front of her. When her husband invoked her name, Wall Spitzer stared directly at the cameras, placidly defiant, as if politely daring all those who have been chattering about her for three days to ask yet again: Why the hell is she standing next to him?

Why, why, why, why? What could this well-liked and accomplished woman be thinking, appearing next to her hooker-loving, condom-eschewing husband? These are the questions we haven't been able to stop worrying ever since Monday's initial press conference, when Silda appeared next to her disgraced (and grumpy) spouse, looking absolutely decimated. I've had friends call and rant to me about it. "Why does she have to do the perp walk?" said one. "Why doesn't he suggest that since she wasn't with him when he paid thousands of dollars to have unprotected sex with prostitutes, maybe she shouldn't have to have her face stamped forever on the image of his shame and ruin!" According to this line of thought, letting her off the hook for this particular photo op might have been the -- let's not say chivalrous, or even classy; let's just say civilized -- thing to do. Of course, that scenario ignores the possibility that Eliot did offer her a pass and that Silda insisted on remaining at his side.

On Wednesday, another friend called me, irate about this observation from an unnamed political consultant in the New York Times: "Quite frankly, if [Wall Spitzer] is not standing there, the first question everyone will have is: Why isn't she standing there?"

"Why wouldn't she have been standing there?" said my friend, spluttering slightly. "Uh, maybe because he spent tens of thousands of dollars on hookers? Maybe because now the whole world, not to mention her entire family, now knows about it? Maybe because he's a lying sack of shit? Maybe because he humiliated her and just flushed her life and her children's lives down the toilet?"

It seems pretty clear that some people -- many people, if the amount of coverage this angle of the story has received –- are taking this very personally, projecting on Silda Wall Spitzer a reflection of their own experiences, fears and concerns.

Dina Matos McGreevey, who stood next to ex-husband Jim when he resigned as governor of New Jersey, penned a New York Times Op-Ed called "Stand by Yourself." At Slate, Anne Applebaum wrote that as a political wife herself, standing by your man was the best way to get an ordeal over with. Feminist author Linda Hirshman pointed out that Wall Spitzer's situation exemplifies the argument that it is a bad idea for successful women to put all their eggs in a man basket and quit their jobs. Even Samantha Bee of "The Daily Show" sent up the spousal-support-pose through the prism of her own marriage, asking husband Jason Jones to stand behind her as she confessed to a series of imaginary sexual transgressions.

Wall Spitzer, who has often been compared to Hillary Rodham Clinton, seems to be suffering from an affliction Clinton has endured for nearly two decades now: over-identification.

In some social circles, Spitzer's bad behavior has set off hoary hypothetical conversations that hark back to those provoked by Bill Clinton's decade-old dalliance with an intern: Do all men cheat? Of course they don't, any more than all women do, but stories like the Spitzers' are exactly the kind that arouse the most pernicious kinds of gendered paranoia.

From single women worrying that they will never meet a man they can trust, to those who have felt flickers of doubt about a mate's fidelity, Wall Spitzer's dilemma is prompting an ugly question: If a man like Eliot Spitzer was seeing prostitutes, what man isn't engaging in deception? For those seeking predictors about a man's potential for fidelity and dependability, a lifetime dedication to the eradication of corruption, including prostitution, would seem to augur pretty well. Who less likely to behave badly than a man whose entire professional identity rests on his reputation as Mr. Clean?

Then again, who more likely to patronize prostitutes than a man who patrols the borders of moral rectitude with a tenacity that should have tipped us all off to the possibility that he was making night flights to wallow in the loamier regions of human behavior? How different is this from those warriors of the religious right who try to prevent gay marriage all while getting massages from male prostitutes or assuming a wide stance in airport restrooms? We don't think twice about their misbehaviors except to gloat a little: It all fits a psychological profile. But many of us had never thought to apply that profile to a soldier of the socially liberal and liberated left. And for this, we are smacking ourselves on the forehead and screaming uselessly at Silda Wall Spitzer to step away from the douchebag.

This is what differentiates Wall Spitzer's situation from those of Lee Hart and Dina McGreevey and Suzanne Craig and Hillary Clinton and others who have dutifully taken their place at their spouses' side: We are utterly agog, and ashamed at ourselves for being so surprised. The closeted gay officials, the known horndogs, the alpha-dog political machers who can't help but help themselves to a little nookie once in a while –- they may dismay or disappoint or sadden us, but they are clichés of morally corroded power brokering as old as morally corroded power brokering itself.

But the "Holy shit!"s that echoed between office cubicles throughout New York state on Monday were authentic: Eliot Spitzer was a known hothead, sure. But this was a guy who built his career busting the bad guys, cockily steamrolling over those so powerful that they behaved as if they believed themselves above the law. And many of us who had voted for him bought it, thought him a nice Jewish boy with a foul temper who at heart wanted New York and the United States to be better off. And we're incredibly pissed off at him for making us feel stupid and naive.

And so, from the very comfortable distance of not being married to the guy, we've quickly merged our own experience with that of Silda Wall Spitzer, whose reactions to this story we cannot, of course, even begin to guess at.

But never mind that the terms of a marriage are knowable only to the two people in it; Silda Wall Spitzer has been pushed into the realm of public consumption and is now subject to the scrutiny, self-doubt and recrimination of the entire nation. As if she didn't have enough to worry about this week.

Video: On standing with her man