"Dr. Seuss' Horton Hears a Who" 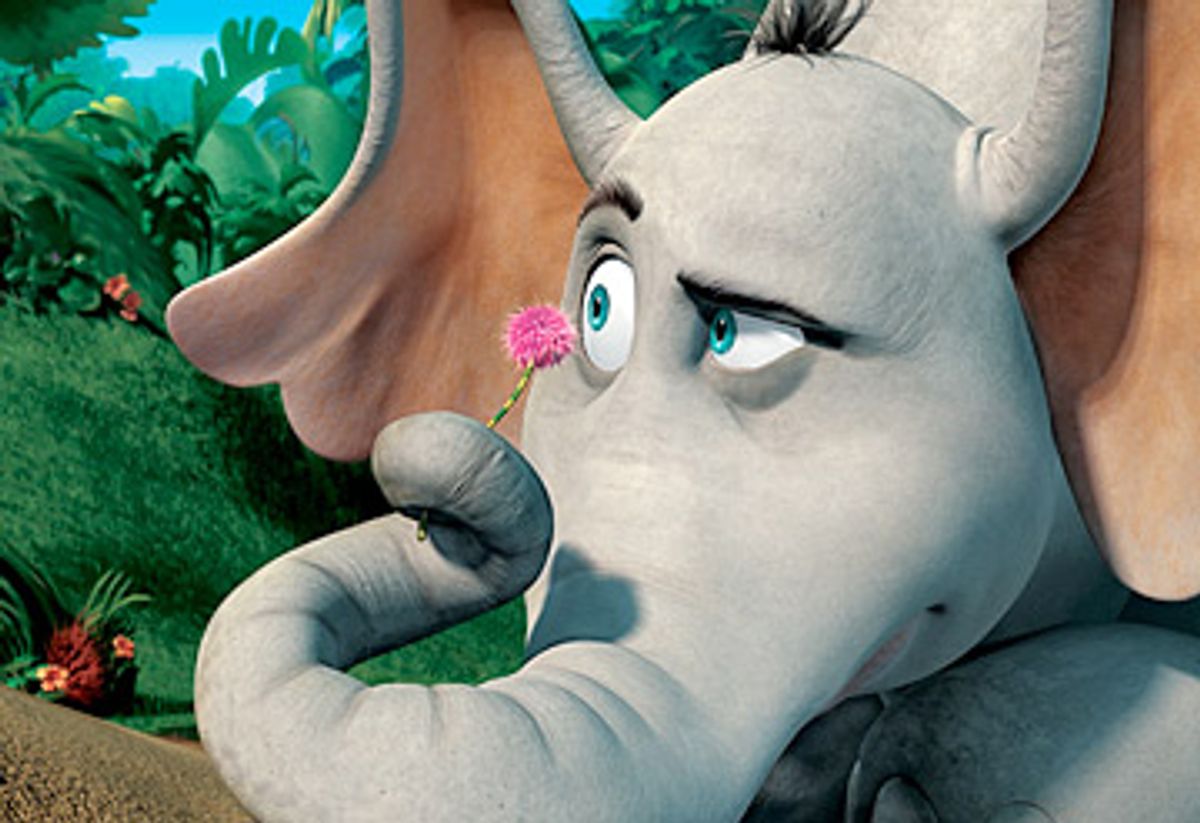 It begins with the trajectory of a speck. We watch as it floats through the jungle of Nool, a wisp of nothingness that's a self-contained planet in its own cosmos. It's a dot, on a clover. But as Theodore Geisel knew -- and any child will affirm -- size has no bearing on significance.

The big-screen adaptation of "Horton Hears a Who!" doesn't have the brisk economy of the original book, but the animated Horton feels nevertheless close to the sweet, quirky heart of Dr. Seuss. It isn't just an amusing diversion for a rainy Saturday afternoon (which, face it, is the reason kid movies exist) either -- it's a feature-length reparation for the appalling live-action versions of Seuss' books we've endured over the last few years.

The world of children's literature is rife with chaos and cruelty, and both "Dr. Seuss' How the Grinch Stole Christmas" and "The Cat in the Hat" focused on rather shady protagonists. Perhaps that's why those films (and, likewise, "Charlie and the Chocolate Factory") weren't runaway hits -- the guy who creeps you out for the length of a bedtime story can be downright exhausting for the duration of a film.

"Horton," in contrast, offers not one but two tender, protective, occasionally befuddled heroes. There's the pachyderm title character (the voice of Jim Carrey), beloved by the children of Nool and gently insistent that "an elephant's faithful, one hundred percent." So what's an easygoing guy with the biggest ears in the jungle to do when he hears voices coming from a fleck of dust?

And down on that fleck, there's the mayor of Whoville (Steven Carell), who's been promoted from his rather minor role in the book to full-fledged costar status. Neither of them is looking for trouble. They certainly aren't looking for an existential conundrum. Yet there they both are, questioning their sanity, not merely pondering whether something unfathomable is out there, but whether that something believes in them.

The cast, in typical big-budget CGI kid-movie fashion, is composed of genuinely talented comic performers who also happen to be draws to parents, based largely on their R-rated oeuvres. (The film's references to "Apocalypse Now" and MySpace aren't for the 5-year-olds either.) "Knocked Up's" Seth Rogen is Horton's cautious mouse pal, "Wedding Crashers'" Isla Fisher is a Who scientist, and spouses Will Arnett and Amy Poehler swoop in as a nefarious eagle and the mayor's doting missus, respectively. In the leads, both Carrey and Carell bring a gentle likability to their often manic, panic-stricken characters. Horton and the mayor are kindred spirits, and the two actors have a warm rapport. Both are yearning for contact.

Why wouldn't they be, given the wonders of each other's worlds? One of the greatest pleasures of the film is its visual density. Directors Jimmy Hayward and Steve Martino saturate Horton's jungle with silvery waters and lush vegetation, and cram Whoville with big-haired characters and complicated contraptions. They create staggeringly beautiful moments, as when Horton confronts a seemingly limitless field of clover, a purple carpet that hides the infinitesimal world of the Whos.

In expanding the tale to movie length, the filmmakers have had to invent several subplots and supporting characters. Purists might take umbrage with a few of the liberties screenwriters Ken Daurio and Cinco Paul have taken, including the loss of most of Seuss' trademark bumpity rhythm and the inclusion of gags about eating rainbows and pooping butterflies, but most of the new material melds surprisingly well with the author's to-thine-own-self-be-true ethos.

The pivotal character Jo-Jo is now the mayor's son. And he isn't just a taciturn pipsqueak -- he's the sullen, lank-haired Who version of Paul Dano's mute "Little Miss Sunshine" character. Without saying a word, he clearly loathes the notion of following in his father's career footsteps. Yet, like his dad, he can't help looking out at the sky for inspiration and answers -- his secret hangout is an observatory.

Meanwhile, back in Nool, the kangaroo (Carol Burnett, vocally chewing the digital scenery with aplomb) is both a neighborhood busybody and a sanctimonious authoritarian who "pouch-schools" her stifled child to shield him from corrupting ideas. "If you can't see, hear or feel something, it doesn't exist," she asserts, and soon she's turned most of the jungle into a boiling oil-bearing mob. The unknown, in their society, is a dangerous thing, and the consequence of inquiry is destruction. When Horton, master of meta, counters that perhaps this existence is just a speck on someone else's clover, he offers his young audience its first taste of philosophy.

For all of "Horton's" ideological musing, though, the film never strays too long from the kid-friendly imperative for slapstick. Staples fly into faces; characters catapult into cliffs. There are also moments of pure inspiration, as when Horton heroically imagines himself the wide-eyed, not-quite-synced-up star of an anime adventure. If Pascal's "Pensees" were a Looney Toon, it'd look a lot like this.

The film is no overcaffeinated Narnia-like religious allegory, though. Horton and the mayor aren't hearing things. When the burden of proof falls to each of them, they scramble to produce hard evidence. And it's a nice touch, one not in the original story, that the first person to believe the mayor is a scientist. "Horton" may owe a debt to the notion of childlike belief, but any movie that fills Whoville with ladders that look like DNA strands and shows sound waves pulsing through the atmosphere is a movie that celebrates reason. It's probably not a coincidence that it's from the creators of the "Ice Age" films, which gave pretty wide latitude to Darwinism. It's not about faith, really. It's about the hope none of us ever outgrow -- the wish that when we shout to the skies or to ourselves that "We are here, we are here, we are here," someone, somewhere is listening.