"Diving Bell" star Mathieu Amalric dazzles in the dark corporate thriller "Heartbeat Detector." Plus: What the heck do you make of "Funny Games"? 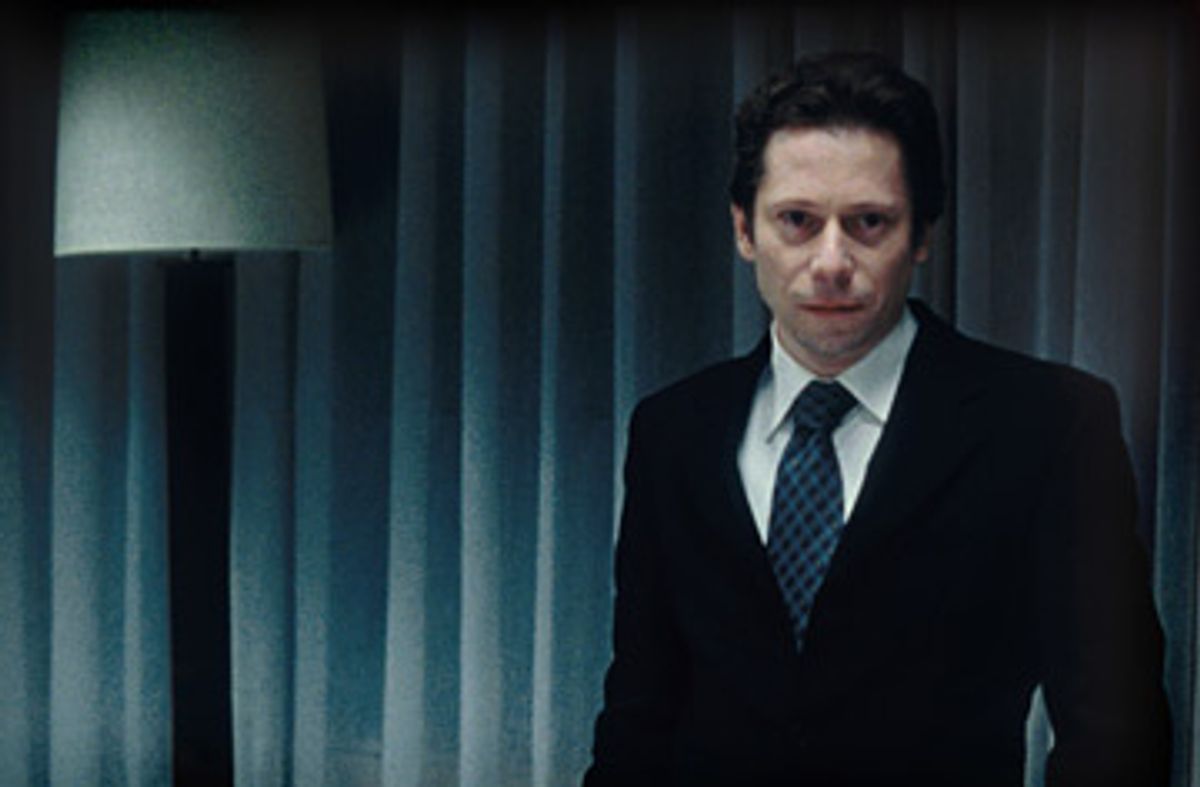 I'm back from SXSW and checking in a bit late on the weekend's new films. Those of you eager to debate Michael Haneke's American remake of his diabolical 1997 mindfuck "Funny Games" -- a horror film equally devoted to attacking its own genre and alienating the audience -- should note that I reviewed it from Sundance, in a post that got buried under an avalanche of festival coverage. Seriously, if you've seen it, and have some thoughts, or a viable theory on the value of meticulously copying a 10-year-old movie whose shock value has necessarily dissipated, I'd love to hear feedback.

Speaking of movies that mess with your perceptions, can we slam the brakes on a calendar full of new releases, festival news, the historic triumph of the Blu-ray format and the imminent and total collapse of the American economy and talk about French director Nicolas Klotz's amazing "Heartbeat Detector"? (A limited release from New Yorker Films, it just opened at two New York theaters and may reach other cities before DVD release.) If you're a fan of Hitchcock, of Kubrick, of the kind of thriller that has the implacable mystery of great sculpture or great architecture, of movies that create their own visual, aural and symbolic universe and suck you bodily into them -- well, you've simply got to see this.

Mathieu Amalric, the tremendous actor who plays the paralyzed Jean-Dominique Bauby in Julian Schnabel's "The Diving Bell and the Butterfly," stars here as a man battling a very different kind of paralysis. Amalric plays Simon Kessler, a corporate psychologist who works in the Parisian subsidiary of SC Farb, a major German multinational that apparently manufactures chemicals. From its very first frames -- images of dark-suited corporate executives as they move into, through and back out of the men's room -- "Heartbeat Detector" works on so many levels at once that its power is difficult to capture. To begin with, Klotz captures the antiseptic, geometric cool of the 21st century European business world with almost surreal clarity. It's a zone of conflict from which all blood and emotion have been purged. Simon, who combines the roles of levelheaded rationalist and swinging bachelor, has become one of its lesser ninjas.

But things just aren't right at Farb, and things in "Heartbeat Detector" (adapted from François Emmanuel's novel by Elisabeth Perceval, Klotz's partner and collaborator) don't move in conventional fashion either. Klotz disrupts the hypnotic rhythms of corporate life with unexplained, sensory-overload musical interludes, as when Simon accompanies his girlfriend Louisa (the soulful Laetitia Spigarelli) to an impromptu concert of Spanish and Portuguese songs, or travels with a group of co-workers (among them another girlfriend, the seductive Delphine Chuillot) to a remote all-night techno rave where he suffers a breakdown. By then Simon has plenty of reasons to break down, mind you, and his lonely odyssey through the wasteland of capitalist Europe has begun to seem more symbolic than real.

Farb's No. 2 executive, the cadaverous Karl Rose (Jean-Pierre Kalfon), has asked Simon to look into the mental health of CEO Matthias Jüst (played by the great Anglo-French actor Michael Lonsdale), who's been behaving erratically. But the more Simon learns about Rose and Jüst, the latter a longtime amateur musician who now experiences Schubert's famous quartet "Death and the Maiden" as physical torture, the murkier their history seems -- and the more treacherous Simon's own pseudo-scientific, pseudo-rational vocabulary becomes.

While each of the symbolic elements in "Heartbeat Detector" is unremarkable in itself, it's the way they accumulate and what Klotz and his cast, especially Amalric and Lonsdale, manage to make of them that renders the film so ominous and mind-bending. There's nothing strange about a German company operating in France; economic cooperation between Western Europe's long-quarreling neighbors has fueled the peaceful reshaping of that continent from the 1950s onward. But the circumstances surrounding Farb are suggestive and troubling: German executives at a chemical company bossing around subservient French underlings, and talking about the human beings they manipulate in dispassionate, clinical language. Simon himself is a Frenchman with a German name; he comes from Strasbourg, a long-contested city annexed by the German Empire in 1871 and again by the Nazis in 1940.

I know where you think this is going, but no, there isn't exactly a buried Nazi secret at the heart of "Heartbeat Detector." OK, there kind of is, but not in a narrow, causative sense. If we call this film a psychological thriller, the accent is on the first of those words, and don't expect some factual revelation that's going to unlock all the story's secrets. Even older Germans like Rose and Jüst are too young to be directly culpable for historical crimes more than 60 years in the past. Whatever tenuous connections these men may have to the "Black Order" of 1933-1945 cannot explain what is wrong with 21st century corporate capitalism -- but they may remind us that Farb and companies like it all over the world have inherited a mode of neutral, analytical, purportedly rational discourse that comes with a tainted history, to say the least.

Even what I just wrote makes it sound like "Heartbeat Detector" is delivering moral lectures, when Klotz's potent blend of sound and vision is deliberately ambiguous, and so is Amalric's amazing performance as a man peeling himself like an onion in search of something authentic or meaningful. (The French title of the film, and Emmanuel's novel, is "La Question humaine," a self-translating phrase that Jüst uses to ironic effect. There turns out to be a viable and even devastating resonance to the English title. I could tell you, but then I'd have to kill you.) Like most genuinely challenging new French cinema -- e.g., the work of Claire Denis, Anne Fontaine, Delphine Gleize, Gaspar Noé, etc. -- "Heartbeat Detector" has next to no chance in a foreign-film market conditioned to the familiar, the comfortable and the lightweight. Track it down. You won't be sorry.