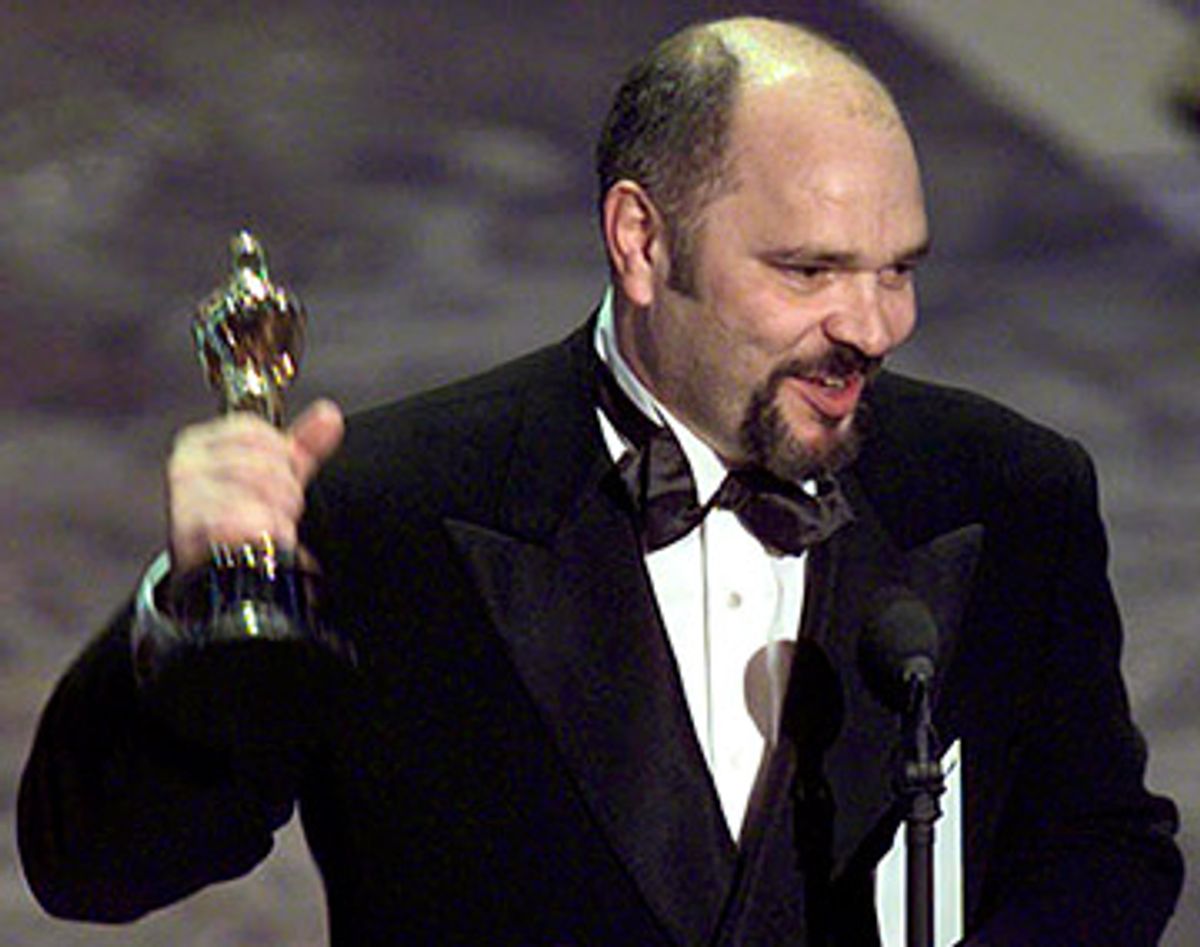 Director Anthony Minghella after winning the Oscar for best director for his movie "The English Patient" in March 24, 1997. Minghella died in London at the Charing Cross Hospital after suffering a fatal hemorrhage.

English writer and director Anthony Minghella has died at age 54, according to various news reports. It's a sad and early departure for one of the best-loved figures in the British film industry. Minghella was chairman of the British Film Institute, where he had vowed to stem the outflow of British talent to the United States. He won the 1997 best-director Oscar for "The English Patient," an international hit that launched a new wave of high-gloss, star-studded literary adaptations. His other films as a director included "Truly Madly Deeply" in 1990, "The Talented Mr. Ripley" in 1999 and "Cold Mountain" in 2003. Minghella apparently underwent surgery for a growth in his neck last week at Charing Cross Hospital in London. He had seemed to be recovering normally, but suffered a fatal hemorrhage early on Tuesday morning.

Minghella had recently completed a 90-minute pilot episode of "The No. 1 Ladies Detective Agency," a planned television series based on Alexander McCall Smith's best-selling novels about a Botswanan female detective. The program is scheduled to premiere this weekend on BBC One in Britain, and has been acquired for U.S. broadcast by HBO. He was reportedly close to beginning production on his next film, "The Ninth Life of Louis Drax," which he had adapted from Liz Jensen's novel and was planning to shoot in California. It's too early to know whether that film will be scrapped, or possibly made with another director.

I'll set aside my own mixed assessment of Minghella's work and observe that he had an unerring eye for projects that combined big-screen cinematic spectacle, a literary pedigree and wide appeal among upscale audiences. He saw himself first and foremost as a storyteller, and had few artistic pretensions. Unlike so many people in his trade, Minghella was universally well liked on both sides of the Atlantic. Former British prime minister Tony Blair, who worked with Minghella on a 1995 campaign video and became his friend, told the BBC: "Anthony Minghella was a wonderful human being, creative and brilliant, but still humble, gentle and a joy to be with. Whatever I did with him, personally or professionally, left me with complete admiration for him, as a character and as an artist of the highest caliber."

The son of Italian immigrants who owned an ice cream factory, Minghella was born on the Isle of Wight in 1954. His brother Dominic and sister Edana both work as writers for British television. He is survived by his wife, the choreographer Carolyn Choa, and two children, one of them the actor Max Minghella, who appeared in "Syriana" and "Art School Confidential" and is now a student at Columbia University in New York.

Beyond The Multiplex Directors Movies R.i.p.