This hypnotic, angular thriller about sex, murder, betrayal and money takes you on a feverish journey from nowhere to somewhere. 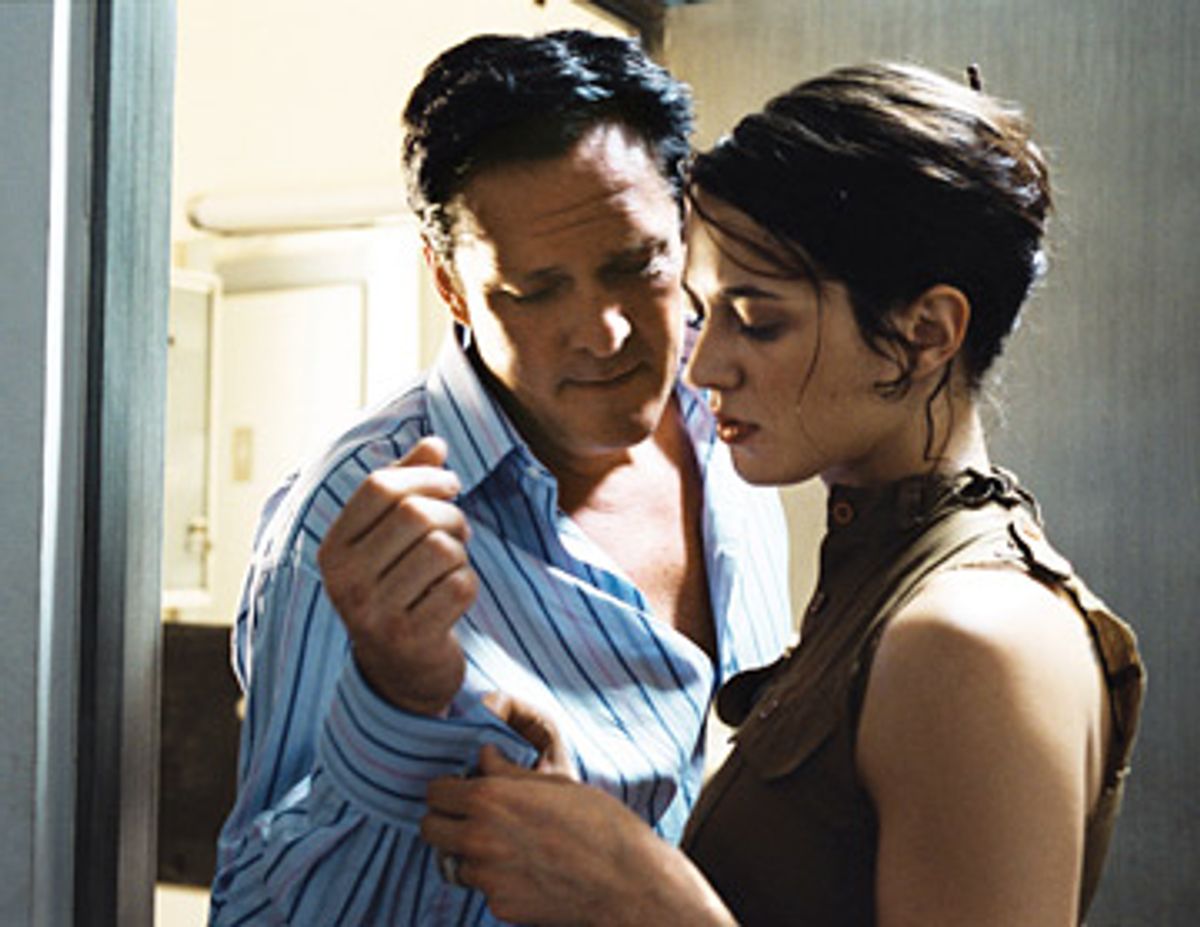 In an early scene in Olivier Assayas' hypnotic, angular thriller "Boarding Gate," Asia Argento, as the ex-lover of Michael Madsen's international business tycoon, reflects on the wild times the couple used to have in bed: "You got hard when you talked to me about what we were going to do," she says in a narcotized drawl, "but less when we actually did it." The line is wistful, accusatory, a terse catalog of promises made and immediately broken. Madsen's character is incapable of making the leap from intention to reality -- his name may be Miles, but it's obvious he can't go the distance. Argento's Sandra, on the other hand, is a girl who's ready and able to shuttle between worlds. A former prostitute, she's both desperate and confident, sexually aggressive and vulnerable, scruffy and pure. She's an urchin Madonna, a wanderer with a slouchy gold handbag instead of a halo; she's the movie's spirit of movement and freedom, and the patron saint of its dislocation.

"Boarding Gate" is a movie that fits nowhere, one that leaves you feeling the world is not quite right and your place in it is even more uncertain. As I left the screening, I heard two puzzled viewers struggling with some of the specifics of the plot, which involves sex, murder, betrayal and money. (And what else is there, really?) The story makes sense only in a half-awake way: "Boarding Gate" is a fever dream, not an exercise in airtight construction. It unnerves by design -- we don't even get the usual creature comforts of being able to figure out, exactly, who's doing what and why.

But I don't think Assayas' sole intent is to confound us: He has loaded too much jagged poetry into "Boarding Gate" for it to be just an exercise in hip obtuseness. In the movie's opening scene, Sandra shows up at Miles' office to make their tentative breakup final. She seems to be obsessed with him, although there are other people around her who may exert an even stronger pull, among them Sue (Kelly Lin, the Hong Kong actress who has starred in several Johnny To movies, including the upcoming, and marvelous, "Sparrow") and Lester (Carl Ng), her bosses at the factory where she works.

The movie opens in an unspecified cosmopolitan city -- part London, part Paris, part Nowhere -- and comes to a close in Hong Kong. How do you get from Nowhere to Hong Kong? That sense of moving from here to there -- when you're not sure what you're leaving behind, or what's waiting for you at your destination -- is what gives "Boarding Gate" its weird, unsettling pulse. The movie was shot quickly and cheaply (Assayas has said he was going for a B-movie vibe), and it seems to leave plenty of dots unconnected on purpose. In Miles, Assayas gives us a fairly obvious villain: Madsen plays him as puffy and dissolute. He's deeply in debt, and he has been playing some kind of manipulative sex game with Sandra that amounts to having pimped her out. But in his business dealings, we don't know exactly what wrongs he has committed, if any; Assayas (who also wrote the script) seems to have left those details purposely oblique. If Assayas' 2003 "Demonlover" was a headlong descent into a hell of corporate corruption and sexual violence (though I admire the picture, watching it made me feel physically ill), "Boarding Gate" is more about the hazy, uncertain face of evil -- and the will, personified by Argento's restless femme-fatale heroine, Sandra, to escape and transcend it, although she can't do it without sullying her own soul.

There's no fast cutting in "Boarding Gate," no aggressively shaky camera movement. Shot by Yorick Le Saux, the picture throws off a shadowy, mistrustful glow -- it's the opposite of slick looking. The movie's images have their roots in traditional noir, but they're shaken up, roughed up: In a pivotal scene, Sandra struts into a luxury apartment, a lanky dame in sky-high platforms; this is a woman with a certain kind of earthy class, but no pedigree. By the time she leaves that apartment, she has done something she's not proud of -- stripped down to her very unmentionables, no less -- and her own ruthlessness shocks her. Her legs fold beneath her, as if she were a doe shot in the forest; her ankles seem to crumple as she falls off her cartoonishly tall shoes. She picks herself up, but it costs her something. She's invincible and in need of tenderness, too.

Assayas always seems to want a strong female presence in his movies: His best pictures -- "Clean," a story of transformation and reconnection, and "Irma Vep," a love letter to our collective obsession with movie images -- have starred the extraordinary Hong Kong actress Maggie Cheung, to whom he was married for a time. Perhaps it was inevitable that Assayas would eventually come 'round to Asia Argento -- daughter of Italian horror master Dario and a filmmaker herself -- who's like no one else in the movies today. Argento is fearless and often downright strange. Whether she's outrunning entrails-eating demons in her father's movies (like his latest wackbird enterprise, "The Mother of Tears," which is slated for a limited U.S. release this June) or playing a Russian villain's sultry moll in "XXX," Argento always gives us something to watch, and maybe even something to fear. I've never seen her in a movie where I haven't been at least a little bit scared of her: She has a way of glowering for the camera, as if commanding it to do her bidding rather than giving in to it.

But there's also something about her -- perhaps it's those winsome front teeth, pitched almost at a right angle to each other -- that seems crushable, if not breakable. In "Boarding Gate," her Sandra, so fierce and so fragile, is a global misfit, a citizen of the world who can't quite find her place. And yet, somehow, she makes the idea of being in transit feel like home.