John McCain's gaffe about an Iran-al-Qaida connection revealed how he and his hard-line allies are itching to target the mullahs next. 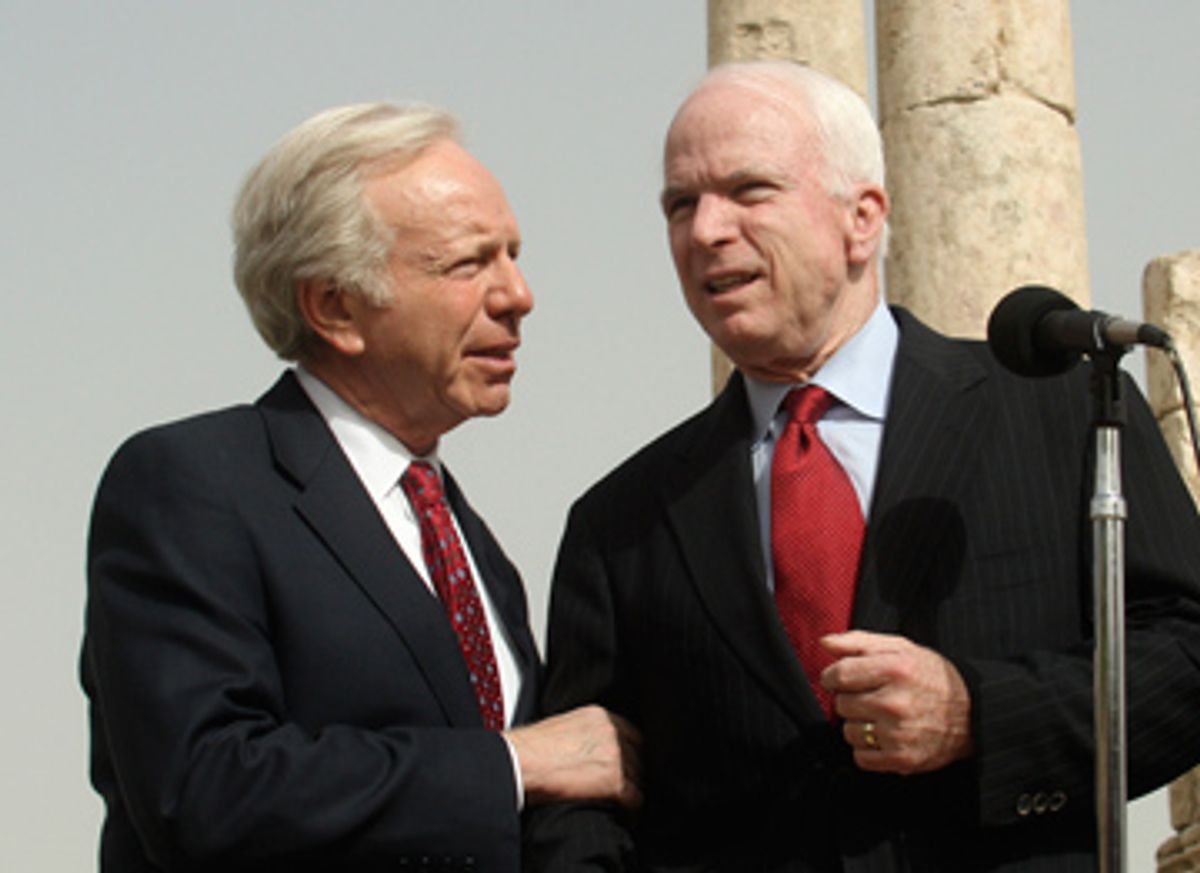 When John McCain, speaking at a press conference in Amman, Jordan, on Tuesday, accused Iran of harboring and training al-Qaida terrorists, he apologized as soon as Joe Lieberman loudly whispered in his ear that he had uttered a blooper. He withdrew that remark and noted that while the Iranian government is training other "Islamic extremists" across the border, that does not mean they are involved with al-Qaida in Iraq.

Being McCain, he did not have to worry about the cable networks playing the videotape of his mistaken comments on an endless loop. Confused as he may be, his friends in the national press corps are not about to expose him to ridicule. But now his own campaign seems to be withdrawing his self-correction and apology, at least in part -- and insisting that the Iranians indeed do maintain connections with al-Qaida in Iraq.

Given McCain's dangerous preference for force over diplomacy, especially in the Mideast, this is not a minor matter. (He wasn't really kidding when he sang "Bomb bomb bomb, bomb bomb Iran ...") By suggesting that the Iranians are aiding al-Qaida, the Arizona senator and his neoconservative allies are building a case for strikes against Tehran and perhaps even "regime change," just as similar allegations, since proved false, were deployed to justify the invasion of Iraq.

The curious retraction of the senator's correction occurred on Thursday, when Randy Scheunemann, McCain's national security spokesman, made the following statement to the New York Sun: "There is ample documentation that Iran has provided many different forms of support to Sunni extremists, including Al Qaeda as well as Shi'ia extremists in Iraq. It would require a willing suspension of disbelief to deny Iran supports Al Qaeda in Iraq."

To evaluate Scheunemann's assertion, it is helpful to know that he was also a spokesman for the Committee to Liberate Iraq, the neoconservative outfit that promoted the overthrow of Saddam Hussein for years before it got its way in 2003 -- and that the committee, like most of the war's enthusiasts, insisted on the connection between al-Qaida and Baghdad. Before its claims about that relationship were debunked, along with the mythical weapons of mass destruction, the neoconservatives and the Bush administration convinced a majority of Americans that Saddam was actually responsible for 9/11.

The purveyors of war on the right have been sounding the same themes ever since 9/11. As long ago as 2002, writing for National Review, right-wing commentator Michael Ledeen evidently couldn't decide whether Iran or Iraq ought to be blamed for al-Qaida's terrorism, and seemed to suggest that the decade of ferocious, bloody war between those countries had merely been a ruse to deceive the West. The Weekly Standard and other neocon organs have been grasping at every scrap of evidence, no matter how poorly sourced, to indict Iran for the terrorism of al-Qaida in Iraq -- and continued to do so this week by urging McCain to stand by his "gaffe."

As always, the reality is more complex and vexing than the simple schematic conceived by our right-wing ideologues. Dumbing things down got them (and us) into a lot of trouble in Iraq, but that hasn't chastened them at all. And of course they forget every fact that doesn't fit their precooked briefing.

Our intelligence on Iran is inadequate, but as far as our agencies have been able to determine, there is no operational relationship between Shiite Iran and the Sunni extremists of al-Qaida. Recall that in September 2001, the Iranian regime, then headed by a reformist president, denounced the 9/11 attacks and proceeded to assist in the U.S. overthrow of the Taliban in Afghanistan. Indeed, the Iranians had been fighting the Taliban through the proxy Northern Alliance army for years before the United States chose sides.

Questions later arose about whether the Iranians -- more specifically, the Revolutionary Guard -- helped al-Qaida figures escape American forces in Afghanistan. The 9/11 Commission report gave credence to some of those allegations. Over the years, reports from Tehran have indicated the presence there of several al-Qaida leaders, including Saad bin Laden, a son of Osama -- but many of those same reports suggested that Saad and his comrades were prisoners, not guests, of the mullahs.

For a politician like McCain, looking for an excuse to strike Iran, the temptation to see or even imagine a connection between al-Qaida and Iran must be powerful. It is not at all certain that he or President Bush had a clear understanding of the schism between the Shiites and the Sunnis before the war began -- or that they understand how much our occupation of Iraq has empowered the extremists in both Islamic factions.

It is difficult to believe that the Shiite leaders in Iran would arm and train the fanatical followers of the late Abu Musab al-Zarqawi, perpetrator of the bombing of one of their holiest places, the Golden Dome mosque in Samarra, not to mention countless murders of Shiite Iraqis. The Iranian leaders are devious and perhaps even demonic, but they are not likely to countenance the massacre of their own people and the defiling of their faith's sacred sites. Our misguided policies have ensured that they have plenty of militia and political power in Iraq without providing arms or training to their most implacable Sunni enemies.

The danger of a McCain presidency is not only that he would prolong our presence in Iraq but that he would seek to fulfill neoconservative dreams of a war expanded from Iraq into Iran and Syria, leading to a regional conflagration. With his campaign already sowing the arguments for a wider conflict, we will not be able to say we weren't warned.