The sites do not infringe on the retailer's trademarks, but taste is another matter entirely. 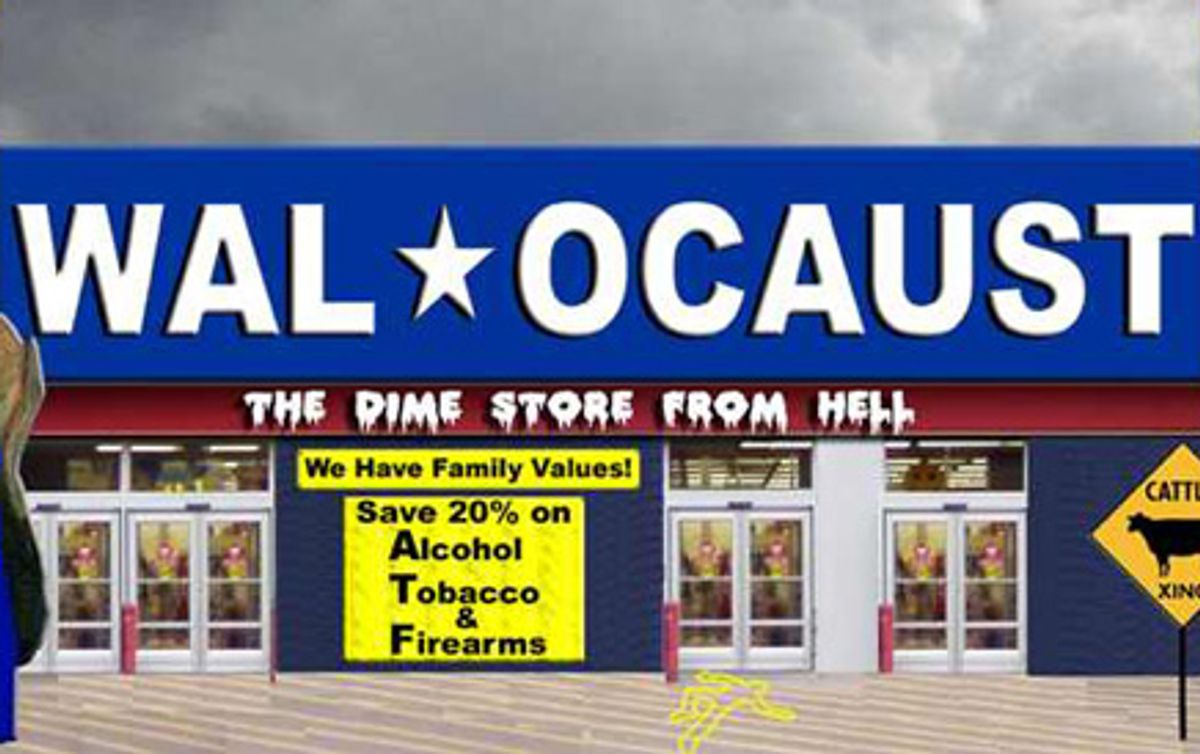 To put it mildly, Charles Smith, a 50-year-old computer store owner in Conyers, Ga., isn't a fan of Wal-Mart. Indeed he considers the retailing giant to be plying the same moral trade as Adolph Hitler and Osama Bin Laden -- and to prove his seriousness, Smith has gone and done something that requires a good deal of courage. He's designed a few impolite bumper stickers and T-shirts.

Smith's two Web sites, Wal-Qaeda and Walocaust, take for granted your hatred of Wal-Mart, and consequently offer little reasoned criticism of the firm. Instead, here you'll find an entire worldview squeezed into a slogan like, "Support our Troops: Boycott Wal-Qaeda."

One has to do some hefty mental work to conceive of a way that any of this stuff could pose an economic threat to Wal-Mart. But incredibly, Wal-Mart felt threatened by Smith's work, and a couple years ago it filed a trademark infringement suit.

Hey Wal-Mart, do you understand the legal definition of "trademark infringement"? For Smith to be violating your mark, consumers would need to be confused by the similarity of his logo to yours. Do you think that's possible -- that someone seeing a Walocaust or Wal-Qaeda logo might reasonably conclude that it's an official Wal-Mart production? If so, you must have either a very low opinion of your customers, or of your brand. Not a good sign.

Fortunately a federal judge in Atlanta had sense enough to strike down the suit. "The fact that the real Wal-Mart name and marks are strong and recognizable makes it unlikely that a parody -- particularly one that calls to mind the genocide of millions of people, another that evokes the name of a notorious terrorist organization ... will be confused with Wal-Mart's real products," wrote U.S. District Judge Timothy C. Batten Sr.

As the AP points out, the judge also noted that very few people were even interested in Smith's charming work: He has only sold 62 T-shirts, 15 of them to Wal-Mart's law firms.

If Wal-Mart had left Smith alone, you can be sure the word Walocaust would just be a sick joke, not a national news story. Now, of course, I'm writing about it here, which makes it huge.

By the way, I bet you're interested in Smith's justification for appropriating Holocaust imagery for his anti-corporate tirade. On Walocaust.com, he writes, "I worry that by even implying that anything could compare to the horror of the Holocaust, the worst tragedy in history, I cheapen the term." But then Smith saw a report "on the TV about how many goods Wal-Mart was importing from China and how many jobs this cost America."

The word popped into his mind: "Walocaust!" He adds: "Poor taste is nothing compared to immorality."

Maybe not, but it sure can't help.