The man who murdered John

In this podcast and interview, Jared Leto talks about transforming himself into Mark David Chapman for the nightmarish "Chapter 27." 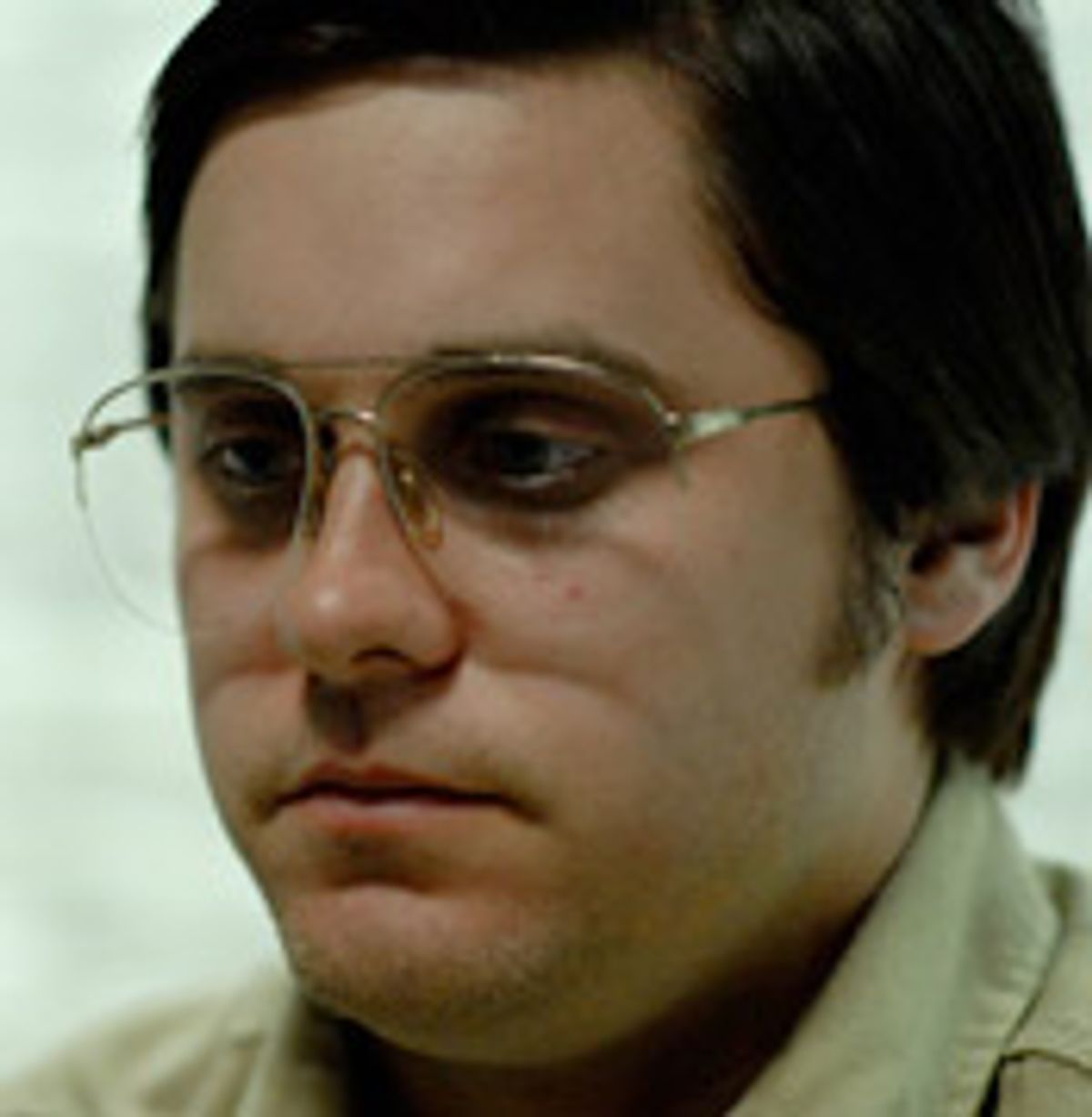 More than a year ago, at the 2007 Sundance Film Festival, I sat down with actor Jared Leto on the morning after "Chapter 27," the film in which he plays Mark David Chapman, had premiered to a decidedly mixed reception. (He told me I was the first person to interview him who had actually seen the film.) Leto may always be known to a certain demographic as Jordan Catalano from the cult TV series "My So-Called Life," but in the decade-plus since then he's become an interesting and wide-ranging character actor, appearing in such films as "Fight Club," "Girl, Interrupted," "Requiem for a Dream" and "Alexander."

He has nothing on his résumé that's quite like "Chapter 27," though; for better or worse, hardly anyone does. To play the bewildered drifter who shot and killed John Lennon outside Lennon's New York apartment building in December 1980, Leto put on more than 60 pounds, a decision that has caused the actor lingering health problems long after losing the weight. But the transformation is much more than physical. Leto also immersed himself in Chapman's demented worldview, studying interviews with the imprisoned assassin and committing to memory long snatches of J.D. Salinger's "Catcher in the Rye," the novel that obsessed Chapman. The title of writer-director J.P. Schaefer's film, in fact, is an oblique reference to Salinger's book, which has 26 chapters.

To a certain coterie of Lennon's fans, any mention of Chapman's name is forbidden, and I'm sure some are even now whispering that Leto's post-weight-gain afflictions are some form of karmic retribution. As I wrote when reviewing the film from Sundance, I can't see how acknowledging Chapman's humanity or exploring his painful struggle with madness -- which could so easily have ended differently -- diminishes Lennon in any way. Assigning some monstrous, nameless, Voldemort status to Chapman is giving him way too much power, and I feel pretty sure that if he ever sees this movie, he won't be too psyched about Leto's portrayal of him as a hulking, stammering, side-of-beef loser.

"Chapter 27" is virtually guaranteed to be one of those movies that's more talked about than seen, but it's an intense, claustrophobic experience, an inward voyage into a disordered mind. No context is provided about Lennon or the Beatles or Chapman's previous life. Schaefer focuses entirely on the three days Chapman spent in New York before the murder, tormented by the muttering cross-currents in his head (we hear them too) and on several occasions coming terribly, tantalizingly close to abandoning the whole thing and going home.

Chapman bumps into a few other people, briefly befriending a Lennon fan played by Lindsay Lohan, and sharing a friendly sidewalk exchange with Lennon himself (played by an English actor named, I swear to Jesus, Mark Chapman). But Leto's performance as this hunched, demented fanboy who made his own unpleasant mark on history has to carry the movie, in all its merciless and oddly sympathetic detail. To my taste it pretty much works, though I wouldn't blame anyone who simply wants to give it a pass. "Chapter 27," which is just being released in the U.S., isn't a great work of cinema or anything, but it possesses a feverish, B-movie nightmare quality that's finely attuned to its subject.

Listen to a podcast of this interview here.

Jared, was this subject -- John Lennon, and how he died -- something that interested you before you took this role on?

In a way it was. Many of us can't help but have the Beatles be part of the soundtrack of our lives. That was something I was aware of and invested in as a fan. So to visit some of the tragedy that surrounded it -- I was reluctant, but I think it was an important opportunity. It's the job of the artist, the writer, the performer, the whatever to explore the difficult, the politically incorrect in hopes that we discover something about ourselves. That was the ultimate motivating factor to dive into a film like this.

You know, there is some subset of John Lennon fans who have taken the position that paying any attention whatever to Mark Chapman is somehow demeaning Lennon's legacy. Did you have any hesitation because of that?

There was definite hesitation about the entire project. But I think ultimately there is more to gain from exploring something like this than there is to not exploring it, whether it's a film about Hitler or a film about an African dictator. There are films about horrible people all the time. Certainly this film -- I don't think it does anything to glorify Chapman or to reward him and I don't believe he should be rewarded or glorified. We were very careful. We tried to take every step necessary to have a process that was filled with as much dignity and respect as we could have. We were exploring three days of madness, of insanity, of human failure.

That's the key word, "insanity." My reading is you're not necessarily playing someone in this movie who is a profoundly evil person, like maybe Hitler or Idi Amin was, but somebody who is very sick, very damaged.

The film does ask us to feel some level of compassion for this person, even though he commits a terrible crime at the end of the story.

What was important to me was that he be allowed to live and breathe, to be a human being, not a cartoon. There's a danger in that, there's an element of denial in that. I think the reason to make this film, to explore and to learn and discover, is in the hope that there's a passage and a journey that takes place. We come out on the other side having acquired some sense of ourselves. Revenge doesn't pay off. I believe that it's a tragic, horrible failure of the human spirit. And Mark David Chapman is an example of the worst of humanity and John is an example of the best of humanity. To deny this story, I don't know how much there is to gain from that. I understand the protest and the dissent and the discomfort level. I completely understand that.

The one thing every entertainment magazine has dwelled on about this movie so far is the fact that you went through this tremendous physical transformation. Having seen the movie, I would say that it's more than a physical transformation. I've read that you put on 60 pounds for the role, it's been compared to De Niro's "Raging Bull" model of acting. Why did you feel that changing yourself that way was necessary to play this guy?

Well, I think that Mark's physical self really represents a lot about who he is. It was a lifetime of behavior. That transformation really only was one part of it, gaining that weight -- I'm 70 pounds lighter right now.

Yeah, you don't look anything like that guy right now.

You've also created a powerful psychological portrayal of this guy. I'm curious how much you went back to the source material here, like Chapman's interviews that were the basis of the book ["Let Me Take You Down"], or to "The Catcher in the Rye" itself.

All of it. It was a religious approach that I took to making the film and to diving into the transformation. I followed his entire life as much as I could. I started with his birth and went until Dec. 8, 1980. Anything else, I wasn't interested in, I didn't pursue and I didn't investigate. I followed his life as much as possible. It was a very research-heavy project for me and I learned a lot and basically tried to know and discover another human being inside and out in a very intimate way. I found a human being and I know that people don't want to hear that, probably. A very sick human being. A person with major, major problems in his life. There were a lot of strange and interesting parts of the preparatory process.

How close do you feel you came to understanding what his obsession with Holden Caulfield was all about, and what the Salinger book meant to him?

For him, his experience with "Catcher in the Rye" was very religious. The way he described his relationship with "Catcher in the Rye" -- you read the transcripts and you read what he says are his feelings about this book, and it's rare that you hear a human being talk at that level about what they feel is their connection to something. "The paragraphs and sentences of the book are entering my blood and flowing through my brain, becoming my ..." He was just locked in, he really was. There's a genius in that book, there's something happening there, obviously. That book has connected with so many people in a wonderful way. It's tragic that it's connected in such a negative way, the few times it has. But I got to know the book, I studied it like a Bible. It became my life blood. It [the assassination] was a very mysterious event that's filled with a lot of coincidence and mythology. The whole thing was so methodical, and he approached it in a distinct and very disturbed way.

One of the things that's so upsetting to a viewer, or to me anyway, was the fact that there seemed to be a number of junctures where it could have worked out differently.

It is heartbreaking. There is a scene that is in the film, where Chapman meets John Lennon, who is quite gracious to him.

He was a nice man.

Lennon signs his copy of "Double Fantasy" and sort of opens the door. "Is that all you want?" It seems like he would have stopped to talk, spent some time with Chapman, if Chapman had asked. At that moment, Chapman really considers getting back on the bus or the plane and going home.

Yes, yes. There was a push and pull, and Chapman said it himself. He was conflicted, and that doesn't make him any less of a sick individual. But there were opportunities, there were chances. It makes you really examine the idea of fate, and it was a very sad film to make. I was haunted for sure. We shot in front of the Dakota and it was heartbreaking to shoot there. I don't think anyone felt good about being there. I not only got to know Mark, but I extended my love for John in the process.

Mark was a huge fan, and he thought that by killing John Lennon he would become something or someone. That he would be worth more as a human being. Ultimately it's a film about what it is to be human, what it is to fail. I think that's something we all need to look at because collectively, we are very sick. We let things happen as a collective consciousness all the time that are very, very disturbing. Looking at the individual, I think the individual is part of the process. Sorry, you got me babbling. That's a first.

No, that's great. I was going to ask you about what you just said. You're a professional actor, and you've worked in lots of contexts. But I can't imagine that standing on 72nd Street outside the Dakota playing Mark Chapman was not an emotional and difficult experience.

Very haunting, very haunting. It was very upsetting. There was never, for me, a moment of joy in the entire process of making the film.

"Chapter 27" opens March 28 in New York and April 4 in Los Angeles, with many more cities to follow on April 11.