Ryan Phillippe plays a soldier called back to Iraq after he's completed his term of duty. How can we not care? 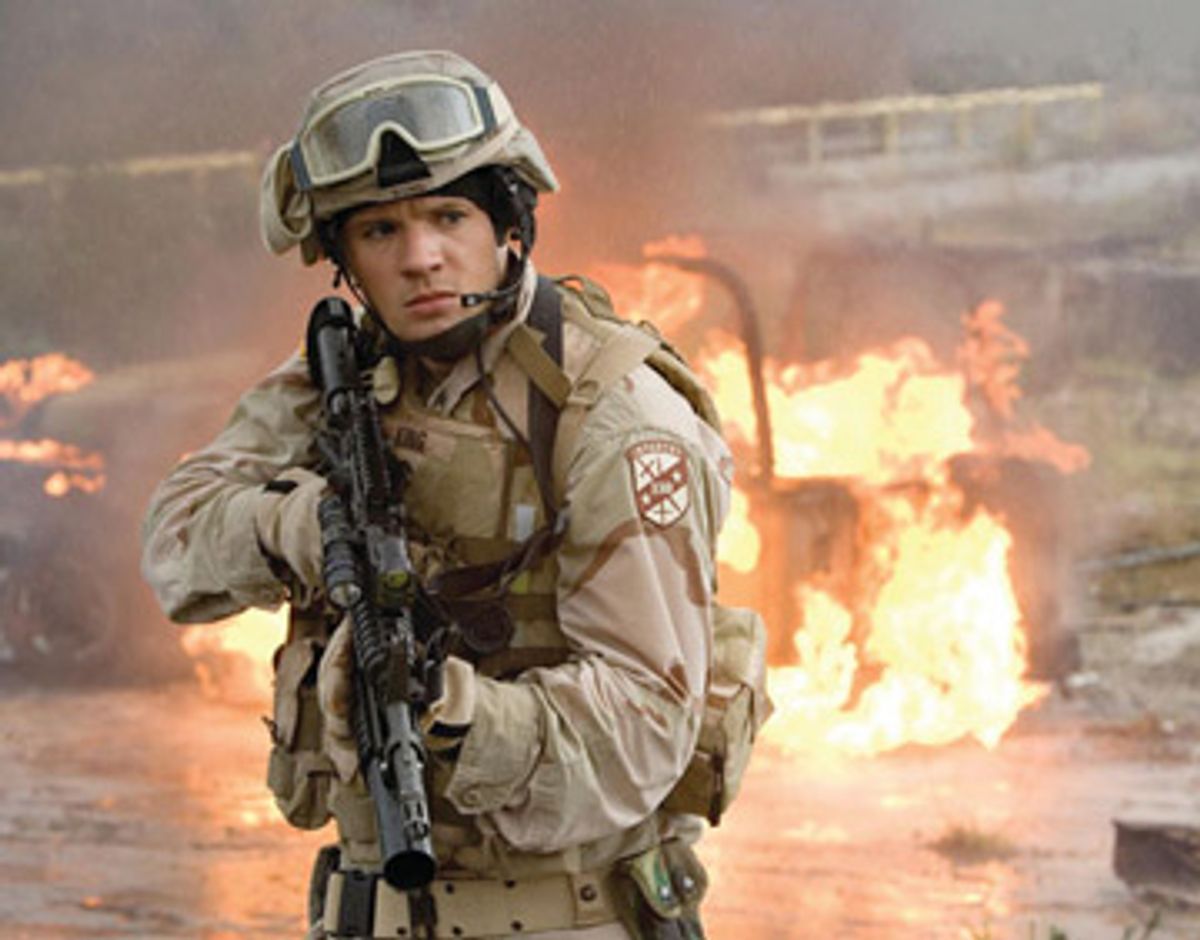 Like so many movies these days, Kimberly Peirce's "Stop-Loss" suffers from excessive competence: This is a picture that takes a serious subject everyone in America should care about -- the fact that the U.S. government has no qualms about using up and then discarding the soldiers deployed in Afghanistan and Iraq over the past seven years -- and turns it into drama so aggressively mediocre that you're forced to guilt yourself into caring about the characters in front of you. Watching "Stop-Loss," I kept asking myself, How could I not care about Ryan Phillippe, as a trusting, dutiful soldier who's been called back to Iraq even after he's fulfilled his required term? And if you have to ask yourself how it's possible not to care, there's something wrong. This is a movie about pain and suffering (both the emotional and physical kinds) that never lets its own guard down for a minute. Peirce wants us to comprehend the depths of these characters' wounds and scars. But it's not possible to do so without drawing blood.

This is Peirce's first movie since her 1999 debut "Boys Don't Cry," and no one should envy a filmmaker who's stepping out with her second movie after having made such a splash the first time, especially when the span of time between pictures is almost nine years. It's clear that the movie also has a great deal of personal significance for Peirce: Her own brother has served in Iraq. But a filmmaker's personal connection to the material doesn't necessarily mean that the resulting picture will be any good, and "Stop-Loss" is so dramatically tedious that it feels remote instead of resonant.

The term "stop-loss" refers to a government policy that allows soldiers to be called back to service even after they've completed their military contracts. Peirce, who co-wrote the script with Mark Richard, has tried to fashion an ensemble drama around the presumption that the U.S. government owns the very lives of its soldiers. Phillippe plays Sgt. Brandon King, a Texas kid who's seen -- and, we learn, done -- some terrible things in Iraq. He's ready to return to his hometown, to see his family (mom and dad are played by Ciarán Hinds and Linda Emond) and to spend time with his old friends, several of whom, Steve (Channing Tatum), his best friend from childhood, and Tommy (Joseph Gordon-Levitt), served in Iraq alongside him. Brandon is also close with Michele (Abbie Cornish), whom he's known since the third grade. She's engaged to Steve, and Brandon is the first person she calls when a drunken homecoming party for the soldiers turns violent.

None of these men reacclimate easily. In Iraq, an incident involving Steve was the impetus for a decision Brandon made, in a split-second, that will haunt him for the rest of his life. Brandon also lost several of his men, and at least one -- Rico Rodriguez (Victor Rasuk), who's also from Brandon's hometown -- was very seriously wounded. Brandon is ready to leave it all behind, as much as he possibly can, until he's informed that he's been called back for another term of duty. His only options are to fight it or run.

Loyalty to one's country, and the feeling of having been betrayed by it; friendships between men, and the ways in which they support one another through rough times; the way small towns can be nice places to live but not necessarily safe places to live (a notion that Peirce explored in "Boys Don't Cry" as well): "Stop-Loss" tries to be about so many things that it addresses none of them adequately. The early part of the picture is something of a scrapbook collage, incorporating home-video footage shot by the soldiers in Iraq as they try to amuse themselves in the face of tedium. The technique is similar to the one Brian De Palma used in "Redacted," and the horrific event that Brandon and his men experience (as well as instigate) is in some ways similar to the real-life events De Palma dramatized in his movie. But unlike "Redacted" -- a picture whose very rawness collapses the distance between the subject and the viewer -- "Stop-Loss" is reassuringly movielike. Peirce is willing to show us horror, but from a safe distance, too many steps removed; her movie is too dignified, too manicured, to feel immediate or even significant.

Individual scenes in "Stop-Loss" are badly shaped and filmed, even though the acting in them is sometimes so good that it manages to break through their uneven surfaces. With those penetrating, sorrowful eyes, that stubbornly childlike lower lip, Phillippe was born to play dedicated, principled soldiers, as he did in Clint Eastwood's "Flags of Our Fathers." He's good at these roles -- maybe too good. He paddles through "Stop-Loss" doggedly, as if he felt a personal responsibility to make the whole thing work. In one scene, he stops at a military hospital to pay a visit to his friend Rico. Rico has lost part of his right arm and a portion of one of his legs; his face has been badly burned, and he's gone blind: His eyes have the blank opacity of milk glass. This is the first time Brandon has seen him in his current state.

Brandon and Rico joke around to alleviate their awkwardness, and before he leaves, Brandon helps Rico affix the artificial arm that he's going to have to learn to live with.

The moment is -- or should be -- reminiscent of William Wyler's 1946 "The Best Years of Our Lives," in which the character played by Harold Russell (who lost both of his hands in a training incident during World War II) is helped into bed, methodically and without any visible emotion, by his father (played by Walter Baldwin). But this moment in "Stop-Loss" is neither dramatically casual nor casually dramatic -- it's simply nothing, even though, elsewhere, Peirce leans in too heavily, in close-up, on Rico's war-ravaged face.

It says something that Rasuk, the young actor who starred in the beautifully ragged-edged coming-of-age story "Raising Victor Vargas" a few years back, is still terrific in the scene, particularly when we're simply allowed to watch what he's doing instead of having so much attention focused on the pathos of his situation. Scene by scene, "Stop-Loss" is a study in missed opportunities. Maybe filmmakers -- even ones like Peirce, who bide their time and make only films they really believe in -- think they need to be obvious these days, that audiences won't be able to grasp ideas that are challenging or seemingly contradictory. But sometimes part of what makes us respond to art -- the artistry of movies included -- is the sense of being pulled in two directions at once. "Stop-Loss" doesn't allow us that freedom, or that luxury. Peirce makes her points, all right. She just doesn't trust us to get them.