The three reasons the Iraqi prime minister launched his ill-fated assault on the Sadrists of southern Iraq. 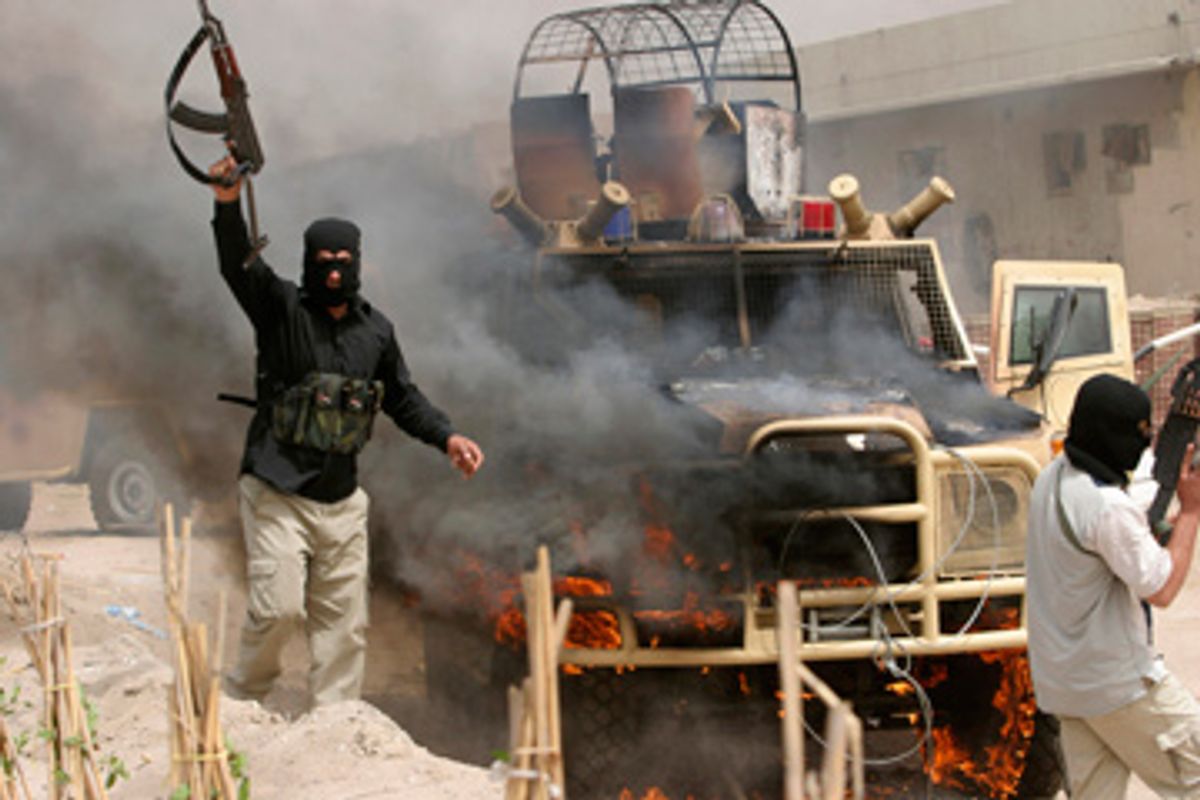 Despite the cease-fire called Sunday by Shiite leader Sayyid Muqtada al-Sadr, leader of the millions-strong Sadr Movement, last week's battles between the Mahdi army and the Iraqi army revealed the continued weakness and instability of al-Maliki's government. Al-Maliki went to Basra on Monday, March 24, to oversee the attack on city neighborhoods loyal to al-Sadr. By Friday, the Iraqi minister of defense, Abdul Qadir Jasim, had to admit in a news conference in Basra that the Mahdi army had caught Iraqi security forces off guard. Most Sadrist neighborhoods fought off the government troops with rocket-propelled grenades and mortar fire. At the same time, the Mahdi army asserted itself in several important cities in the Shiite south, as well as in parts of Baghdad, raising questions of how much of the country the government really controls. Only on Sunday, after the U.S. Air Force bombed some key Mahdi army positions, was the Iraqi army able to move into one of the Sadrist districts of Basra.

By the time the cease-fire was called, al-Maliki had been bloodied after days of ineffective fighting and welcomed a way back from the precipice. Both Iran, which brokered the agreement, and al-Sadr, whose forces acquitted themselves well against the government, were strengthened. As of press time Tuesday morning in Iraq, the truce was holding in Basra, and a curfew had been lifted in Baghdad, though sporadic fighting continued in the capital. Estimates of casualties for the week were 350.

The campaign was a predictable fiasco, another in a long line of strategic failures for the sickly and divided Iraqi government, which survives largely because it is propped up by the United States. So why did al-Maliki do it? With no obvious immediate crisis in Basra that called for such desperate measures, what could have motivated the decision to attack?

Three main motivations present themselves: control of petroleum smuggling, staying in power (including keeping U.S. troops around to ensure it), and the achievement of a Shiite super-province in the south. A southern super-province would spell a soft partition of the country, benefiting Shiites in the long term while cutting Sunnis out of substantial oil revenues, both licit and illicit. But all of the motivations have to do with something President Bush established as a benchmark in January 2007: upcoming provincial elections.

The Sadr Movement leaders themselves are convinced that the recent setting of a date for provincial elections, on Oct. 1, 2008, and al-Maliki's desire to improve the government's position in advance of the elections, precipitated the prime minister's attack. It is widely thought that the Sadrists might sweep to power in the provinces in free and fair elections, since the electorate is deeply dissatisfied with the performance of the major incumbent party in the southern provinces, the Islamic Supreme Council of Abdul Aziz al-Hakim.

Provincial elections could radically change the political landscape in Iraq. Both the Sunni Arabs and the Sadr Movement sat out the last round, in late January 2005. Thus, governments in the Sunni Arab areas are unrepresentative and in one case a Sunni-majority province, Diyala, is actually ruled by the Shiite Islamic Supreme Council of Iraq (ISCI), which Sunnis tend to see as a puppet of Iran.

Likewise in the Shiite south, the ISCI, led by Shiite cleric Abdul Aziz al-Hakim, is largely in power, even though probably a majority of the population favors Sadr. To have a minority in power and the majority feeling disenfranchised is especially dangerous in a violent society such as Iraq. The disjuncture has contributed to endemic fighting in the capital of Qadisiya Province, Diwaniya, for instance, between Sadr's Mahdi army and the paramilitary of the Islamic Supreme Council, or Badr Corps. In many provinces, ISCI has infiltrated members of its Badr paramilitary into the police and security forces, thus giving them the presumption of legitimacy and allowing the branding of the Mahdi army as violent militiamen with no popular mandate, won at the polls.

That the week's fighting was intended to bolster pro-government forces in preparation for the October provincial elections is at least plausible. During the fighting, the Iraqi army was allied with the Badr Corps paramilitary of the ISCI, which was trained by the Iranian Revolutionary Guards. ISCI, the leading Shiite political party in parliament, is now al-Maliki's main backer in the government, along with his own smaller Da'wa (Islamic Call) Party. And U.S. military spokesman Maj. Gen. Kevin Bergner told a news conference on Wednesday that the Iraqi army's military operation, which U.S. forces aided, was aimed at improving "security" in the city ahead of provincial elections.

And then there is the super-province. On the same day that Bergner spoke, a Sadrist leader told the Times of Baghdad, "The objective of the operations in Basra is to impose a provincial confederacy on the south, which the Sadr Movement opposes." The reference to a provincial confederacy, confusingly called "federalism" in Iraq, is to the plan of ISCI leader Abdul Aziz al-Hakim to establish an eight-province regional government for the Shiite south. Were the Sadrists to win the southern provinces in October's provincial elections, they would halt any move toward such a confederacy, since they favor strong central government on the French model and view al-Hakim's plan for a Shiite super-province as the first stage in a soft partition of Iraq.

The issue of whether to create a Shiite super-province and risk a soft partition of Iraq is not the only source of conflict between the Sadrists and the Iraqi government. The Sadr Movement demands the setting of a timetable for the departure of U.S. troops, a demand supported by a majority of the members of parliament but which is not shared by most ministers in the Iraqi cabinet.

Indeed, the Sadr Movement, which helped bring al-Maliki to power in spring of 2006, broke with him precisely over his refusal to demand that the U.S. set a timetable for troop withdrawal from Iraq. The Sadrists also objected to al-Maliki's direct meetings with Bush, which they saw as a humiliating capitulation to colonialism. In summer of 2007, the Sadrists withdrew their ministers from al-Maliki's cabinet.

The Bush administration wants its current partners to stay in power in the Shiite areas, since ISCI and al-Maliki's Da'wa party support a continued U.S. military presence in Iraq. Washington would probably therefore have preferred that the provincial elections in the Shiite south be postponed. Yet the administration knows that there is little hope of mollifying the Sunni Arabs unless they have an opportunity to vote for their own provincial leadership. The very step that might help calm down the Sunni Arab provinces, however, may inflame tensions in the Shiite south, if the Sadrists toss ISCI out on its collective ear.

The upcoming provincial elections are a potential public relations nightmare for both the Iraqi government and its allies in the Bush administration. What if fighting breaks out in September between the Badr Corps and the Mahdi army? They are the paramilitaries of the two major parties that will be heatedly contesting the south. A campaign now might weaken the Mahdi army, suggesting to the electorate in the south that the Sadrists cannot protect them. Iraqi Shiites appear mainly to vote for parties that they hope can protect them and establish security.

Other issues, such as petroleum smuggling, are also bound up with the power struggle. The various political parties in Basra are using their paramilitaries to capture and smuggle Iraqi government gasoline and kerosene, worth billions, which allows them to build up big war chests for fighting the elections and doing charitable work in rundown neighborhoods. A decisive defeat of the Mahdi army in Basra now would possibly have deprived the Sadrists of the funding they need to win the October elections.

If the Sadr Movement rules most Shiite-majority provinces, including Baghdad, that will make it difficult for the U.S. military to remain in the country. It will stop any move toward a soft partition of the country of the sort endorsed by the U.S. Senate. It will ensure that the Sadr Movement can continue to siphon off billions in petroleum revenue through smuggling, strengthening it for the future.

The survival of the current Iraqi government, based on rivals to the Sadrists such as ISCI and the Da'wa Party of al-Maliki, hangs in the balance. Clearly, al-Maliki felt that the operation had to be launched, and may well have thought that it is better to do it now, so that it will not be fresh in the minds of the Iraqi or American electorate when they go to the polls in the fall. Now that al-Maliki's campaign has gone so badly, it raises the question of whether there will be a sympathy vote for al-Sadr in October. The Iraqis, a majority of whom say they want a short timetable for U.S. withdrawal, may well have an opportunity to elect provincial governments that, practically speaking, want the same thing, in October. If that happens, it is hard to see how the U.S. presence can last, since the U.S. needs bases in Shiite provinces like Baghdad so as to function.