"Clatterford," a British comedy from the "Absolutely Fabulous" team, brings you a new crew of hilarious nut cases to love. 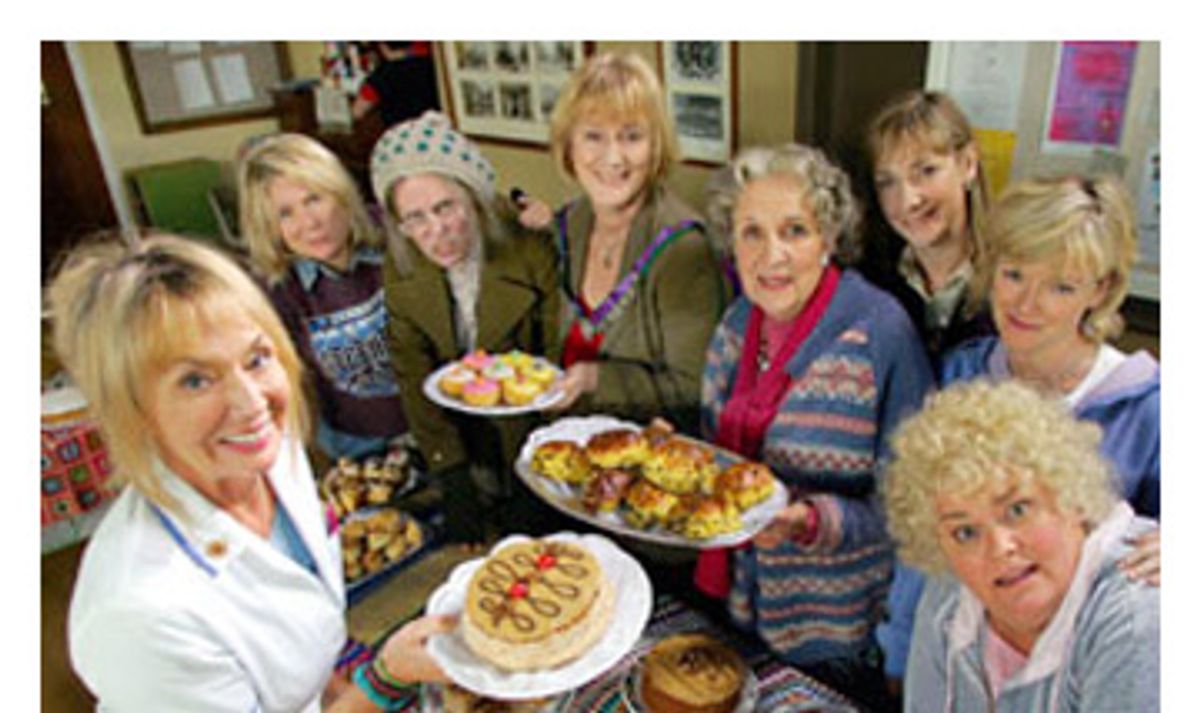 Do you relish the taste of a Cornish pasty? Do you have a thing for vicars? Do you long for picnic lunches on the moors? Do you like mad old birds on bikes with training wheels? Did you spend years mourning the passing of "Absolutely Fabulous," and have you ever briefly wished that that storied show about an excess of British femininity had included more scenes in which Patsy and Edina ride tractors?

If you answered "yes" to any of the above questions, please run -- do not walk -- to your local video establishment for the complete first season of "Clatterford," which began airing as "Jam & Jerusalem" in England in the fall of 2006 and concluded its first season run on BBC America in April 2007. The show was created by and stars Jennifer Saunders and Dawn French, the lauded British sketch comedy act, who happen to be the team behind "Ab Fab."

"Clatterford" centers on the Ladies Guild in Clatterford St. Mary, a rural village in England's West Country. The guild is, naturally enough, populated by the looniest bunch of ladies that Merrie Olde England has to offer. The nut case brigade is led by Rosie, played by French, a Clatterford resident with a knee-slapping case of multiple personality syndrome that results in slapstick fights with her alter ego, Margaret. Then there's Delilah, the ancient church organist with false teeth, played by an unrecognizable Joanna Lumley (that's "Ab Fab's" Patsy, to most of you).

The heroine of "Clatterford" is Sal (Sue Johnston), a nurse at the health center who has been a defiant Ladies Guild holdout until the death of her husband from a heart attack (from which she is unable to revive him, leading her best friend, Tip, to reassure her at the funeral: "He was already dead before you killed him.") In an effort to escape the cloying company of the local Grief Group representative, Sal finally gives in and joins the guild, inspiring rebellion in the tea-cozy-knitting, slide-show-watching ranks.

Clatterford's other standouts include Saunders' Caroline, the dry (as only Jennifer Saunders could make her) mother of a rock star, who livens up village gossip by talking about weekends spent with Madonna and Guy Ritchie: Fun, she claims, "until Sting started playing the lute." Then there's Sal's stoner, circus-performer daughter, Tash, who lights the church wall hanging on fire while juggling at her father's funeral and attempts to ditch her preteen son with Sal so that she can travel the world and sleep in a yurt. Sal's uptight son gives his fluid-phobic wife, Yasmin, his mother's old job as local nurse.

It takes some time to warm up to "Clatterford," especially for those whose ear for Britishisms -- think, "Her mobility scooter was sideswiped by a lorry coming out of the Lamb & Flag" -- may be out of tune. It's also true that if you like your television characters glamorous, Clatterford is not the town for you. There is no attempt to pretty up anyone: The residents of Clatterford would not win a beauty contest in any village, or on any planet. But Saunders, French, Lumley, Johnston and their gang have so much affection for this motley group of women that it's hard to resist their good, and deeply sodden, humor.

Watching the six episodes from the first season back to back is no hardship; like much of British television, they flow together seamlessly, appearing to have been conceived and executed in one well-thought-out batch, unlike many American series, in which quality and continuity can jump erratically within even a single season.

Sitting down for several hours in Clatterford does present one particularly grating problem: The show's theme song, a folk version of the Kinks' "Village Green Preservation Society," sung by Kate Rusby, is a lovely touch but may never, ever leave your head.

If only real-life small towns were populated by this many wisecracking crazies we'd all decamp for the West Country immediately.