In memory of Gordon Ramsay

The host of "Hell's Kitchen" is a good chef, lost beneath his own shtick. 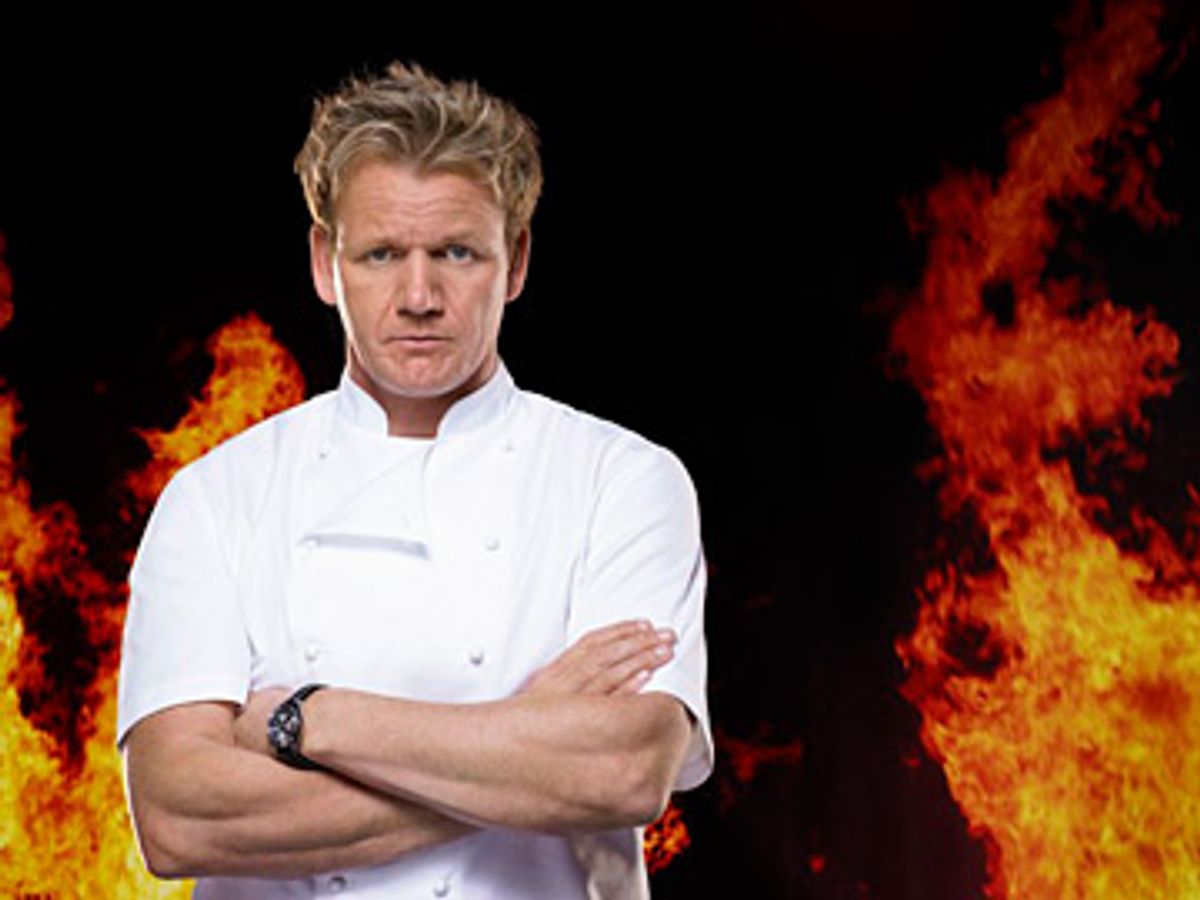 Let's make our purpose clear from the start: This is an elegy for the lost, under-lamented British chef Gordon Ramsay. A paean to the real Ramsay, the chef behind the facade. An ode to the Ramsay who isn't a total dick.

The new season of Fox's reality show "Hell's Kitchen," starring Ramsay, kicks off Tuesday night. It's a show that seems deliberately designed to waste Ramsay's considerable talents both as a chef and as a television personality by having him send inexperienced, talentless cooks through a particularly dull meat grinder. Ramsay and Fox give these poor saps simple kitchen tasks that are obviously way above their skill level, presumably in the hope they'll fail. And then, joy of joys, Ramsay gets to turn insincerely red-faced and yell. Last season, the producers brought on a particularly tragic character -- a fat, slightly dumb man who, nice as he seemed, was clearly not going to survive -- who didn't make it through the first episode before breaking down in tears. It was a good moment for no one. (That man would later be hospitalized, the second hospitalization in two seasons.) The victims -- er, contestants -- in "Hell's Kitchen" are just cannon fodder for Ramsay's temper tantrums, proof that American television sure does know how to destroy everything good and pure.

Yes, Gordon Ramsay: good and pure. Because the sad thing is that it never had to be this way. Ramsay -- the real Ramsay -- is no hack. His restaurants worldwide have earned him a combined 12 Michelin stars. (That may not sound like many, but three stars is the highest rating possible, and earning even one is an honor. Lucifer will be burning winged pigs on a bitter night before most of Food Network's chefs become capable of earning just one star.) Ramsay was a respected chef in Britain well before his introduction to American audiences. He trained under the infamous Marco Pierre White as well as the revered French chefs Guy Savoy and Joël Robuchon, and now has more than a dozen restaurants in his portfolio. There is no sugarcoating him: Ramsay was always, long before Fox twisted his personality beyond all recognition, an asshole. But his screaming used to serve a purpose. It used to be a small part of what he did in the kitchen -- at least, the parts we saw on television -- and it was done for a reason. For motivation, for teaching, for a good old-fashioned kick in the ass when one of his cooks needed it. On British television, that's mostly still how Ramsay operates. Ramsay is, when he wants to be, a wonderful teacher, someone who is capable of making even the most complicated of techniques instantly comprehensible, even to an inexperienced home cook. But that's just how the British get to experience him. Perhaps it's a symbol of how others see the States, and even the low esteem we have for ourselves: The intelligent, nuanced Ramsay goes to the British (who've managed to retain an air of sophistication even though so much of their humor is based on a theory that ugly men in dresses are never not funny), but the blowhard Ramsay gets fed to the stupid Americans -- we're given a caricature, a man almost purely evil, who's cruel just because he can be.

Here in the States, only BBC America shows us a glimpse of the other Ramsay. On "Ramsay's Kitchen Nightmares," the chef has a week to rescue a failing restaurant with hardly a prayer of survival. And if the businesses do make it, all credit goes to Ramsay, who shows occasional flashes of the familiar prick but is also warm, comforting and even helpful. Do not miss the episode in which Ramsay saves a restaurant dubbed Momma Cherri's Soul Food Shack. The owner and employees of the shack actually seem to like Ramsay, and with good reason -- with a little know-how, he turns a restaurant that's failing but good at heart into a thriving establishment. At one point, owner Charita Jones starts to cry when she realizes she won't lose her business thanks to Ramsay. I dare you to watch that scene and not tear up. (The episode airs next on April 17 at 6 p.m. EDT.)

By contrast, there's Fox's version of the show, "Kitchen Nightmares." Here, Ramsay pretends to turn poor slobs who couldn't run a child's lemonade stand into the next great restaurateurs -- all in that same week. It would be a whole lot more entertaining if the people being rescued were actually sympathetic and we could be convinced to root for the doomed restaurants. But then, that's not the point -- why learn something when you can settle for shock value and bargain-basement cheap drama?

Which only makes me long for more episodes of another Ramsay series BBC America carries, "The F Word." It's Ramsay's reinvention: Short clips of Ramsay behaving like a decent human being. We're introduced to his kids (they're adorable). He teaches Britons accustomed to reheating crap for their friends and loved ones how to cook. He raises animals -- turkeys, pigs, lambs -- in his backyard so his children will understand where their dinner comes from, and so he can serve the best possible food to his customers. He makes nice with celebrities. He brings ordinary people to work at one of his restaurants and doesn't treat them like filth. And he even manages to cook well, to remind us that there's a reason beyond the temper that the man was famous in the first place.

On YouTube, there's a video -- an excerpt from "The F Word" -- of Ramsay cooking a truly beautiful rib-eye steak. It's food porn at its obscene best. In close-up, we see a soft pat of butter melting on top of a perfectly seared steak that's been crowned with rosemary. Ramsay gently bastes the steak with even more melted butter from the pan in which the steak's cooking; the molten fat and beef juices run in sensual little rivulets down the steak. Then Ramsay takes out the steak, looks at us and says, "Just leaaave it to rest." Suddenly I'm as melted as the butter. (My writing a little too Penthouse Forum for you? Don't get me started on this video of Ramsay cooking breakfast. Sure, I'm straight, but then I wonder -- what would I be willing to do to have Gordon Ramsay serve me those scrambled eggs in bed one morning?) And yet, there's a hard pit of despair at the bottom of my stomach. Somewhere, I fear, American television executives are watching this same clip and thinking to themselves, "Well, he's good, but can he make a life-size replica of Eleanor Roosevelt out of an inedible cake? And would it kill him to say 'E.V.O.O.' a couple times an episode? Maybe I can sell this anyway, assuming he can pretend he's really, really angry and potentially violent..."

But Fox seems not to have bothered to check out Ramsay's British shows in order to see how entertaining he can be. The premiere of the latest season of "Hell's Kitchen" is unwatchable from early on, when a disembodied voice that would make Vincent Price turn over in his grave announces, "Only three have ever survived the trials of 'Hell's Kitchen.' Now, we are reawakening the beast. And the dark lord reigns again." And to think -- Ramsay acts as if it's his contestants' food that's gag-inducing.