The sun blotted out from the sky 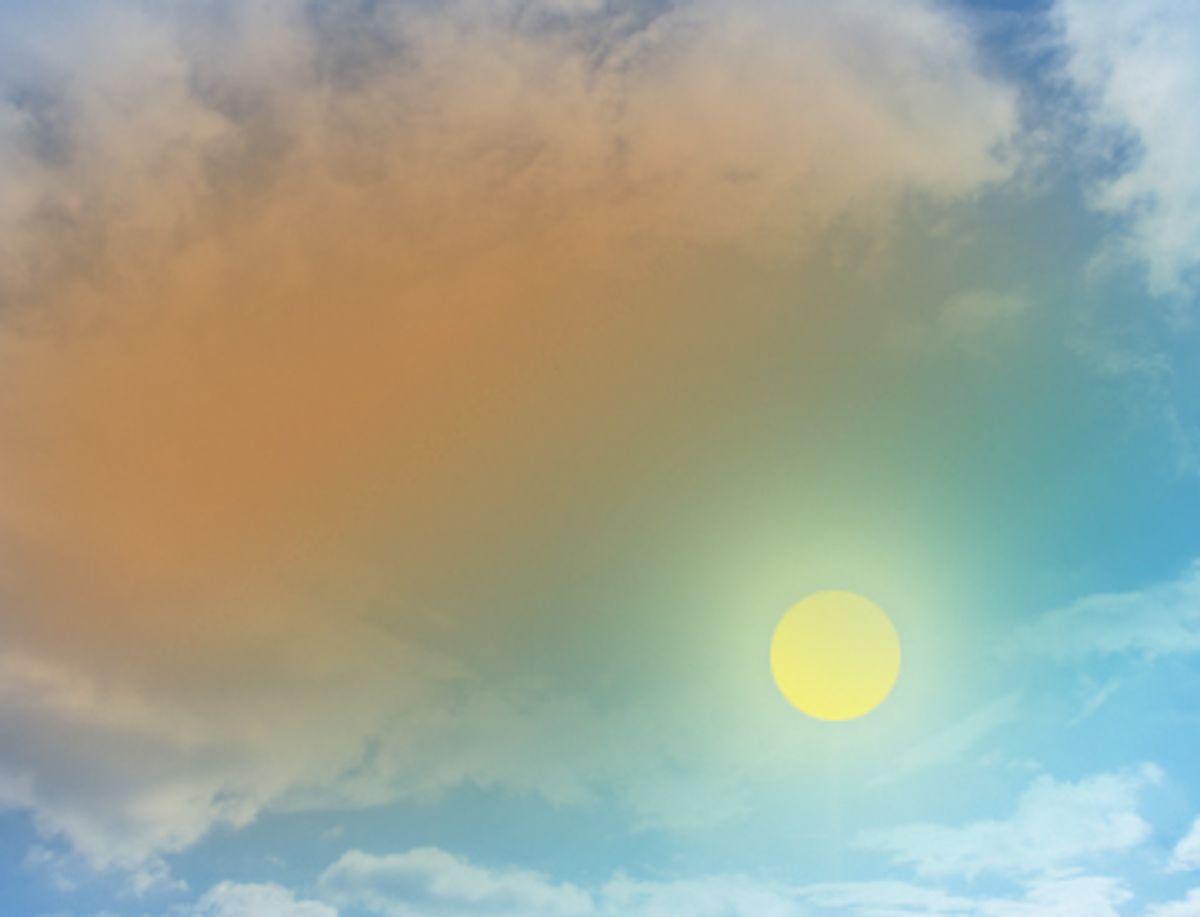 Gregory Benford thinks Al Gore's a good guy and all, but he also thinks the star of "An Inconvenient Truth" is a little delusional. Driving a hybrid car, switching your bulbs to compact fluorescents and springing for recycled paper products are all well-meaning strategies in the fight against global warming. But as UC-Irvine physicist Benford sees it, there's a catch. Those do-gooder actions are not going to be effective enough to turn the temperature tide, and even incremental political changes like reducing greenhouse gas emissions and mining alternative fuel sources are not forward-thinking enough. "I never believed we were going to be able to thwart global warming through carbon restriction," Benford says. "Carbon restriction requires nations to subvert short- and midterm goals for a long-term goal they've read about online, and that's just not going to work."

As an alternative, Benford has cooked up a plan that amounts to a manmade Mount Pinatubo eruption. He has proposed shooting trillions of tiny particles of earth into the stratosphere, where they will remain suspended to help blot out incoming solar rays. Dirt is cheap, chemically unreactive and easily crushable, he argues, making it a simple matter to test this strategy on a small scale over the Arctic before total global deployment. This plan might seem a little too sci-fi to take seriously -- fittingly, Benford moonlights as a Nebula-winning novelist -- but he's far from the only scientist to lobby for a so-called geoengineering fix.

Researchers all over the world have begun advocating large-scale climate control strategies that sound like something "The Simpsons'" Mr. Burns might endorse, including erecting sun-blocking mirrors in deep space, spraying tiny droplets of sulfur or ocean water into the atmosphere to deflect sunbeams, and seeding the oceans with iron to spur the growth of CO2-sucking phytoplankton. When a panel of scientists addressed the ethical implications of geoengineering at the annual American Association for the Advancement of Science conference in February in Boston, it was a clear sign of how far this seemingly out-there field has advanced toward legitimacy.

While no proposed geoengineering fixes have yet been tested on a global scale, all of them have the irresistible lure of immediacy. Once deposited, CO2 can linger in the atmosphere for more than 100 years, meaning it will take decades or centuries for emissions-reduction policies to cool the planet significantly. Geoengineering, on the other hand, could potentially send global temperatures back to preindustrial levels within only a few years, bringing the Arctic melt to a screeching halt and keeping extreme weather patterns and rising sea levels associated with warming in check. "Every simulation that's been done shows that geoengineering doesn't bring the climate back perfectly," says Ken Caldeira, an ecologist at Stanford University, "but you could put sulfur in the stratosphere right away and it would be colder next year."

Hubristic to the nth degree? Riskier than a tightrope ballet? Absolutely. Even geoengineering's proponents concede that. "The history of intervening in complex systems to correct them is not good," says Caldeira, who has cautiously endorsed future geoengineering research. "You always think you know how the system's going to respond, but we should assume that if we start doing this, there are going to be some ugly surprises."

While researchers can't predict the exact trajectory a geoengineering scheme spiraling out of control would take, the scenarios they've proposed so far are downright apocalyptic. "Aerosol clouds do block out the sun, but they could also produce regional climate change and reduce the Asian monsoon rains," says Alan Robock, an environmental scientist at Rutgers University. "That would threaten water and food supply for billions of people." Likewise, a poorly designed deep-space mirror could put swaths of the planet in shade, devastating crops. Further, spraying too much sulfur into the atmosphere could produce enough acid rain to decimate forests around the world. Multiply the effects of every past human-intervention horror show, from kudzu to Chernobyl to cane toads, by a thousand, and you begin to grasp the potential fallout of a geoengineering venture gone bad.

But advocates contend that climate engineering -- despite its Frankensteinian specter and attendant risks -- is far preferable to the alternative: launching a suite of well-intentioned emissions-control measures that go belly-up, allowing warming to proceed virtually unchecked. "I know of no realistic person who thinks carbon dioxide emissions are going to do anything but grow," says Pete Geddes, executive vice president of the Foundation for Research on Economics and the Environment. "Most European countries are not meeting their emissions goals, and of the ones that have, it's because their economies are collapsing. In the United States, this notion that we're going to reduce our emissions by 80 percent is pure fantasy."

To be sure, the degree of emissions control required to stave off warming's worst effects will require almost monastic global discipline. A Geophysical Research Letters paper published last year warned that if greenhouse gas emissions are not curtailed to at least 60 percent below current levels by 2050, the world will see warming of more than 2 degrees Celsius within the next century, enough to submerge low-lying coastal areas and drive polar bears and Atlantic salmon to the brink of extinction. By comparison, Kyoto Protocol targets -- which many countries are failing to hit -- require participating nations to reduce emissions to at least 5 percent below 1990 levels by 2012. That's better than nothing, says Boston University visiting law professor Jay Michaelson (who wrote a seminal geoengineering article for the Stanford Environmental Law Journal), but it still doesn't make enough of a dent in the problem. "Even with the most assertive emissions-reduction targets, we're not talking about a real reduction in CO2 levels, we're talking a reduction in the rate of growth," says Michaelson. "Either we have to question the nature of industrial society, or we have to consider other solutions."

Robock dismisses this as an overblown doomsday scenario; lowering temperatures through emissions limits alone, he says, is still more than feasible. "Every time a geoengineering proponent says reducing emissions is impossible, that reduces the will of society to solve the problem."

But purely scientific disagreements about geoengineering are just the tip of the melting iceberg. Questions of usefulness and necessity aside, grand-scale sun-blocking schemes feel dubious in part because they challenge our intuitive sense that large-scale wrongs can be atoned for only with equally large-scale sacrifices. Drastic emissions cutbacks require drastic lifestyle changes, like taking shorter showers and scrapping the Hummer. Such changes feel right because they're a little painful; putting the squeeze on ourselves is suitable penance for the collective sin of spewing tailpipe fumes into the atmosphere for the past 100-plus years.

Geoengineering, by contrast, seems like an undeserved dispensation, a free-lunch promise that technology can whitewash our past transgressions. Let's go on a fossil fuel binge, never mind the CO2 hangover; scientists will cure it by blotting out the light and fertilizing the oceans! "It's like giving alcohol to a drunk; you've got a knife in your drawer so you can put in a new liver if he ever needs it," said Dale Jamieson, director of environmental studies at New York University, at February's AAAS conference.

Still, even the most skeptical scientists concede that it makes sense to consider geoengineering as a last-ditch option, a kind of nuclear football that can be deployed if warming becomes too dire -- if Manhattan threatens to slip under the waves, say, or if the Fertile Crescent shows signs of turning into a barren wasteland. "We need to do more research to figure out whether geoengineering is possible in an emergency situation," Robock says.

Assuming for a moment the patient might need a new liver someday, who's going to perform the transplant? Existing international laws could complicate the procedure; a 1977 United Nations convention prohibits countries from using environmental modification techniques that could have "widespread, long-lasting or severe effects" on any other nation. That means that if a government-funded geoengineering scheme has the potential to disrupt global weather patterns, countries whose interests stand to be affected could legitimately shut it down. And that's leaving aside the thorny question of how to achieve climate-engineering consensus on a global scale. "Whose hand would be on the thermostat?" Robock says. "What if India wants it cooler and Russia wants it warmer?"

Which states emerge triumphant in squabbles like this may end up being a moot point. The 1977 U.N. convention, like so many drafted during that era, places no specific restrictions on the activities of private citizens. Since geoengineering measures tend to be much more affordable than emissions-reduction ones (dirt and sulfur aren't exactly hot commodities), a future Bill Gates or Richard Branson could theoretically kick off an artificial climate-cooling program with little or no input from the rest of the world. "The cost to spray particles over the Arctic would be a couple hundred million dollars a year; and for the whole planet, it's a few billion a year," Benford says. "That's the thing that terrifies geoengineering's opponents -- that this is at least a thousand times cheaper than anything else." Indeed, the strategy's very accessibility may be what makes it the most perilous. Who's to say some rogue entrepreneur, however well intentioned, won't plunk down part of his multibillion-dollar nest egg to send up a fleet of sulfur-spraying planes, putting the Northern Hemisphere under a perpetual cloud and touching off other climatic consequences yet to be foreseen?

Still, taking the giant -- and, in Benford's view, necessary -- global leap of committing to geoengineering fixes may require private-sector intervention, as no society today seems willing to put so much faith in a single technological solution. "Everybody talks about [geoengineering] as though it's a matter of mass action, but I don't think it is -- I don't think it can be," Benford says. "The reason nothing's being done is that governments are ever slower to act."

But putting our fate in the hands of a flash-in-the-pan environmental dabbler with money to burn is especially risky given that adopting a geoengineering venture would be like putting the planet on methadone. It might save us from hitting climatic rock bottom, but it would also require fastidious commitment to a treatment program with no real end in sight. Whether any entity, commercial or governmental, would be able to carry out the necessary upkeep for millenniums -- independent of regime changes, cultural shifts and shadowy future catastrophes -- is still an open question. "Only one or two organized bodies have been able to carry down their traditions for a thousand years," Benford says. "It's a challenge for our civilization. Future societies are going to have to place their trust in a technological enterprise as they never have before."

But all that's far enough in the future that it still feels reassuringly abstract. For now, geoengineering gurus like Benford are concentrating their efforts on the most immediate task at hand: securing funding to test their grandiose plans in the Arctic and other trial venues. It'll be an audition, a chance for these off-off-Broadway productions to prove that they deserve a place on the biggest stage of all -- and the results of the demo round could help determine what life on this planet will be like for the next thousand years. "Is geoengineering a pipe dream, or something that could actually save the future of mankind?" Michaelson says. "We need to figure out which one is true."