Hillary's bridge back to the 20th century

With recession looming, Clinton banks on '90s nostalgia, reminding Pennsylvania voters of the good old days of her husband's administration. 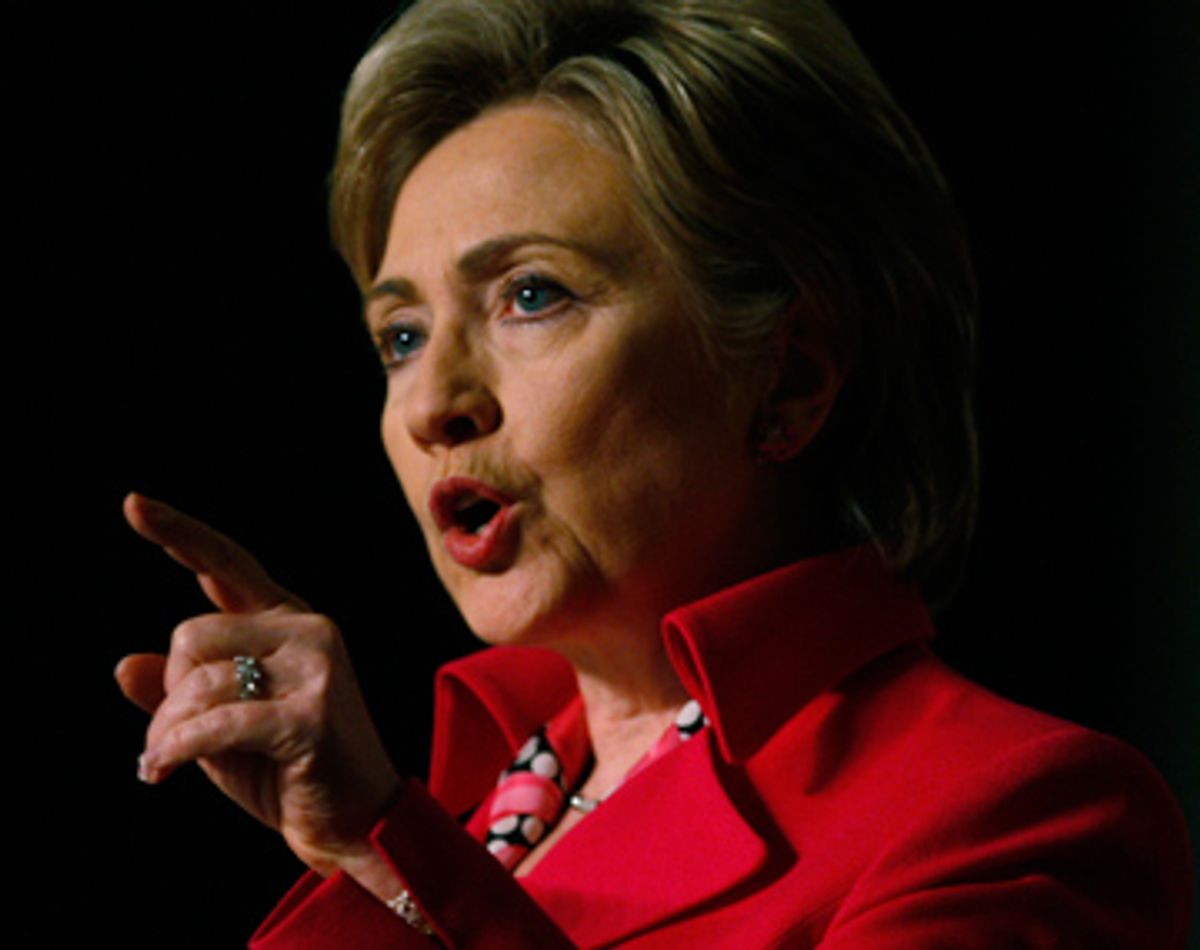 Hillary Clinton's supporters picked her official campaign theme song nine months ago, with Celine Dion's "You and I" beating out an eclectic field in an online contest (surely the only time the Temptations have competed directly with Smash Mouth for anything). As Clinton crisscrosses Pennsylvania to rally her base before this month's primary, though, you don't hear Celine much at her stops. For now, the new unofficial campaign song, taking a cue from Philly film history, is the theme from "Rocky." But the tune that Clinton and her supporters really seem to be humming lately is "Don't Stop Thinking About Tomorrow," the theme song from her husband's 1992 campaign.

"There's a lot of work to be done, and I'm prepared to do that work," Clinton told the Pennsylvania AFL-CIO convention here on Tuesday, in a speech that harked back to the good old days before her family left the White House. "I've apprenticed, and I've learned how to do it. I have watched it being done for eight years ... It took a Clinton to clean up after the first Bush, and it'll take a Clinton to clean up after the second Bush."

Facing yet another contest in a state she's declared to be a firewall against Barack Obama, Clinton is tapping into 1990s nostalgia everywhere she goes. (Especially this week, when Obama made an overt play for Clinton's base.) It is, once again, the economy, stupid; Hillary is practically offering to build a bridge back to the 20th century. The white working-class voters she's relying on to win say they miss the prosperity and peace of the Clinton years, and they figure she's the next best thing to getting Bill back. So in Pennsylvania Clinton is presenting herself as the safe choice, the comfortable choice, the familiar choice -- playing to a big bloc of blue-collar voters who don't like taking risks, didn't do so well the past eight years, and aren't interested in gambling that the new guy can fix things. Exit polling in other states has already shown that Clinton's voters are more worried about their own families' financial situation than Obama's voters are, and that her supporters think the economy is more important than other issues like the war in Iraq.

"Obama, I don't know," said David Bunda, 44, a letter carrier from Yardley, Pa., whose union is backing Clinton. "I've never heard of him until last year. Then all of a sudden everybody wants to vote for him. We need change, but not to him. I think we need Hillary." After one of her rallies at a wind-turbine factory in Fairless Hills, Pa., in a massive Bucks County industrial park just across the river from New Jersey, Bunda said he'd always liked the Clintons. "I liked Bill, yeah," he said. "Even though he lied, I still liked him because the economy was pretty good."

The Clintons have always had plenty of friends in Pennsylvania, though Hillary's recent focus on her childhood in the Scranton area didn't get quite as much play until her campaign came to depend on winning the state. Ed Rendell, whose success as Philadelphia's reform-oriented mayor in the 1990s became the model for some of Bill Clinton's national urban policy, and who went on to become chairman of the Democratic National Committee under Clinton, is now the state's popular two-term governor. He's practically taken the month off from his day job to help Hillary, bustling around in her motorcade and introducing her to all his fans. Rendell feeds the Clinton nostalgia, as well, reminding voters in the Philadelphia suburbs how well the city did during Bill's administration (and, ahem, Ed's).

But like all hazy, soft-focus memories of better times, Clinton's version of the '90s is a little airbrushed. The union crowds she's playing to didn't like NAFTA; here, as in Ohio, voters suddenly learn that she didn't, either. "Anybody who tries to hang it around her neck is hanging it on the wrong neck," Gerry McEntee, a Philadelphia native and the president of the American Federation of State, County and Municipal Employees, told the AFL-CIO convention, recalling a conversation "she may not even remember" in which Clinton called him to sympathize when her husband's administration finally lined up the votes to pass the trade deal. (Meanwhile, AFSCME probably had less to fear from NAFTA than any other union besides the NFL Players Association.) Clinton says she fought against NAFTA in internal meetings, but had to fall in line once Bill Clinton decided to push forward with it. But she told reporters after her speech here that was the only major economic policy matter where she disagreed with her husband's administration. She also acknowledged one reason she had opposed the trade deal was that she preferred to save political capital for her healthcare legislation.

For a lot of Clinton voters here, those details don't matter so much as the big picture she's painting them. It's a familiar one. She's aiming for people like Bunda, who want a change from George W. Bush, but would prefer a change back to something they've already tried. Clinton offers soothing policy prescriptions -- $100 billion in middle-class tax cuts, 5 million new industrial jobs keyed to "green" technology so they're allegedly outsourcing-proof. And she offers protectionist rhetoric to go along with it, attacking China for dumping steel on U.S. markets and shipping poisoned food to U.S. pets. (This is a little more airbrushing; the Clinton administration renewed China's preferred trading status every year when it came up for review.) Clinton wants to make it easier to borrow money for college, as it was in the good old days, and she wants to make it cheaper to buy gas, as it was in the good old days. Everything seems geared toward reminding supporters how well they used to have it.

And with her crowds, it works. Why try the other guy when you can just have the '90s again? "People don't understand a lot of the issues," said Marjorie Margolies, who lost her suburban Philly House seat in 1994 after she cast the deciding vote for Bill Clinton's first budget proposal. Now she's a supporter (and possibly future in-law) of Hillary Clinton and teaches a class on politics at the University of Pennsylvania's Fels Center of Government. "They really do vote on what makes them feel good, what's more believable, who has a more pleasing personality." For Clinton's supporters, the nostalgia helps do the trick.

"I couldn't trust Obama to lead the country, not with Iraq, Iran and all that bullshit we got," said Jerry Cullen, a crane operator from Fishtown, one of Philadelphia's working-class neighborhoods near the Delaware River, with demographics made for Clinton (white, older, Catholic). "She's a doer." For Cullen and his wife, Mary, healthcare and the economy are even bigger worries than foreign policy. "We have some serious issues, and it scares me that these young people aren't really looking at that," Mary Cullen said. "They're just seeing him as this young fresh face. He's got charisma, but I want more than that." Clinton's most dedicated supporters want someone who will fight for them, and they're not sure Obama will. "He ain't got the clout to do it, and he don't got the hours," Jerry Cullen said. "That woman got 30 hours in her day. Ain't nobody works 30 hours in a day but that kid."

Hence the "Rocky" music everywhere she goes. The Hillary-as-Rocky theme speaks directly to that sentiment. "When it comes to finishing the fight, Rocky and I have a lot in common," she told the labor convention. "I never quit. I never give up." But there is a downside to casting yourself as the blue-collar heroine who battles on against the odds. "Rocky" isn't just a classic tale of a scrappy underdog; it's also now considered the quintessential cinematic expression of the working-class white backlash against the civil rights upheavals of the '60s and '70s. In grasping a cherished local symbol, Clinton may not have thought through the complicated racial politics involved in the film, but they're mirrored, at some level, in the campaign. After hearing from both candidates at the AFL-CIO convention, some union members from northeastern Pennsylvania told me matter-of-factly that they have friends and neighbors who won't vote for Obama because he's black.

"I don't think people are racist. I just think they're scared," said Antoinette Yachta, a steelworker from Throop, Pa., near Scranton. She isn't sure who she'll vote for in the primary, though she's leaning toward Obama, and she might still vote for John McCain in November. (In 2004, she volunteered for John Kerry's campaign, then voted for Bush.) "They don't think it's time yet, for even a woman president, but if they had a choice, they'd pick her." It could be that part of what makes Clinton the comfortable, safe choice for some of her voters goes beyond the economy and into touchier areas.

That's not Clinton's fault, and her intense focus on the economy is clearly her main argument to her base here, not any kind of subconscious racial point. But in the end, that isn't even the biggest metaphorical problem that "Rocky" presents for Clinton. By the time McCain supporter Sylvester Stallone had finished making the fourth film in the "Rocky" series in 1985, the all-American working-class boxer had become a rich and famous success who defended U.S. pride against a Soviet automaton. Before Clinton puts too much stock in her analogy, though, she might want to go back and watch the end of the first movie -- where Rocky Balboa wins a moral victory and the love of the crowd but loses, on a decision, to a black opponent.