Unlike most presidential Dems in recent memory, the Illinois senator is at ease with himself -- even while bowling gutter balls in Pennsylvania. 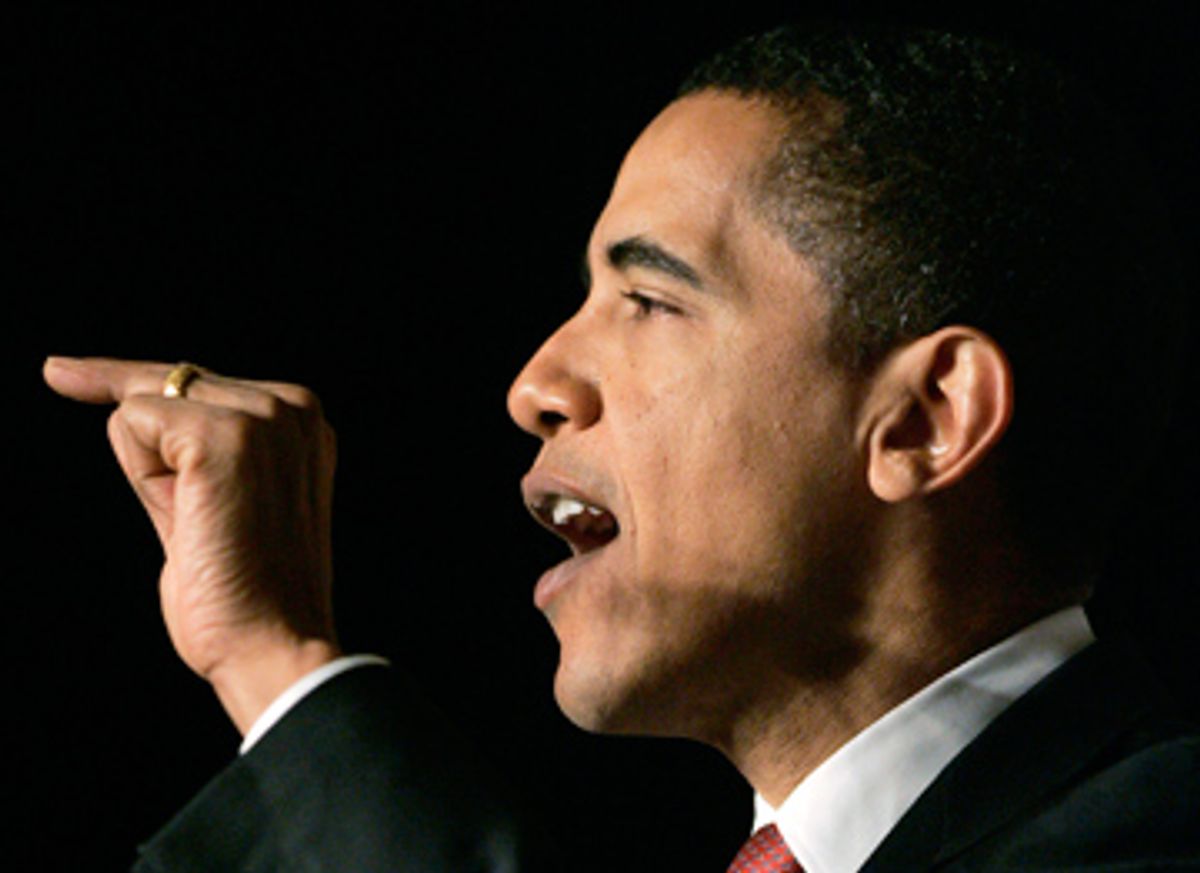 "I've been running now for 15 months," Barack Obama would announce with a whiff of weary wonder in his voice at virtually every stop on his just-completed six-day Pennsylvania bus trip. Then the Democratic front-runner would add the punch line that underscored the absurdity of this presidential marathon: "Which means that there are babies that have been born and now are walking and talking."

Fifteen months from now -- if his luck holds -- President Obama will be nearing his half-year mark in the Oval Office. Which means -- if presidential history is any guide -- that the fledgling president will already have survived a contentious confirmation battle over a top appointee, signed a major piece of domestic legislation and weathered an unanticipated foreign crisis.

Yes, we are rather cavalierly dismissing formidable obstacles named Hillary Clinton and John McCain. But so much of the current campaign dialogue is fixated on the ephemeral (the latest Pennsylvania polls, the latest fracas over 3 a.m. phone calls) that it is easy to forget that the presidency will test Obama -- or either of his two rivals -- in ways that we cannot now imagine. Sometimes in the midst of a campaign (especially during slow news weeks), there is merit in stepping back and trying to envision a would-be president like Obama in a new light.

Pennsylvania provides something of a laboratory for Obama. The Illinois senator can use the April 22 primary as an opportunity to quiet doubters by increasing his vote share among blue-collar Democrats, while simultaneously beginning to test-market themes designed to sway swing voters in the fall election. At a Tuesday town meeting in Scranton both sides of the equation came together when a man with a booming voice asked Obama how he could reach out to Republicans while remaining true to his political values.

Obama's answer offered a glimpse of how the candidate has clearly thought about retooling his rhetoric to highlight centrist themes. After first deriding George W. Bush for nearly doubling the national debt, Obama declared, "The Republicans are susceptible to a message that says, 'We're going to restore a sense of fiscal responsibility and a sense of modesty in our foreign policy ...' And Democrats have to say, 'Even though I'm a progressive, I believe in being practical.'"

Speaking to a state AFL-CIO convention Wednesday morning, Obama momentarily silenced the made-in-America union movement with the declaration, "If we're completely honest with ourselves, we have to acknowledge that we cannot completely stop globalization." But Obama also tried to add a populist edge to his speech with the frequent use of the verb "rigged." Harking back to his days as a community organizer in Chicago, Obama said, "The reason that I am standing here out in front of you is because I don't want to wake up one morning six years from now and discover that the system is still rigged against America's families."

Several times during the bus trip, Obama inadvertently channeled Michael Dukakis by promising to bring back to Pennsylvania "good jobs at good wages." (The ill-fated 1988 Democratic nominee brandished that phrase so often that shell-shocked political reporters began hearing it in their dreams.) Obama also shares a good-government reformist zeal with Dukakis and may also be hobbled with an analogous problem in winning over lunch-bucket Democrats. But the similarities end there, since Obama may be the least likely candidate to fall for an out-of-character stunt like riding in a tank looking ridiculous. For Obama possesses something that most presidential Democrats (aside from Bill Clinton) have lacked for the last three decades -- a sense of ease and comfort with himself.

It is not just the Republican attack machine that created the image of Democratic candidates camouflaging their inner being at the behest of their campaign consultants. From Walter Mondale playing down his liberal instincts in 1984 to Al Gore, who, in reality, did go through a phony phase in the 2000 campaign of wearing earth tones, the Democrats often got caught by their lack of authenticity. (Out of a sense of mercy, we will not even mention the 2004 John Kerry campaign.) It is this trap that Hillary Clinton has fallen into with her exaggerated claims of dodging sniper fire in Bosnia.

But Obama -- even when he gives way to ill-conceived gimmicks like his gutter-ball bowling misadventure -- has that rare ability to laugh it off with conviction. Monday night in Allentown all it took was Obama's rueful recollection, "I tried to bowl," to trigger gales of laughter. By the time he got to the AFL-CIO Wednesday, Obama was promising, "I will tear up the bowling alley in the White House." Rather than getting the short end of the stick, Obama is blessed -- at least at the moment -- with an ability to turn his occasional pratfalls into comic shticks.

Since the days of Franklin Roosevelt, certain candidates have had the knack of winning the allegiance (and even the love) of working-class voters without ever pretending that they eat bologna sandwiches for lunch. Obama is still groping for a formula to cross that class divide. At Muhlenberg College in Allentown, Obama referred to the burden of student loans when he said, "I didn't have a trust fund coming up." He told the AFL-CIO, "Just imagine a man who is president whose life story is like so many of your own."

It seems unlikely that Barack Obama will ever quite pull off this kind of son-of-a-millworker populism. His Kansas-Kenya heritage and his odyssey from Hawaii to Indonesia to Harvard Law School to the streets of Chicago is simply too unusual. But several times during the bus tour Obama reacted to a wrenching tale of economic woe with the simple words, "I hear you." This was not Bill Clinton biting his lip as he shared your pain, but at these moments Obama did convey a sense that he understood -- and that he connected with what he had just heard.

At almost every rally, some true believer shouts out in the middle of Obama's speech, "I love you." And each time, the candidate responds with just the slightest wisp of irritation over the interruption as he says, "I love you back." It is a small thing, rarely noticed. But buried within this exchange of affection is the sense that Obama has perhaps a healthy detachment from his own charismatic appeal.

Despite the 15 months on the campaign trail, Obama -- like any presidential candidate before he or she stands bathed in confetti at his or her party's convention -- is still a work in progress. Some of the strands of his Pennsylvania campaign will soon be abandoned and forgotten. (But not the bowling.) Others may produce themes that will be repeated in TV commercials all through the fall campaign, if Obama is indeed the Democratic nominee. That is what the campaign trail is -- a constant process of trial and error. But Obama, who had just won his Senate primary in Illinois at this time four years ago, remains the candidate who has displayed the fastest learning curve in recent political memory.