George Clooney makes it all look easy in this breezy, affable comedy. 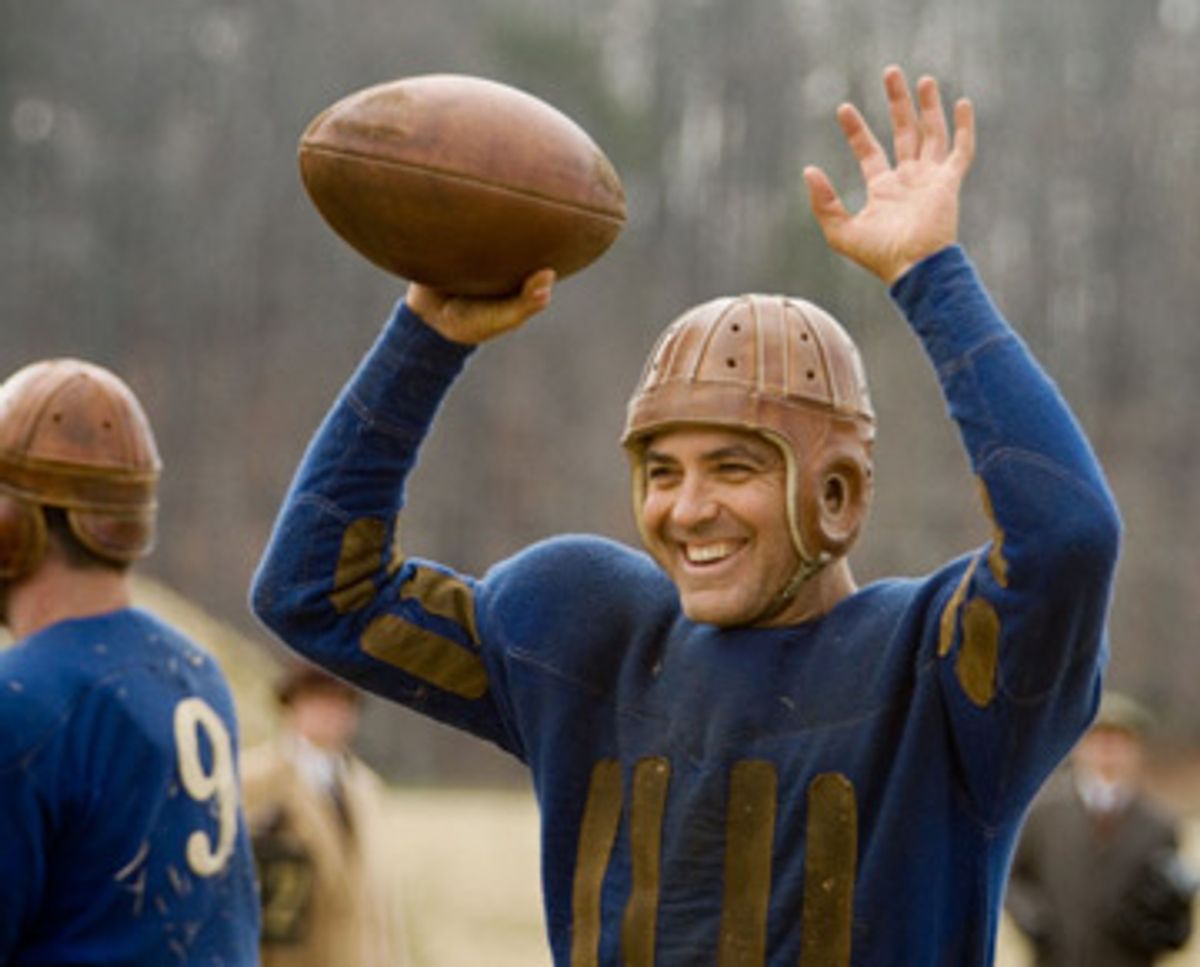 Whatever possessed George Clooney to make a comedy about professional football circa 1925, an era when professional football, at least as we know it now, barely existed? It's hard to imagine who, if anyone, could care about such a subject. And yet the sheer weirdness of the idea is what I liked best about "Leatherheads," Clooney's third picture as a director, particularly considering that in the current climate, making any movie whose objectives can't be summed up in two sentences is ill-advised.

In "Leatherheads," a pro football player, Dodge Connelly (Clooney), recruits a dashingly ordinary college star and war hero, Carter Rutherford (John Krasinski, of "The Office"), to resuscitate his moribund team, the Duluth Bulldogs. His reasoning: College football really packs 'em in. (Clooney opens the movie by showing us a college football game, complete with enthusiastic crowds roaring in the stands.) Professional football, on the other hand, attracts only scruffy ne'er-do-wells who seem to be more interested in throwing dirty punches on the field than in actually playing. And who wants to watch that? (Clooney makes the point by contrasting the college game he's shown us earlier with a solitary cow standing in a field, momentarily startled when a bunch of rowdy guys in leather helmets thunders past her.)

But Rutherford, so beamingly average and Middle American, may not be all he seems, and a scrappy lady reporter, Lexie Littleton (Renée Zellweger, in a succession of pert cloche hats and willowy tailored suits), tries to tease his secrets out of him. It goes without saying that he begins to fall in love with her, and Dodge does, too: They become rivals for her affection, which only heightens their competitiveness on the football field.

"Leatherheads" is only passably satisfying as a comedy. The picture is bumpy and unsure of itself; it would have more energy if Clooney and his screenwriters, Duncan Brantley and Rick Reilly, had streamlined it a bit. But you have to give "Leatherheads" this much: It's like no other comedy, or movie, out there these days. Clooney, one of our few old-style Hollywood movie stars himself, obviously loves old-fashioned moviemaking. He's happy to have the chance to reference pictures like "His Girl Friday" and "It Happened One Night," and he's clearly having a lot of fun revisiting, and refreshing, some of the things we've come to think of as clichés. Actually, most of these conventions are so ancient, and so lost in today's movie vocabulary, that they no longer even qualify as clichés: Dodge and Lexie -- who've only recently met and who, of course, have taken an instant dislike to one another -- find themselves sharing the same sleeping quarters on a train, and Clooney cleverly uses the upper and lower berths as a split-screen effect. Dodge, clad in modest PJs, is on top, spinning out wisecracks; while Lexie, in her silky chemise, fumes in the bunk below.

Part of the charm of "Leatherheads" is that Clooney seems to know that the big joke is really on himself: He's going to use his old-fashioned good looks while he's still got them, but he's also unafraid to tackle goofy double takes, or to grin foolishly when it's required. Zellweger, with that Photoplay-cover face, makes a good foil for him, adopting suitable indignation in the face of lines like "You're the kind of cocktail that comes on like sugar but gives you a kick in the head" -- and because she's so irresistibly cute, her own zingers hit harder than his do.

Given the unapologetically retro appeal of its two stars, and the frisky chemistry between them, "Leatherheads" isn't the movie it might have been. But it does have a breezy, affable spirit, and its very casualness is something that's extremely rare in mainstream movies these days. In a Hollywood system clogged with filmmakers desperate to prove how talented and indispensable they are, Clooney makes it look as if he's not trying too hard.