Can Stephen Colbert save America?

A new book argues that Colbert, Jon Stewart and Bill Maher are good for democracy. But is it taking late-night comedy too seriously? 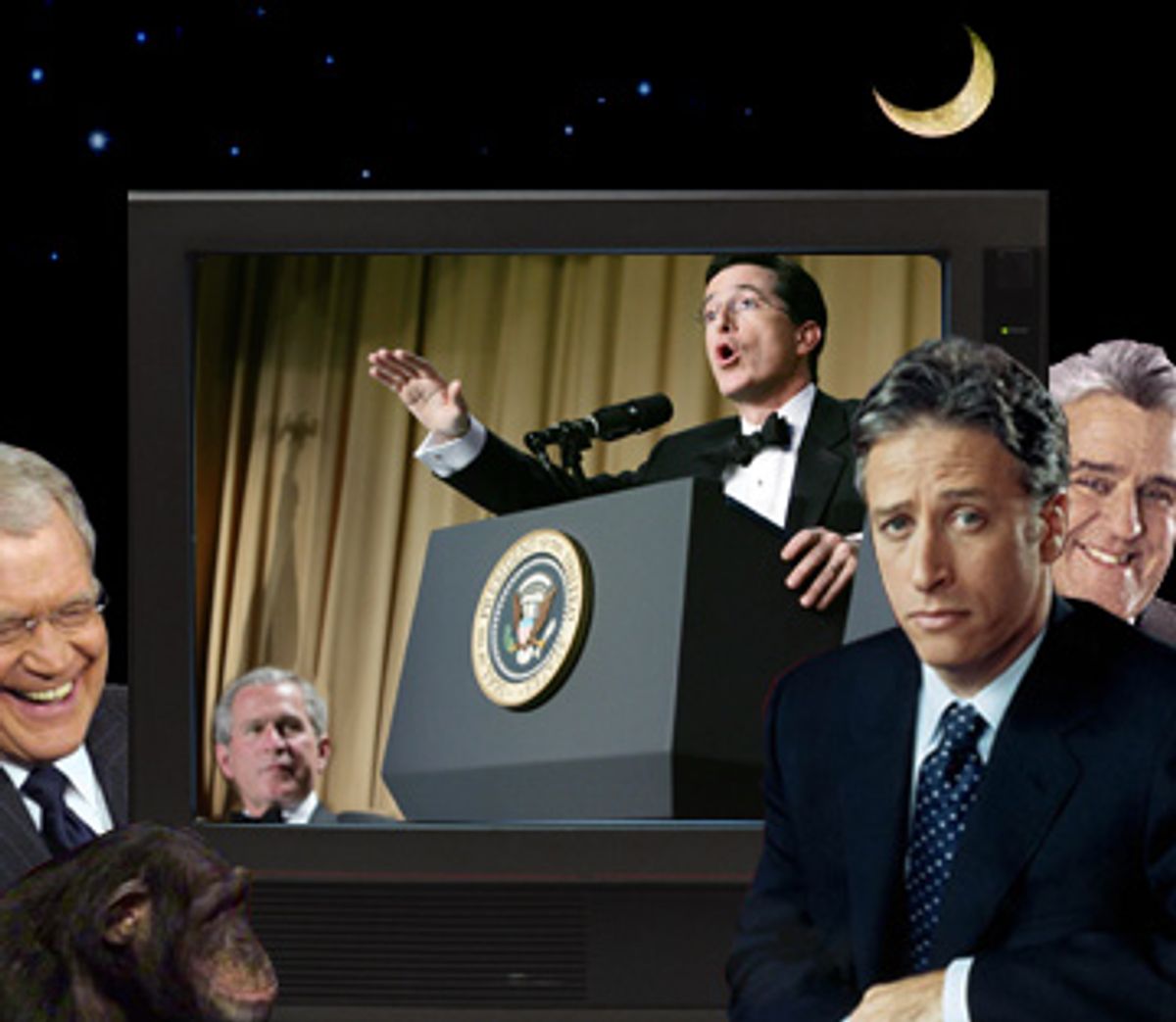 Asking an academic to explain humor to you is like getting Kenneth Starr to explain the sex act: The explainer has already waged war on the thing being explained. And so anyone looking for yuks in Russell L. Peterson's "Strange Bedfellows: How Late-Night Comedy Turns Democracy Into a Joke" will have to get past the following hurdles: extensive endnotes; a killjoy thesis, relentlessly iterated; and, most deathly of all, repeated references to Sigmund Freud and Henri Bergson.

The funny bone, in most cases, is no match for the pointy head. Peterson's head, though, is something a good deal more: zesty and contentious and sophisticated -- and capable even of coughing up a good line or two on its own. An American studies professor at the University of Iowa, Peterson is a former stand-up comic and political cartoonist who wants to know how we're changed by the act of laughing. Not just any laughing, either, but the kind that happens late in the evening, when the Lenos and Lettermans and Stewarts and Colberts are making merry with the day's carnage.

The combined ratings of all their programs may be less than Johnny Carson in his heyday, but late-night TV matters now as never before. For all its parodic inflections, it has become one of the main news sources for Americans, particularly young Americans, and politicians of every stripe happily perch themselves in whatever dunking booth they can find for the chance of an uninterrupted 10 minutes with the 18-to-29 demographic.

Four years ago, John Kerry was so eager to ride his Harley onto "The Tonight Show" stage that he agreed to follow Triumph the Insult Comic Dog. Arnold Schwarzenegger used the same forum to launch his 2003 gubernatorial bid. John McCain announced his most recent candidacy on "Letterman," and with every change of season comes Hillary Clinton, brandishing a new Top 10 list. These appearances tend to follow the same arc of humiliation. Candidate takes good-natured ribbing from host; host claps candidate on shoulder, ushers him or her offstage ... and then carries on joking about candidate as if person had never been there. Ain't America great?

Well, on that last question, Peterson is suggestively mum, but he's quite voluble on another subject: the jokes themselves. "In spite of the fact that comedy about politics is now as common as crabgrass, political comedy -- that is, genuine satire, which uses comedic means to advance a serious critique -- is so rare we might be tempted to conclude it is extinct."

Go ahead. Think back on the monologue you heard the other night on TV. Chances are good that, whether it was delivered by Jay or Dave or Conan O'Brien, it was nothing more than a theme-and-variations spin on the same old equations: Bush = dumb; Clinton = cold; McCain = old. Oh, boy, is he old! His Secret Service name is "Enlarged Prostate," and the two State Department employees who were looking into Barack Obama's passport file were also inspecting McCain's Civil War records, and John McCain is so old he remembers when Iraq was called Mesopotamia, and hey, have we cracked a Monica Lewinsky joke lately? No?

"Topical comedians," says Peterson, "keep finding new ways to tell us what we already 'know' about politicians." And because they harp so remorselessly on candidates' individual quirks -- ignoring the hard, complex, often maddening substance of policy -- they declare, in effect, that every choice is equally bad and that the system itself is "an irredeemable sham." "Election after election," Peterson writes, "night after night, joke after joke, they have reinforced the notion that political participation is pointless, parties and candidates are interchangeable, and democracy is futile."

There are good and sound economic reasons for this, of course. Someone as focused on numbers as Jay Leno is not about to sacrifice half his viewers for the sake of bringing down George W. Bush's immigration policy. Johnny Carson never even mentioned the Vietnam War. True satire can take root only in the exurbs of cable, where comic pioneers smoke out the vipers in democracy's den. Bill Maher, Jon Stewart, Stephen Colbert -- in Peterson's cosmology, these are the true heroes of late-night, because they ground even their harshest commentary in "a faith in the political process." And on that score, nobody has ascended higher than the "Lincolnish" Colbert, whose Gettysburg Address coincided with the 2006 White House Correspondents' Association dinner, a normally inane and self-congratulatory affair prodded into fretful life by Colbert's assault. Afterward, the dragoons of the press corps (Chris Matthews, Wolf Blitzer, Richard Cohen) fell over themselves declaring that Colbert had bombed. In fact, he'd been throwing bombs. Right into their laps.

"Here's how it works," Colbert explained. "The president makes decisions. He's the decider. The press secretary announces those decisions, and you people of the press type those decisions down. Make, announce, type. Just put 'em through a spell check and go home ... Write that novel you got kicking around in your head. You know, the one about the intrepid Washington reporter with the courage to stand up to the administration. You know -- fiction!"

Colbert's address perfectly meets Peterson's criteria for genuine satire: It causes its targets either to take umbrage or to "adopt a studied silence." Pseudo satire, by contrast, is often embraced and even co-opted by its purported victims. Think of Bush père inviting Dana Carvey to the White House, Janet Reno bopping around with Will Ferrell, Al Gore competing with David Letterman to tell the best Al Gore joke. The lampooned pol can safely join in the bloodletting because no blood is actually being let. "Real satire," growls Peterson, "means it."

So, under all this funny and not-so-funny business, a decidedly moral argument is being advanced. And yet I would argue that personality and aesthetics enter into it, too. Dennis Miller meets at least some of the criteria of true satire: real, albeit retrograde, convictions declaimed without fear of offending. Peterson slams him for being too beholden to GOP talking points, but it really boils down to this: He doesn't like the guy. "Like Holden Caulfield, [Miller] is not as smart as he thinks he is, but is too full of himself to notice."

No one, though, comes in for quite as much scorn as the glad-handing Leno: "more of a salesman than an artiste ... less like a political joker than a politician in his own right ... willing to stoop to almost anything." If you've ever wondered why Leno's production company is called Big Dog, Peterson says, just watch him bounding onstage every night. "If he had a tail, it would be wagging."

This is spot on, and part of the fun of "Strange Bedfellows" is matching up your own likes and dislikes with the author's. For my part, I think he undervalues Conan O'Brien, and I'm not sure why he feels the need to pound on performers like Sasha Baron Cohen, who have only a tenuous relation to the late-night world. Shock comedy, in general, brings out a latent strain of sniffiness in Peterson. Sarah Silverman, Trey Parker and Matt Stone, "Family Guy," even "Married ... With Children" are all lumped into the same unsavory stew of poo-poo jokes and mindless iconoclasm. "A society that has no taboos left offers nothing for humor to challenge," thunders Peterson. "If nothing is sacred, nothing is at stake." I would guess Lenny Bruce, back in his day, was whacked with that same dead fish.

As the late-night landscape continues to evolve, Peterson may well have cause to return to the subject, and if he does, I hope he'll explore the tension that lies at the heart of his thesis. By his own reckoning, the democratically chosen entertainments of the masses are also democracy's enemy, and the only ones who can save us from ourselves are a small and brainy elite that in fact looks less and less like modern America. It's a strange irony that late-night comedy, at least since Dave Chappelle's abdication, has become one of the most lily-white enclaves in TV. Are we still looking to white men to save the day? Is the rest of America, in Peterson's estimation, just too dumb to be trusted with democracy?