Why Hillary Clinton should be winning

Under a winner-take-all primary system, Hillary Clinton would have a wide lead over Barack Obama -- and enough delegates to clinch the nomination by June. 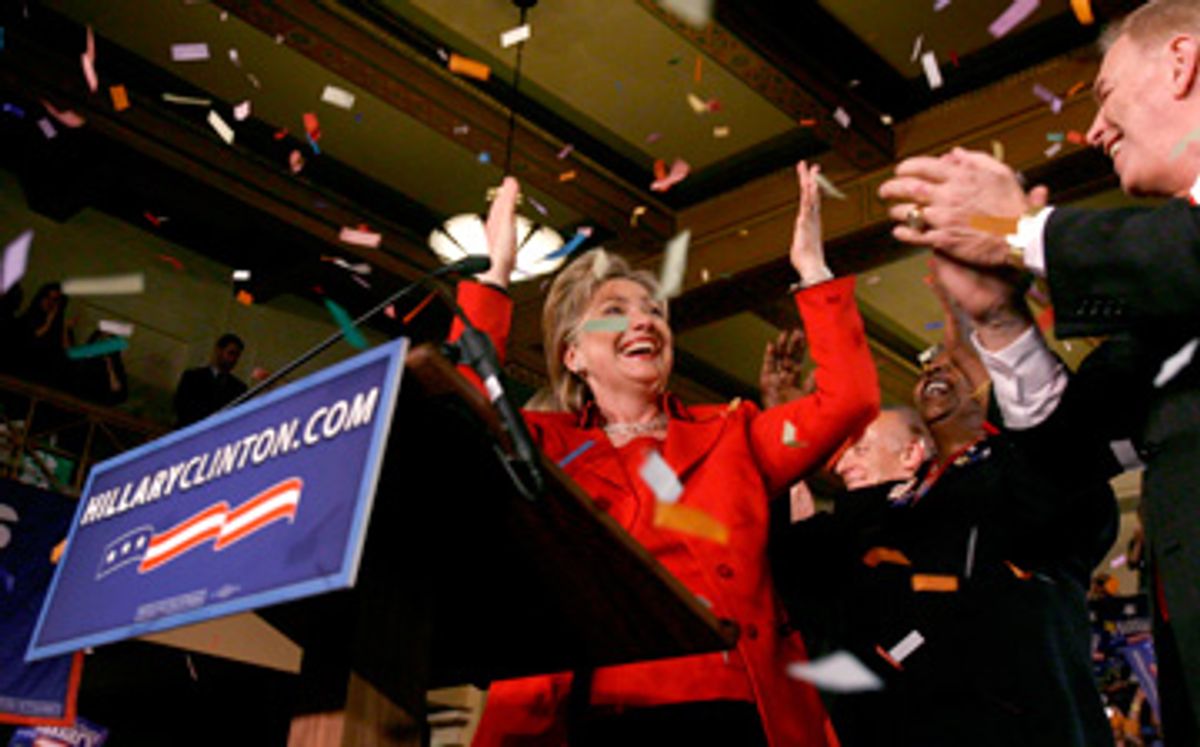 The continuing contest for the Democratic presidential nomination has become a frenzy of debates and proclamations about democracy. Sen. Barack Obama's campaign has been particularly vociferous in claiming that its candidate stands for a transformative, participatory new politics. It has vaunted Obama's narrow lead in the overall popular vote in the primaries to date, as well as in the count of elected delegates, as the definitive will of the party's rank and file. If, while heeding the party's rules, the Democratic superdelegates overturn those majorities, Obama's supporters claim, they will have displayed a cynical contempt for democracy that would tear the party apart.

These arguments might be compelling if Obama's leads were not so reliant on certain eccentricities in the current Democratic nominating process, as well as on some blatantly anti-democratic maneuvers by the Obama campaign. Obama's advantage hinges on a system that, whatever the actual intentions behind it, seems custom-made to hobble Democratic chances in the fall. It depends on ignoring one of the central principles of American electoral politics, one that will be operative on a state-by-state basis this November, which is that the winner takes all. If the Democrats ran their nominating process the way we run our general elections, Sen. Hillary Clinton would have a commanding lead in the delegate count, one that will only grow more commanding after the next round of primaries, and all questions about which of the two Democratic contenders is more electable would be moot.

Unlike the Republicans, the Democrats in primary states choose their nominee on the basis of a convoluted system of proportional distribution of delegates that varies from state to state and that obtains in neither congressional nor presidential elections. It is this eccentric system that has given Obama his lead in the delegate count. If the Democrats heeded the "winner takes all" democracy that prevails in American politics, and that determines the president, Clinton would be comfortably in front. In a popular-vote winner-take-all system, Clinton would now have 1,743 pledged delegates to Obama's 1,257. If she splits the 10 remaining contests with Obama, as seems plausible, with Clinton taking Pennsylvania, West Virginia, Kentucky, Indiana and Puerto Rico, and Obama winning North Carolina, South Dakota, Montana, Oregon and Guam, she'd pick up another 364 pledged delegates. She'd have 2,107 before a single superdelegate was wooed. You'd need 2,208 to be the Democratic nominee. That would leave her barely a hundred votes shy, and well ahead of Obama. It is almost inconceivable that she would fail to gain the required number of superdelegates easily. No more blogospheric ranting about Clinton "stealing" the nomination by kidnapping superdelegates or cutting deals at a brokered convention.

But Clinton does not now have 1,743 delegates. According to CNN estimates, Clinton has about 1,242 pledged delegates to Obama's 1,413. Most of that total is based on the peculiar way that delegates are apportioned in 2008. Some of it is because Obama's backers are using the same kind of tactics as George Bush's camp used in Florida in 2000.

Crucially, Team Obama doesn't want to count the votes of Michigan and Florida. (And let's note that in a winner-take-all system, Clinton would still be leading in delegates, 1,430 to 1,257, even without Michigan and Florida.) Under the existing system, Obama's current lead in the popular vote would nearly vanish if the results from Michigan and Florida were included in the total, and his lead in pledged delegates would melt almost to nothing. The difference in the popular vote would fall to 94,005 out of nearly 27 million cast thus far -- a difference of a mere four-tenths of 1 percentage point -- and the difference in delegates would plummet to about 30, out of the 2,208 needed to win. Add those states' votes to the totals, and take a sober look at Clinton's popular-vote victories in virtually all other large states, and the electoral dynamic changes. She begins to look like the almost certain nominee.

The exclusion thus far of these two vital states has come about because of an arbitrary and catastrophic decision made last year by Howard Dean and the Democratic National Committee. Two democratic options are available to clean up the mess: Either relent by including the existing Michigan and Florida results or hold new primaries there.

Yet in this, as has happened more than once this primary season, the Obama camp's reaction has not been to clean up the mess the party has created, but to benefit from it. Given the original primary outcomes in Michigan and Florida, Obama has rejected the idea of certifying the results. Although Obama's supporters conducted a stealth "uncommitted" campaign in Michigan after he voluntarily removed his name from the state ballot, and even though, contrary to DNC directives, his campaign advertised in Florida, Clinton still won both states decisively. This leaves open the option of holding new primaries in both states. National and state party officials have announced that such revotes could be conducted.

Yet the Obama campaign has stoutly resisted any such revote in either state. In Michigan, Obama's supporters thwarted efforts to pass the legislation necessary to conduct a new primary. In Florida, campaign lawyers threw monkey wrenches to stop the process cold, claiming that a revote would somehow violate the Voting Rights Act, and charging that a proposed mail-in revote would not be "fraud proof." (Obama himself, it's important to note, proposed a bill in 2007 to allow for mail-in voting in federal elections.)

Instead, Obama's campaign has tendered the startling proposal that he arbitrarily be allotted half of the votes already cast in Michigan and Florida. Of course, a large number of these votes -- more than a quarter of a million in Florida alone -- were not cast for Obama. He simply proposes that the party add these votes to his total, as though they were rightfully his. Saying that votes already cast for other candidates should go to him is a bold power grab, worthy of the Chicago machine organizations that claimed the votes of the recently deceased, their names gleaned from the voting rolls. By any definition of democracy, those votes do not belong to Obama; nor do they belong to Hillary Clinton, nor to Howard Dean. They belong to the voters. Obama can no more lay claim to them legitimately than his supporters can declare he has won the nomination before the remaining primaries take place.

Now consider the delegate count and its connection to the popular vote. In Nevada, Clinton also won a popular majority, despite pressure from union officials on the rank and file attending the caucuses to vote for Obama. Yet Obama claims, on the primary electoral map posted on his official Web site, that he actually won Nevada -- presumably because rules that gave greater weight to rural than urban votes mean he won a marginal edge in the Byzantine allotment of the state's delegates. Why, in deference to the clear-cut Nevada popular majority, doesn't Obama cede the majority of the state's delegates to Clinton? Because, according to the rules, he's entitled to those delegates. But why are the rules suddenly sacrosanct and the popular vote irrelevant? Might it be because the rules, and not the popular vote, now benefit Obama? And what about Texas, another state where Clinton won the popular vote but has not been awarded the majority of pledged delegates? Once again, for Obama, the rules are suddenly all-important -- because the rules, and not the popular majority, now favor him.

Obama's totals thus far have come in great part from state caucuses nearly as much as from actual primaries. (Eleven out of the 30 states and other entities he has won held caucuses, not primaries. Washington held both, as did Texas, where Obama won the caucuses and lost the popular vote.) Of the two systems, caucuses are by far the less democratic -- which may be why there will be exactly zero caucuses in this fall's general election. By excluding voters who cannot attend during the limited times available, the caucuses skew participation toward affluent activists and students, and against working people, mothers and caregivers, and the military. Clinton's victories, by contrast, have come overwhelmingly in states with primaries, not caucuses. Obama is certainly entitled to the delegates he won in the caucuses. But he can hardly, on that account, claim that he is clearly the popular favorite.

In 2004, Democrats lost most of the states where Obama's delegates come from now. The Democrats are likely to lose most of those states again in 2008, no matter how much his supporters speak of winning crossover votes. (Idaho and Wyoming, for example, where Obama won caucuses, are not going to vote for either Clinton or Obama come fall.) Of the remaining states that Obama has won, only one is a large state with a considerable number of electoral votes -- his home state of Illinois. Clinton has won the popular vote in all of the other large states -- and has done so in primaries, not caucus decisions. The arithmetic here is simple: Because of the flawed system, the delegates from the states that Obama has won, many of which vote strongly Republican, represent far fewer Democratic voters than those from the states Clinton won.

Finally, there is the disquieting question of acknowledging what kind of democracy will determine who wins the presidency in 2008. Strong arguments could be made that, in a thoroughgoing democracy, voters choose presidents with a direct, plebiscitary system. The candidate who commands a majority (or, perhaps, a plurality) of the popular vote nationally wins the election. But, interesting as they might be as an academic exercise, such musings are irrelevant to the politics of 2008. We have a winner-take-all system, but it operates on a state-by-state basis (except in Maine and Nebraska, where it's winner-take-all by congressional district). Like it or not, we will choose the president under the indirect and fractured democracy of the Electoral College.

Obama has tried to reinforce his democratic bona fides by asserting his superior electability, and by claiming that Clinton's supporters are more likely to back him in November than vice versa. The polls, however, show otherwise. And even more important, the polling data on the electoral vote totals show an outcome very different from the one suggested by Obama. The latest state-by-state figures (as of late March) updated from SurveyUSA, indicate that if the election were held today, Clinton would defeat McCain in the Electoral College because of her lead in big, electoral-vote-rich states such as Florida, Ohio and Pennsylvania -- and McCain would beat Obama.

In the final analysis, though, the fights inside the Democratic Party aren't really about either an ideal American democracy or the American democracy that actually exists. According to the Obama campaign, democracy is defined as whatever helps Barack Obama win the Democratic nomination. There is nothing intrinsically wrong with a candidate arguing this way. But everybody should see it for what it is -- not something new or transformative, but one of the oldest ploys in the playbook of American politics.