The front-runner is trapped in an unchanging race that will be hard for him to lose -- but is proving impossible for him to end. 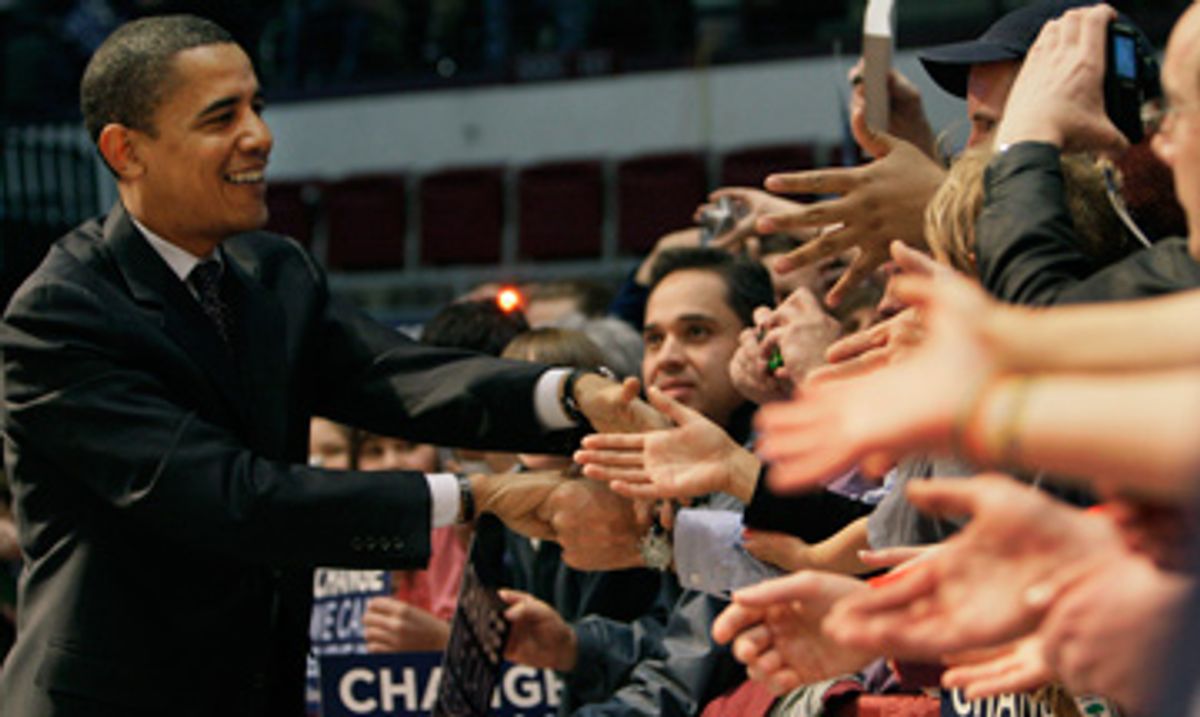 In a black zippered Barack Obama '08 sweatshirt, with the downtown skyline hovering outside his 11th-floor office window, David Axelrod tried to imagine where the presidential campaign might be right now if a persistent foe named Hillary Clinton did not exist. "Obviously, we'd be focused on McCain and the general [election]. And to some extent we've got to be doing that right now," said Axelrod, the architect of Obama's rise from upstart challenger to the odds-on favorite for the Democratic nomination. "Remember we were already into the general at this point four years ago."

But Axelrod and the rest of the Obama high command are also realists. They radiate the quiet confidence that Obama will be the nominee and the fatalistic acceptance that the timetable requires patience. They understand that in the April 22 Pennsylvania primary, virtually every demographic cohort of this largely white, middle-aged and older, non-college-educated, economically hard-pressed electorate favors Clinton. Despite Obama's delegate lead (the Washington Post gives him a 134-vote edge with just eight state primaries to go), the finish line still shimmers in the distance. "The fundamentals of the race haven't changed," Axelrod said. "But there are cards to be played before anyone makes a decision. This can go on for a while."

Indeed it can, although the promise by Amy Poehler channeling Hillary Clinton on "Saturday Night Live" to keep campaigning until "after the Inauguration" may be an exaggeration. After all, never in modern political history has a candidate in Clinton's predicament -- trailing, but having won more than 45 percent of the delegates in the primaries and caucuses -- not taken the fight all the way to the convention floor. Maybe if Clinton fails to win either the Indiana or North Carolina primaries on May 6, the former first lady might feel compelled to convene a Washington press conference to make "an important political announcement." Or possibly, as some in the Obama camp privately hope, Clinton (who is no longer claiming to be raising $1 million a day) will run out of money before the primaries end with a whimper June 3 in South Dakota and Montana.

There have been persistent rumors that Obama has a secret cache of superdelegate supporters ready to be unveiled with a dramatic wave of the wand. But, in truth, many of the surprise endorsements (recently, most notably Pennsylvania Sen. Bob Casey) have been almost as much a surprise to the Obama campaign as to reporters. Democratic Party chairman Howard Dean, whose powers are limited beyond simple exhortation, has urged the more than 300 uncommitted superdelegates to choose sides by July 1 in order to anoint a de facto nominee. But even that accelerated date is nearly three months away.

Even though the Obama campaign wishes that it had the luxury of moving organizers now flooding North Carolina and Indiana into a general-election tossup state like Ohio, there is little definitive evidence that the protracted nomination fight is currently hurting Democratic prospects in November. Pennsylvania is the first major state in months where the Obama campaign had the time to enroll new voters for the primary before the registration deadline. The result (which, admittedly, is also due to other factors): 161,000 new Democrats signed up since November while Republican registration declined.

Take Montana, one of those Western states that have been turning blue in recent elections with a Democratic governor and two senators. After 4,000 Democrats (rather than the usual 600) turned out to hear Obama and Clinton at Saturday night's double-barreled Montana party fund-raising dinner, it will be hard to convince activists in Butte and Helena that it would be better for the party if the race were settled before the June 3 primary. West Virginia was once a Democratic bastion, even refusing to join the 1980 and 1988 GOP landslides, but it went for George W. Bush in the last two elections. Since West Virginia (May 13) is the only primary that week, Obama and Clinton are likely to stump the state with an intensity not seen in that corner of "almost heaven" since the legendary making-of-the-president John Kennedy-Hubert Humphrey battle in 1960. There will be chagrin in Charleston and heartburn in Huntington if the primary becomes meaningless after a Clinton withdrawal.

The easiest way to end the contest is if ordinary Democrats in late-deciding states like Pennsylvania said to themselves, "They're both good candidates. And even though I like Hillary a bit better, I'm going to vote for Obama to finish this thing off." So far there is no evidence -- neither anecdotally nor in the polls -- that voters are willing to give up a choice to achieve (warning: cliché alert) closure. Believe it or not, most voters do not check the polls every morning, nor do they watch the endless parade of TV talkers explaining how, because of proportional representation, there is virtually no way that Clinton can catch up in pledged delegates to Obama, even if she sweeps most of the remaining primaries.

These days, Hillary Clinton seems propelled by both Scarlett O'Hara's dogged denial ("Tomorrow is another day") and the cockeyed optimism of Mr. Micawber ("Something will turn up") in "David Copperfield." But this week, all that has turned up for the New York senator has been more bad news. Her campaign planned the Friday afternoon document dump of the Clintons' tax returns at the shank end of a slow political news week. The couple's post-White House income of $109 million signified buck-raking that is hard to camouflage. Particularly eye-popping was the $15.4 million that Bill Clinton received for unspecified work from Ron Burkle's Yucaipa investment firm, which boasts the ruler of Dubai as a major investor. Probably more harmful was the news that campaign strategist and pollster Mark Penn met with Colombian officials last week to plot how to win congressional passage of a free-trade agreement that candidate Clinton fervently opposes. Penn insisted that he was acting in his capacity as the CEO of Burson-Marsteller. And it turned out to be a good thing for Penn that he had never given up his lucrative day job, since Sunday night the Clinton campaign announced that he had stepped down (or, in truth, been pushed out) as chief strategist. Even the fig leaf that Penn would still be providing polling services to the Clinton campaign was undermined by the recent recruitment of a rival pollster, Geoff Garin.

When Obama meets with his speechwriters, he often uses the line, "This is the frame." If one were framing a narrative of this presidential race, a central theme would be the opportunities that Hillary Clinton has squandered. If she had abandoned the Jan. 26 South Carolina primary as unwinnable, Bill Clinton would not have had the opportunity to help mobilize the black vote against her candidacy. If the Clinton campaign had reduced its internal organizational problems back in 2007 by bringing in Maggie Williams as campaign manager then, the resources might have been in place to hotly contest the February caucuses in which Obama ran up lopsided delegate victories. (Noting the curious absence of Clinton organizers in caucus states like Alaska, Idaho and North Dakota, Obama staffers would ask themselves every morning, "Are they here yet?"). And if the Clinton campaign had aggressively pushed for revotes in Michigan and Florida in February (instead of belatedly jumping on the do-over bandwagon in mid-March), there might have been time and the political will to give Clinton a chance to add to her impressive roster of big-state primary victories.

Instead, we are locked in a campaign that is difficult for Clinton to win and near impossible for anyone to end. Small wonder there is a feeling that, with the Pennsylvania balloting still more than two weeks away, the Democratic race is in suspended animation. During a similar static period during Bill Clinton's 1992 campaign, I recall James Carville showing up in the bar at the Capital Hotel in Little Rock late one night quizzing every reporter in sight about the "horse latitudes." Carville was not prepping for a correspondence-school exam in meteorology, but trying out a metaphor (and a good one at that) for a campaign that had become becalmed like the clipper ships of old, where the only alternative was to throw the horses overboard to reduce weight and pick up some wind.

This time around, it is Hillary Clinton desperately praying for the political winds to propel her out of the doldrums. But barring a Clinton string of victories through West Virginia on May 13, the weather reports are all Obama.