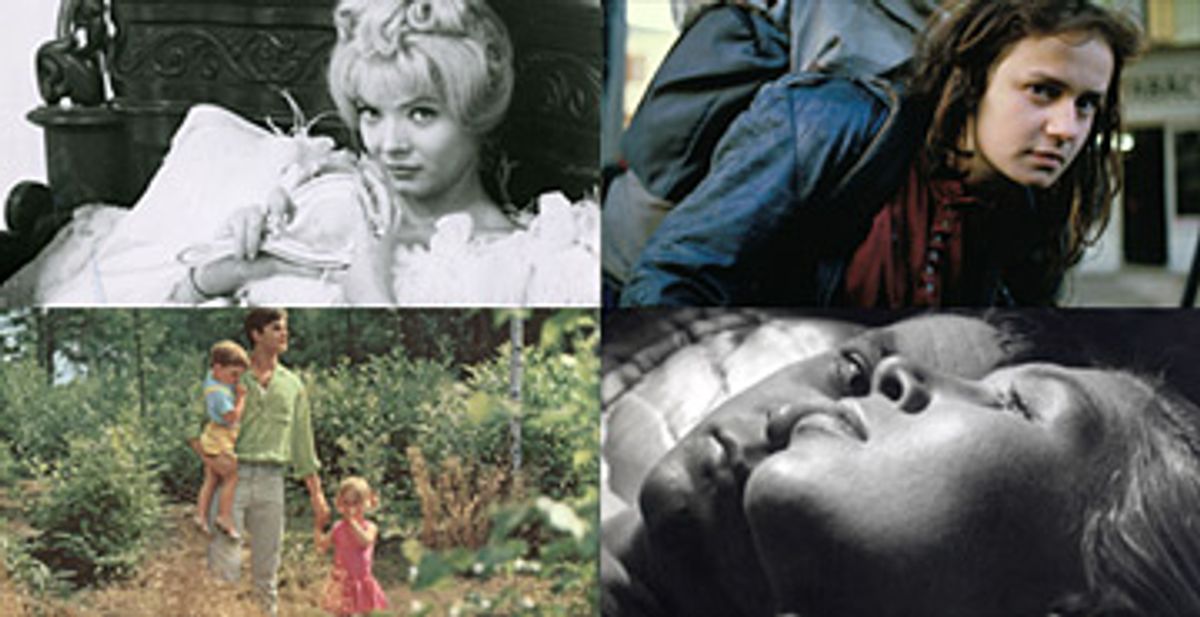 In 1954, when the French film industry was a sclerotic affair that mostly produced old-fashioned, big-budget historical dramas shot on soundstages, a philosophy student and photographer with no directing experience took a tiny crew and a couple of actors to an impoverished Mediterranean fishing village and made a movie. That movie was called "La Pointe-Courte," after the tiny settlement where it was shot, and its director was 25-year-old Agnès Varda.

Seen from more than half a century's distance, as the first entry in the Criterion Collection's new DVD set "4 by Agnès Varda," "La Pointe-Courte" is both awkward and dazzling. It combines quasi-documentary footage -- Varda credits much of the dialogue to the townspeople -- with an existentialist-flavored tale of a crumbling Parisian marriage, delivered by actors Philippe Noiret and Silvia Monfort in deliberately flat, stilted exchanges. Its horizontal black-and-white landscapes remain spectacular, and even without knowing that no European filmmaker had done anything like this before, you can see that "La Pointe-Courte" is the work of a highly original and acerbic visionary.

There was no movement around Varda when she made "La Pointe-Courte," which is now considered as a prophetic precursor or opening salvo of the French New Wave. Furthermore, you could argue that after she made "Cléo From 5 to 7" in 1962, her spectacular real-time tale of a vain, spoiled and beautiful young woman as she travels across Paris to a date with mortality, Varda walked away from anything that could be considered the New Wave to hew her own peculiar path. Varda was the only significant female director among the New Wave auteurs, and her view of sex and love was always more acrid and less romantic than that of her male counterparts.

But if Varda's perspective as a woman is important to her work, her perspective as a photographer and visual artist is even more important. As she has said, "Cléo From 5 to 7" -- which is, if you ask me, one of the greatest French films of the '60s -- can be described as a portrait of a woman overlaid on a documentary about Paris. Perhaps the prickliest and most puzzling film in this set is "Le Bonheur" ("Happiness") from 1965, the story of a happily married young carpenter who falls in love with another woman, with tragic consequences that barely seem to affect him. On one level, Varda is launching a Marxist broadside against bourgeois conventions of love and marriage. On another she is creating a proto-Pop Art Technicolor canvas, whose "message" is encoded in its rotating primary colors and Mozart score, and cannot be conveyed in words.

After "Le Bonheur," the Criterion set skips ahead 20 years to Varda's social-realist masterpiece "Sans toit ni loi," released in the United States as "Vagabond." (The title could better be translated "Without Roof or Rules.") Starring the teenage Sandrine Bonnaire as a female drifter who travels through the squatter society of mid-'80s France, "Vagabond" is a beautiful, almost contemplative picture that refuses to judge Bonnaire's character even as it follows her inescapable downward spiral. It also marked a moment of transition, as Varda's career shifted decisively toward making documentaries from this point onward. Her only narrative films in the last 20 years is 1991's "Jacquot," based on the memoirs of her late husband, "Umbrellas of Cherbourg" director Jacques Demy.

I wish "Jacquot" were in this set, actually, along with Varda's drastically underappreciated 1987 feature "Kung-Fu Master," the story of a love affair between a 15-year-old boy and a 40-year-old woman. (That's an Agnès Varda topic if ever there was one.) I've never seen Varda's 1966 feature "The Creatures" or her 1977 "One Sings, the Other Doesn't," but those aren't to be found here either. As for Varda's alternate career as a documentarian, stretching from her lefty political films of the '60s to "The Gleaners and I" in 2000, surely those deserve a Criterion set of their own.

I'm late in covering "4 by Agnès Varda," and that's because I didn't want the feeling of being finished with it. But one is never finished with Varda. She is so uncompromising, so resolutely unfashionable, so undigested by film theory and film history. Each of these four movies is like a master class in artistic independence, an unsatisfactory Zen koan whose only possible answer is its own existence. In the Criterion tradition, there are numerous extras here that will keep Varda fans busy, including three of her rarely seen late-'50s short films, several interviews and making-of documentaries, an impossibly weird conversation between Varda and Madonna (about "Cléo From 5 to 7," whose central character might as well be Madonna), an intellectual debate about "Le Bonheur" (French television, at its finest!), and essays by Chris Darke, Adrian Martin, Amy Taubin and Ginette Vincendeau. That's all great, but your real assignment is to see these movies. That's challenging enough.