Cashing in on the Clinton campaign

Where do all those little-guy donations go? Ask top strategist Mark Penn, as he exits with millions in consulting fees. 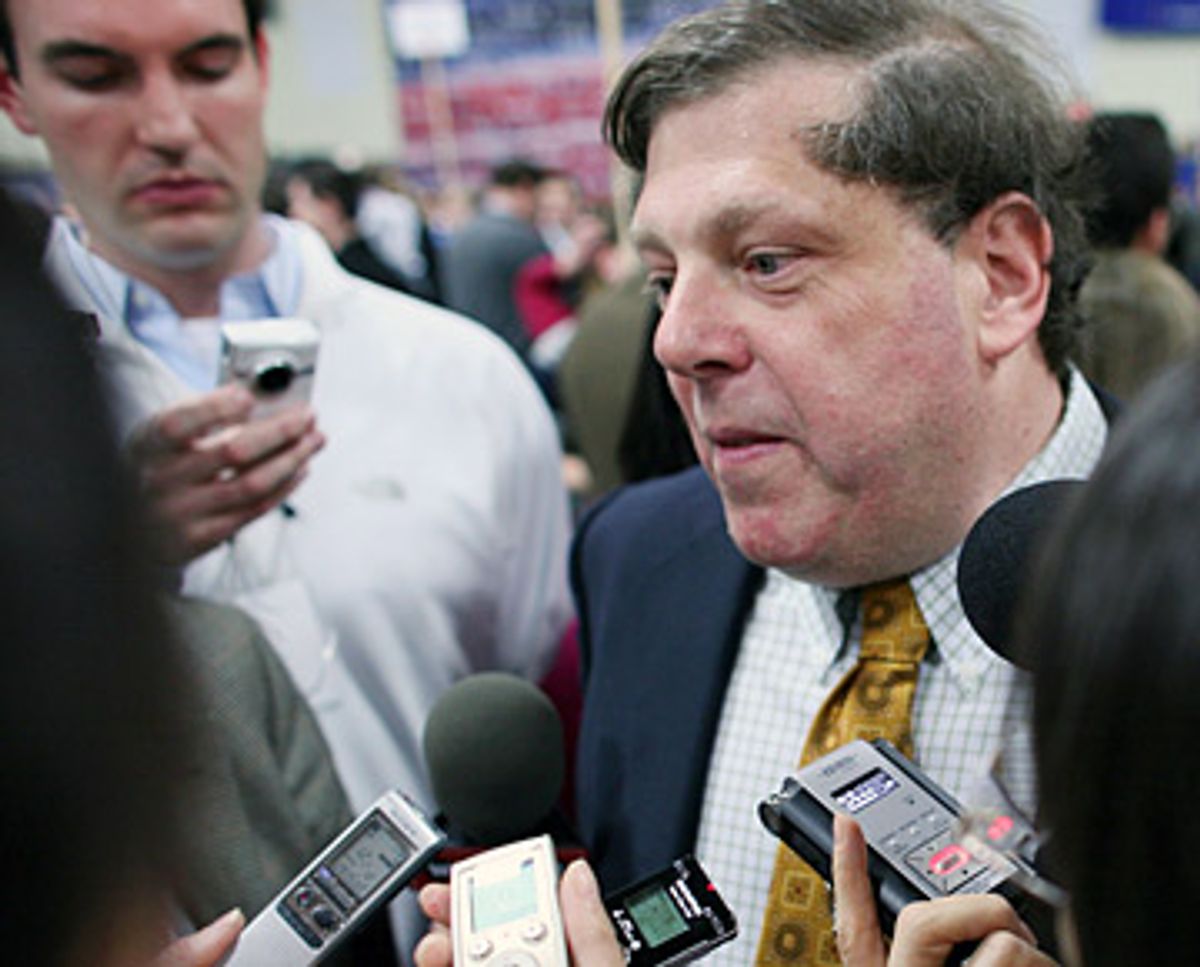 It should have been easy to predict, in retrospect, that Mark Penn would get himself into trouble for moonlighting while he served as Hillary Clinton's chief strategist. After all, his firm had billed only $14 million for his work on the campaign. How's a guy supposed to live on that?

Actually, for Penn, who resigned Sunday night, Clinton's campaign for the White House has been about as effective an economic stimulus program for himself as anything his clients have ever proposed for the nation. Clinton paid Penn a total of $8.9 million for direct mail, according to CQ MoneyLine. She paid Penn for polling, at $2.8 million. She even paid Penn $160,000 for consulting about polling, which presumably involved his telling her what an excellent pollster she'd hired. By Feb. 29, she also owed Penn's firm another $2.5 million for "consulting/polling," federal records show. March expenditures won't be revealed for another few weeks -- but through February, Clinton spent nearly 9 percent of the $138 million she's burned through in the race on Penn's firm alone.

Penn is this year's glaring example of a problem that has dogged American politics for years: the runaway costs of campaign consultants. But at a time when both Democratic presidential campaigns are boasting about riding a tide of small-dollar donations from everyday folks, out-of-control consultant fees seem to be an even more egregious waste of cash, undermining rhetorical claims that every supporter's dollars count.

Strictly speaking, all that Clinton money didn't go to Penn himself, but to Penn, Schoen & Berland Associates, which Penn runs. It's a branch of the public relations firm Burson-Marsteller, which Penn also runs, and which the government of Colombia hired to promote a free-trade deal that Clinton, like many of her supporters, opposes -- which is what led to Penn's resignation. It remains unclear how much money Penn got directly from the campaign. But considering he bought his Georgetown home for $5.1 million in 2003 (after which he proceeded to irritate his neighbors by building an underground garage), it's safe to say that his personal bank account hasn't suffered from his campaign work.

Getting rich off free-spending campaigns is, of course, a time-honored tradition in politics, and it isn't just Mark Penn who does it. Consultants typically take a percentage of the money a candidate spends on whatever service it is they provide. Media consultants make more whenever they convince their clients they need to cut another ad, pollsters make a profit on each survey, and so on. Penn's counterpart as chief strategist on Barack Obama's campaign, David Axelrod, has seen at least $1.2 million paid to his Chicago-based firm, where David Plouffe, Obama's campaign manager, was a partner until he left to go work for the campaign. (Plouffe makes $12,000 a month in salary.) Obama has paid his chief pollster, Joel Benenson, $635,000 so far. Bob Shrum made at least $6 million for not getting John Kerry elected president four years ago. Raise your hand if you think you could have accomplished the same job for less.

Campaign finance experts say most people who give to candidates figure it's being spent on TV ads. What few of them know is how much of the "TV ad" budget winds up paying for a consultant's beach house. It's just about impossible to figure that out from public filings the way things stand now -- the Federal Elections Commission is far more concerned with where political money is coming from than where it's going. Candidates disclose in broad categories how they spend their cash -- like "media," "polling," "consulting," etc. It's up to the operatives to decide how much detail to provide, and most provide none at all. So the public is left with rough metrics to go by.

"We all know that these guys are making this much money," said Democratic election lawyer Leslie Kerman. "You can tell by the houses they buy and the vacation homes. They're all talkers. They don’t talk about how much money they make, but they talk about what they buy with all the money they make."

The Clinton team seems to have been loose with the purse strings even by current standards. With less money to spend, Clinton has paid her top officials more than Barack Obama has paid his, winning fewer elected delegates in the process. Besides Penn, there's Clinton's communications director, Howard Wolfson. He appears to have set up a consulting firm for the sole purpose of working for Clinton, called Gotham Acme, which has taken in more than $700,000 since the race started. No other client has paid the firm a cent since 2003. (Meanwhile, John McCain's team has probably made the least money of any successful candidate's team in history; his senior advisors -- mostly well-compensated lobbyists in their day jobs -- worked without salary for months after his campaign's near-collapse last summer. Some are still not getting paid now.)

All this overspending used to be more or less a victimless crime, back when campaigns were funded almost entirely by lobbyists and rich supporters who could afford to send in a $2,300 check for the primaries and another $2,300 check for the general election without worrying how the money was spent. But this is the year of the small donor. Contributions of less than $200, small enough that federal regulators don't track them individually, have accounted for 41 percent of Obama's budget so far, and 26 percent of Clinton's. In February, for the first time ever, small donors made up the majority of contributions to both candidates. Suddenly, political fundraising is a game for the masses.

That's become a point of pride for both Obama and Clinton. The stories have been repeated so often that they seem apocryphal, even though campaign aides swear they're true: students skipping meals to send money to him, seniors doing the same with expensive medicine to send cash to her. Obama likes to talk about a woman who slipped him an envelope with a money order for $3.01 and a "simple verse of scripture tucked inside." Not to be outdone, the Clinton campaign boasts that donations flooded in once supporters learned that the candidate had dipped into her own vast fortune to lend her organization $5 million. "Once they saw that she had put her own money into the race, people said, 'Hillary, if you're in, fighting, I know you need the money, and I want to fight with you,'" Terry McAuliffe, Clinton's campaign chairman, told reporters in late February. "There are $35 million worth of people who have skipped dinner, who have not taken medication, so that they can fund this campaign."

But what are they getting for their money? Do the seniors who aren't taking medication really think Wolfson's daily conference calls with the press are worth the $8,000 a week he made while Clinton lost primary after primary in February? Did Penn's direct mail really give Clinton an edge worth $8.9 million in the race against Obama? Don't candidates who are suddenly raising most of their money from people who can barely afford to send it in have some responsibility not to waste it once they get it? The sheer amount of money raised -- and spent -- this election ought to finally focus some attention on the consultant pay scales quietly established over the years in Washington.

Of course, since Clinton never felt the need to fire Mark Penn, the overpaid pollster, until he turned into Mark Penn, the overpaid pollster with a politically inconvenient client, maybe not much will change. Even if campaign aides wanted to rein in consulting fees, they might not have time to do anything about it. "There's so much going on in the campaign that they don't usually have the financial controls to go back and say, 'Wait a minute, this consultant's making $500,000 in profits this month,'" said Kerman, who tries to push her clients' consultants to take flat fees instead of percentages.

Maybe the whole Penn saga will encourage some donors to contact campaigns to demand more accountability regarding overpaid consultants. As for Penn himself, he isn't even really departing. He may be out as chief strategist, but reportedly he'll keep providing polls and advice to Clinton.

For a fee, of course.