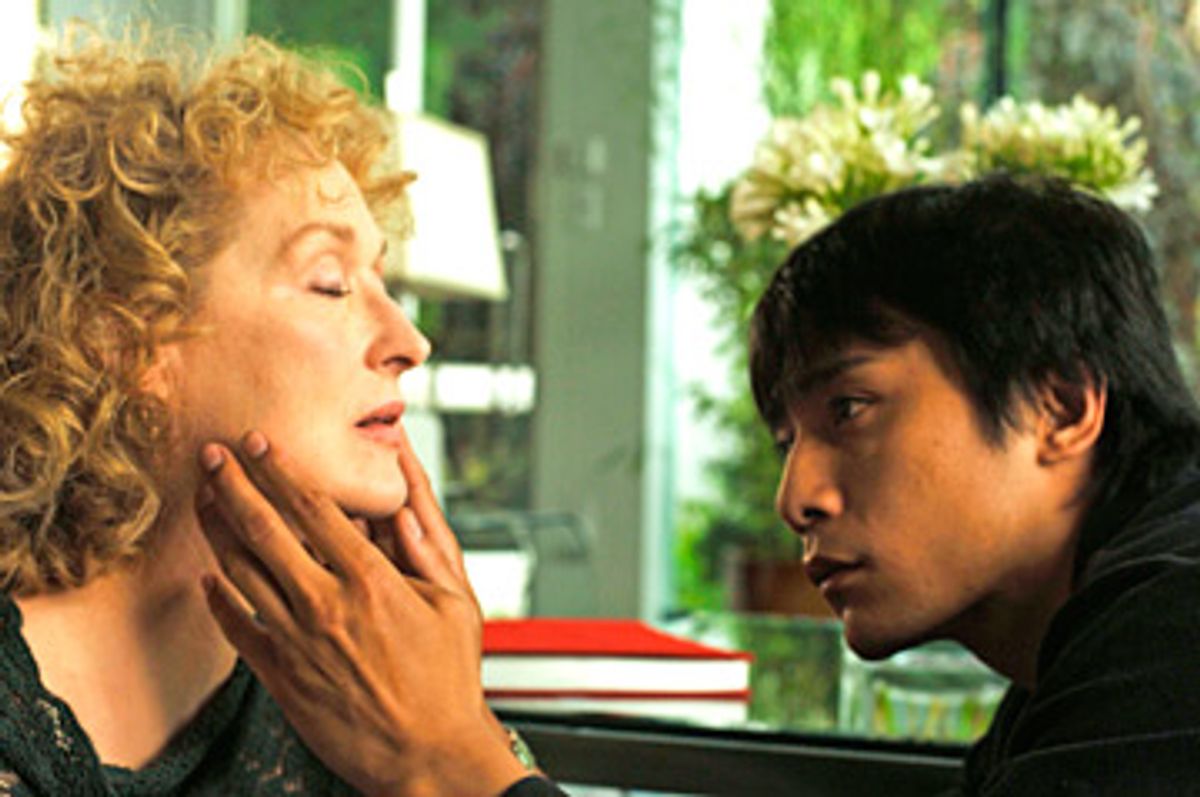 "Dark Matter," the filmmaking debut of Chinese-born opera and theater director Chen Shi-zheng, gets full credit for slamming head-on into any number of hot-button topics in American society. First and most interestingly, Chen's film captures, from the inside, the strange and insular world of the Chinese graduate students who increasingly dominate the math and science fields at major American universities. It also engages the subtle forms of racism and stereotyping that continue to inform non-Asians' perceptions of this "model minority." I guess this is a spoiler, but there's no way around it: Finally, "Dark Matter" tries to convey how an underslept, overworked, culturally dislocated student could erupt in a psychotic outburst of violence, as has happened in a couple of notorious cases.

Chen's film (written by Billy Shebar, from a story he co-wrote with Chen) is based on a shooting incident at the University of Iowa in 1991, and was completed well before the Virginia Tech shootings in April 2007. Neither the movie nor the Iowa case bears any resemblance to the Virginia Tech case, in which the shooter was an undergraduate English major and a longtime legal resident of the United States, not a foreign student. (If you don't want to know more about the plot of "Dark Matter," don't read news accounts of the Iowa case, as the fictional events follow the real ones closely.)

"Dark Matter" is rich with interesting themes and ideas, from the slippery, sycophantic nature of academic success to the Orientalist attitudes of rich Americans and the outer edges of astrophysical theory. It's got a terrific cast, with young Chinese star Liu Ye (of Chen Kaige's "The Promise" and Zhang Yimou's "Curse of the Golden Flower") as Liu Xing, the ambitious, awkward student protagonist, Meryl Streep in a peculiar supporting role as the small-town socialite who mother-hens him and Aidan Quinn as the pompous professor who at first embraces Liu Xing and then kicks him to the curb, with disastrous consequences. I wish I could tell you that all that adds up to a good movie.

If it doesn't, it certainly isn't the actors' fault. Liu Ye is wonderful as the brilliant but painfully naive Liu Xing, child of a poor Beijing family who has won a prized scholarship to an unnamed university in the Mountain West. ("Dark Matter" was filmed at a community college in Utah.) Liu's puppyish eagerness to please his academic mentor eventually comes into conflict with his growing sense that Quinn's lordly professor, Jacob Reiser (progenitor of the string-theory "Reiser model" of the universe's genesis), is pursuing a cosmological dead end. Liu Xing shares a rundown apartment with several other Chinese grad students; their leisure hours are few, but devoted to such traditional immigrant delights as junk food, beer and stolen cable-TV porn. When Chen stays focused on the odd, liminal status of these strangers in a strange land -- alternately feared and desired, patronized to and ghettoized -- "Dark Matter" feels like a glimpse into an unknown world.

But Quinn's Reiser never rises above academic stereotype, and in general the portrayal of university life is dismayingly thin. Streep expends her prodigious actorly technique on a brave performance (and some truly ghastly hair and wardrobe choices) whose purpose in the story is never clear. For all his experience as a stage director, Chen seems to lack cinematic instincts. "Dark Matter" has neither the technical command of an art-house film nor the manufactured intensity of a grade-B thriller, yet it's also too cheap and dirty to feel like a Hollywood-scale drama. It's an inelegant experiment that captures many intriguing moments as they pass, but ends up utterly baffled by the question of how its delightful central character becomes a tabloid-ready monster.

"Dark Matter" opens April 11 in New York and Boston; April 18 in Los Angeles and Austin, Texas; April 25 in Madison, Wis.; May 2 in San Francisco; and May 16 in Chicago, with more cities to follow.