A harrowing account from a man the CIA handed over to Jordan -- smuggled from prison on tiny paper -- exposes U.S. complicity in torture. 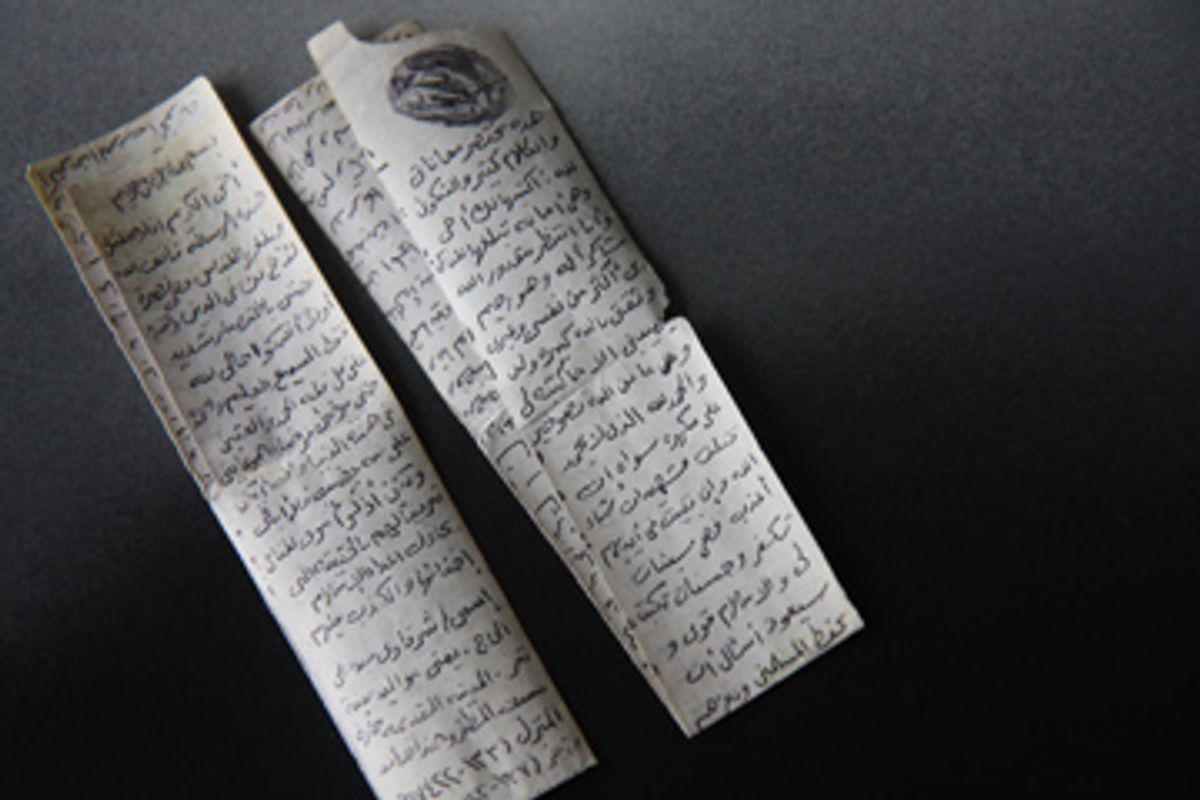 On a recent trip to Amman, Jordan, during a visit to the home of someone who had been detained by the Jordanian intelligence service in 2002, I was given two very thin strips of paper covered with Arabic writing and marked with a thumbprint. Curled up into a tight spiral, they were no bigger than the cap of a pen.

My contact, who had smuggled the papers out of intelligence detention a few years previously, told me that the message therein had been written by a prisoner who had been detained with him. He said it gave a detailed account of that person's experiences.

That evening, in my hotel room, an Egyptian colleague translated the text, word for word. Stunned by its contents, I transcribed the message into electronic form and sent it into cyberspace for safekeeping.

The message's author was a Yemeni terrorism suspect named Ali al-Hajj al-Sharqawi, who was arrested in Pakistan in February 2002. Though the message was undated, it was clear from the narrative that it had been written in October 2002.

Sharqawi said that he had been delivered to Jordan by the CIA. Unknown to the outside world, he was held as a secret prisoner by the Jordanian intelligence service: unregistered, cut off from all communication and hidden during visits by representatives of the International Committee of the Red Cross.

In the note, which he managed to slip to my contact without his captors noticing, he gave what he called a "short summary of my sufferings."

"They beat me up in a way that does not know mercy," Sharqawi wrote, referring to his Jordanian captors, "and they're still beating me. They threatened me with electricity, with snakes and dogs ... [They said] we'll make you see death."

Sharqawi described his interrogations, explaining that the Jordanians were feeding his responses back to the CIA. "Every time that the interrogator asks me about a certain piece of information, and I talk," Sharqawi said, "he asks me if I told this to the Americans. And if I say no he jumps for joy, and he leaves me and goes to report it to his superiors, and they rejoice."

I didn't dare leave Sharqawi's note in my hotel room, so I carried it in my purse for the two weeks that I remained in Jordan. During that time, I interviewed several Jordanians who had been held with Sharqawi and other prisoners who had been handed over to Jordan by the CIA. Former detainees spoke of a period, in 2002-2003, when the third floor of the intelligence service's detention facility was "full" of foreign prisoners who had been delivered by the CIA. Although the prisoners had been held in solitary confinement, they had managed to communicate by knocking on cell walls and speaking surreptitiously through cell windows.

How did it come to pass that these men -- non-Jordanians all -- had been brought to Jordan? The practice of extraordinary rendition, or turning over terrorist suspects abroad, goes back to the Clinton administration, when the CIA transferred several Egyptian terrorist suspects from countries such as Albania and Croatia to Egypt. After Sept. 11, 2001, however, the CIA's rendition practices changed. Rather than returning people to their home countries to face "justice" (albeit justice that included physical abuse and grossly unfair trials), the CIA began handing people over to third-party countries to be detained and interrogated -- countries known to use torture.

Jordan is not the only country to which the CIA has sent prisoners for proxy detention. Egypt has held several such prisoners, and Morocco is believed to have held some. Yet the Jordanian intelligence service has long had an exceptionally close and cooperative relationship with the CIA, so the CIA relied heavily on Jordan for holding prisoners outside of the protection of the laws.

Largely through my interviews in Jordan -- piecing together accounts by former and current prisoners -- I was able to identify 13 other non-Jordanians who, like Sharqawi, were apparently rendered to Jordan from American custody in the years that followed the Sept. 11 attacks. In all likelihood, the actual number of rendered suspects was higher, given the secrecy of the detentions and the enormous difficulties that detainees faced in communicating. None of the detainees whom I learned of had been held after 2004 -- though, again, the secrecy means that a full and comprehensive picture of the detainees and timeline will take time to emerge. There could be many more about whom we do not already know.

Responsibility for the renditions is truly international. While the United States and Jordan are most directly implicated, the countries in which the detainees were originally found are also complicit. Most of the rendered suspects were arrested in either of two places: Pakistan, particularly the city of Karachi; and Georgia, particularly from the Pankisi Gorge. One detainee reportedly said that he was held for three months at a U.S. prison in Iraq before being moved to Jordan, while many others later were held in secret CIA detention in Kabul or at the U.S. military base at Bagram, in Afghanistan.

A pressing question is where these men ultimately ended up. Since the rendered prisoners were not Jordanian, Jordan was a place of temporary detention and interrogation, not a permanent jailer. Even before my trip to Jordan, we knew that some of them -- including Sharqawi -- were now being held at Guantánamo Bay, Cuba. Sharqawi has been held there since late 2004 without ever being charged with any crime. A couple of others are believed to be in detention elsewhere, and at least one is free, but the whereabouts of other prisoners are unknown. It is possible that many or all of the remaining detainees -- which include citizens of Algeria, Tunisia and Syria -- underwent a second rendition, being transferred from Jordan back to their home countries without legal proceedings or any opportunity to challenge such a transfer. The treatment they may be enduring is unknown.

The Jordanian government continues to deny that it ever held rendered detainees. Not long after I received Sharqawi's note, I met with a group of senior Jordanian intelligence officials and put our information to them. My two colleagues and I were sitting on one side of a long conference table; our Jordanian interlocutors were on the other side. It felt like a debate. I did not confront them with the note, for fear that it would be confiscated, but I did mention Sharqawi as an example of someone who had been transferred by the CIA to Jordan. They frowned -- and categorically rejected the idea. Not only had Jordan never detained terrorism suspects delivered by the CIA, they asserted, but they had "disproved" such allegations in the past.

But the note from Sharqawi that I received is more than an allegation; it is tangible and compelling evidence. And the multiple, independent accounts I heard from former detainees are more than just allegations, too -- they form a pattern of consistent testimony. Add to this the flight logs of CIA flights to Jordan, which correspond with the dates of detainee transfers, and a clear picture starts to emerge.

The Jordanians can continue to deny their involvement, and the CIA can refuse to comment, but the fact of CIA renditions to Jordan has been documented. We know that they happened. The key objectives, at this point, are to achieve some measure of accountability for these abuses and to make sure that they don't happen again.