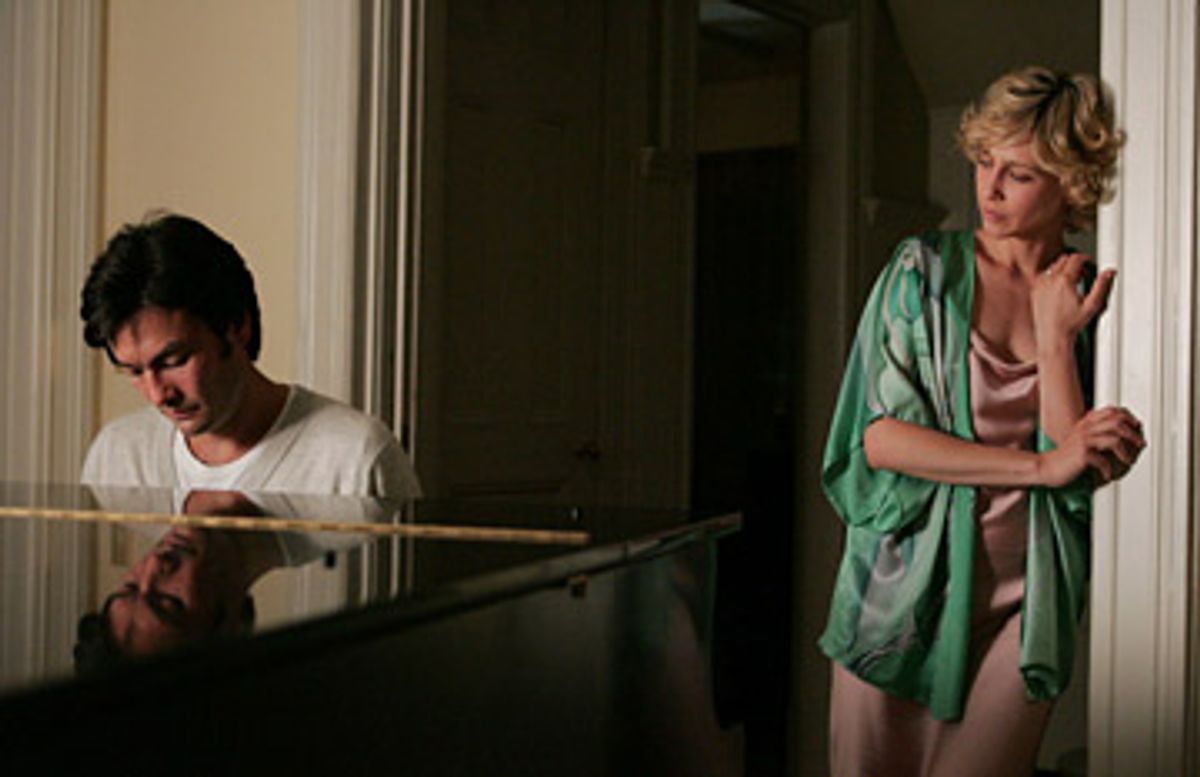 A compelling cross-cultural love story that sneakily blends elements of Lifetime-style domestic melodrama and ambiguous art-house cinema, Gina Kim's "Never Forever" is one of the spring season's unlikeliest and most delectable surprises. A Korean-American director with a critic's-darling reputation, a background in feminist video art and virtually no public profile, Kim cites such relatively highbrow influences as Jane Campion, Krzysztof Kieslowski and Luis Buñuel. But "Never Forever" (which premiered last year at Sundance and then at Cannes) is in no way a cold-blooded intellectual exercise. It's a steamy, erotic tale, and clearly the work of someone who loves movies, especially movies with doomed, damaged, self-sacrificing, lovelorn heroines.

In this case, Kim gets a shattering star turn out of Vera Farmiga, who has long been a distinctive character actress (in "The Departed," "Breaking and Entering" and many other film and TV appearances), but whose odd, awkward beauty isn't quite right for Hollywood. Farmiga plays Sophie Lee, a New York suburban housewife who tumbles into a steamy liaison with a devastatingly handsome Korean immigrant named Jihah (Ha Jung-woo), who works in a Chinatown laundry. Actually, Sophie pays Jihah to have sex with her on the pilled-up blanket of his ramshackle Manhattan apartment, at $300 a pop. If that doesn't sound like much to Eliot Spitzer, it's still a pretty good hourly rate compared to delivering starched shirts.

No, Sophie isn't devastatingly horny, or at least she doesn't think she is. And if she has a fetish for Asian guys, that's already in play: Her husband, Andrew (David Lee McInnis), is a dashing and successful Korean-American attorney, and there's no suggestion that she doesn't love him. In fact, she's getting down with Jihah because she loves Andrew. For unspecified medical reasons, Andrew and Sophie can't conceive a child, and beneath his stylish surface Andrew is sinking into suicidal depression. Sophie has chosen a more scientifically plausible path to pregnancy than her pious mother-in-law's advice, which is to pray fervently for 40 days. (Korean readers, I have a question: What's with the evangelical Christianity? Every other Asian country, pretty much, has stuck with the existing array of Eastern religions. Why was Korea such fertile ground for Jesus?)

Big-eyed and long-shanked, Farmiga displays tremendous emotional nakedness (along with the other kind) as a woman who thinks she knows exactly what she wants and then finds the unexpected force of desire tearing off her skin like an existential can opener. She doesn't want to enjoy sex with Jihah, and she keeps up the façade that it's a painful and unpleasant chore as long as she can manage to. Kim and cinematographer Matthew Clark linger on her face and her form, and what they capture is an anguished, screen-dominating performance partway between Greta Garbo and a wounded deer. Andrew and Jihah are necessarily more in the background, and are closer to being love-triangle archetypes, but neither is a cartoon (and female viewers, I imagine, will find both the James Dean-esque Ha and the model-suave Lee easy on the eyes).

What holds together the pulp of this torn-between-two-lovers fantasy is a restrained and elegant cinematic aesthetic. Kim tells her story both passionately and economically, balancing light and dark -- the portrayal of Andrew's repressed, religious family is both comic and terrifying -- with nary a shot wasted. Although the whole movie's shot through with issues of class and race, Kim never feels the need to drag them to the surface (which only increases their potency). One scene between Sophie and Jihah descends into treacly sweetness, but that was the only moment where I felt Kim placing self-conscious quotation marks around her genre material. As New Yorkers will note, the film is geographically incoherent: Where in leafy suburbia does this couple live, such that they drive through lower Manhattan on their way to church? There's also an improbable pileup of coincidences toward the end of the film, although I think Kim redeems it with her delicate and mysterious conclusion.

Like Kim's last film, the 2003 "Invisible Light," "Never Forever" is a Korean-American co-production designed to appeal to audiences in both countries. (It opened in South Korea last year.) Acclaimed Korean director Lee Chang-dong is one of Kim's producers, and their artistic terrain clearly overlaps. Instead of producing a trans-oceanic mishmash, Kim has made a strange and distinctive new American film. Hardly anyone here will notice, at least this time. But keep your eye on Gina Kim.

"Never Forever" opens April 11 at the Sunshine Cinema in New York, with more engagements to follow.