Protesters felt burned when the city of San Francisco changed the relay route. But one Burmese activist scored against China anyway. 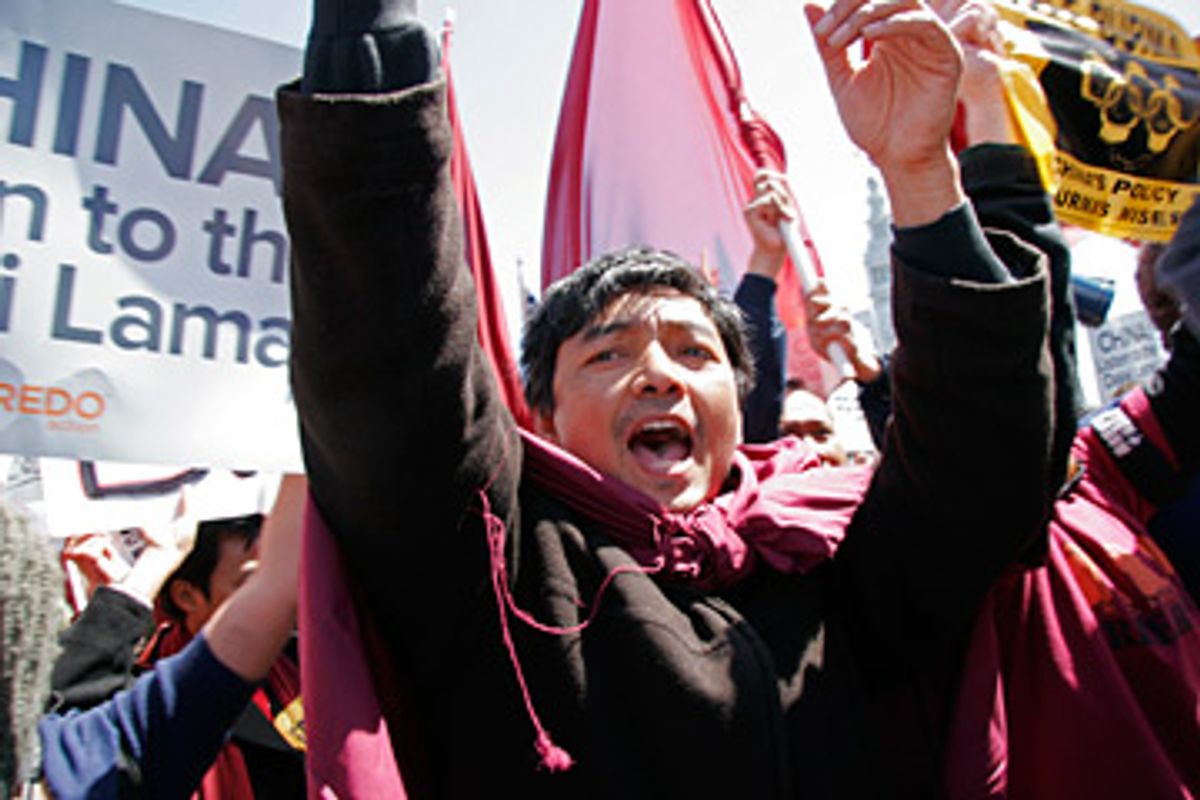 Under the bright noon sun, Nyunt Than, 46, gathered with 100 Burma supporters along the San Francisco Bay waterfront, and waited anxiously for a designated runner carrying the Olympic torch to pass before them. San Francisco is the only U.S. stop in on the torch's world tour in 2008.

Festooned in maroon robes, in honor of the Buddhist monks silenced in Burma, the excited and angry activists wore yellow banners pinned to their robes that read "China's policy = Burma's misery," and chanted, "Boycott the Olympics" and "Free, free, free Burma." "China sells billions of dollars of arms to Burma, while people struggle to live even hand to mouth daily," Than said. Protesting in front of the Olympic flame was his chance to bring Burma's plight to the televised world.

Wearing a robe around his neck like a cape, the charismatic Than caucused with the pro-Burma leaders, plotting how to evade the cops lining the route in front of them when the torch passed. At 1:30 p.m., after the time the torch was scheduled to leave AT&T Park, protesters surged into the street, past the police barricades, marching and chanting, euphoric that they'd evaded the cops, and blocked the torch's route.

Than leapt to the head of the pack, brandishing a toilet plunger, encased in aluminum foil -- a mock torch -- as he pranced with his knees held high, like a cartoon of a runner carrying a torch down the street, with the "Free Burma" throng surging behind him. Quickly, the march dissolved into a teeming mass of flags and signs, with no one going in any particular direction. Soon, the text-messaged word on the street was that the city had changed the route, that the torch and the runners had been put in a bus and driven across town. Thousands of protestors were frustrated and confused, as were the once ebullient China supporters and Olympic fans alike. They came to see the torch; instead they got burned by the Olympics and the city of San Francisco.

"We felt it was in everyone's best interest that we augment the route," San Francisco Mayor Gavin Newsom told the San Francisco Chronicle. "I believe people were afforded the right to protest and support the torch. You saw that in the streets. They were not denied the ability to protest."

Hours before the torch was scheduled to appear, activists had lined the publicized route. Outside of San Francisco's historic Ferry Building, one banner proclaimed: "San Francisco Supports Tibet, Reject China's Propaganda Torch!" Huge Chinese flags furled above a pageantry of tai chi and dragon dance performances. "Another Organic Chef for a Free Tibet" read one protester's sign. San Francisco's Chinese-Americans make up a fifth of the city's population, and they turned out in force, but rumor had it their numbers were bolstered by Chinese-Americans bused in from other parts of the state, such as Sacramento, by the Chinese consulate. A trio of naked men, one wearing only a cock ring, mingled with a mother in sunglasses with a 11-month-old in a stroller all in the support of the same political cause: Tibet.

Than, a green-card-holding computer scientist, who lives in the San Francisco Bay Area town of Albany, with his wife and three children, ages 4, 9 and 12, can smile at San Francisco's famously jocund side of activism. But to him, the China protests are serious. A native of Burma -- ruled by a military dictatorship that buys arms from China -- Than explained that he was a student during the 1988 protests in Burma when hundreds of thousands of civilians rallied for democracy, and thousands of students and Buddhist monks were killed. Than fled the country in 1992 after completing his education in math and computer science. To escape, he had to lie to government officials about his education to get a passport. "If you are a graduate, you are valuable to the country, and you will be shielding the dictatorship," said Than, who still has family back in Burma.

Now, Than is president of the Burmese American Democratic Alliance. He said he would face arrest, torture and imprisonment by the military dictatorship, if he tried to return to his country. His beef with China is the country's ongoing support for the repressive Burmese regime.

"People in Burma have lived under military dictatorship for 46 years, and the dictatorship is getting stronger and thriving because of Chinese support," he said. While the United States has economic sanctions against Burma, also known as Myanmar, China gives the country economic, military and diplomatic support. "While people have nothing to eat, and much of the country is in darkness, the gas is going to the neighboring countries, bringing millions of dollars to purchase arms from China," said Than.

At the Ferry Building, small groups formed to chant against the pro-China demonstrators: "China, China, hear our cry, no more people have to die" and "Shame! Shame! China! Shame!" Among the pro-China demonostrators was Wei Zhou, 33, a Chinese biologist, currently living in Menlo Park, Calif., carrying an American flag and a Chinese flag. She thought that the protesters shouldn't politicize the Olympics: "It's not China's games. It's the world's games," she said, adding, "The Burmese people have to solve their own problems."

Zhou said she was initially suspicious of the money that China had to spend to put on the games, but when she heard her family back in China supported the Olympics, she became a fan, too. "At least it brings a lot of issues to the surface that the government has to pay attention to, like the environment," she said.

As the afternoon wore on, the game among the crowd was: Where's the torch? Where should the protesters go next? No one knew exactly where it was, but they did know that the throngs of people who had turned out to see the torch, protest it, and celebrate it were all missing the show. What if you ran a torch and there was no one there to watch it burn? "It kind of defeats the purpose," said Allyn Brooks-LaSure, spokesperson for Save Darfur, which had more than a thousand demonstrators on the streets. "Why do it if you've got to hide in a suitcase disguised as some granny's luggage?"

Around 2:30, the pro-Burma group amassed downtown, taking over an intersection with their signs, bodies and megaphones, debating their next move. "It's like trying to catch a wind," reflected Than. "It's supposed to come here, but we're not counting on it." He was dismayed by San Francisco's attempts to restrict his right to speak out against China hosting the Olympics.

As he explained, his group, the Burmese American Democratic Alliance, had planned to fly a prop plane over the torch run trailing a banner that said "Free Burma," but the Federal Aviation Administration imposed airspace restrictions forbidding commercial flights over the route for the duration of the event. San Francisco initially planned to limit protests to oxymoronically named "Free Speech Zones," but facing criticism relented to allow protesters to appear along the torch route, as well as in the zones. Then the city simply changed the torch route. "The city is behaving like a police state rather than a free speech friendly one," Than said.

Finally, the Burmese group decided to go to Justin Herman Plaza, where the torch had been scheduled to end up, and a massive TV screen to broadcast its arrival still stood. Crowding into the space with tens of thousands of other protesters and demonstrators and fans, the pro-Burma group never got to see the torch. On the giant screen, they saw only some heroic images of Olympics past, and the regrettable performance of a cheesy cover band, wearing goofy outfits and wigs, singing "Ice Ice Baby."

Waiting in vain for the torch, Than was disgusted with Mayor Newsom. As Than spoke, the sheepish torch was making its way out of San Francisco toward the airport, where a closing ceremony would send it on to Buenos Aires, Argentina. "The mayor is running the torch without dignity, because he is not telling the people where the torch is going," he said. "If you're not going to let the people see the torch, what is the point of running it?" He saw it as a failure for China. "China's purpose is to celebrate in front of the world. They lost that purpose today."