On issues like abortion and sex education, the candidate is neither as moderate nor as principled as some might think. 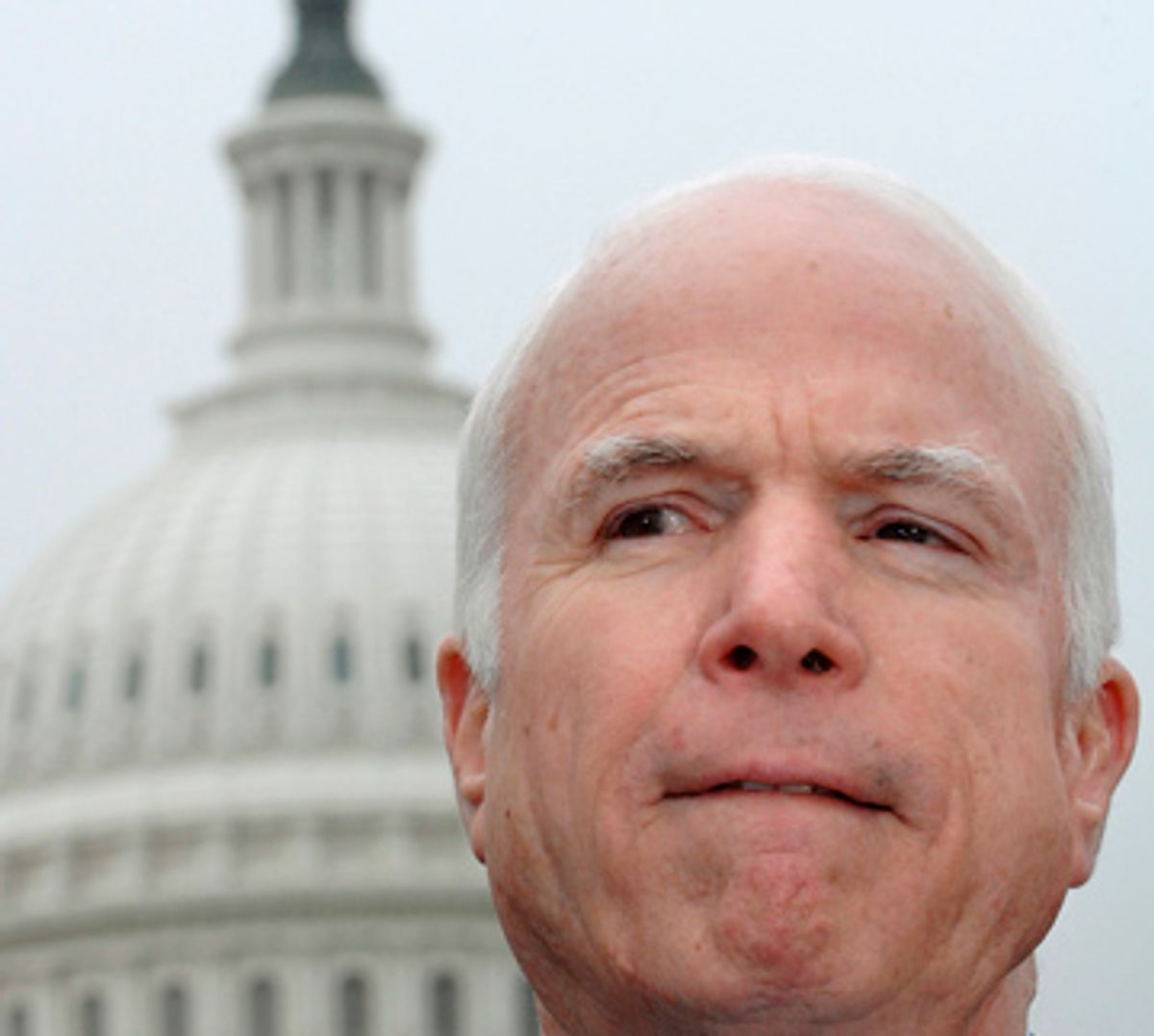 "He's not who you think he is" is likely to serve as the Republican rap against Barack Obama, if and when the inspiring orator from Illinois secures his party's presidential nomination. Yet precisely the same complaint can and should be made against John McCain, who is neither as moderate nor as principled as his publicists in the press corps tell us.

Nowhere is the gap between "straight talker" and pandering faker more obvious than on questions of reproductive freedom and sex education. Usually obscured by his image as a "maverick" Republican and (former) critic of the religious right, his actual record infuriates many women when they learn what he believes -- and how he has voted.

Late last month, the Democratic National Committee released a memo based on focus group interviews with undecided voters in Minnesota and West Virginia concerning McCain. The female voters in the groups were surprised, dismayed and angered to learn that the Arizona Republican not only favors overturning the Roe v. Wade decision and curtailing abortion rights but is also opposed to requiring contraceptive coverage by health plans and favors abstinence-only sex education.

Even women who described themselves as "pro-life" said that the latter positions cast McCain as a man who is "unrealistic," "out of touch" and "stuck in the past," according to the memo. And those same women were especially disappointed because they had expected him to hold the moderate views that the media has so often ascribed to its favorite.

Imagine how disturbed those female voters might become if they read "The Real McCain: Why Conservatives Don't Trust Him and Why Independents Shouldn't," blogger Cliff Schecter's new book exploring the many moods and mind-sets of the prospective Republican nominee. He shows that McCain used to expound sensible centrist positions on choice -- until the senator flip-flopped to please his party's right-wing base. The evidence is simple and devastating.

Schecter quotes an August 1999 speech that McCain delivered to the Commonwealth Club in San Francisco:

"I'd love to see a point where [Roe v. Wade] is irrelevant, and could be repealed because abortion is no longer necessary. But certainly in the short term, or even the long term, I would not support repeal of Roe v. Wade, which would then force x number of women to [undergo] illegal and dangerous operations."

Then he flashes forward to 2006, as McCain prepared for this year's presidential race, when the senator declared that he does not merely favor overturning Roe, but supports a constitutional amendment that would ban abortion in almost all circumstances. Schecter provides another quote, from a McCain appearance last year on "Meet the Press," when he claimed that he has "always been pro-life, unchanging and unwavering." Except when he wavered and changed, of course.

It is possible that McCain feels differently about choice now than he did 10 years ago, and not only because his new stance is more convenient for a candidate who needs conservative votes. Perhaps he honestly cares about reducing the number of abortions. If so, he might want to encourage broad access to contraception and sex education, since he probably remembers what young people tend to do (and what he tended to do as often as possible when he was young and not so young).

On these issues McCain might, in other words, think for himself. Instead he merely parrots the extremists of the far right, who vainly hope to prevent sex but in fact promote teenage pregnancy -- and abortion as well as sexually transmitted disease -- by blocking contraception and sex education. He simply doesn't care about the toxic effect of these policies on young women. He prefers mindless posturing to thoughtful policymaking, as he demonstrated a year ago when he fumbled reporters' questions about condoms, contraception and AIDS, both in Africa and the United States, in a series of startling exchanges on his campaign bus.

Would he support taxpayer funding for contraception in Africa to prevent the spread of AIDS? McCain initially replied that he preferred a program of abstinence education but would provide condoms in places where abstinence "was not being followed," that is, where sex is happening, which is everywhere. That was a stupid answer, which he credited to Sen. Tom Coburn, R-Okla., his ultraright mentor on issues of reproductive rights and health.

Moments later, he wanted to amend his answer. "Let me think about it a little bit ... I don't know if I would use taxpayers' money ... I'm not informed enough on it. Let me find out ... I'm sure I have taken a position on it in the past ... I have to find out my position on it ... I am sure I am opposed to government funding. I am sure I support the president's policy on it." (Whatever! -- as his bottle-blond, Tupac-listening teenage daughter might crack on her campaign blog.)

A reporter followed up by inquiring whether McCain supports sex education that candidly discusses contraception and preventing the spread of AIDS and other disease, or whether he backs President Bush's abstinence-only education program. After a long pause, he said, "I think I support the president's policy." Does he believe that contraceptives help stop the spread of HIV? After another long pause, he replied, "You've stumped me."

That was too bizarre for the startled journalist. "I mean, I think you'd probably agree it probably does help stop it?" Realizing how foolish he sounded, the senator had a ready quip. "Are we on the Straight Talk Express?" Still, he stuck to his muddled answer: "I'm not informed enough on it. Let me find out. You know, I'm sure I've taken a position on it in the past. I have to find out what my position was. Brian, would you find out what my position is on contraception -- I'm sure I'm opposed to government spending on it, I'm sure I support the president's policies on it."

What makes this kind of nonsense so revolting when uttered by McCain is that he so obviously knows better. Who doesn't?

Schecter recounts another appalling episode that occurred last year, when McCain went to South Carolina to give a speech advocating sexual chastity for teenagers -- and to promote abstinence-only education, a policy that has again been proved worthless in a new study published in the Journal of Adolescent Health.

So here is a man who boasts about his hard-drinking, skirt-chasing, macho youth while sanctimoniously lecturing kids about remaining pure. Someday this errant hypocrisy may raise questions he surely would prefer not to answer.