He bowled gutter balls at the rec center, but Obama is picking up points with blue-collar voters in Pennsylvania. 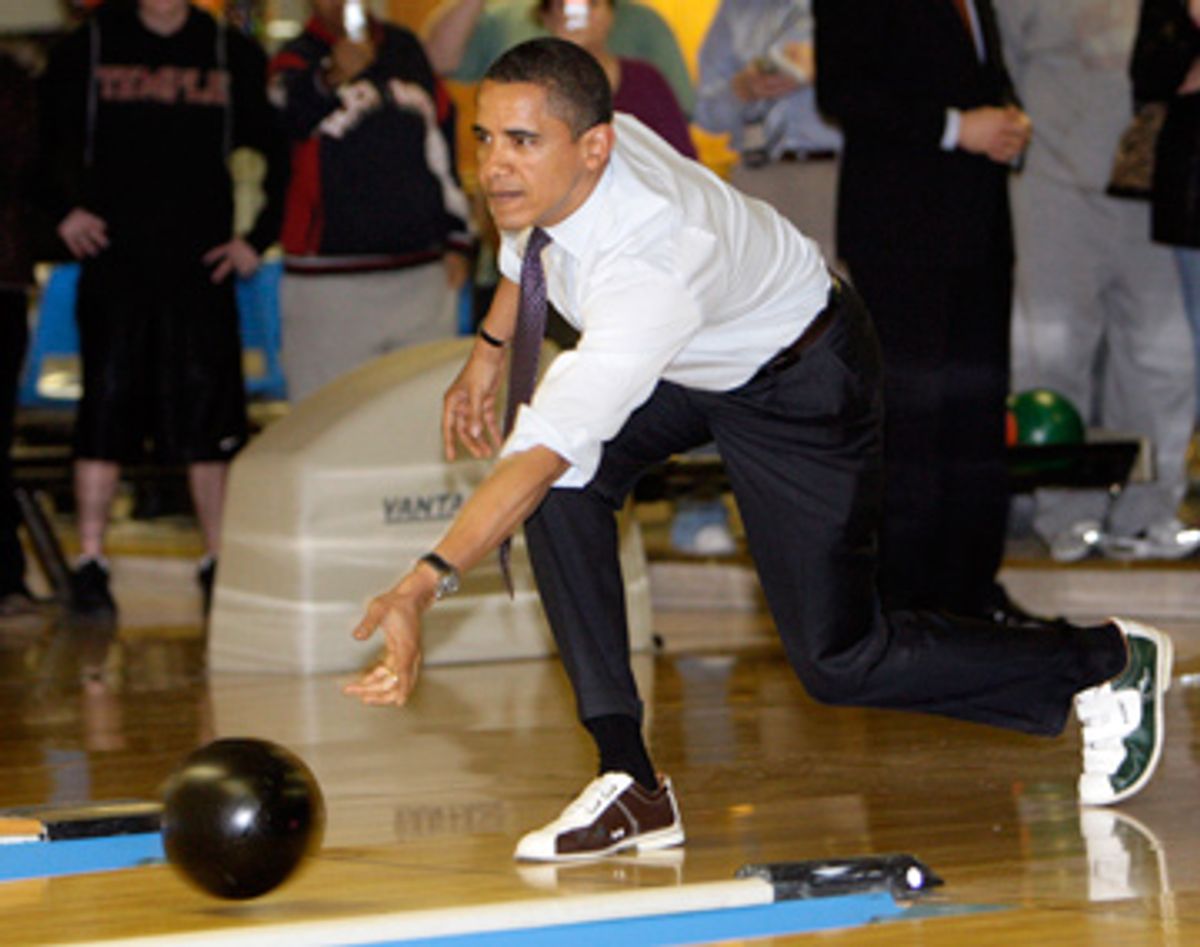 The Pleasant Valley Recreation Center has acquired the patina of a place touched by history -- like, say, the Watergate or Tom's Restaurant, whose façade was immortalized on "Seinfeld." For this is the bowling alley, family-owned since 1947, where Barack Obama's twin gutter balls and pathetic score entered political legend. That bowling misadventure (the original idea had been for the candidate merely to shake hands) was nearly two weeks ago, but Altoona and the Pleasant Valley lanes still seemed an apt place to try to take the measure of Obama's common-man appeal.

Some of the mythology that has come to surround Obama's bowl-o-rama is, sad to say, factually shaky. The candidate did not exactly bowl a 37 as was commonly reported, since the official score sheet shows him with 47 points and working on a spare in the seventh frame at the point when he abandoned the sporting life. (Whether Obama earned that 47 is a more ambiguous question, since an 8-year-old had already served as pinch bowler.) Even more ominous is the potential scandal known as bowling-shoe-gate. As Tony Montgomery, the son of a co-owner who works behind the counter at the 32-lane alley, pointed out, "Obama wore size 12 shoes. I should know, I handed them to him." (Initial press accounts had the candidate wearing an elephantine size 13 1/2.) But, of course, in politics, it is the after-image that counts.

"Of course, it makes a difference -- Obama was in my bowling alley," said Thad Ritter between frames Wednesday evening. Ritter, a computer programmer, is an antiwar Republican who plans to switch parties in November if Obama (but not Hillary Clinton) is the Democratic nominee. Sporting a 210 average, Ritter, whose bowling team is sponsored by Original Italian Pizza, is sympathetic to Obama's deficiencies as a kegler. "I'd be more than happy to give him some lessons on the White House lanes," Ritter said, not having heard that Obama has threatened to replace them with a basketball court. "The fact that he bowled at all was good. It showed that he isn't afraid to be average."

Even though Ritter cannot vote in the April 22 Obama-versus-Clinton primary, which is open only to registered Democrats, his comments touched on a larger truth. He did not claim that Obama, underneath his fame, is an average guy because he, say, chews pork rinds or plays pickup basketball. What Ritter was suggesting was something more subtle -- that though the bowling was obviously a stunt, Obama impressed him with his uninhibited attempt to replicate the average-guy experience.

With its population dwindling to under 50,000 in recent years, Altoona should by all demographic factors be Hillary country in the primary. In this old railroad city in the mountains of central Pennsylvania, family incomes, housing prices, educational levels and racial diversity are all well below the state average. (In past general elections, this area has been reliably Republican. But the final pre-primary figures for Blair County, in which Altoona is the largest city, show that Democratic enrollment has increased by more than 2,000 voters since November 2007, while GOP support has dropped by more than 600 registrants.)

There is a danger in political reporting in placing too much stock in street-corner and restaurant-booth interviews. (The risks of worshipping at the shrine of polls are perhaps even greater.) But still, there are hints that Obama, who is narrowing the gap against Clinton in recent statewide polls, may be tapping into something even here in Altoona, where the 19th century offered more promise than the current one.

A retired teachers' union official, Frank Rosenhoover is the Blair County Democratic chairman and a Hillary supporter, who introduced Bill Clinton when he spoke at the Altoona campus of Penn State last week. Rosenhoover, who is visiting his grandchildren in Texas this week, stressed in a phone interview that demographics are destiny for Clinton in the Altoona area. But then he added, "I'm a little shocked by the breadth of support for Obama. I'm surprised by some of the more seasoned -- I won't call them older -- people who are coming out for Obama."

Wednesday night, Tom Martin, a former two-term Republican mayor of Altoona, was standing on the porch of his 1930s stone home on grandiloquently named Mansion Boulevard greeting the more than 50 Democrats, mostly gray-haired, who arrived for the city's first Obama house party. Martin, who runs a fuel-oil company, described himself as a man who became a Democrat "because my conscience bothered me so much being a Republican." With two young paid Obama organizers (Melissa Byrne, who runs the local office, and Max Lesko, who oversees the region from Johnstown, an hour away) hovering in the background, Martin played host for 90 minutes in his living room in a low-tech evening without video presentations or anything more organized than personal testimonials.

Even with all the passions raised by the primary, there were few overt attacks on Clinton. Although in his opening remarks Martin did claim, "The difference between Sen. Clinton and Sen. Obama is that Sen. Clinton said she will take contributions from corporations and Sen. Obama, if you've seen his ads, will not." His comments echoed Obama's side of the ad wars between the two campaigns. But during the evening, no one pointed out that Martin had badly mangled Clinton's position, since direct corporate contributions to a candidate have long been illegal.

Not everyone at the house party was an Obama acolyte. Tom Russo, who is partly retired from teaching chemistry at Penn State, pointedly announced, "I'm an uncommitted Democrat who is looking for differences between the candidates, especially on abortion and gun control." Lesko, speaking for the Obama campaign, could not help him with his issues checklist. "I don't want to sound like a broken record," Lesko said, "but this campaign is about politics, not policies."

When Obama made his surprise visit here March 29, he also took pains to have lunch at Altoona's Original Texas Hot Dogs (established 1918). During a visit at lunchtime Thursday, I did pick up a whiff of the kind of alien-to-our-way-of-life resentment that Obama's candidacy sometimes inspires. Lori Moschella-Keller, a nurse's assistant, is a registered Democrat who plans to vote for Clinton. Part of the reason: "I have a real problem with Obama saying on the news that his country is so important to him, but he can't put his hand on his heart for the Pledge of Allegiance."

In a sense, the most important political message from Altoona may have been all the topics that -- though they have filled many cable TV hours and newspaper pages -- were not raised. Never did anyone suggest that Clinton should abandon the race because she could not win. Never (and this was a surprise) did anyone sniff that the Clintons had earned $109 million since leaving the White House. And, finally, no one brought up the controversial sermons of the Rev. Jeremiah Wright, Obama's former minister.

But what everyone remembered (including the clerk from the rental car company who insisted on driving me on Obama's route through Altoona) is the candidate who came to bowl ... even if badly.