Where have all the bohemians gone?

Richard Florida has made a career out of explaining the economic importance of the creative class. His latest book is a field guide to their moving and mating habits. 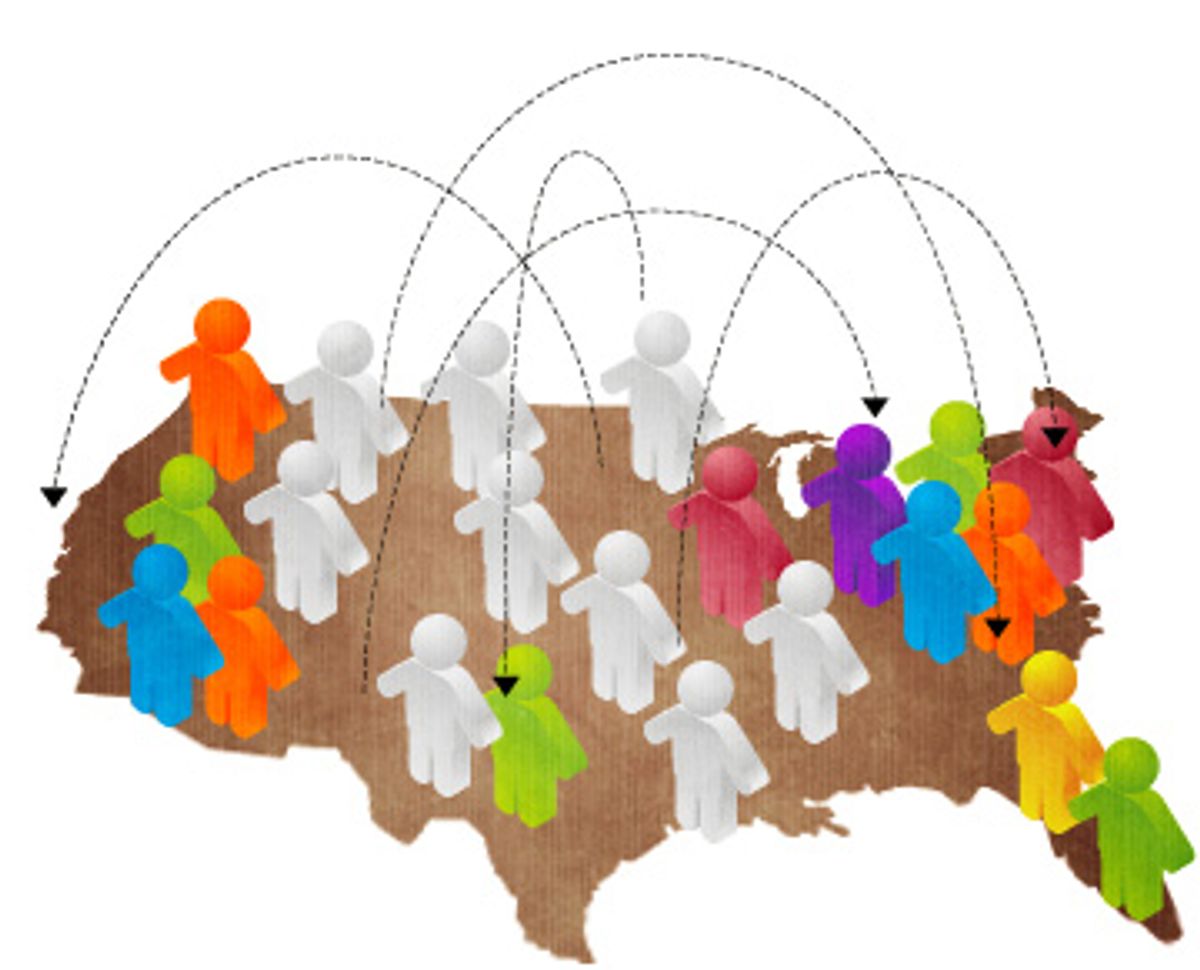 Imagine that you are an insect. A rare butterfly, perhaps, or an iridescent beetle. An economist named Richard Florida has discovered you, and figured out that you can be used to fuel the engines of profit in the world of international commerce. As a small arachnid (or whatever) you fancied yourself immune to the workings of the larger profit-seeking world. You lived modestly, rolling your dung, biting the head off your mate during copulation. But it turns out that you and your kind serve a purpose. Florida picks you up by the back legs and pins you against a display case. This is the experience of a member of the "creative class," as defined by Richard Florida's books on modern economics and sociology.

Florida first cataloged the behavior of this upwardly mobile group, characterized by bohemianism and a tendency to reinvent the workplace, in his 2002 bestseller, "The Rise of the Creative Class." Whereas New York Times columnist David Brooks, then a conservative, had sneeringly dubbed the same demographic "bobos" (bourgeois bohemians) in his 2000 book "Bobos in Paradise," Florida took a different tack. He noted the potential business benefits of open-mindedness, progressive values, and city dwelling, cramming his book with statistical support.

Florida observed that thriving gay communities indicate vibrant creativity in an area. They also have a tendency to prettify borderline neighborhoods -- the technical term, according to "Queer Eye's" Carson Kressley, is "to zhoozh" -- and generate tons of revenue in industries like fashion. None of this surprised many urbanites, though some Americans, unaware of trends in popular culture and oblivious to the Internet, may have been shocked to find that queers and quasi-bohemians do anything other than sin. For an economist like Florida to recognize and quantify the cost benefits of a liberal lifestyle was enough to shock the system.

With "The Rise of the Creative Class," Florida, once a professor at Carnegie Mellon's Heinz School of Public Policy, zhoozhed his career, in part because he defined creativity rather loosely. Clearly we have not yet become a nation of Web designers, filmmakers and hair stylists. Florida generously opened the category to include scientists, healthcare professionals and businessmen, on the watered-down assumption that everyone is creative in some way. More than anything, these non-revolutionary ideas established Florida as the "swami," as Karrie Jacobs put it, of the class he defined.

Since 2002, Florida has turned his eye on the once disenfranchised into a franchise, following "Rise" with "Cities and the Creative Class," "The Flight of the Creative Class," and now, breaking the pattern, a volume called "Who's Your City?" a title whose play on the catchphrase "Who's your daddy" implies, a little too erotically, our submissive relationship to place. But by this point he has stretched his ideas so thin that "The Creative Class vs. King Kong" would do just as well.

Florida intended "Who's Your City? How the Creative Economy Is Making Where to Live the Most Important Decision of Your Life" to be a self-help book. "I wanted to write a book that would actually help people choose the best place to live," he writes. He limits his consideration to American cities, though he has chosen to emigrate to Toronto himself. And that's just one of the book's many problems. Most basically, it's a careless assumption that anyone, least of all a member of the creative class, would need such a self-help book. People who move around freely usually aren't thinking about establishing a career, ambitious people already have a clear sense of where they need to be, and wannabes know but can't get off their rusty dusties and go. Go-getters who don't know what they want to do become lawyers, criminals or something in between. Nobody reads a book to decide where to live. People who can't find work won't pay $26.95 to figure out where to get a job. Anyone who can leisurely contemplate switching cities for work purposes probably has the resources to visit.

Then again, in a world where everyone is constantly connected via electronic media, why move at all? In the course of answering this question, Florida begins "Who's Your City?" by overstating the case that place matters. Business leaders, he reminds us, have espoused the concept of a "flat world" in which place is irrelevant. Theoretically, they say, one can maintain a career in the new creative economy while stationed in Nuuk. Not so, says Florida, because "[t]he ... less obvious side to globalization is the tendency for higher-level economic activities ... to cluster in a relatively small number of locations."

A variety of factors influence the creation areas of high creativity, but they aren't all strictly business related. Concentrating creative industries in certain locations allows people to switch jobs without moving, for instance, and creates diverse, open-minded communities in those places. This increases the draw of, among other things, certain "mating markets," as Florida ickily refers to them.

No one who has searched for an apartment in a desirable city has ever had the luxury of imagining that location didn't matter. Florida puts it more dryly: "The key to our new global reality lies in understanding that the world is flat and spiky at the same time." "Spikiness" -- a term he works hard to turn into a catchphrase -- is the tendency of people in particular fields to cluster in specific locations. Mildly more interesting is Florida's assertion that the world's economic activity occurs mostly in "Mega-Regions," which he defines by using satellite images created by graphic designer Tim Gulden to create maps of areas lit continuously at night. A few of these economic hot spots cross borders. "Tor-Buff-Chester" spans Toronto, Buffalo and Rochester, for example, suggesting that such melding might someday erode national identity.

In contrast to the sharp eloquence and detailed research of his first book, Florida has developed a fondness for clichés, bullet points and long lists. "Urbanites," he tells us, "prize their access to diverse cultural resources such as theaters, museums, art galleries, live music, and vibrant nightlife filled with bars, clubs, and restaurants." So now you know what "cultural resources" means, and "nightlife," too.

If our conventional impressions of urbanites and their cities are correct, one might ask, why read about that for 300-odd pages? A trained rat could match American cities with their respective creative industries. With his research, Florida simply reassures his readers that their presumptions -- that New York is the center of the U.S. financial, fashion and publishing industries, for example, and "Nor-Cal" the center of the high-tech industry -- are absolutely correct. It's almost as good a scam as when Malcolm Gladwell reassures people that snap judgments are good judgments, or when James Surowiecki tells the masses how smart they are (even more so if they buy his book).

Florida believes so strongly in lists, bullet points and surveys that at one point during the book, he and a policy analyst from the Cato Institute map the country in terms of "the five basic dimensions to personality," like a Cosmo quiz turned wonky sociology book. From the "personality maps" this experiment generates, one can tell that people in Georgia are extroverted, agreeable and conscientious, while there's a dark blotch of neurotic people concentrated in the Tri-State area. This might prove something, but only in the way that pointing out that Madonna and Bill Clinton are Leos proves that Leos are egotists.

Presumably Richard Florida now qualifies as a member of the class that he has described for the last six years. It's hard to imagine that his sense of what makes a good argument about this segment of the population has deteriorated so much between 2002 and now. It must be that he feels his audience -- uncreative, closed-minded rural farmers? -- isn't getting the message, and that he needs to dumb down the text and provide more visuals. Reading "Who's Your City?" average citizens and creative-class card members alike will get the same feeling of vexation as the urbanite does when he realizes, upon dropping in to his favorite coffee bar to kick back with a fair trade latte and telecommute on his MacBook Pro via Skype, that the tall coffee has shrunk by 2 ounces and the price has gone up 20 cents.