As experts long warned, Islamic militants steeped in urban warfare against U.S. troops in Iraq have expanded their violent campaign beyond Iraq's borders. 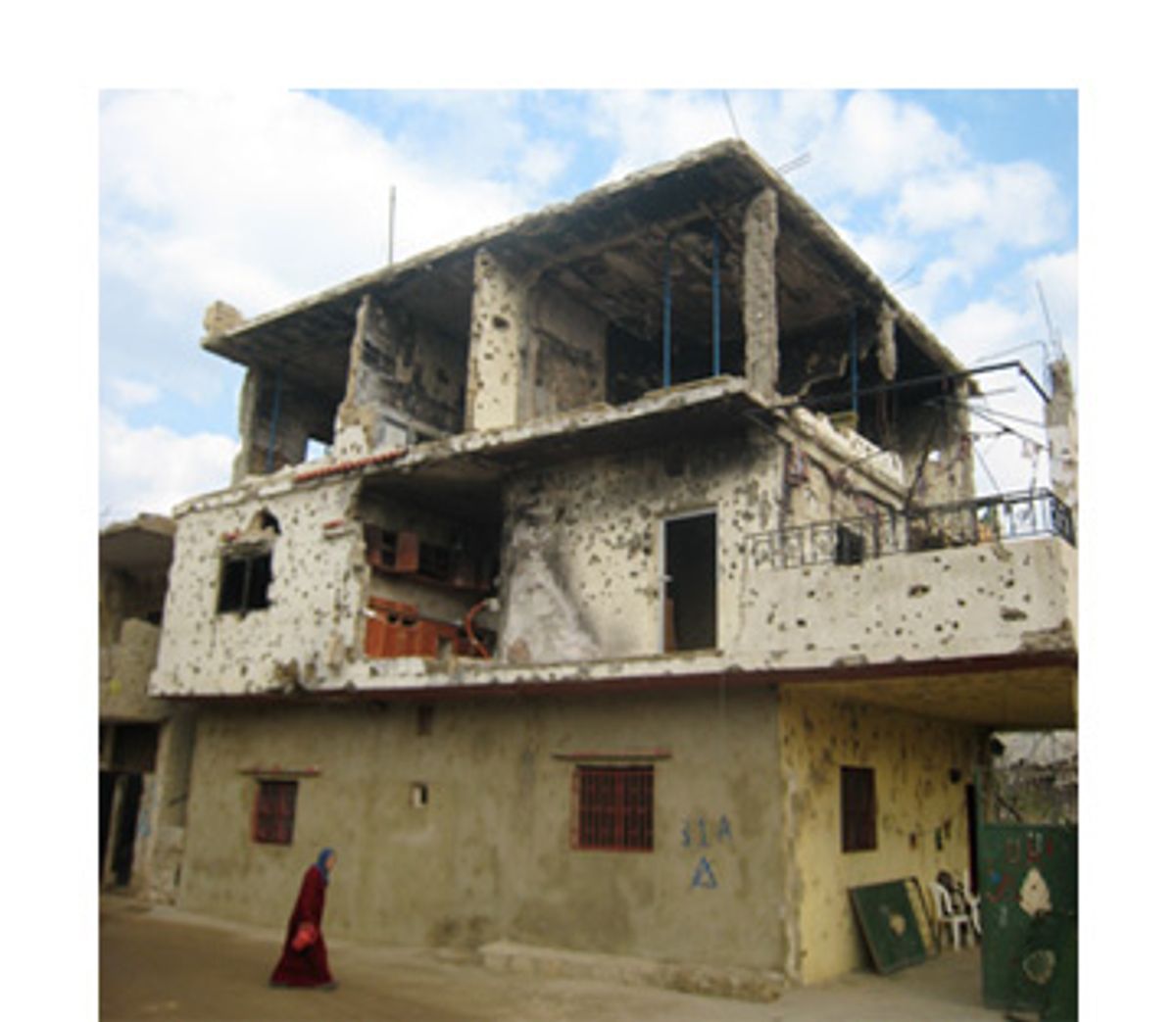 On the outskirts of Tripoli in northern Lebanon, the jagged ruins of Nahr el-Bared rise over the Mediterranean Sea. Once one of Lebanon's largest Palestinian refugee camps and an urban center of more than 30,000 people, Nahr el-Bared today recalls images of Berlin or Dresden from 1945 -- its buildings blasted to rubble from endless mortar and machine-gun fire and its main thoroughfare reduced to a graveyard of hollowed-out foundations and burnt wreckage. Since its founding 60 years ago in the aftermath of the first Arab-Israeli war, when hundreds of thousands of Palestinians fled the nascent state of Israel to neighboring countries, Nahr el-Bared had grown into a modest-size city that boasted one of northern Lebanon's most popular markets. Today, its muddy roads are choked with the skeletons of automobiles, its few scattered residents living in ramshackle garages and shanties, or in the crumbling debris of what were once apartment buildings lining its streets.

Nahr el-Bared's destruction owes much to the spread of militant jihad to and from U.S.-occupied Iraq.

Back in early 2005, Porter Goss, then head of the CIA, warned Congress that the war would spawn a new breed of Islamic militants who would "leave Iraq experienced in and focused on acts of urban terrorism." Middle East experts have long warned that U.S. actions in Iraq would stir up a deadly hornets' nest, with consequences potentially spreading throughout the region. On a trip into ravaged Nahr el-Bared this January, what I saw and heard there confirmed those dark predictions.

Nahr el-Bared, whose name in Arabic means "cold river," was destroyed in the summer of 2007 in heavy fighting between the Lebanese army and the previously little-known Fatah al-Islam -- an al-Qaida-linked group of international Sunni extremists that emerged in Lebanon's Palestinian camps in the aftermath of Lebanon's 2006 war with Israel. The fighting began in May 2007, when Fatah al-Islam militants slaughtered Lebanese soldiers on the outskirts of Nahr el-Bared, prompting a massive military retaliation. In the battle that ensued, the heavily armed and well-funded extremists -- many of whom had come from fighting U.S. forces in Iraq -- managed to hold back the Lebanese military for three months, using tactics they had learned in the urban war zones of Iraq.

"Fatah al-Islam was part of a group that was with Zarqawi in Iraq," says Ahmad Moussalli, an expert in Islamist movements and a professor at the American University in Beirut, referring to the erstwhile head of al-Qaida in Iraq killed by U.S. forces in June 2006. "By virtue of fighting in Iraq, they learned many techniques for fighting a regular army. They were very well trained in urban warfare."

What's worse, adds Hilal Khashan, a colleague of Moussalli's at the American University in Beirut, Fatah al-Islam's fighters may be the first of a new generation of extremists to expand their fight beyond Iraq. Their suicidal stand at Nahr el-Bared could signify the beginning of a new era of international Islamist violence, Khashan says, brought about by an exodus of battle-hardened militants from places like Baghdad, Fallujah and Mosul.

When I traveled to Nahr el-Bared in January, gaining access to the camp was not easy. Since defeating the militants last September, the Lebanese military has proved reluctant to allow any media into Nahr el-Bared, wary of allowing the outside world to witness the extent of the camp's destruction. I had to be sneaked in with a faux Palestinian I.D., and once inside, I was constantly warned that my note taking and photo snapping could lead to my arrest by the military.

With Lebanese soldiers stationed throughout its crumbling ruins, Nahr al-Bared is unique among Lebanon's Palestinian refugee camps; according to a 1969 law, the U.N.-administered camps, established in the wake of the 1948 Arab-Israeli war, are officially beyond the jurisdiction of the Lebanese government. Essentially autonomous, they are controlled by their own indigenous armed factions and are almost completely closed-off from the greater Lebanese society. The Lebanese state, fearful that absorbing its 400,000 Palestinian residents would upset the delicate sectarian balance among Christians, Sunnis and Shiites-- most Palestinians are Sunni Muslims -- has denied them citizenship and bars them from the country's top professions.

Unsurprisingly, the poverty-stricken, desperate camps have become hotbeds of extremism. While radical Sunni Islamism, overshadowed by the activities of the influential Shiite faction Hezbollah, has not played a huge role in contemporary Lebanon, several al-Qaida-esque groups have emerged within Lebanon's Palestinian camps over the past two decades. In Ein al-Hilweh, located on the outskirts of Sidon in the south and the largest of the camps, the jihadist outfit Usbat al-Ansar and its more radical offshoot Jund al-Sham are blamed for several terrorist attacks in Lebanon. And they have built a reputation as the country's go-to groups for militants looking for a way into Iraq to fight alongside al-Qaida. Such is their profile in Ein al-Hilweh as recruiters for the Iraqi Jihad that the main street of the camp has even been renamed "Martyrs of Fallujah."

"Ein al-Hilweh is and will remain a home for al-Qaida in Lebanon," says Khashan. "One can expect extremist groups to have a field day in Lebanon."

Like Ein al-Hilweh, Nahr el-Bared -- religiously conservative and cut off from mainstream Lebanese society -- proved a hospitable home for international militants. When the group first began to move into the camp in late 2006, its residents were initially suspicious of the militants, whose accents, traditional Islamic dress, and often darker skin color were conspicuous giveaways of their foreignness. (Some were so dark, one man in the camp told me, that they could have even been Bangladeshi or Somalian.) The foreign fighters soon began to win their trust, however, as they rented apartments, brought in their wives and children, and largely treated the camp's residents with respect.

The militants, some of them veterans of Iraq, claimed to be setting up training camps in Nahr el-Bared in preparation for further battle against the Americans, and against Israel. Snipers who had learned their trade in Iraq taught others; some of the group's members left the camp bound for Iraq via Syria. Their religiosity and claims to be the protectors of Islam -- even one of Osama bin Laden's sons, Saad bin Laden, reportedly played a leading role in the group -- began to win them converts.

I wasn't surprised to hear that the foreign fighters were treated with fearful respect by many in Nahr el-Bared. Like icons that clutter the walls of a cathedral to whom the faithful plead for intercession, posters of Yasser Arafat, Saddam Hussein and the leaders of Hamas and Hezbollah are plastered on nearly every building in Lebanon's Palestinian camps. Anyone with a legitimate claim to be fighting the United States or Israel will quickly become popular. One young boy that I met in Nahr el-Bared carried with him at all times a red butane lighter, which, besides producing a flame, also beamed an image of Hezbollah leader Hassan Nasrallah in multicolored light.

"There is no Hezbollah in this camp," I was told by one man in Nahr el-Bared. "But people respect them because they fight Israel and the USA. The Palestinians would protect them in this fight."

In lieu of Hezbollah or Hamas, the Sunni Fatah al-Islam militants became the camp's patron jihadists, carrying an additional currency of prestige as veterans of Iraq. The group's leader, Shaker al-Absi, was a close associate of Abu Musab al-Zarqawi's there. Born in 1955, al-Absi was an elder extremist, having fought the Israelis in the 1980s in southern Lebanon. Arrested in Syria in 2002, al-Absi was released after three years and is believed to have gone to Iraq to fight shortly thereafter. After returning to Lebanon, he established a training center in Ein al-Hilweh to send fighters back to the Iraqi insurgency, then became the head of the nascent Fatah al-Islam and moved it north. His group, once ensconced within Nahr el-Bared, soon became the power brokers of the camp, replacing the more mainstream Fatah al-Intifada -- a group that had splintered from Arafat's Fatah in the 1980s and had until then been the most powerful faction in Nahr el-Bared -- and brazenly seized the prior ruling group's offices and weapons.

Not everyone in Nahr el-Bared was happy with the new group's attempts to control the camp, however, and tensions between Fatah al-Islam and the residents of Nahr el-Bared began to increase. Accordingly, the group began to threaten the camp's residents with death if they opposed it. Still, the group's Islamist credentials -- including its members' Iraq war experience -- continued to inspire the respect of many, and given the separation of the camp from Lebanese society, its activities were largely overlooked by authorities outside Nahr el-Bared.

A string of violent encounters between Fatah al-Islam and Lebanese forces in Tripoli in May 2007, incited by a bank robbery by members of the group, forced Fatah al-Islam to refocus its attention from international jihad to fending off the Lebanese military that threatened to drive them from Nahr el-Bared. The terrible toll of the urban conflict that ensued became apparent only after the fighting ended and the camp's residents, the majority of whom had fled to surrounding camps during the fighting, began slowly to return home in October. Almost all lost their homes, which had been blown to bits by mortar fire or riddled nearly beyond recognition with bullet holes. Many rooftops lay littered with nails, which, I was told, had come from nail-filled mortar shells launched into the camp by the army.

"In 1948 we left everything," one resident of the camp told me. "We built a camp, which became a huge city and a huge market. Now we are doing the same thing. We left again, left everything, and we are starting again."

But while the residents of Nahr el-Bared await the reconstruction of their shattered camp, militant Sunni jihadist groups like Fatah al-Islam continue to operate freely in other parts of Lebanon. In March, fighting between Jund al-Sham and the mainstream Fatah group in Ein al-Hilweh led some to fear that a repeat of the Nahr el-Bared devastation could be right around the corner.

Whether or not Ein al-Hilweh erupts in violence, Fatah al-Islam's success in taking over its sister camp to the north and turning it into an active militant jihadist outpost sets a dangerous precedent, as scores of militants cycle through Iraq seeking to continue their fight against the West, its regional allies and Israel, and even their Shiite co-religionists.

"The fate of Islamic militancy throughout the region is largely a function of the ability of the Americans to pacify Iraq," Khashan says. "If Iraq is not won, al-Qaida militants like Fatah al-Islam will sweep throughout the Middle East."

"As long as Iraq is a failed state, the militant Salafi movement will continue to pose a serious security threat to Middle Eastern countries," agrees Bilal Y. Saab, a terrorism expert at the Saban Center for Middle East Policy at the Brookings Institution in Washington. "Fatah al-Islam was one clear example of how the problem of al-Qaida in Iraq could spill over to neighboring countries."

Lebanon, with its disenfranchised populations, swaths of lawless territory and simmering sectarian tensions, may continue to prove a prime destination for veterans of the Iraqi insurgency seeking to expand the conflict outward. If so, Fatah al-Islam may only be the vanguard of a new era of Islamist violence in the region.

James Martin, a writer based in England, is a Paul Mellon Fellow at Cambridge University.