In honor of Charlton Heston, here are 10 lessons we should engrave on our foreign policy tablets as we prepare to leave Iraq. 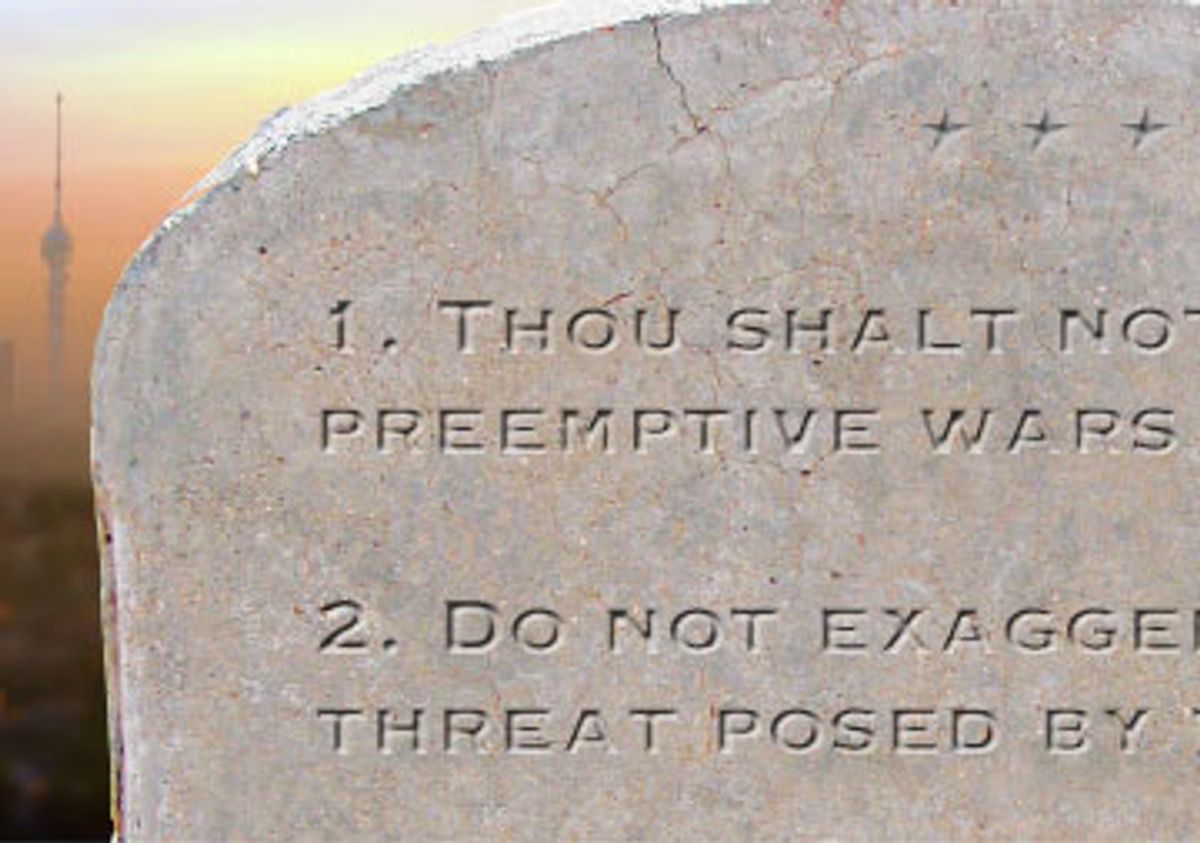 The Iraq war is over. The failure of Bush's surge to produce political reconciliation in Iraq, combined with the unsustainable stress on our military and Congress' unwillingness to keep writing checks for $12 billion a month, all point in one direction: withdrawal. Even if John McCain is somehow elected president -- and for that to happen, there would have to be a near-miraculous breakthrough on the ground -- he too will have to face the reality that this is not the kind of war you win. You just have to decide when you're going to cut your losses.

Bush will face the judgment of history, and it will not be forgiving. But that is not our immediate concern. The most important thing now is to recognize the mistakes that led us into the most disastrous war since Vietnam -- a war that will thankfully cost America many fewer lives than Vietnam, but that has had far worse strategic consequences. If we don't want to repeat those mistakes, there are 10 lessons we must take away from Bush's war. In honor of the recently departed Charlton Heston, let's call them the Ten Iraq Commandments.

Commandment I
Thou shalt not launch preventive wars.

It is immoral and illegal to attack a state that has not attacked you. Dick Cheney's "One Percent Doctrine," which held that America was justified in attacking a foe even if there was only a 1 percent chance it would attack us, violates "just war" doctrine, international law and American tradition. If a deity descended from the heavens and informed the president that a state was about to launch nuclear missiles at the United States, then a preemptive (as opposed to preventive) war would be justified. But no such deity exists (although the devoutly deluded Bush may have thought one did). Corrupted by the Bush administration, U.S. intelligence notoriously failed in Iraq, but intelligence is never going to be reliable enough to justify attacking a state that has not attacked us. In any event, the Bush administration could not even claim that its war on Iraq was preemptive, since it posed no imminent threat. It was a preventive war. And as Iraq has shown, one ounce of preventive war is worse than a ton of cure.

Commandment II
Do not exaggerate the threat posed by terrorism.

Terrorism is a deplorable tactic used by the less powerful to achieve certain goals. It has existed as long as human history, and it will always exist. It can inflict harm, but it does not pose an existential threat to the United States. Declaring war on it is idiotic and self-defeating. Military responses to terrorism kill civilians and breed more terrorists.

As we've seen, Bush's excessive response to al-Qaida's successful terrorist strike only increased the danger of terrorism. A military response to terrorism may be justified, as in Afghanistan, but this is a rare case. And even the invasion of Afghanistan is looking problematic. Police and intelligence work are far more effective. Our moralistic response to terrorism is useless. In a little-recognized irony, the Bush administration was forced by necessity to recognize this in Iraq, magically turning yesterday's Sunni "terrorists" into today's "concerned local citizens." This pragmatic approach should guide our larger strategy for dealing with terrorism.

The only effective way to reduce the threat of terrorism is to work to end the conditions that give rise to it. In the case of Islamist terrorism, this means a comprehensive and enlightened political, economic and diplomatic strategy for dealing with the Arab/Muslim world. Only a tiny minority of the world's 1.2 billion Muslims support radical jihadis, but catastrophic errors like invading Iraq make violent fundamentalism more attractive. Follow the physician's credo: First, do no harm.

Commandment IV
Recognize that not all terrorists are the same.

The foolish concept of "Islamofascism" conflates all Arab/Muslim terrorism. This is self-defeating. Al-Qaida, an absolutist movement with a totalitarian religious ideology, is not the same as Hamas or Hezbollah, which are, respectively, a religious national liberation movement and a complex political party/militia/public-works provider. By treating them all as if they were the same enemy, we create unnecessary enemies and make the task of defeating the absolutists, who actually do threaten us, much harder.

Commandment V
Reject the idea of "a clash of civilizations."

Muslim societies are in many different transitional stages, and they need to be given the space to work out their sometimes painful entry into modernity. Attempting to violently implant democracy or Western values in traditional Middle Eastern societies is like having a plumber do a heart transplant. If Islamist movements take power through democratic means, don't interfere. We prop up autocratic regimes like Egypt's Mubarak because we're afraid that if we don't, the Muslim Brothers will take power. This is a mistake. Exposure to the modern world will do more to moderate Islamist movements than anything we can do, and we will not earn the hatred of Middle Easterners chafing under despotic regimes.

Neoconservative ideology, the pea-size brain that drove the Bush administration Stegosaurus, is a weird amalgam of Wilsonian idealism, historical ignorance, American triumphalism and an Israeli-centric worldview. In practice, what these ideas amounted to was "America must hit the Arabs in the face to teach them a lesson." This was not a good idea.

Special Bill Kristol Sub-commandment VI a
Stop giving these buffoons prestigious jobs on newspaper-of-record Op-Ed pages, top magazines and television shows. They have been completely and consistently wrong about everything. Must we continue to be subjected to their pontifications?

Iran is inescapable -- it's at the center of everything in the Middle East. And thanks to our invasion of Iraq, its bitterest enemy, Iran is now in a much stronger strategic position. Bush is again making threatening noises, but attacking Iran would be insane. Pursuing a diplomatic détente is essential.

As Middle East expert Gregory Gause argued in his recent testimony before the U.S. Senate, the Iranians, who hold most of the cards, will correctly regard a U.S. diplomatic approach as driven by weakness. But Gause makes the key point that engaging with Iran will create a potential showdown between Iran's hard-liners and its moderates. It's in the United States' interest to force Iran to make a choice. Does it want to continue to be a marginalized radical rejectionist state defined by its minority Shiite identity, aligned with two or three small anti-Israeli resistance movements, and buoyed only by the mostly empty goodwill of the Arab/Muslim street? Or does it want to become a major Gulf player, with business and cultural ties throughout the region and the world?

It's true that some hard-line mullahs might choose the first option. But that would only hasten the day when those theocrats quickly assume their rightful place in the ashcan of history. Bush's hard-line approach to President Ahmedinejad and the mullahs has been the only thing holding them up. It's time for a different approach.

This is such a no-brainer that even Bush has paid lip service to it. But it requires more than lip service and impotent American gestures. The next president needs to go in, bust heads on both sides and broker the deal everyone knows is needed: A land-for-peace deal along the lines of the 2002 Saudi Peace Plan or the Geneva Initiative. And yes, this means talking to Hamas. Only the United States has the credibility and the muscle to cut this Gordian knot. Until it does, Israel's long-term viability will be threatened and the greatest source of anti-Americanism in the Middle East will continue to fester. The road to everything in the Middle East runs through Jerusalem and Ramallah.

Commandment IX
Get the media to grow a spine.

The American media's performance in the run-up to the Iraq war was one of the lowest points in its history. Swept up in war fever, the gutless press acted as a quasi-official cheerleader and failed to subject administration claims to elementary due diligence. After 9/11, it was to be expected that large parts of the electorate, and the hapless Congress, would succumb to emotions and the visceral desire for revenge. But the media, which should have acted as the brains of the outfit, abandoned its post and joined in the orgy of uncritical flag-waving. In a contemporary democracy, such a failure has catastrophic consequences. It cannot happen again.

Commandment X
Grow up and join the world.

More than anything else, it was arrogance that led us into this mess. The U.S. National Security Strategy, released on Sept. 17, 2002, summed up the Bush administration's hegemonic worldview, insisting that the United States must maintain military supremacy and had the right to attack anyone we wanted. This is the exceptionalist attitude that led Cheney to cavalierly say, "It's not about our analysis, or finding a preponderance of evidence. It's about our response." This chest-beating, über-patriotic approach, befitting an angry teenager more than a mature adult, has utterly failed. A little more humility and diplomacy, and a lot less stupid self-righteousness, would go a long way to restoring America's sadly tarnished standing in the world community.