Forget the slick mall-punk that rules the radio. If you like your music chaotic and bratty, you need to hear Times New Viking and Be Your Own Pet. 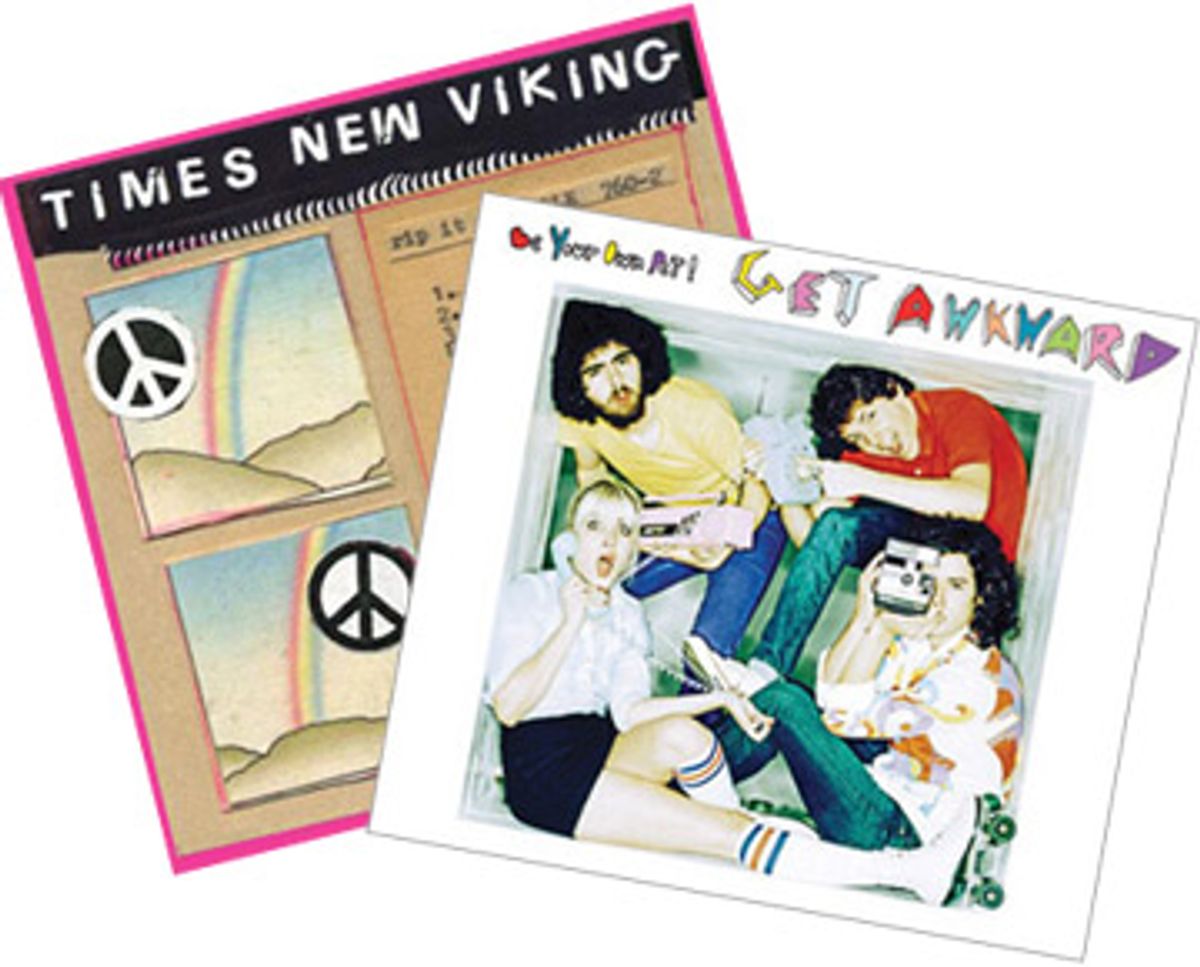 Fans tend to think of indie rock as a reliable source for punky guitar-pop tunes, but how often is that actually the case? From the folkie spawn of early R.E.M., to the egghead electronic jams of '90s post-rock, to the ongoing vogue for neo-psychedelia, indie's just as often gone loose and spacey as short and jolting. Currently, the big names in indie are often the loosest, and the spaciest; indie webzines like Pitchfork routinely bestow their most coveted accolades on artists like the Animal Collective's Panda Bear, whose excellent 2007 album "Person Pitch" featured more bongo drums and wordless hippie chants than power chords. So where does a hard-up punk fan turn when it's hipper to sound like sprawling prog rock vets Yes than one-chord wonders the Adverts?

Not to the radio, though poppy punk bands certainly persist there -- an endless, interchangeable stream of shaggy gentlemen peddling the sound that made Green Day and Blink 182 multi-bazillionaires in the last decade, a sound that's been shorthanded as "mall-punk." Last year's biggest mall-punk band was undoubtedly Paramore, a quartet of barely legal Christians with hook-heavy hits delivered a tempo that suggested dangerous energy drink abuse. But if bands like Paramore and the sightly artier My Chemical Romance are mall-punk at its computer-enhanced best, most of the groups in this genre are more blandly competent than endearingly chaotic. Snotty but sterile, they come encased in a kind of all-over digital gloss that makes listening to a steady diet of the stuff as headache-inducing for many over-20s as consuming a double-glazed album by Disney tween pop superstar Hannah Montana.

So finding the kind of punk that errs on the side of rawness still requires a little digging. But it is possible to locate those sharp thrills buried under indie's recent spate of flaccid folk and go-nowhere noise, to find the kind of bands that restore some of the raggedness that's been pressed out of mall-punk. For instance: Ohio's Times New Viking and Tennessee's Be Your Own Pet, two bands united by unwieldy names and the fact that they've released two of this year's best punk records.

Punk purists will gripe that neither Times New Viking's third album "Rip It Off" nor Be Your Own Pet's sophomore "Get Awkward" truly qualify for the punk tag because they're too arty, too poppy, too whatever. But they'll thrill if you're still juiced by stuff like bore-into-your-brain vocal harmonies and riffs, plus an unruly vibe charged by post-pubescent sexual frustration. Against a glut of too-slick contemporaries, their records sound appealingly like the product of basement sweat and small club grime while still managing to shame many of their peers aiming for MTV in the hook department.

Which is not to say you'd mistake one band for the other. Barely into their 20s, Be Your Own Pet seemingly made it through their awkward adolescences by embracing records (think U.K. first-wave punks the Damned and X-Ray Spex, or even similarly minded U.S. crossover stars like the Runaways and Blondie) recorded almost a decade before they were even born, that moment when the '70s were about to turn into the '80s and bands were still figuring out how punk, new wave and metal might or might not fit together.

Sometimes Be Your Own Pet's beat gets so frenzied that you wouldn't need their first album's lyrical shout-out to the Bad Brains to know they've also heard a few hardcore bands. Most of the time things stay quick but not quite warp speed, guitars throwing off lessons learned from the Ramones, or more likely the legion of bands that copied them. Flubbed notes, sloppy timekeeping, snotty in-studio asides between bandmates -- nothing's wiped clean in a hard drive after the fact. "Get Awkward" offers a big, bright sound, one that treads the line between pro and primitive.

More proto-punk than mall-punk, Times New Viking show off their love for the rougher edges of '60s rock, from the needling electric organs of teen garage bands to the seedy minimalism of the Velvet Underground. "Noisy" is a misleadingly tame adjective for Times New Viking -- sometimes the guitar on "Rip It Off" becomes such a blurry mush of squeals and growls that it's a struggle for the keyboards and male-female vocal tradeoffs to add some desperate melody (or coherence) to the songs. For every sunny, strummed half-tune like "Drop-Out," there's a "Relevant: Now," with a riff that revels in the joys of amp sludge and a shrieking outro worthy of any of America's "pure" noise bands.

And yet catchy the album is, despite sounding like it was made with equipment that most mall-punk bands would have returned to Guitar Center as defective. A dose of humor helps the noise come off as good-natured rather than confrontational, though like their sound, with its debt to '90s lo-fi indie rock, Times New Viking's jokes skew more than a bit collegiate tongue-in-cheek. (For instance, announcing their intentions to poke indie's old guard with a song titled "Times New Viking Vs. Yo La Tengo," their new, decidedly more laid-back label mates.)

The lyrics are worth the effort of picking out from under the fuzz; thankfully Times New Viking's also got a knack for the kind of Pavlovian la-la-la melodies that cut through almost any kind of clatter. You might need the track-listing to realize that line you've been mewling along with all day is "in my heeeeeaaaaaad" on "(My Head)," but a chorus of "I just can't wait to be near you" on "Faces on Fire" comes through loud and clear, charmingly awkward cracking vocals and all.

Lyrics are at least half, or more, of Be Your Own Pet's charm, and you can almost always make them out. Lead brat Jemima Pearl, bleached blond and ego-shrivelingly contemptuous of her peer group (and everything else), writes sardonic teen mini-dramas that end in broken hearts or stabbed faces. On "Becky," the band offers sloppy Buddy Holly licks as a wink to frame Pearl's 21st -century juvenile delinquent who reacts to a two-faced former friend by springing on her with a switchblade outside the lunchroom. On each of the album's 15 tracks, Pearl's boiling over with sarcasm, sneering about failed crushes, jerky classmates, small towns crawling with insufferable squares, and parties full of people too young to already be vapid full-time hedonists.

But that sarcasm shouldn't be confused with ironic distance; when Pearl screams at some nameless boy toy whom she hates him, she sounds honestly pissed off while keeping with the larger-than-life caricature she's constructed across two records, the kind of ass-kicking, take-no-shit avenging angel that every junior high outcast wants to become when her turncoat BFF spills slumber party secrets to the mean girl clique. Unless you're so far out of range that you've forgotten the four-year bad mood that descended on you when you hit high school, you'll grin from ear to ear at Pearl's cheeky exorcisms of suburban ennui. The kind of songwriter who'd base a chorus on a throwaway gag from classic sci-fi satire "Robocop," Pearl is still out for laughs above all else, and the band wants you to hear their lyrics even when they're thrashing away.

The production choices of the two bands -- Be Your Own Pet's clearly enunciated shrieks of delight and derision versus Times New Viking's twee love songs bathed in gravelly feedback -- also correlate with their relative chances for mass success. Times New Viking reacted to signing to the relatively big-time label Matador by seemingly cranking up the volume and distortion every time some blog naysayer worried a higher profile might defang them. The violence of their attack and their disdain for sonic cleanliness will probably confine them to the underground no matter what melodic craft is lurking underneath.

With their acidic take on pop-punk conventions, however, Be Your Own Pet might actually yet make a scruffy army out of all those thousands of tweenage girls Pearl is speaking for -- provided the band finds a way onto their iPods and phones. Perhaps in anticipation of this potential audience, while entirely missing the point of what makes the band great, their label XL recently decided that a few "Get Awkward" songs -- like the aforementioned "Becky" -- are too violent or lewd for younger listeners, relegating them to the album's European edition. (It's an ironic decision, considering that junior high faves Blink 182 used to feature actual porn stars in their videos and that My Chemical Romance write entire concept albums about dead lovers.)

Stronger bands than these have wound up with their edge blunted in pursuit of radio spins; maybe it's best for all of us if Be Your Own Pet sticks to the margins so they can continue sticking up their middle fingers.

Jess Harvell is a freelance writer living in Baltimore.