Bitter as hell in Pennsylvania

Folks agree with Barack Obama in at least one Pennsylvania trailer park. But will angry voters help or hurt Democrats in swing states this fall? 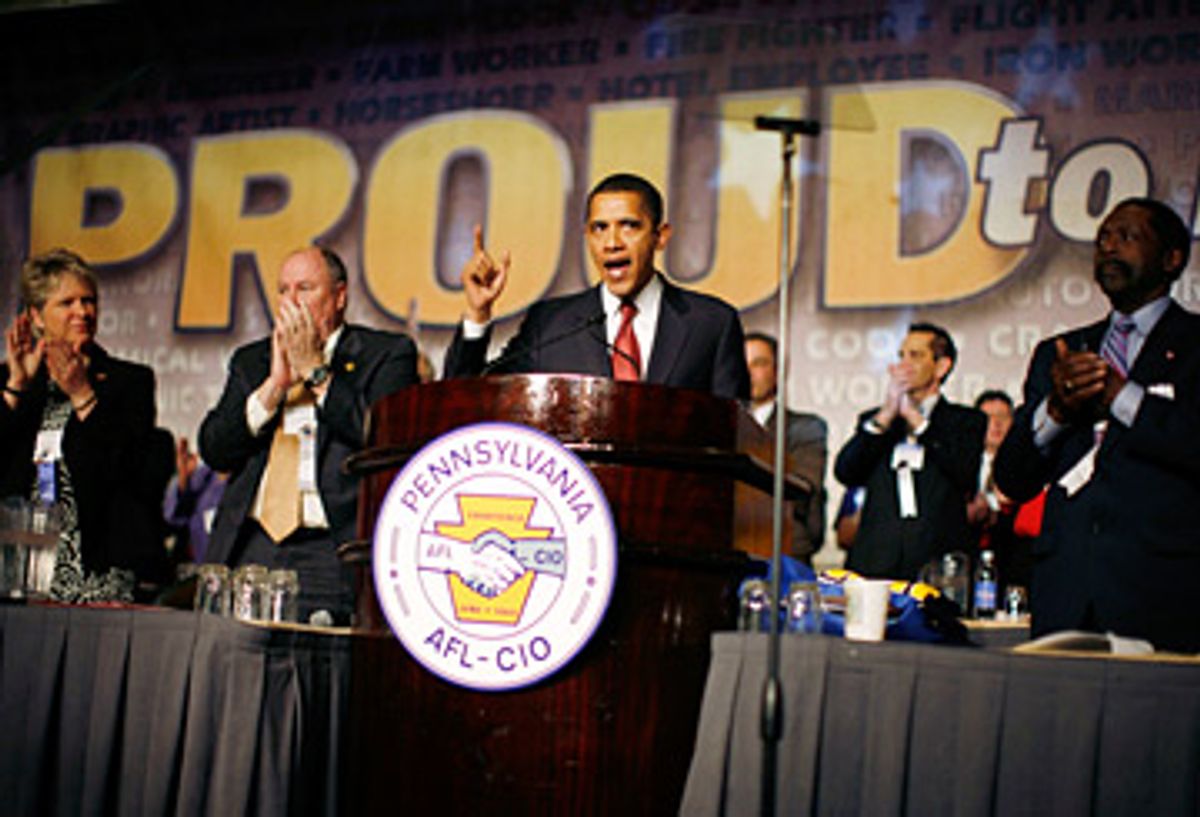 Shawn Erfman lives in a trailer park, listens to Rush Limbaugh and voted for George W. Bush -- twice. Over the weekend, he heard all about what Barack Obama had to say about "bitter" Pennsylvanians like himself. And he's mad as hell.

Not at the guy you might expect, though. "It's fucking true," he said Monday night. "Everybody's bitter for one reason or another. So they're crucifying him because he spoke the truth? Cause he's not saying something that's going to suck up to people and kiss ass? Because, what, he slipped and accidentally spoke the truth, instead of kissing butt?"

A 37-year-old mechanic for a construction company, Erfman won't be voting Republican this time around. While he isn't a registered Democrat and can't vote in next week's primary, he'd be happy to go for Obama in November. (Or Hillary Clinton, for that matter.) "I do like him, I think that he would be a change," Erfman said. "Believe it or not, I voted for Bush. See where that got me?" But when you get right down to it, Erfman -- like many of his neighbors -- doesn't see much chance of any politician really doing a lot to help the dwindling middle class in northeastern Pennsylvania. "It doesn't make a difference who I go vote for, whoever gets in is going to see fit to try to make it go their way," Erfman said. His wife, Heidi, felt the same way. "Can I vote for Mickey Mouse?" she asked.

By the time Obama and Clinton sit down for Wednesday night's debate in Philadelphia, the question of whether people like Erfman were insulted by Obama's remarks at a San Francisco fundraiser will have dominated nearly a week of news about the campaign. White working-class voters -- the ones Obama said "get bitter" and "cling" to guns, religion and nativism -- are, without a doubt, the key to winning the Pennsylvania primary next week. If Clinton holds on to a big share of the blue-collar Democratic vote, as she did in Ohio last month, she'll win, as polls show she's on track to do.

But they're also the key to November's election, which means this won't be the last you hear about bitter Pennsylvanians. Either Obama or Clinton will have to keep John McCain from trouncing them among white working-class voters (as Bush did to Democrats in the last two elections) in order to win Rust Belt swing states. The first step could simply be convincing those voters, after years of hard times, that it's worth paying attention to either side. If Democrats are going to take back the White House, their biggest enemy might not be whatever Obama says to California donors next. The biggest hurdle might be bitterness itself.

"I'm just not crazy about politics," said Mary Perno, 47, an apprentice baker who lives around the corner from the Erfmans. She hasn't voted since backing Ronald Reagan in 1984 and doesn't sound like she'll get around to trying it again any time soon. "Most of the politicians that I've known in my life are nothing more than liars, and I don't like liars." That was a common sentiment in Exeter, which sits between Wilkes-Barre and Scranton in what used to be the heart of Pennsylvania's manufacturing and coal country. No matter who was in power, factories kept closing or moving offshore, mines kept shutting down or laying people off and wages kept sliding down. "None of 'em ever do anything," said Perno's neighbor Tom Sciandra, a heating and plumbing repairman. "All they do is yap a lot."

So while Obama and Clinton fight on, some of the eventual winner's allies are already trying to reach blue-collar voters for the general election. The AFL-CIO, which will surely endorse either Democrat over McCain, is focusing on communities like Exeter through an offshoot called Working America. Essentially, it's labor's attempt to organize people in 10 swing states who would have belonged to unions a generation or two ago -- when they would have worked higher-paying jobs with better benefits -- but don't now. The goal is to get these people, largely whites from exurbs and old inner suburbs, thinking about how different government policies could change their personal economic situations -- and voting for the candidates the AFL-CIO thinks would help. (Translation: Democrats.) Over the last four years, the group has signed up 2 million members around Pennsylvania, Ohio, Minnesota, Michigan, Wisconsin and other big industrial states where the election is likely, once again, to pivot. Once they join, members get plugged into the AFL-CIO's massive database for targeted mail, phone calls and return visits closer to the election. As a result, organizers say, members turn out to vote almost as reliably as actual union members do. Among registered voters who joined Working America, 70 percent voted in Ohio's 2006 election, compared to 75 percent for voters represented by AFL-CIO unions (and 51 percent for people who weren't members of either). While only 38 percent of Working America members in Ohio identified themselves as Democrats in 2006, 58 percent of them supported Ted Strickland for governor. The AFL-CIO calls it the biggest get-out-the-vote operation no one's ever heard of.

Knocking on doors in Exeter Monday night, Working America canvassers found a lot of people who were resigned, at best, about politics, but nonetheless eager to join a group that promises to help them press politicians for better healthcare and local jobs. "Whatever you're doing, it's a bad time," said Tom Langhorne, 53, a truck driver, when canvasser Patricia Penton arrived on his porch. But a few minutes after Penton told him she wanted to talk about jobs leaving Pennsylvania, Watson had signed up as a member and offered up $7 to help the cause.

Of course, in recent years the sidewalks in swing states have been crammed with bright-eyed organizers from groups claiming they could pull off a Democratic victory; the best-known, America Coming Together, burned $10 million of money from unions and George Soros on Election Day four years ago, only to see Bush rack up the biggest popular vote total in American history on the way to beating John Kerry. It shut down soon after (but not before federal election officials fined it three-quarters of a million dollars for illegal fundraising). Working America officials say they've got a much better sense of who their members are and how to reach them -- they have phone numbers for 89 percent of them and know what kind of work 88 percent of them do -- and think they'll have better luck.

The good news, for whoever winds up with the Democratic nomination, is they may be able to lose the white working-class vote and still win the election. A recent paper by sociologists Ruy Teixeira and Alan Abramowitz for the Brookings Institution estimated that Obama or Clinton needs to hold the Republican margin among white blue-collar voters to around 10 percentage points, instead of the 23 points Kerry lost by. In key states like Pennsylvania and Ohio, a Democrat would have to keep it much closer to win. (In West Virginia and Kentucky, the candidate would need a majority.) "These voters have gotten nowhere under the Bush administration, and they're pretty aware of that," Teixeira said in an interview. Whether they decide to give the Democrats a shot as a result could determine who wins.

Which is why those small, "bitter" blue-collar towns will wind up mattering again a few months from now -- whoever wins over a relatively small share of swing voters could be the next president. Expecting to face Obama in the fall, McCain's campaign is already planning to remind people, again and again, of this week's controversy. McCain also sent out a fundraising e-mail about Obama's remarks -- as did Obama, defending himself against attacks from his rivals. Clinton, for her part, has an ad about it on Pennsylvania TV stations. But if enough people are angry enough about how bad the economy is, it might not matter how you talk about their problems -- as long as you talk about them.

"Bush gave Republicans a bad name," said Sciandra, 46, the repairman. A veteran of six years in the Marines, he voted for Bush in 2000 but supports Clinton this time. If McCain can't win him over, it might be a bad sign. Sciandra said he understood what Obama meant, and wasn't offended by the idea that he "clings" to guns. "I hunt, I fish, I love the outdoors," he said. "Me, I tell you, I'm not worried about anybody taking my guns ... I think it just came out the wrong way." As for Erfman, he's more worried about healthcare than his job. His 60-year-old mother-in-law, Iona White, just moved in with his family so she could get onto their health insurance. A lifelong Democrat, White says she'll vote for Obama next week. "It's a bad time in the world," she said. "People are bitter."