Obama and Clinton fizzle in Philly

Wednesday's debate was devoid of substance and rife with gotcha politics. In the end, Obama seemed to win simply by not losing. 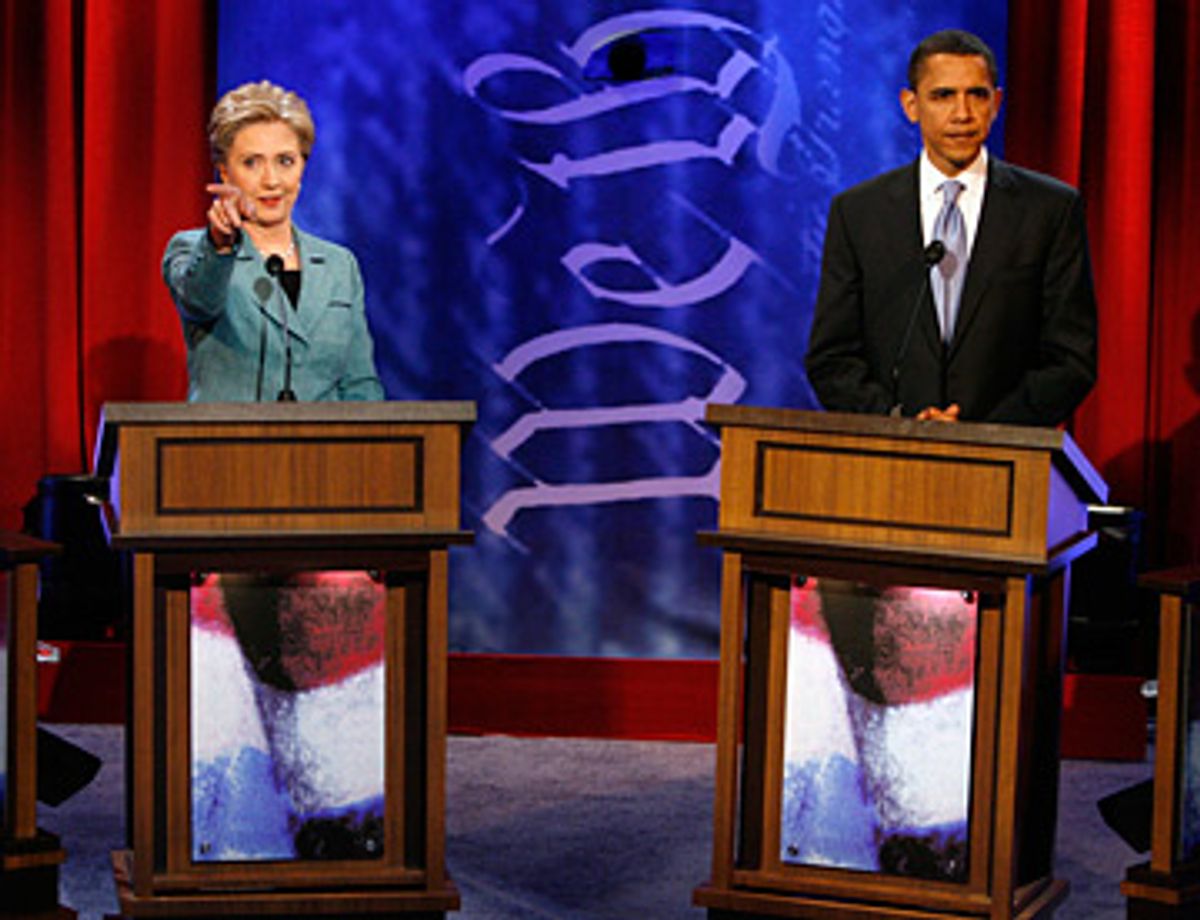 This is the way it ends, not with a bang but a whimper. If Wednesday night's fizzle in Philly was indeed the last debate of the Democratic primary season between Barack Obama and Hillary Clinton, it will be remembered for, well, not much of anything.

Broadcast to a prime-time network audience on ABC and devoid of a single policy question during its opening 50 minutes, the debate easily could have convinced the uninitiated that American politics has all the substance of a Beavis and Butt-Head marathon. If the debate was a dress rehearsal for the Oval Office, then the job of a 21st-century president primarily consists of ducking gotcha questions. As Obama rightly complained, deflecting a fatuous question about his seeming reluctance to don an American-flag pin, "This is the kind of manufactured issue that our politics has become obsessed with and, once again, distracts us from ... figuring out how we get our troops out of Iraq and how we actually make our economy better for the American people."

This was not an evening that will shimmer in Obama's memory book. Facing a new-guy-on-the-block hazing from moderators Charlie Gibson and George Stephanopoulos, Obama at times displayed a whiff of petulance at the steady assault of questions about the controversial sermons of his former minister Rev. Jeremiah Wright and his Chicago social connection to Bill Ayers, a semi-unrepentant alumni of the Weather Underground. Clinton, who faced her own credibility challenges over her hyperbolic description of her wartime visit to Bosnia, seemed content to take refuge in her mantra about her "16 years of being on the receiving end of what the Republican Party dishes out." Her unsubtle message: I am the only one on this stage who can take it.

But with the April 22 Pennsylvania primary less than a week away, Obama won the debate by the simple act of not losing. While divining the reaction of channel-flipping Democrats to a debate is a tricky business, there did not seem to be a moment that would magically transform the contours of a race in which Obama has long been the odds-on favorite. With the Obama campaign balking at the chosen date for another debate before the May 6 primary in North Carolina, it is likely that never again will so many voters watch the two candidates on the same stage until the Denver Convention.

Maybe it is just as well that these over-hyped battles behind dueling lecterns should come to an end after 22 (count them!) Democratic face-offs. Even though the candidates had not debated since Feb. 26 in Cleveland (another date that has been etched in history), they could not muster a single new argument between them. It would be one thing if this prolonged race were a titanic clash of ideologies or a desperate struggle for the soul of the Democratic Party. Instead, either candidate could have easily given Clinton's answer on Iraq: "So the bottom line for me is: We don't know what will happen as we withdraw. We do know what will happen if we stay mired in Iraq." In short, Obama versus Clinton has become a variety show without the variety.

After the debate, the roving Clinton team on spin patrol was making the case that the assault on Obama's personal background in the first half of the debate was a preview, should Obama become the nominee, of the go-for-the-jugular Republican campaign in the general election. Meanwhile, the Obama camp was pointing out how unlikable Clinton appeared when she went on the attack. (In regard to Rev. Wright, for example, Clinton sniffed, "You don't choose your family, but you get to choose your pastor.") The problem facing the Democrats is that there is political validity to both arguments: Obama may find himself on the defensive over Wright, Ayers and the rest, while Clinton's negative ratings in the polls are climbing as the campaign drags on.

Oddly enough, Wednesday night's debate may have more lasting significance if either Obama or Clinton is elected president than it did in helping sort out the primary field. Pressed by Stephanopoulos to make a "read my lips" no-new-taxes-on-the-middle-class promise, both candidates took the bait. Clinton expressed this Republican-esque promise in unequivocal terms: "I am absolutely committed to not raising a single tax on middle-class Americans, people making less than $250,000 a year." Obama eagerly joined in this bidding war, saying, "I not only have pledged not to raise their taxes, I've been the first candidate in this race to specifically say I would cut their taxes."

This is not to argue that the formula for Democratic victory is to become the party of tax hikes for hard-pressed voters. But read-my-lips pledges are the stuff of GOP anti-tax crusaders like Grover Norquist, not of a Democratic Party committed to increased domestic spending and fiscal responsibility. It is easy to envision circumstances in which either Clinton or Obama as president might enact a tax increase that would affect some families earning less than $250,000. During the debate Clinton, in fact, pointed out that Obama's willingness to consider raising the current $97,000 ceiling on paying Social Security taxes was tantamount to a violation of this promise.

Of course, it is folly to believe that anyone notices the policy arguments in a high-stakes debate late in the political season. The problem is that most debates are judged on the basis of their sound bites and searing emotional moments. And Wednesday night, the Philadelphia finale flunked both as drama and as intellectual nourishment.