"She's not as bad as you think"

Hillary Clinton showed off her softer side in the Philly burbs with witty advice on how to sell herself to undecided voters. 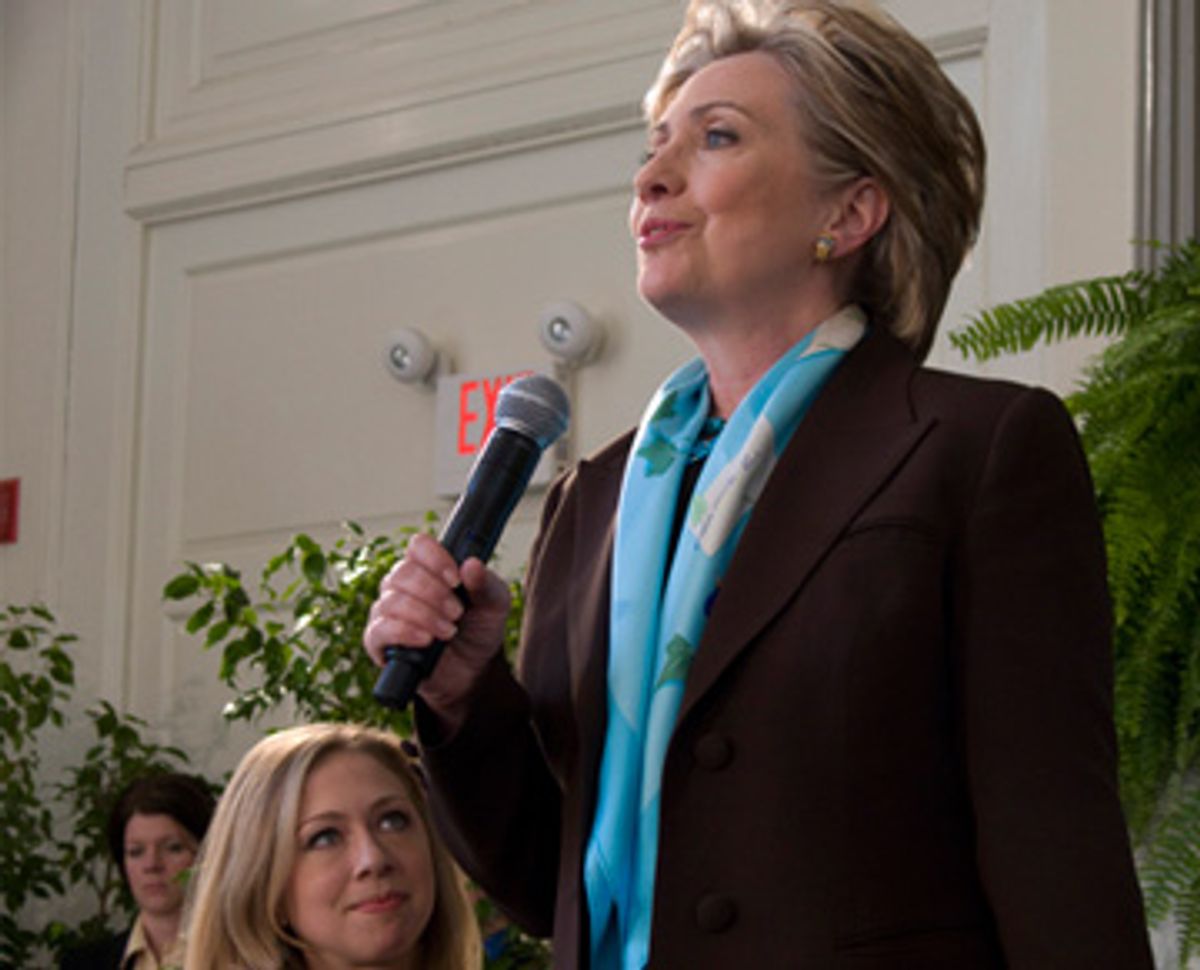 This was the Hillary who does not neatly fit the glib stereotypes about her killer instincts, her on-message political discipline and the humorless style of a trusts-and-estates attorney. When a male supporter in the audience at Haverford College asked for advice about how to persuade undecided voters as he canvassed his neighborhood, Clinton cracked, "Knock on the door and say, 'She's really nice.' Or you can say, 'She's not as bad as you think.'"

Comments like this may be partially contrived, since 15 months into a grueling presidential campaign total spontaneity has become as alien a concept for all candidates (yes, that includes Barack Obama) as relaxed, alarm-clock-free sleep. But Clinton's words also displayed a light touch in joking about her political negatives. In a Democratic race devoid of sharp issue distinctions (a decision made by Clinton and Obama, rather than merely imposed on the voters by the media), such imagery matters in Tuesday's Pennsylvania primary.

Put Clinton in an upscale suburb, surrounded by college students from elite schools like Haverford and Bryn Mawr, and the former first lady almost naturally gravitates to musing on the modern history of feminism. Hillary was in the midst of punctuating a you've-come-a-long-way point -- about how women in the workplace in the 1970s were advised to hide any hint of a personal life for fear of seeming frivolous -- when she paused to make a startling revelation.

"I'm addicted to advice columns," she declared, offering a confession that probably would stun everyone from psycho-biographers like Gail Sheehy to, well ... psychos like Ann Coulter. "In my next life, I'll be an advice columnist."

The presidential candidate was not exactly envisioning herself as a modern-day Miss Lonelyhearts or even an Oval Office version of Ann Landers. (Relax, this is not a setup for a bad joke about the Clinton marriage.) Rather, Hillary's area of specialty seemed to be the career dilemmas facing modern women. She provided a hint of her opinioned style when, out of nowhere, she began lamenting "those dress-for-success advice columns ... [calling for] navy blue skirts with white blouses and ribbons tied in a bow around your neck. [It was] so terrible that we ever wore anything like that." For the record, the two-term New York senator wore a brown pantsuit accented with a turquoise scarf.

It is tempting to imagine how Hillary Clinton in her next life as an advice columnist might respond to a letter like this:

Dear Hillary: I am in the unusual position of applying for a major executive post that my husband once held. My problem is not doing the job (even our adult daughter says that I would be better at it than her father), but getting it. I thought I had everything arranged, but it has all slipped away from me. Another candidate -- younger, more charismatic and male -- is now strongly favored, according to the office grapevine. There are a few regional offices still to be heard from (Pennsylvania, in particular), but even I can see the handwriting on the wall. Do I risk humiliation by clinging to my long-shot hopes? Or do I downsize my ambitions in recognition of the harsh realities of office politics?

Dear Day-Dream: Go for it! Keep working, keep smiling, keep hoping and never admit that you feel vulnerable. Also -- and trust me on this one -- stop listening to Mark Penn.

In reality, that is close to the Clinton strategy. Her hope in Pennsylvania is not merely to win, but somehow to find a victory formula that will carry out to other states still on the primary calendar like Indiana and North Carolina (May 6). That is why merely replicating her 54-to-44 percent margin over Obama in the March 5 Ohio primary would not, in itself, probably be enough to change the quixotic aura now surrounding her candidacy. What she needs, in part, is to recapture some of the African-American vote, which went for Obama by a ludicrous 87-to-13 percent margin in the Ohio exit polls. Since at this late stage Clinton is on the short end of a contest for convention votes, she cannot, for example, afford an 8-to-1 delegate wipeout in the 60 percent black Center City Philadelphia congressional district of Obama supporter Chaka Fattah.

Clinton's strongest local supporter is reform Mayor Michael Nutter, elected last November to an office once held by Frank Rizzo with the help of the first winning biracial coalition in Philadelphia history. In an interview in his City Hall office last Wednesday afternoon, just before he headed to the debate, Nutter said, "Once you get past all the excitement and razzle-dazzle of race and gender, [voters] still want to know 'How are you going to fix this? What are your ideas? What are you about? What kind of person are you?' And that was the story of our race last year." But Nutter had the luxury of running in a five-way Democratic primary, which meant that he could prevail with 40 percent of the black vote and 37 percent of the white vote.

There are still moments when the Clinton high command appears to believe that lowering expectations is part of their comeback crusade. During a Thursday morning conference call with reporters, deputy communications director Phil Singer stressed the "record-breaking, eye-popping extraordinary spending by the Obama campaign" in Pennsylvania. All that is true -- and the Clinton campaign estimates that it will be outspent in TV advertising 2-to-1 in the primary's final week. But unless Clinton wins Pennsylvania by a hefty margin, all the spin-doctoring in the world will not slow the rush of superdelegates to Obama.

But even though all the math favors Barack Obama, the Illinois senator is still roughly 400 delegates shy of a convention majority. Hillary Clinton still boasts the three ingredients that an underdog candidate needs in order to continue in presidential politics: money for television, loyal local supporters and a large traveling press corps. She also has something that's perhaps even more important -- a refusal to take no for an answer in what she called Thursday "a very long extended job interview that has gone on for 15 months."